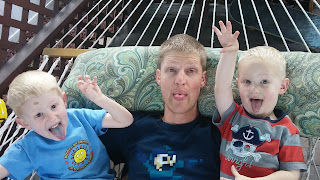 Man! We've been enjoying the beautiful weather lately. 70-80 degrees is my favorite temperature, and it's been the perfect May in that aspect. I always try to hold out on the AC until June, and I don't think this year will be a problem at all. 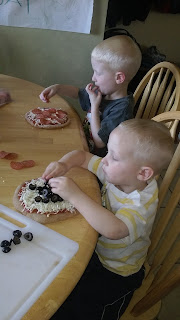 Dustin has gotten back into the potty training groove over the past week. Since we went out of town camping he has had a hard time, so we have been bribing him hardcore. First if he had 5 days of no accidents he got an ice cream party. He got to pick the flavor and toppings from the grocery store. This week if he went all week without accidents we had a pizza party with whatever toppings he wanted.

Friday we had our pizza party! I made everyone individual pizza crusts and we decorated our own with whatever we wanted. Dustin had an entire can of olives (he shared a little with Dave, but he really ate most of them). Logan had just pepperoni. I had hawaiian and Dave had half cowboy, half bbq chicken. It was fun! We'll probably do it again just because. So we've stopped the bribing and hopefully he will stay on track with the potty training (at least until we have a baby).

Saturday we worked in the yard all morning! Our garden is planted, the drip lines are laid down, the hammock is on the gazebo and the weeds have been pulled from the flower beds. So we're off to a good start. I've been spraying dandelions this year, and we have almost all of them eradicated (much to the boy's sorrow). Now all we have to do is clean off the gazebo and we'll be ready for summer! 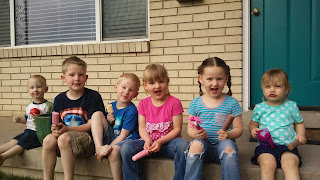 That night we also had a family dinner with Dave's side of the family. The boys had fun playing with cousins and the weather was perfect to just hang out outside. 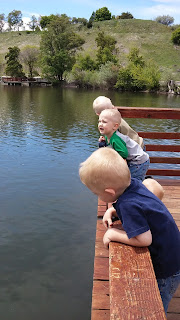 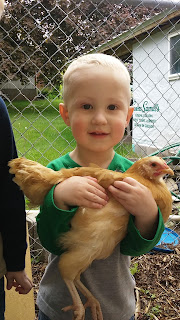 Monday we had a fun day! My friend RiKelle moved a few months ago, so the boys and I took the day off to go visit her. She now lives in the country so the first hour and a half or so we spent outside in their yard chasing around their chickens! The boys had a blast. They had three different color chickens (brown, black and white) and each boy, along with RiKelle's boy Edison claimed a color to chase. 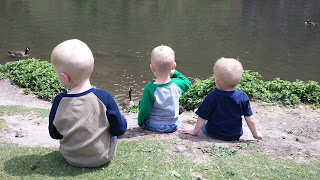 After lunch we headed over to the local ice cream store for cones, followed by the park where the boys chased ducks and canadian geese around until it was time to head home. We got a lot of talking in while the boys were playing and chasing, and it was fun! The whole ride home both boys were so worn out they just slept. They woke up as soon as we pulled into the driveway! Perfect for me. 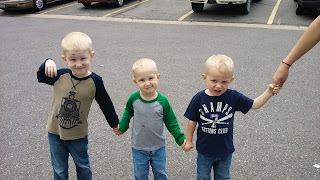 That night for FHE we went to the library for an owl exhibit. It was pretty cool, they had 3 experts come in and give lecture (but kid level) on owls. They even brought in a horned owl and a screech owl for us to see. Logan was enthralled! He kept waving at the owls and telling us things that pertained to the lecture and would raise his hand to share his ideas with the group. After we picked out a few books and movies and headed home. We don't often make it to the library's events, but when we do we love them!
Posted by Amy at 1:05 PM No comments:

So the highlight of the boy's past two weeks was the Primary Activity Night. They did a family movie (the Good Dinosaur) and movie snacks. The boys each ate 2 bags of popcorn and TONS of candy! After, while the adults were cleaning up, the kids played tag... in which Dustin decided to streak across the gym twice. What can I say, we've been having nudity problems since he got potty trained and learned to take off his pants. If I wasn't so embarrassed, it would be pretty funny.

After getting back from being out of town Dustin started having accidents so we upped the bribes. He earned an ice cream party last week for 5 days in a row of no accidents (he got to go to the store to pick a half gallon and sprinkles). This week if he has no accidents, on Friday we'll have a pizza party (probably make your own and we'll pick toppings at the store). We'll see after that if we continue to bribe or if he's back to normal. I long for the day when I don't have to worry about accidents. Or being woke up in the middle of the night (Dustin has sleeps all night for a while now, but I'm really dreading that in the next 3 months...).

Week two of work from home sewing has gone well. The lady who cut the material did it wrong, so it took longer than I would have liked to complete, but next week should go better. It's been a pretty easy way to earn extra money, even if it consumes my free time.

Mother's Day weekend went well. Friday night we asked Dave's parent's if we could stop by and visit and bring Dave's Mom's gift over and they offered to babysit! So Dave and I went out to dinner at Cafe Rio and saw the latest Captain America movie. It wasn't my favorite of the super hero movies, but Dave loved it. And it was really nice to have a break after how busy we have been lately.

Saturday we worked in the yard all morning and Dave worked on a project for me in the afternoon (he made me a necklace for Mother's Day) while the boys and I got work done around the house. I tried out a new gluten free muffin recipe for Mother's Day that turned out FABULOUS! It was supposed to be blueberry muffins, but I did cherry white chocolate chip).

Sunday the boys brought me breakfast in bed, and I got to open my presents. After church we had a casual dinner, naps, and I got to read while the boys played on the tramp with Dave. It was a good, casual day. I didn't clean up, so there was a big mess to clean up Monday morning.

I slept terrible Sunday night, so Monday I gave up on sleep at 6am. I got the kitchen and bathroom cleaned up and did two loads of laundry (I forgot to start them Friday...). Visited the Dr at 11 (everything looks good). They also did my second Thyroid test and my Glucose test. I'll get the results in the next two weeks, but am expecting everything to be fine.

In other baby related news, we've picked a first name! We're going with Brooklyn Plastow. We're still working on a middle name, but it's nice to have the first name figured out. Since we told the boys Dustin is convinced all babies are named "Bookin". Either that or he insists our baby is Batman. He's holding strong with that one. This second trimester has gone by so fast, I can't believe I'm already 27 out of 40 weeks done! It's pretty nice that by baby 3 there's not a whole lot I need to get done. Right before I will go on another mad cleaning and freezer cooking spree, but for now we're good!
Posted by Amy at 6:22 PM No comments: