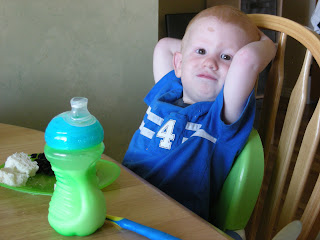 It's been a fun week for us! Last Friday Logan's cousin Sara came to play for a few hours and Logan just loved helping introducing her to all the toys and books. She would crawl over and chew on his blocks, and he would show her how she could build a tower. Not that she did, but she could have if she wanted to. She would babble and he would just drop what he was doing to help her.

Sara also joined us today for a few hours of play time too. Logan learned if he wanted to play with a toy Sara had, he just had to find something similar to trade with her (I want the big ball, give her the little ball). She was happy and he thought he was getting away with murder! But they had a fun time again.

We braved a walk to the grocery store to get a few things for dinner, and that went fine. I'm just glad we have the double stroller so they could both cosily walk with me. The two jabbered at each other the entire walk. Logan would point out dogs or trucks to Sara, and she would just respond.

Lunch time was hilarious! Both kids wanted to try out each other's food. And Logan got upset when Sara got messy (which happens a lot) he would yell "Sara mess!" until I wiped her off.

Logan's such a fun little guy! He has favorite games he will request. When Dave's home he requests "Chase" (he chases Dave around the house, Dave popping his head out and surprising him every once in a while). He also loves to pretend he's a dog. He crawls around panting and wants anyone that's there to do like wise. When Sarah was visiting with us, he had so much fun crawling around with her (convinced she was playing dog with him).

I've also been sewing like crazy lately. My sewing class assigned us 7 squares this month (we usually only get 2), so I've been working hard to finish them before next class. I finished the 5th of the easiest ones this morning, and am ready to start the next one tomorrow during nap time. Hopefully I'll be able to get the last two done with plenty of time to spare.
Posted by Amy at 1:25 PM No comments:

We've past some big milestones lately for Logan! He's learned most of his shapes (circle, square, oval, heart, star, triangle). I will catch him staring at something (like this morning the train tracks set up, then he'll exclaim "Oval (points to one side of the track). Oval (points to other side of the track). TWO oval!" He doesn't understand why a rectangle isn't a square, but I'm sure that will come with time.

Dave's also taught him to count to three, thus the two ovals. He refuses to rattle off the numbers for me, but he will count to three with Dave and he will tell me there are two chickens or three cows. He also knows which animals belong to which sounds as far as barn yard animals go. His cows still say "Boo" instead of "Moo", but we're ok with scary cows in this house.

He knows most of his colors (orange, blue, green, red, yellow, black, pink), but sometimes he gets confused with purple. He thinks it's blue too. And we're still working on white and brown. But we're getting there! He's such a bright little guy! I will ask him what color his shirt or pants are and most of the time he tells me the right color.

He has a vocabulary bigger that I can even start to count, and is surprising me with new words every day. He even will form small sentences. Today he informed me he had a chicken in his overalls. And surprisingly enough he had stuffed a toy chicken down the front for me to find.

Not to put a damper on Logan's awesomeness, we've started the Terrible Two's a little early. He have a major opinion now and will try throwing a fit if he doesn't get his way. This has lead to time outs, explanations on why things can't be his way, and good old fashioned ignoring the fit until Logan stops. Hopefully starting early means we'll be ending this early too! 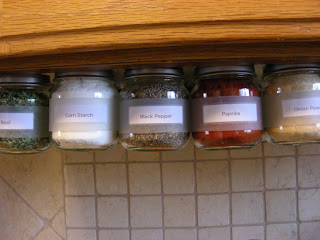 A few weeks ago I got fed up that my 45 spices were taking up an entire shelf in the pantry, so Dave and I started browsing Pinterest for a solution we both liked. I was thinking a small shelf on the side of one of the cabinets, but we ended up nailing a metal sheet to the bottom of two of the cabinets and placing my spices in jars with magnets attached to the top. So 45 spices are hanging out of the way, easy to access, but freeing up one of my shelves! I usually push the spices towards the back of the shelf, but I wanted you to be able to see them for the picture.

My free shelf has now become the bad for you snack shelf... We have one cabinet devoted to granola bars/crackers/etc. One shelf are Gluten Free snacks we all can can eat, one are not Gluten Free Dave and Logan can eat, and now we have an unhealthy snack shelf with candy, chips, etc. So I guess we better buy more junk food to fill it.
Posted by Amy at 10:21 AM No comments:

It was a rough weekend! We planned to spend the weekend at my parents enjoying Conference at my parents house, but Friday Logan got sick and put a cramp in our plans. So we went to Costco and spent $20 on strawberries, raspberries, chips, and other snacks. So we could hunker down at home.

Since we stayed home, Dave was able to get some yard work done. He dug up the rocks and trim in the back yard to throw away. We've been working on turning one of the way too over sized flower gardens into a few trees and grass. He also got the nectarine tree pruned.

After Priesthood on Saturday we went out for ice cream at DQ. They have a fan club that if you join you get coupons for buy one get one free blizzards 6 times a year. So we used a coupon for that.

I have been working like crazy on refinishing a swing we found for free last year, and I'm almost done. I expect to get it done in the next two days. It's going to be so nice to have it refinished and to get to use it!

Sunday I got sick too, which made Monday a nightmare! Logan wasn't feeling well in the morning, and very needy. The only thing I could get Logan to eat was a few fruit snacks, and I only had some chicken soup with rice. But by Monday afternoon Logan was feeling better and Tuesday morning I was feeling better too.
Posted by Amy at 12:42 PM No comments: 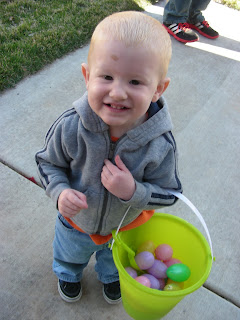 We had such a fun Easter this year! Logan had a blast with the plastic eggs all season, and this weekend was no different. 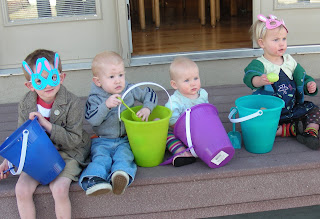 Saturday we headed down to a Easter Egg Hunt/Brunch at Grandma Sheila & Papa Mike's house. All the little people had a blast! I was afraid Logan wouldn't hold his own against the big kids, but his bucket was just as full as Gage and Andrea's. Even Sarah found a few eggs to chomp on. 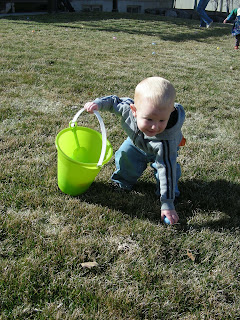 After we dumped the candy out of the eggs I threw the eggs back into the yard and Logan happily collected them again.

Saturday night Dave and I went on a hot Temple date night while Grandma Linda & Papa Bill played with Logan. When we came home Logan was walking Grandma down the street showing her his hood. It was so cute to watch them slowly meander down the sidewalk. 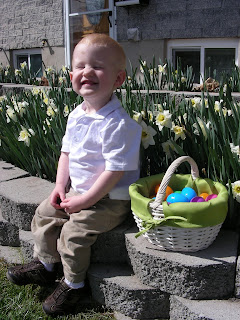 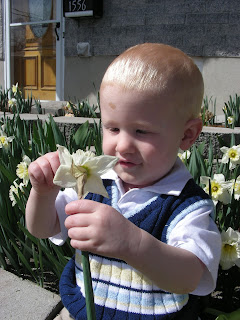 Sunday we went to church in the morning, but did some more serious egg hunting after nap time. Logan was excited to find more eggs and to get to enjoy the flowers outside. 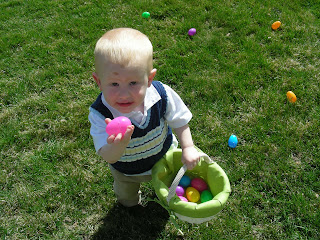 It was hot out, so the pictures show Logan in varying stages of undress... what can I say, we went through several outfits on Easter. 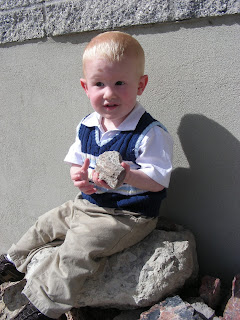 After a while Logan discovered our petrified rock pile (Dave's been meaning to put this stuff away). So we had to pose on the rocks. 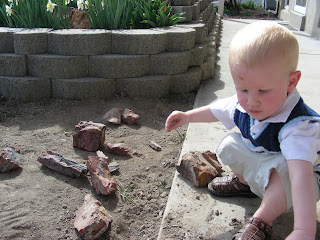 Then we had to re-arrange them all over the yard. Logan loves rocks. He collects them in his sand pails and pockets. And at this point I gave up on pictures because we were getting DIRTY! So we went inside, stuck the Easter ham in the oven, and swapped out the sweater vest for a sun hat. 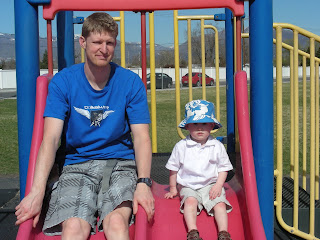 We headed over to the park for some serious sliding and swinging. We had so much fun! We probably played for an hour before we headed home to eat dinner. 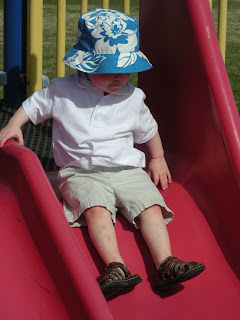 We had took it pretty casual on food this year (mainly because I totally forgot to prep everything the night before). So we ended up making our first ham ever (with a crushed pineapple and brown sugar glaze), Red Potato Salad, Deviled Eggs, Asparagus, and Chocolate Pudding with Whipped Cream for dessert. The ham turned out fabulous (and I don't usually like ham). We were supposed to have Chocolate Mint Pie for dessert, but by the time I remembered, it was too late to make it!

Monday, Logan and I ran all our errands. Now that we're a one car family, Logan and I get the car once a week. So we went to Walmart, the Library, Costco, the bank, etc. Getting a weeks worth of errands done in one day.

When Max is supposed to go down for first nap, we go on a walk and the change of scenery keeps him from being grumpy. Logan just loves him! They have so much fun playing together.
Posted by Amy at 1:14 PM 2 comments: