Logan had his first trip to the Dentist! I got a free coupon in the mail for a visit for kids under 2, so we took Logan in for his first visit. We have dental insurance starting next month, but none of our covered dentists are kids dentists, so I thought this would be a good introduction.

He did pretty good. He loved playing in the pirate ship that was the waiting room. He enjoyed going back and getting to sit on the big boy chair and play with his new tooth brush. He let the dental hygienist paint fluoride on his teeth. He even let the dentist check out his teeth. But he didn't want the spin brush put in his mouth to do the cleaning. So we skipped that part, but it was a good first introduction to the dentist.

Dave and I have also been shocked on how many words Logan's picked up lately. He knows all the food words he eats regularly, even some two syllable ones like water and cracker. He's also been surprising us with other words like pants, Jesus, and Grandma/pa.

The twin size mattress we bought Logan last weekend has been a big success! About a month ago Logan was waking up several time a night because he crawls in his sleep and had been getting caught in the bars of his crib. So we put his crib mattress on the ground and he slept a little better, but would crawl off the mattress and wake up crying. Now he's crawling around his big mattress, but not waking us up!

The only problem is he's realized he can get out of his bed! A few naps this week I've heard him playing by himself (I come in to fine toys and books strewn across the floor). One day I heard knocking on his bedroom door because he decided after 15 minutes he was "done" napping. But he's doing well over all with this bed. 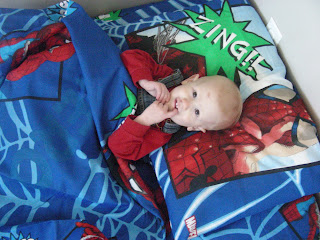 Logan got a big boy mattress this weekend! A month ago Logan was waking up several times through out the night because he crawls in his sleep and would get caught up in the bars of his crib. This weekend we finally bought him a big boy bed.

We took Logan with us to pick out the mattress and he had so much fun jumping on the 4 different ones we were trying to choose from. We then took him to Ross to pick out some sheets. We held up three sets to choose from (Spider Man, Cars, and just red sheets). He kept pointing at the Spider Man ones saying "MAN" again and again (much to Dave's pleasure). 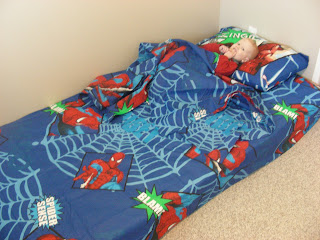 We got home, rearranged his room, and set up his mattress. He immediately jumped on the bed and kept yelling "BED" and "MAN"! He loves his new bed and his new sheets. When we have him lay down he points to Spider Man and says "MAN". Logan's been using Dave's old blanket (from his mission), because I haven't found a blanket that matches yet.

We have a bunk bed set we bought off a friend of mine before Logan was born. When we're sure Logan's not going to fall off the bed, we'll put him in that. I'm excited to get him in the bunk beds, because that's the kind of bed I remember having growing up!

It's been so cold here lately! Sunday we decided we needed some sun so we packed up our winter gear and spent a half hour sledding at the golf course down the street! It's kinda Logan and Dave's thing though. When I try to take Logan down, he pushes me away, tells me no, and reaches for Dave. It's nice that they can have a fun activity that's just theirs! 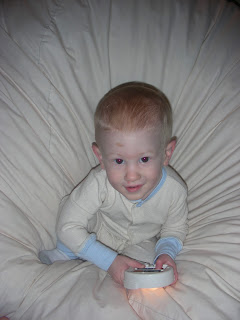 Monday we pulled the cover off the Luv Sac (time for it's yearly cleaning), and Logan had so much fun jumping on the massive bean bag again and again. His pj's also matched the inner lining, which made Logan just blend in the big squishy sack.
Posted by Amy at 1:29 PM No comments:

So I've decided this year our family resolution should to not get sick... Too bad we've already failed at that! Logan got sick the week before Christmas with a cold, and was sick for 3 weeks! At the beginning of this week he was finally better, then yesterday he had a fever again! Sigh... I'm so sick of a sick little guy! I feel so sorry for him, but I can't just cuddle and play with him all day, we've got to get some cleaning/cooking/house work done too!

Due to illness we've been stuck in the house a lot and I've been going a little stir crazy. We did go through all Logan's toys and donate 2 Walmart bags of toys to Savers. We also switched him from 12 month clothes to 18 months. So some organizing and cleaning was involved there. I also sewed a few more bags for Logan to store his toys in. So his closet (and the house in general) are looking a lot better.  His bags are all different colors and he knows which toys are in each and will point to:

And there's a Turquoise one in the office filled with blocks. I'll make him some more as he needs more.

January 2nd I started eating Gluten Free and have been trying out new recipes. One of my goals is to try one new GF recipe each week. I'm sure this won't last all year, but until I build up a nice cook book, I'd like to keep this up. So far I've found a FABULOUS Cheese Roll recipe, a good Pizza Crust recipe, a good Pie Crust recipe, and an ok Sandwich Bread recipe (I want to find a better one).

It's going well, but it's totally different baking than I'm used to. I need to comprehend the Chemestry behind it all better before I'm more confident in just whipping out a new recipe. Right now I have to get Dave to watch Logan so I can concentrate or do my baking after Logan's in bed. 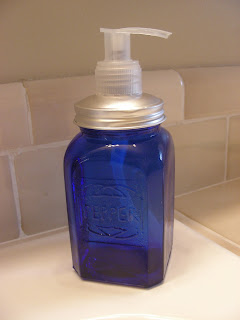 I did pick up this Pepper shaker while shopping for antiques with my Mom and Grandma over New Years and vowed to make it into a soap dispenser. I LOVE how it turned out! It's just so cute! I made it for the bath room, but now want to make another for the kitchen. I just have to find another cool jar to make it out of.

It took me 15 minutes to cut a hole in the top with a utility knife, cut the top off of an old soap dispenser, hot glue the top into the inside of the lid, screw in the top part of the dispenser (I wanted to be able to easily remove it if the top dispenser breaks), and cut the straw to the right size. Now every time I wash my hands I'm so proud of our little soap dispenser!
Posted by Amy at 1:20 PM 1 comment:

For New Years weekend we headed down to the Cabin with my parents. Logan and Dave still weren't feeling well, so it was a long drive. We stopped at a gas station on the way down, and Logan was appeased with two hot wheels cars and a bag of popcorn.

We went on one hike with my Grandma Yoder Saturday. It was a casual hike, which was nice since Logan and Dave weren't feeling well. When heading back Logan insisted on doing his own hiking and he had so much fun running up the trail, checking out the other people hiking, and the cats on leashes. It was bitter cold the whole weekend, but we still managed to have fun.

Sunday Dave and my Dad headed down to Arizona to get some killer agate petrified wood. Dave got three big pieces and a bucket full of smaller pieces. It was so cold down there too, so they came back home half frozen, but proud of their haul. The pieces will look great in our yard. My mom and I went to Church and to dinner with my Grandparents that Sunday. It was fun to visit with them.

Monday we spent a more casual day at the cabin hanging out, sewing, cutting hair, and watching movies. It was relaxing and just the calm day we all needed. Tuesday morning we packed up and headed home. When we got home we unpacked, watched a movie, and called it a night.

The rest of the week we have been unpacking and getting everything back together. I'm so glad it's the weekend again! We need a break again!
Posted by Amy at 7:05 PM No comments: