We're having a BOY! 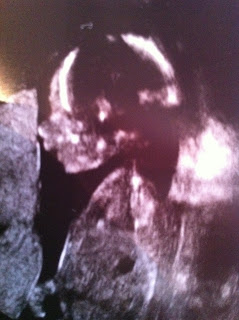 
Today we had our ultrasound and found out our baby is a boy! The Technician was very nice. Even though the office was running about a half hour behind she slowly showed us everything, answered all our questions, and messed around until we got a really good head shot of the baby.

Even though he was pretty stubborn about not wanting a profile pic! When she started pressing where his head was, he started squirming and flipped around so we could only see the back of the head (and his little butt sticking up in the air). But the Tech waited until he flipped back around, because I told her I really wanted a profile shot, so it would feel more real. She even stopped so we could watch the baby drink the amniotic fluids. It was weird but neat to see the baby doing something.

He moved around an awful lot (didn't like being poked and prodded). Friday night was the first time I felt the baby move, so it was good to confirm what I was feeling was actual movement. He was kicking and punching like crazy protesting the poking and prodding he was getting!

The doctor came in and said that everything looked great. He was an older man (I would say close to retirement), and was very kind/grandpa-ish. He wanted to double check that we were having a boy because "sometimes these Techs just don't know what they're looking at. They see the umbilical cord and think it must be a boy."

Our little guy wasn't too happy with this, and he flipped over to his stomach and crossed his legs in protest. But the Doctor was pretty persistent and eventually got an image that satisfied him to tell us yes, we were having a boy. He also checked the measurements and the baby is measuring about a week smaller than average, so we might have him a week later than originally anticipated (August 15th instead of the 8th). But we'll see when he actually makes his appearance.

Dave's also been able to feel our baby kick a few times. He's excited and nervous at the same time about having the baby. Although he would have been happy with a boy or a girl, he was really hoping for a boy to start out with. Now he's trying to convince me that we have to use a super hero name for our baby: Optimus Prime Plastow, Peter Parker Plastow, Bruce Wayne Plastow, or Wolverine Logan Plastow. I wouldn't mind Logan, but the rest are just not going to happen! We'll see what we can come up with; we have a few months before we have to decide.
Posted by Amy at 1:05 PM 4 comments:

My diet has radically changed since I've gotten pregnant (20 weeks on Monday). I no longer can eat curry or basil, but I find myself wanting sushi and salmon all the time! What is wrong with me? I've hated fish my whole life! On Monday we ordered out for work at lunch and I got the macadamia nut encrusted salmon. And I LOVED every bite of it! I find myself making salmon marinated in balsamic vinegar and honey way too often, and devouring it with wild rice and green beans. So easy; so tasty!

Wednesday I decided to make a Tilapia Chowder for dinner, and it was good. Not as good as salmon, but still good. This is such a foreign concept to me! Maybe I'll keep this preference for fish after the baby is born, because it's certainly a healthy meat to enjoy. Anyway, I've included the recipe for all you fish lovers out there. It was the perfect combination of flavors, with just a hint of fishy-ness. 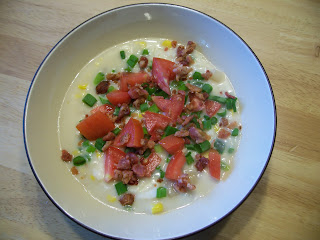 Ladle soup into 4 bowls. Sprinkle with tomato, green onion, and bacon.
We keep frozen diced green peppers, so this was probably one of the easiest home made meals I've ever made! Anyone can throw ingredients into a pot and stir it up. We will definitely be making this recipe again!
Posted by Amy at 8:09 PM 2 comments:

Ash Wednesday and the Start of Lent

I decided this year to participate in Lent. It all started with my explaining to a co-worker how I needed to find a place to get a good jelly doughnut for Tuesday. Growing up in Michigan, I was around a lot of Catholics, and one of the Polish Catholic's traditions for Fat Tuesday is to eat Paczki's (like a huge jelly doughnut, but bigger and far more unhealthy than any jelly doughnut you've consumed).

My dad's co-worker would drive down to Hamtramck early in the morning to pick up these doughnuts for the celebration. So we would wake up every Fat Tuesday to a fresh, authentic Paczki. We'd cut them into small pieces, and eat a portion of these pastries. So now, when I think if Fat Tuesday I must get my hands on a jelly doughnut!

After explaining this to a coworker, she asked more questions about Ash Wednesday and Lent. We discussed how the Catholics give up something in sacrifice for the 40 days prior to Easter, representing Christ's 40 days of fasting in the wilderness. I went into details about back in the day the Catholics would obtain from meats, fruits, and veggies and give the money they would have spent on these more expensive foods to the poor. Also bringing up how some congregations are still asked to give up meat during lent, and only eat fish on fridays.

This co-worker, myself, and a few other coworkers that were in on the conversation decided we would participate in lent together this year. I'll be giving up sweets during the week. I've had the craziest sweet tooth since I've become pregnant, and since we don't buy sweets, the main time they're a temptation is at work. We have a fully stocked snack bar with candy bars, swedish fish, cookies, fruit snacks & fruit rollups, ice cream in the fridge, and pretty much any sweet you can imagine. We even have doughnuts in the morning from time to time. And about once a week someone has a birthday and they bring in any treat the person wants. I probably only have one unhealthy snack a day, but it's not a great habit to get into.

So I'll focus on eating healthy snacks instead of the sweets. We also have a plethora of healthy snacks, which prior to pregnancy I loved. I just need to get back into the habit of fruits, baby carrots, cheese & crackers, hummus, yogurt, and applesauce. We even have a huge jar of peanut butter that goes great on crackers. So I'll be sacrificing sweets for Christ, my general health and the health of our baby! It's a win win
Posted by Amy at 7:14 AM 5 comments:

We're going to have a baby!

No period for at least 9 month, maybe even longer
Even though I progressively am gaining weight, people keep telling me how great I look
Dave helps out around the house more
I have an excuse to be too warm or cold
The house can be messier than usual and everyone is understanding


Breakfast foods for dinner
Crazy behavior or eating is easily written off
I get to miss a few hours of work for every Dr appointment
Fruit cravings (so tasty and healthy!)
Posted by Amy at 7:10 AM No comments: