The Best Oatmeal You've EVER Tasted!

I've never been a big oatmeal fan. Lately I've been trying to eat more of it because I know it's good for you, but it's never been something I would choose to eat. A few months ago work brought in some oatmeal from Jamba Juice. It was the best stuff I've ever tasted, and I've been thinking about the recipe since. I'm not willing to pay $3 for a little bowl of oatmeal, and I figured if I could find a recipe, I would give it a whirl.

This weekend I found Steel Cut oats at Sunflower Market (a kinda hippy-farmer's market local grocery store), so I bought a pound, picked up some soy milk and found a recipe I could tweak online. The results were just fabulous! Best oatmeal I've ever had. After tasting it Dave said he was expecting it to be really gross, but was surprised that he liked it better too. I'm going to try experimenting with it to see if I can use regular milk and just add vanilla to it, but at this point, here's the recipe as we tried it. 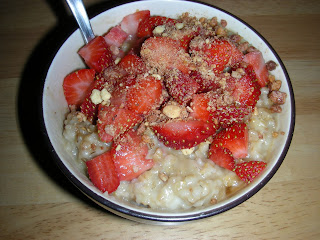 In a large sauce pot, melt the butter and add the oats. Toast the oats for 2 to 3 minutes. Add the boiling water and reduce heat to a summer. Simmer on low for 25 minutes, stirring 5 minutes before the time is up.

Pour the soy milk into the oatmeal, stir in, and cook for an additional 10 minutes, stirring occasionally. Spoon into a bowl and top with brown sugar, fruit and nuts. Makes 4 servings.

It took about an hour to cook all together, but it was well worth the time. Also, we refrigerated the leftovers (we didn't know it would make 4 servings), and it reheated fabulously! I added a little more soy milk to it when microwaving it, but it tasted just as good as the first day.

I just love how this oatmeal feels like it has more substance to it. It's thicker and more hearty. I added strawberries and nuts to mine, and it just gave it a little crunch and zest that I've never found in an oatmeal before! This recipe is definitely a keeper.

Today I'm 12 weeks pregnant (if you prefer, 3 months) and we're ready to officially announce it to everyone! Dave and I went to the doctor today and were able to hear the babies heartbeat. It was pretty cool to hear, and the doctor said perfect as far as regularity and speed. I still don't really look pregnant yet, so it's good to have some signs that everything is going well (blood work looked good from the last doctor's visit too).

I told my work, and they seemed to take it well. One of the owners is really hoping he can help us pick a name for the baby as soon as we know what gender it is since his wife has vetoed all his favorite names for their kids. They're pretty awful names to be honest, but I have to be nice. We were in the process of looking for another assistant for our Client Service team, and my boss has said we can dedicate some of their training time to learning my job so when I'm on maternity leave (s)he can take over for me. Between that, two weeks paid maternity leave, and up to 3 months unpaid leave, everything is shaping up nicely for work.

Things are starting to come together as far as the baby room goes too. As you may remember, we painted my office over Christmas break. We did it because we had found out the first week of December that I was pregnant, and I wanted to get the painting out of the way. Dave was out of school (important since I couldn't help with the painting), and then we could gradually put together the baby room over the next few months. So after much delays, here is the painted office/future baby room! 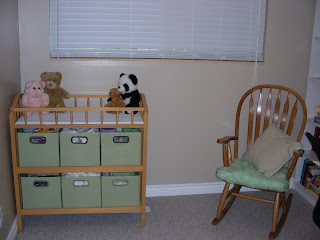 We just love how it turned out! To be honest, who wouldn't love this neutral light tan color better than the post-it yellow flat paint with peach/off white ceilings that was there before. Dave also insisted in replacing the trim and closet doors, and they turned out just fabulous! The closet doors make the closet seem bigger, since before we could only access half of the closet at a time. Over all it's a great start, and we're excited to continue to add to the baby room as we accumulate more stuff. I've also been working on removing all my stuff and donating it to DI or distributing it around the house. It's been quite the process, but it will be good to have done.

I've also been working on spit up cloths for the baby. I've been perfecting this pattern over the past few years each time one of my friends or family members has a baby. So I have a lot of remainder material from all the different spit up cloths I've made in the past to start with. Recently I realized I could crochet the edge to make it even more adorable (and in Dave's eyes girly). Here's a picture of all the ones I've completed so far: 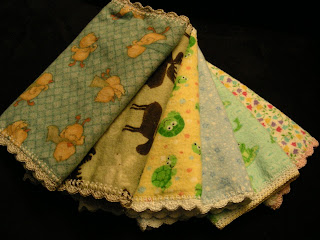 I mostly have gender neutral patterns, but I have a few strictly boy or girl as well. I've been working on them all, because I'll either eventually have both, or will give the ones I don't end up using away. Either way some baby in the future will be happy! I'm hoping to get about 20 done before the baby is born, and have a goal to complete one a week until then. We'll see though.

Saturday was just crazy! I got a lot done though. I baked a loaf of bread, tried a new recipe for pesto lasagna in the crock pot, tried a fabulous new granola recipe, and made some strawberry & blueberry yogurt.

The granola was exactly what I was looking for! I wanted something a little more chunky so we could eat it sprinkled over yogurt, but still had a good enough flavor to add some dried fruit to and eat with milk. The recipe I found is perfect for both! After it had cooled, it had set up in one big chunk, and easily crumbled into what ever size chunks desired. So I thought I'd share the recipe with you. 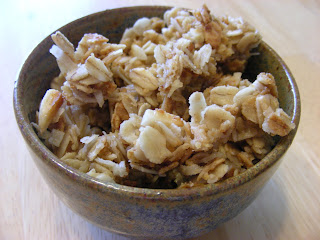 Preheat oven to 325 degrees. Melt together oil, honey, and vanilla over low heat. In a separate bowl mix together oats, flour, powdered milk, almonds, and coconut (and dried fruit if desired). Pour honey mixture over dry mixture and mix well. Spread out on parchment-lined cookie sheet and bake for 30 minutes. Stir occasionally until toasted. Let cool at room temperature, break apart to desired size, and store in an air tight container.

We also used our Christmas present yogurt maker for the second time to create strawberry & blueberry yogurt. The first time we made yogurt we just made plain. It worked out, but we discovered it got a little runny when we tried to stir fruit into it. This time we flavored all but one before we started, and it seems to have set up well, but all the fruit we added sunk to the bottom. We'll try it out tomorrow morning for breakfast and see how it turned out. It looks pretty tasty in the jars. 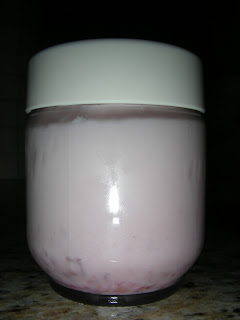 Where has the time gone?

I swear the last few weeks have just flown by! We've been working like crazy and have a lot to show for it. We finished my office a few weekends ago! The painting, new trim, new blinds and new closet door are all done and installed! The intercom has been removed and the hole in the wall has been patched! My furniture and all my stuff is back in the room!

I've been slowly putting everything away, and de-junking in the process. I figured if everything was already out, might as well get rid of the stuff I haven't used since we moved in a year and a half ago. It's taken a lot longer this way, but I'll be glad to have it all done. When everything's organized and finally put away I'll take a few pictures of it and post them, but it's still a little messy.

I've also been working like mad to finish crocheting a blanket for Dave's birthday. It's green, grey, and cream colored, and I'm hoping he'll love it. It should be done in the next few weeks if I keep up the work. It's pretty long at this point (long enough if the blanket was for me), so I've been using it to wrap up in as I crochet it. If I do say so it's particularly warm and soft.

We also spent some time putting up new bookshelves for the living room! Since we moved into our house I've wanted to fill the side wall in the living room with book shelves, and when I received my Christmas bonus check, I knew exactly what I wanted to buy. So they're mostly up (I bought Ikea out of the cabinet doors for the bottom and am just waiting for them to get two more in stock) and I have most of my books put away on the shelves. I still have a small pile of books I've never read in the living room, and Dave wants to add his school books to the mix. Then we'll be done.

I've signed up to take a 6 week beginners quilting class through church. It's Thursday nights, and I'm excited to get to learn a little more about the techniques. I've done some block squares in the past, but I want to get more into the different patterns and designs, and this sounds like a great class to get the basics. It's six weeks long, and all I have to buy is 4 - 5 yards of material. I want to take a more advanced quilting class with my mom this fall, and I'm hoping this will give me the basics I need to take that class.

That's about it for now! We've been busy, but I'm sure everything will calm down more now that Dave's back in school.
Posted by Amy at 8:13 AM No comments: