Trees, Canning and Teething (oh my!)

It's been such a busy week, and it's only Tuesday! Today was our fall neighborhood cleanup. This means the city drops of several dumpsters on our street and we can fill it with whatever we want. Dave has been wanting to remove several bushes from our backyard since we moved in. Although I'm not in love with the bushes, I liked the privacy they gave us.

Finally we came to an agreement that if we build up the back wall, we could remove the bushes. So this weekend we cut down all the bushes to the base, bundled them up, and piled them just waiting for today. In the spring we'll remove the flower bed trim, plant some sod, and maybe even add a fire pit to the area that was just a mess of bushes and weeds.

Well this morning it rained on our 8 bundles of bushes. And the trucks were late. So Logan and I loaded all the bundles into the dumpster and a few rocks Dave wanted removed as well. It was so cold and messy, but I'm so glad it's done. 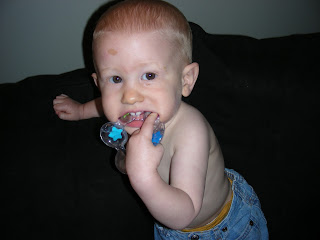 Monday was pretty crazy too. Logan's been teething again. I swear he gets the worse teething of anyone I know! Logan kept trying to put both fists in his mouth to gnaw on, along with everything else he could find. He was so ornery all day long! He refused to wear a shirt, screaming at me when I put it on, and ripping it off again and again. So I gave in and let him go topless for the afternoon. 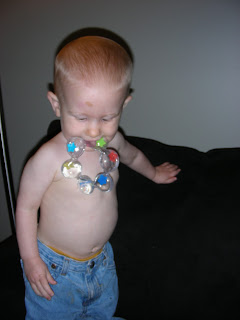 Also, since he refused to nap and was crying anyway, I decided to do the canning I had planned for the rest of the week. We did applesauce and spaghetti sauce. I'm just glad it's now over. Logan loves applesauce, and we've eat a lot of pasta, so both will be used.

He's been ornery again today, and I hope this tooth comes in quickly. The rest of the week will be wasted if not!
Posted by Amy at 1:39 PM 2 comments:

In Which We Work Too Hard

It's been a busy few weeks in the Plastow home! With interest rates down we have been looking into refinancing (why not save ourselves some money each month?). So we've been busy fixing things up so we could get an appraisal! 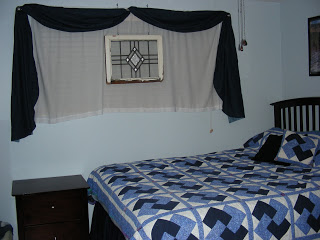 We painted the basement hallway and the basement bathroom's ceiling. We touched up all the paint in the house (from the bumps and scrapes that have happened over the past 3 years. We staged the house (ie. removed half of our furniture so the house looked more spacious). I made curtains for the bedroom and a bedskirt for our bed. I rearranged just about every room in our house... and deep cleaned everything. 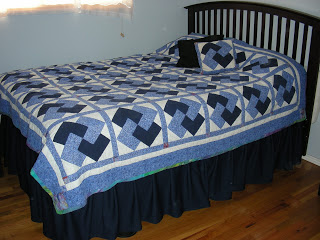 Now we've appraised at $10k higher than we needed and the house is spotless. The windows are washed inside and out. The oven is shiny clean. The bathtub grout has been scrubbed clean with a toothbrush. The baseboards are even dusted. All things that haven't been cleaned in about 6 months. The nice thing is now I don't have to worry about these things again for a while.

So we move forward on the refinance process and look forward to a lower monthly payment. It will allow us to put a little money each month away into savings. Maybe even put a little more into the mortgage itself. So less is more!

Other than that, Logan's been keeping us busy. He's been getting into everything lately! He realized he can reach on top of things now, so nothing is safe placed on top of anything his hight (the end tables, our bedside tables, etc). He also started throwing things in and taking things out of our trash. And he's getting pretty fast at walking/running. So we have to keep an eye on him all the time.

We've started (and almost finished) our Christmas shopping for the year! W've got all of Logan's stuff purchased. Dave's got my big gift last weekend (a new sewing machine!!! I saved up for half over the past year, and Christmas is covering the other half). And if Dave could just decide on what he wants for his big gift, I could get that out of the way. I always try to get the shopping done by the end of October, and I'm pretty close this year.

That will give me all the time in the world to finish this year's Christmas crafts. This year I know an advent calendar is on the list, and we'll see what else I come up with.
Posted by Amy at 12:41 PM 4 comments:

In which Logan discovers his pockets 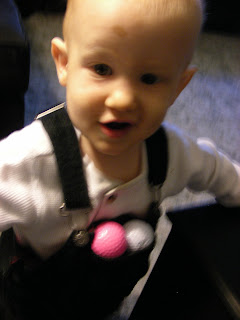 I've been finding rocks in Logan's pockets for weeks! He loves rocks and he always will bring some home from the park or wherever we are for later enjoyment. Usually we find them in his bed after nap time or on the changing table.

Lately he's been putting his pockets to the limits by stuffing as many golfballs in his pockets as he can fit. He loves them so much and just wants to make sure he has them when he needs them.

This weekend we went to a Conference party at my parents house. It was fun to be with the family and enjoy the word of the Lord. Dave and I got some good insight and inspiration. Hopefully we will let it change our lives for the better.

Something I found interesting was the changes that were made to the age you can go on a mission. It's really exciting that girls can now go on a mission at 19. I think more ladies will now have the opportunity to go.

I do wonder what this will do to the average age of marriage in the church though. It seemed to be younger than the general population before, and I'm thinking now this will up the average (since 18  months will likely be devoted to a mission instead of the pursuit of marriage).

I see this as a benefit in many ways. Missions are such a changing event in the lives of those that go. I would expect more women going better prepare for marriage and motherhood, with the extra spiritual knowledge they gain. I know the words of the prophet are inspired, but this doesn't just feel right to me, it makes so much logical sense!
Posted by Amy at 1:52 PM 1 comment: