I don't like to say I'm making New Years resolutions. Maybe it's because most people break them. But I do set goals for myself periodically. Unfortunately this January my goal setting coincided with the new year. So I've recommitted myself to exercise (I've been terrible since I started tending Abby and Maddy), set more clearly defined Scripture reading goals (personal as well as companionship), and goals to work on my rock business.

This weekend we worked more on completing my sewing corner! Dave refinished my newly acquired sewing machine table, he also used some scrap from the shed to build a shelf to go on top of my peg board, and I created a huge ironing board to go on top of the sewing table when it's closed! I LOVE how it all turned out! It makes me want to spend all day every day sewing… this might become a problem. Next project, I want to sew some baskets/crates to go on top of the shelf and help further organize things.

Yesterday Logan told me that when he becomes a man he will be as tall as Dave, be able to sit at his desk, and use the scanner whenever he wants. I told him that was true, but he won't be a man until he is 18. He disagreed. He thinks the age of manhood is 5. So we'll see in a few years what it's like for him to be a man.

Dustin's been learning like crazy lately! He's started saying "bye bye" when waving good bye. He usually does it after the door closes (when someone leaves), but we're getting there! He's also almost walking. He will stand up for a minute at a time and will take little shuffle steps between Dave and I. He also has been climbing everything like a mad man! He climbs couches and even the stairs. It scares me a little, but he hasn't fallen yet. 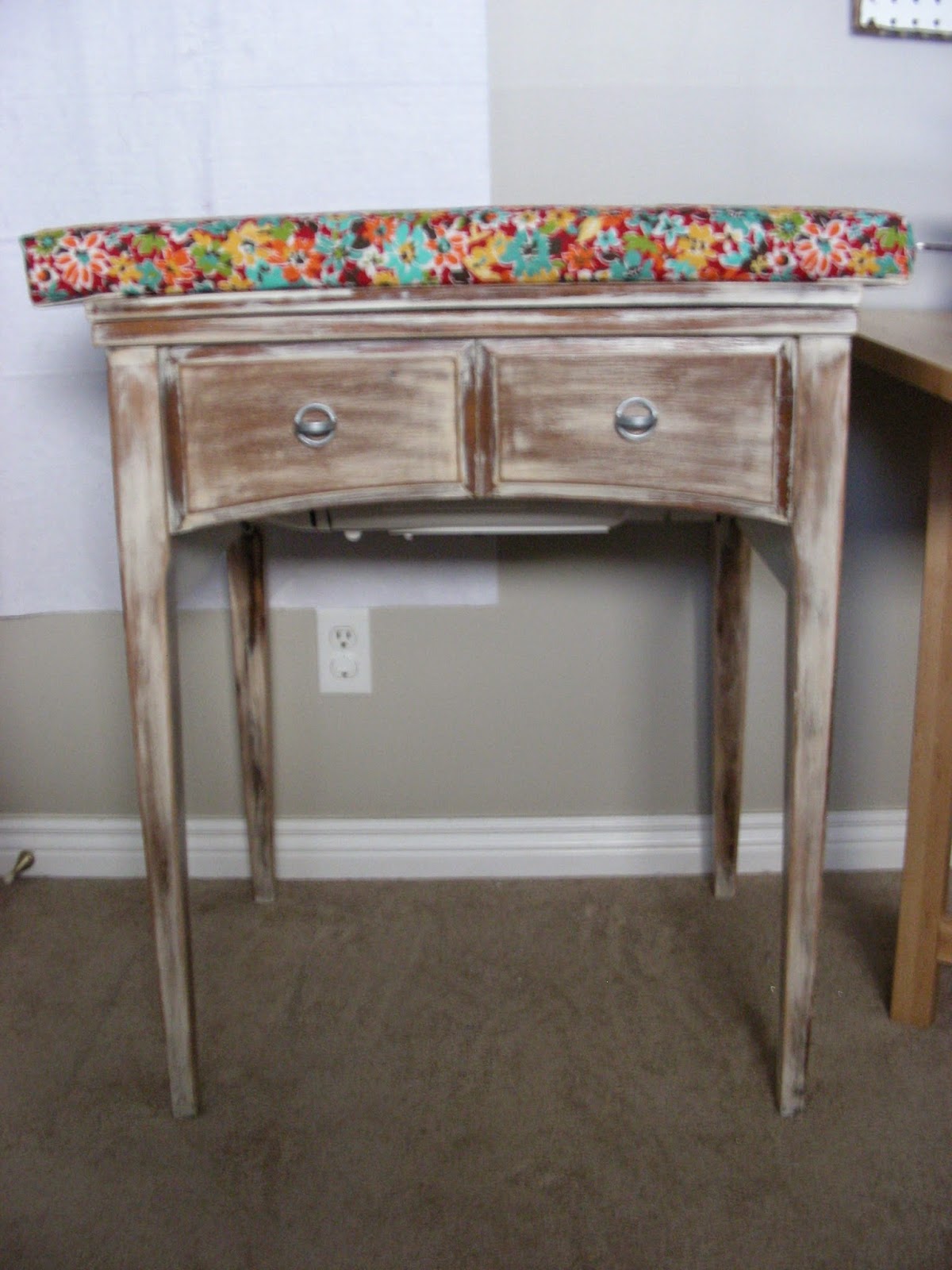 Dave finished my sewing table this weekend! I've been dyeing to try it out it since I found it, and I love how it turned out. I made an ironing board to go on top when the sewing machine isn't in use. It's huge and just perfect for ironing! I've only used it twice so far, but love the idea. 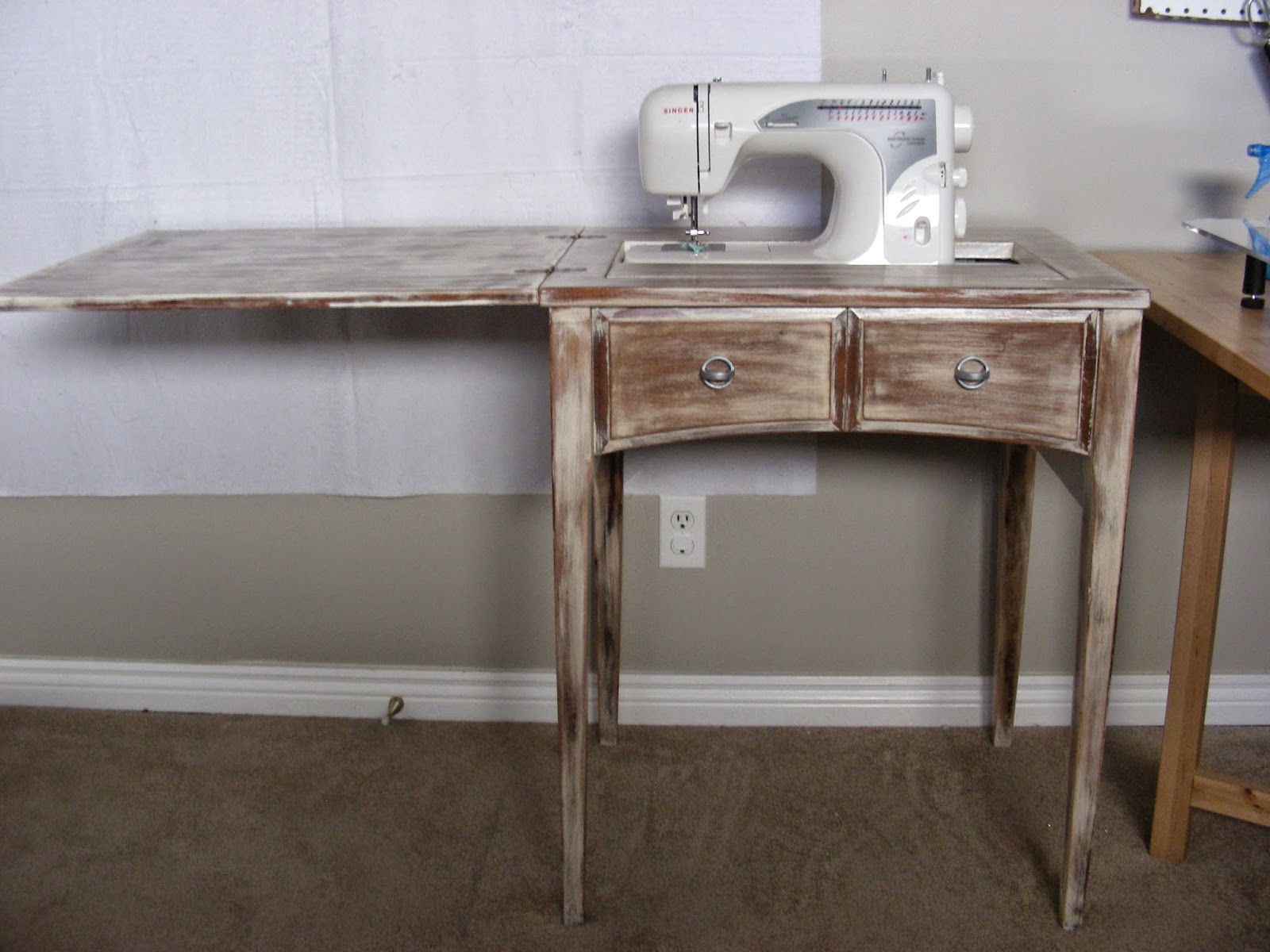 This is how it looks like open, with my old Singer in it. The table lines up perfectly with my old machine. Sometimes you just need two machines, and when that's the case, I'm now ready.
Posted by Amy at 3:59 PM No comments:

I can't believe it's January 8th already! December was so busy with stuff. Dave took off work from Christmas eve through January 2nd. He had a few of those days off anyway, but he needed a long break! And we were glad to have him.

We got a good amount of snow Christmas eve so Logan and Dave spent a lot of time outside. It was down to 5 degrees out, so way too cold for my taste. But Logan LOVED it. Every morning he looks out the windows to see if there is snow! 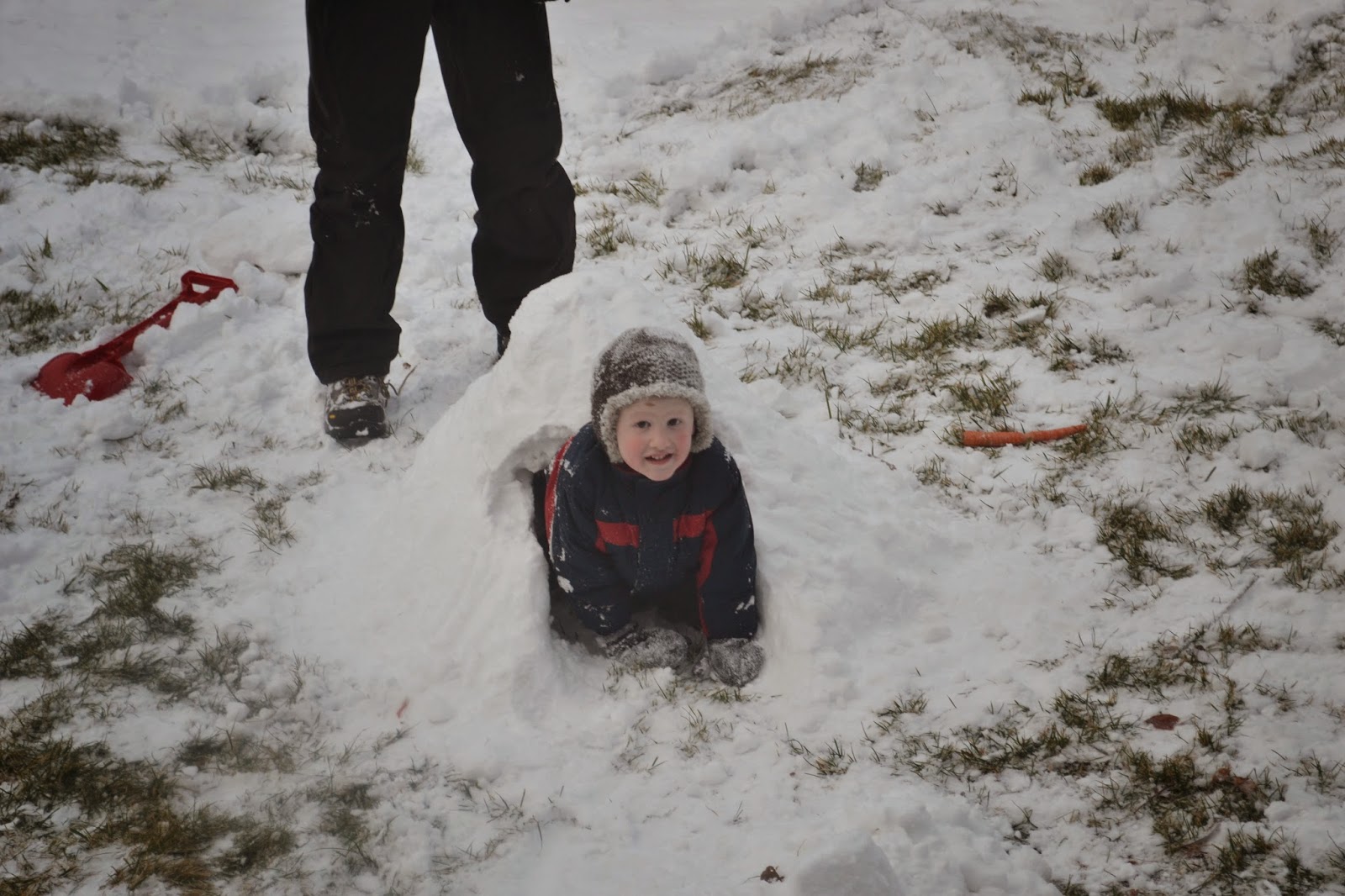 Since it wasn't really packing snow this time, Dave convinced Logan to make a tiny igloo (i.e. mound of snow with a hole in it). 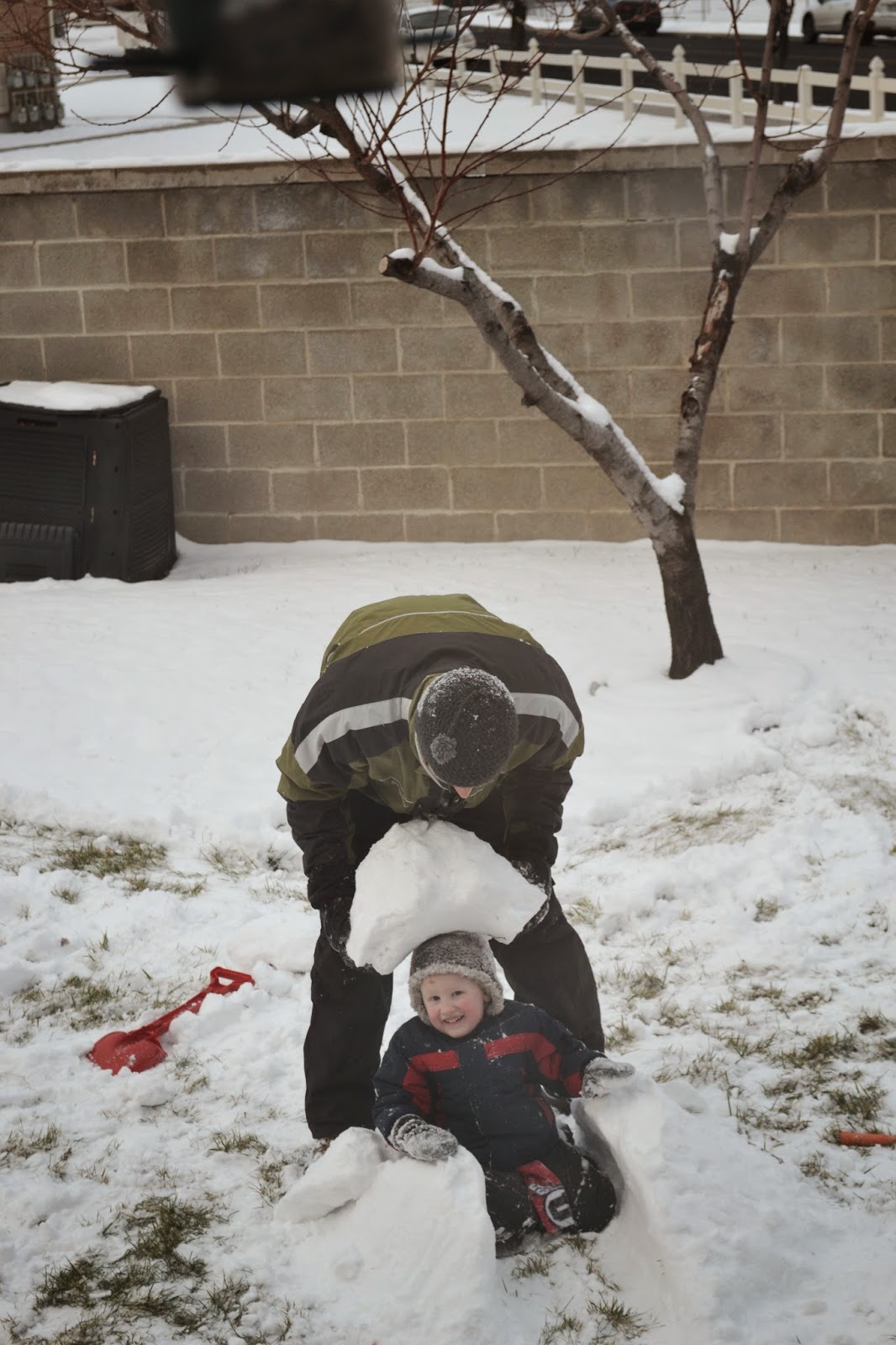 It was small and not packed well, so it quickly broke. Then it became a weapon. 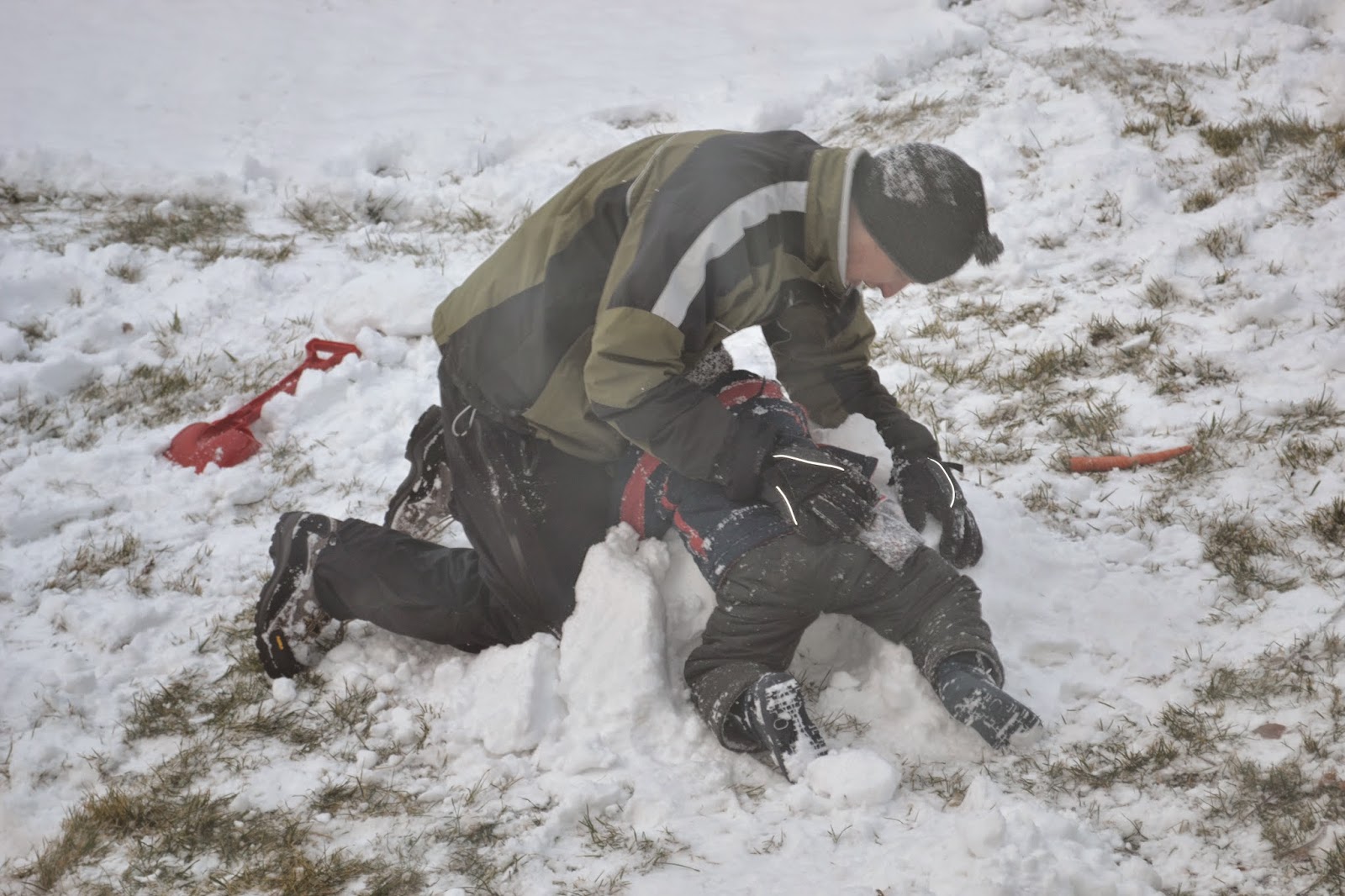 Which lead to a wrestling match in the snow. Which sounds awful to me in such cold weather... Which of course lead to a snow ball fight. Logan held his own. 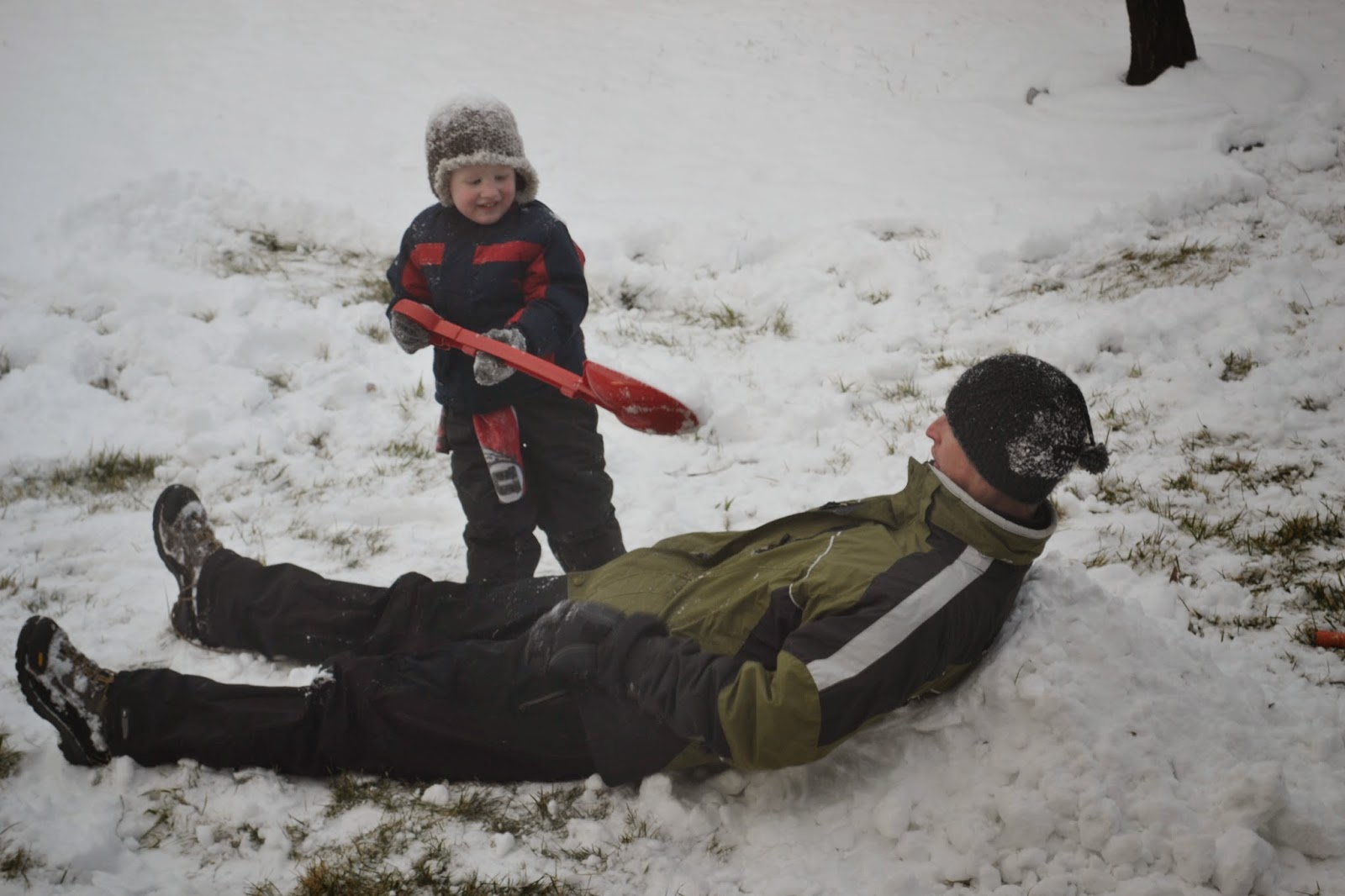 Which couldn't be complete without shoveling snow on Dave and trying to burry him. 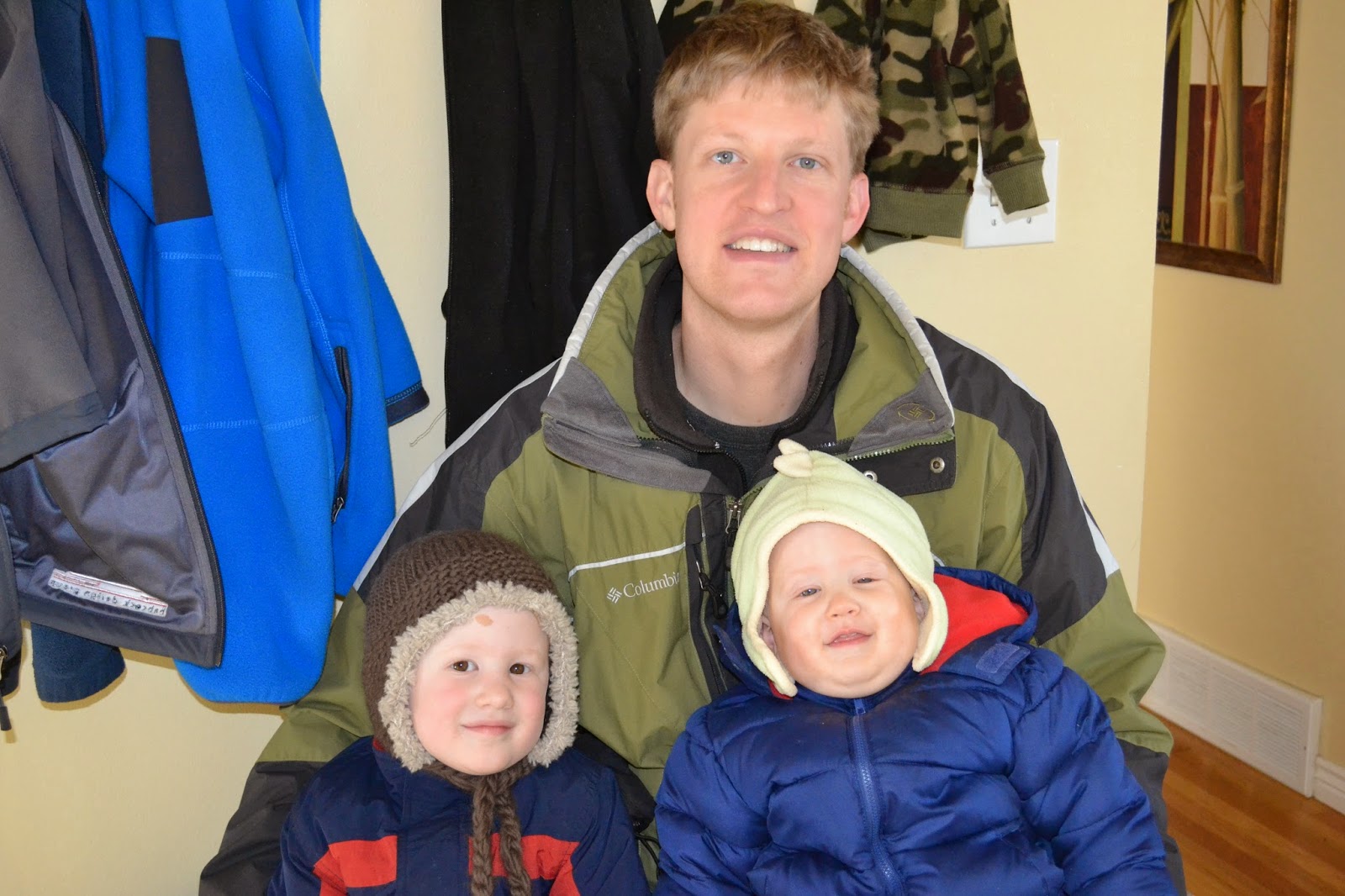 We also took the boys sledding! We had to break down and buy a second sled this year (the first one came with the house). 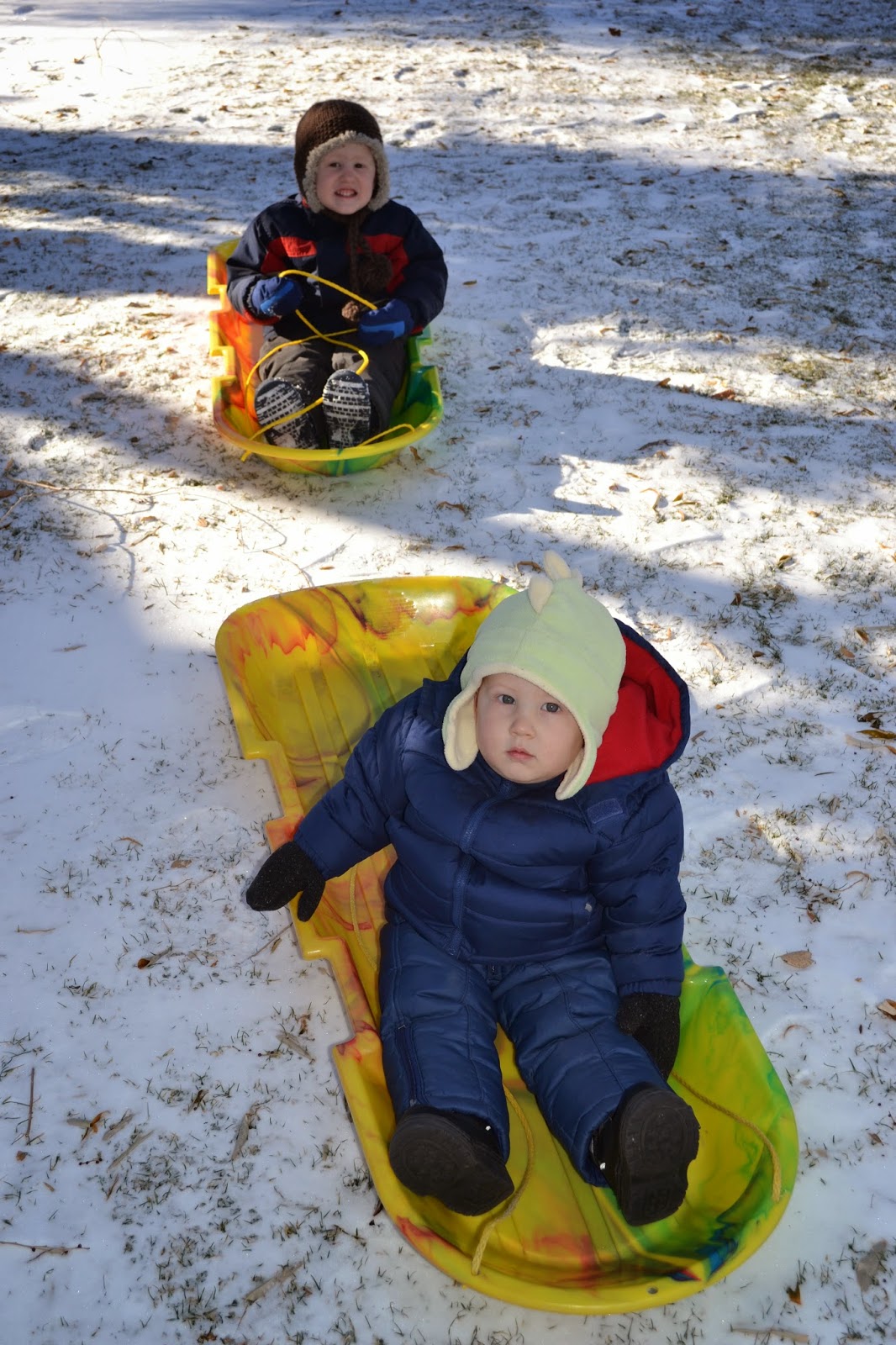 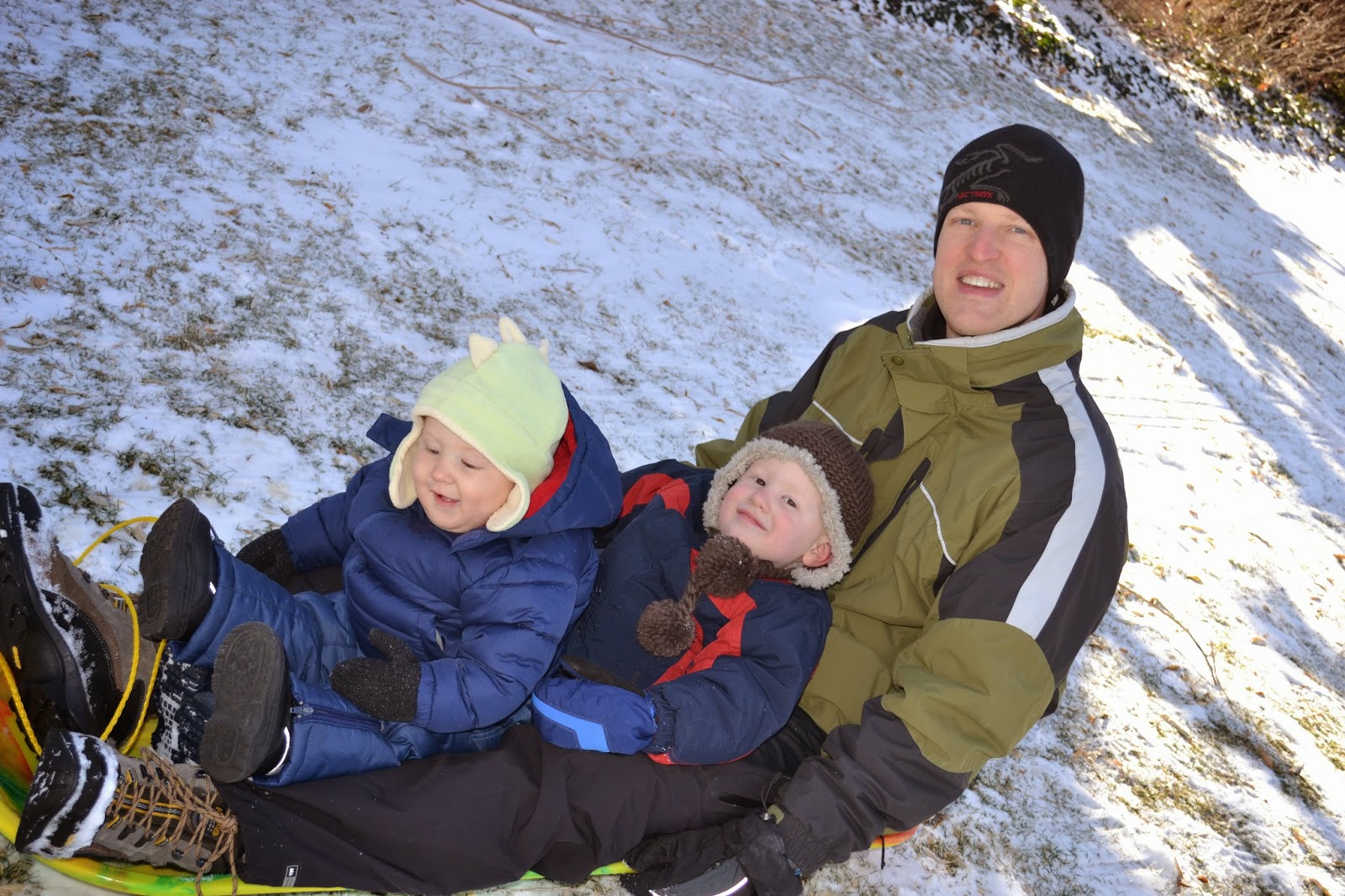 Logan was so proud of himself for sledding on his own! He even went down the steep hill by himself. He laughed when he crashed, and got back up and tried again. Dustin wasn't so sure about it, but what can you do! 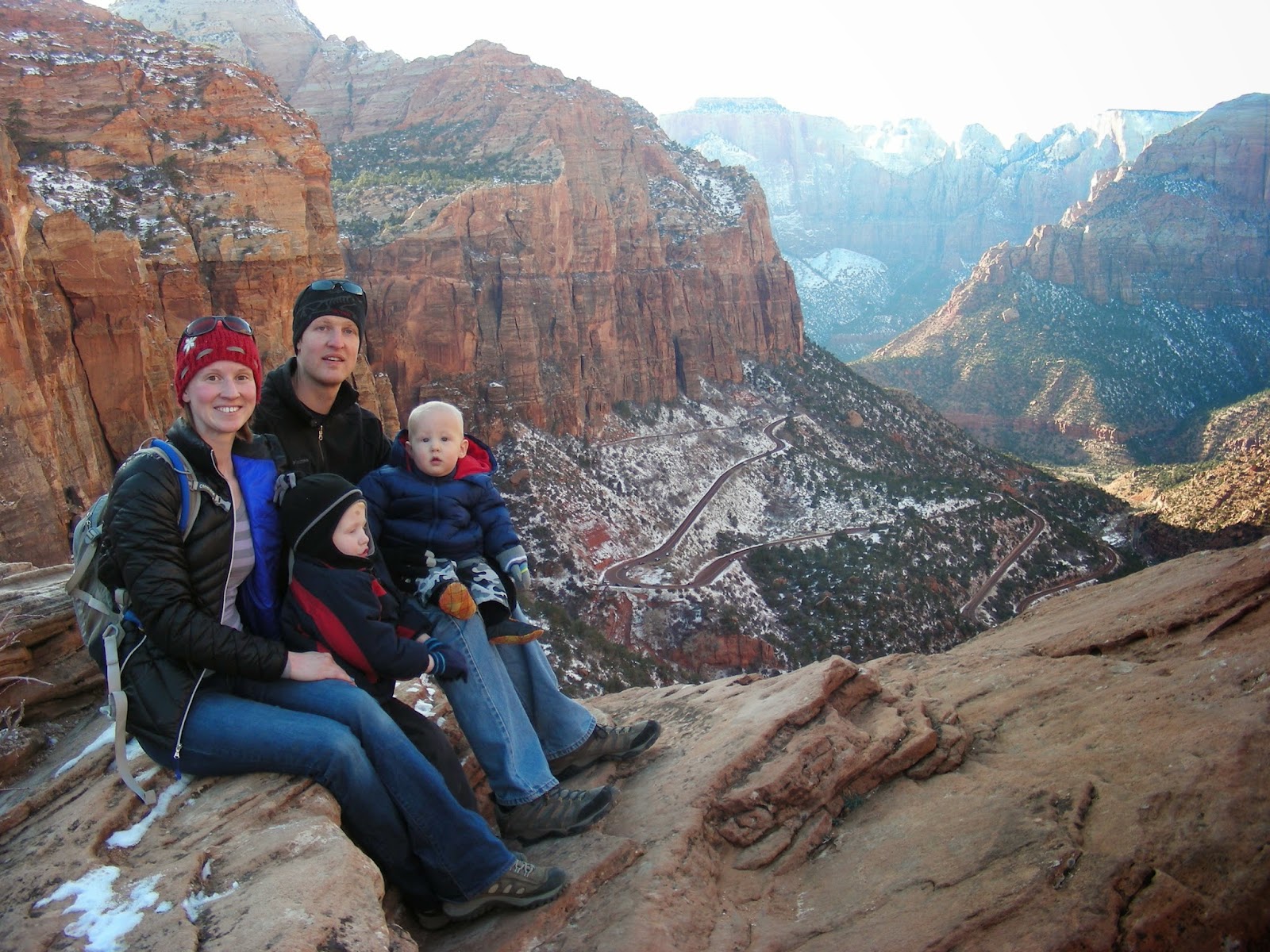 We also spent a few days down at the Cabin and got to do a little hiking. Yup, this is the only picture that turned out! But we had tons of fun! My parents sold the cabin to someone that viewed the house the day after we left (they haven't closed yet, but should in February). We have loved the Cabin and will miss it like crazy!

While we were out there we got to visit with my Grandparents Yoder. It was nice to catch up with them! 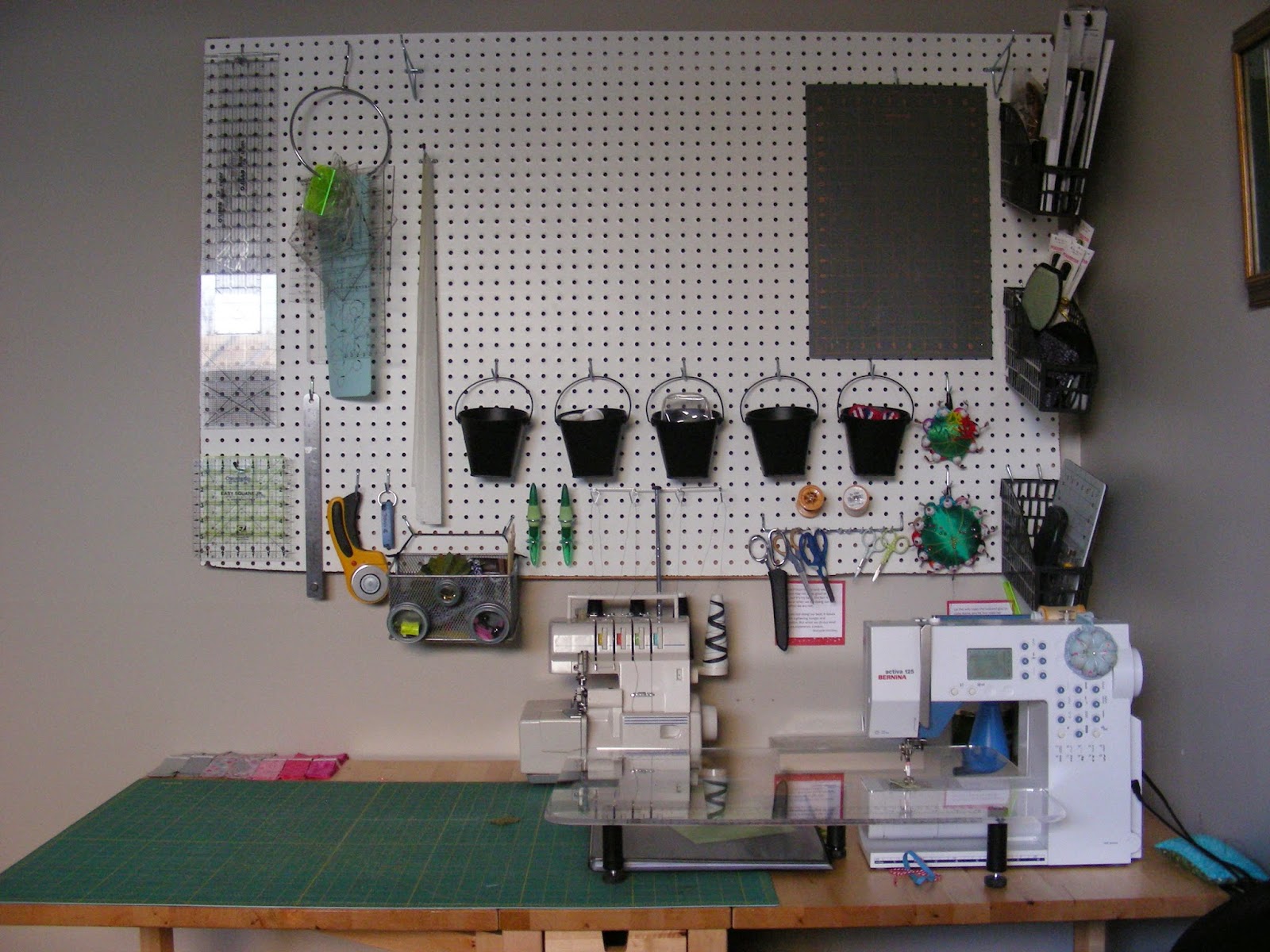 Dave was busy over the break making me a board for all my sewing stuff! He's planning to make a shelf to go across the top where I can put things like the buttons and ribbon I don't want Logan to get into. I love it! And I love that everything is now easily accessible and off my desk. The buckets and magazine holders were from the dollar bin at Target (and the buckets are chalkboard paint, so I can write on them). Now I just need an ironing table. 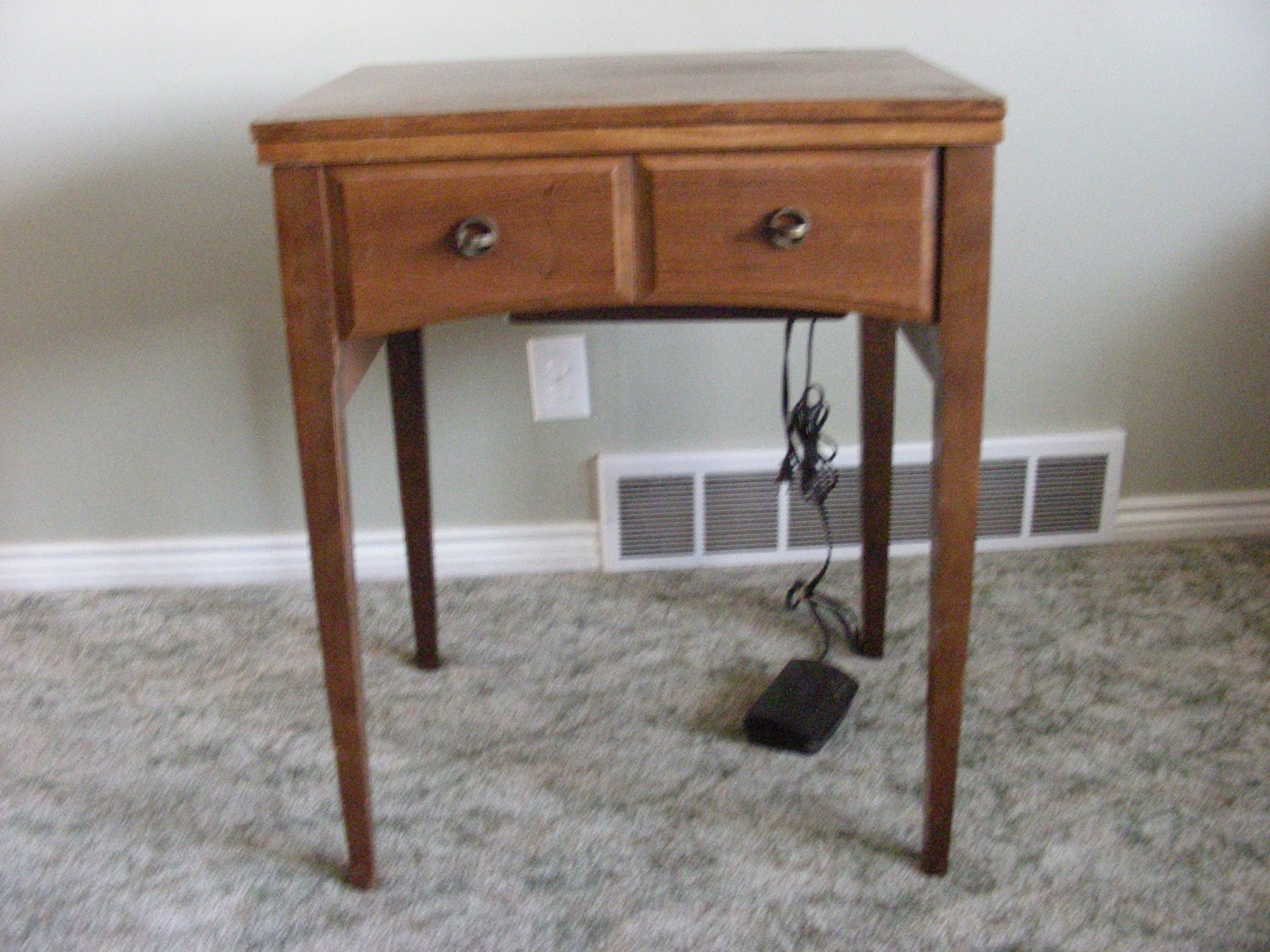 So I found this on the side of the road for free. It's one of those fold out sewing machine tables! I can't wait to convince Dave to refinish it for me. 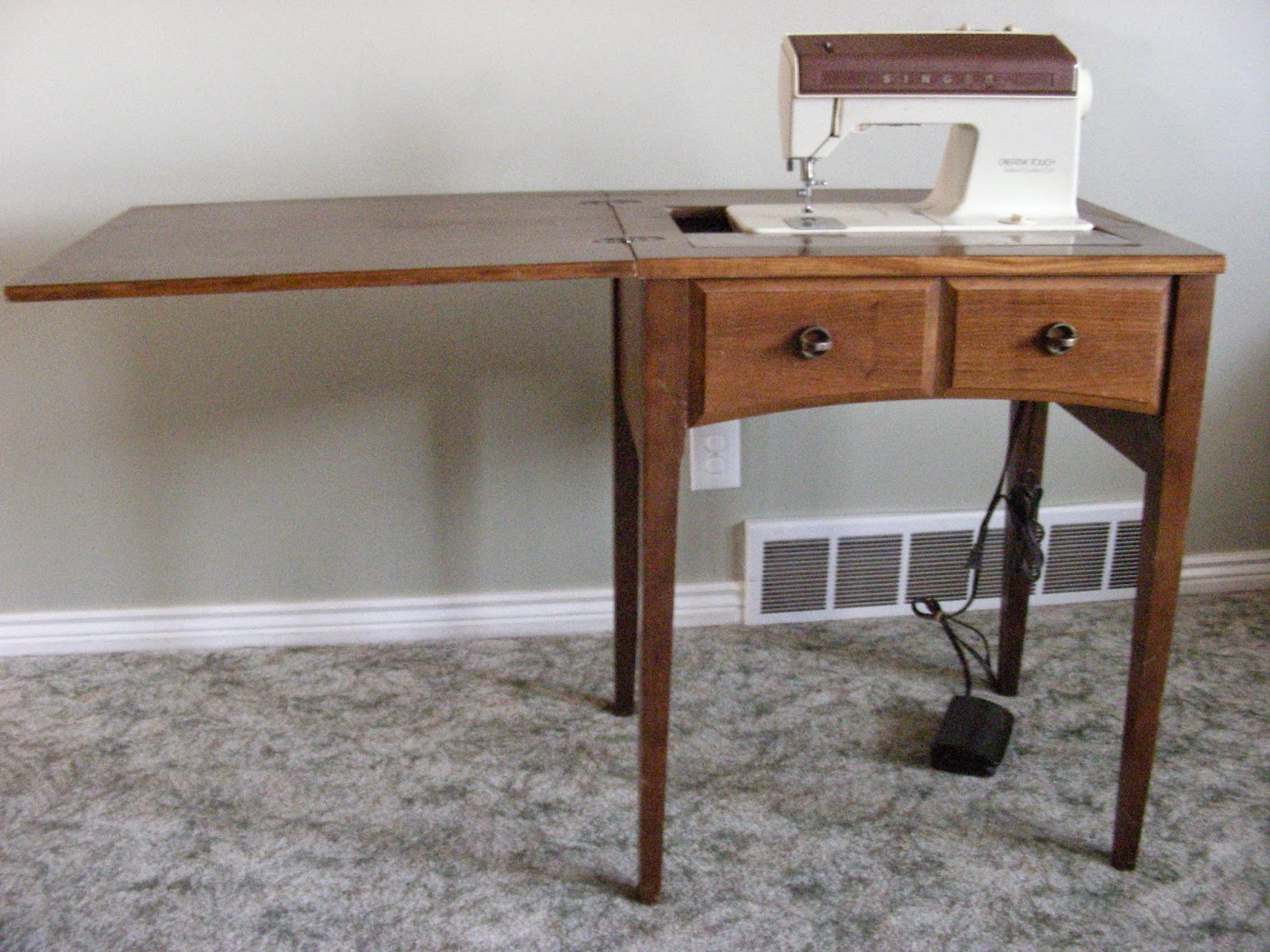 It came with a sewing machine (I haven't tried it to see if it works or not). I haven't quite decided what I want to do with it. I envision creating an ironing board cover that slips over the top and can be removed when it's open. And I haven't decided if I want to remove the sewing machine and replace the fake drawers with real ones. Then I could use the big fold out part for a cutting board. Or I could see if one of my machines would fit/work with the table, because it's a really cool concept… So many decisions! I think I'll have Dave whitewash it though. I like having the wood grain showing through.

But I'm basically in love with the table. It's such a cool find!