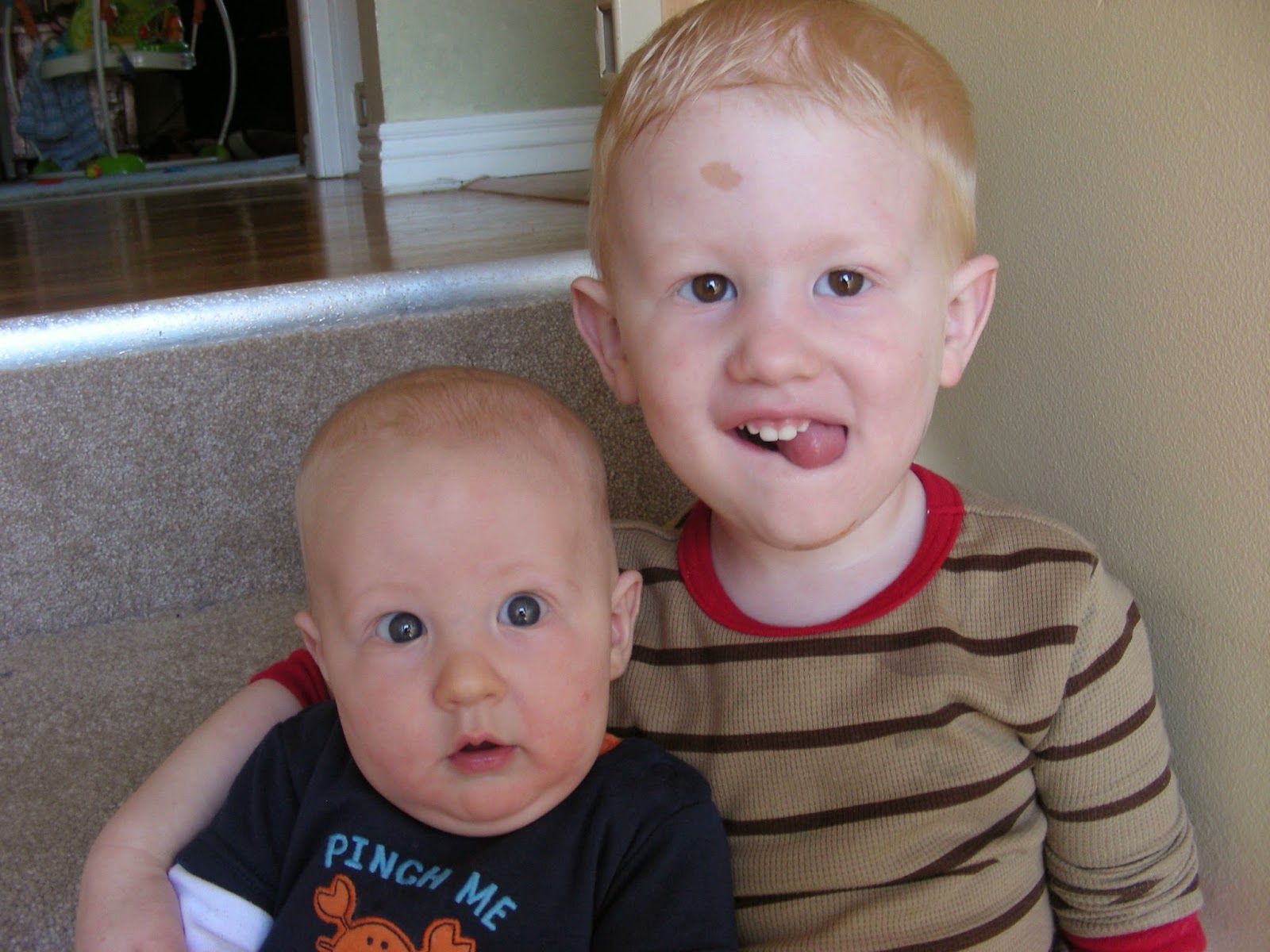 Logan's been sick again! It's been a rough month for him. This sickness is a chest cough with runny nose and sneezing. The first two days he was so pitiful! He just wanted to snuggle and drink juice all day. We watched two movies a piece those two days. Dave felt so bad for Logan, he went out and rented Frozen from Redbox for him. Logan also started napping again. 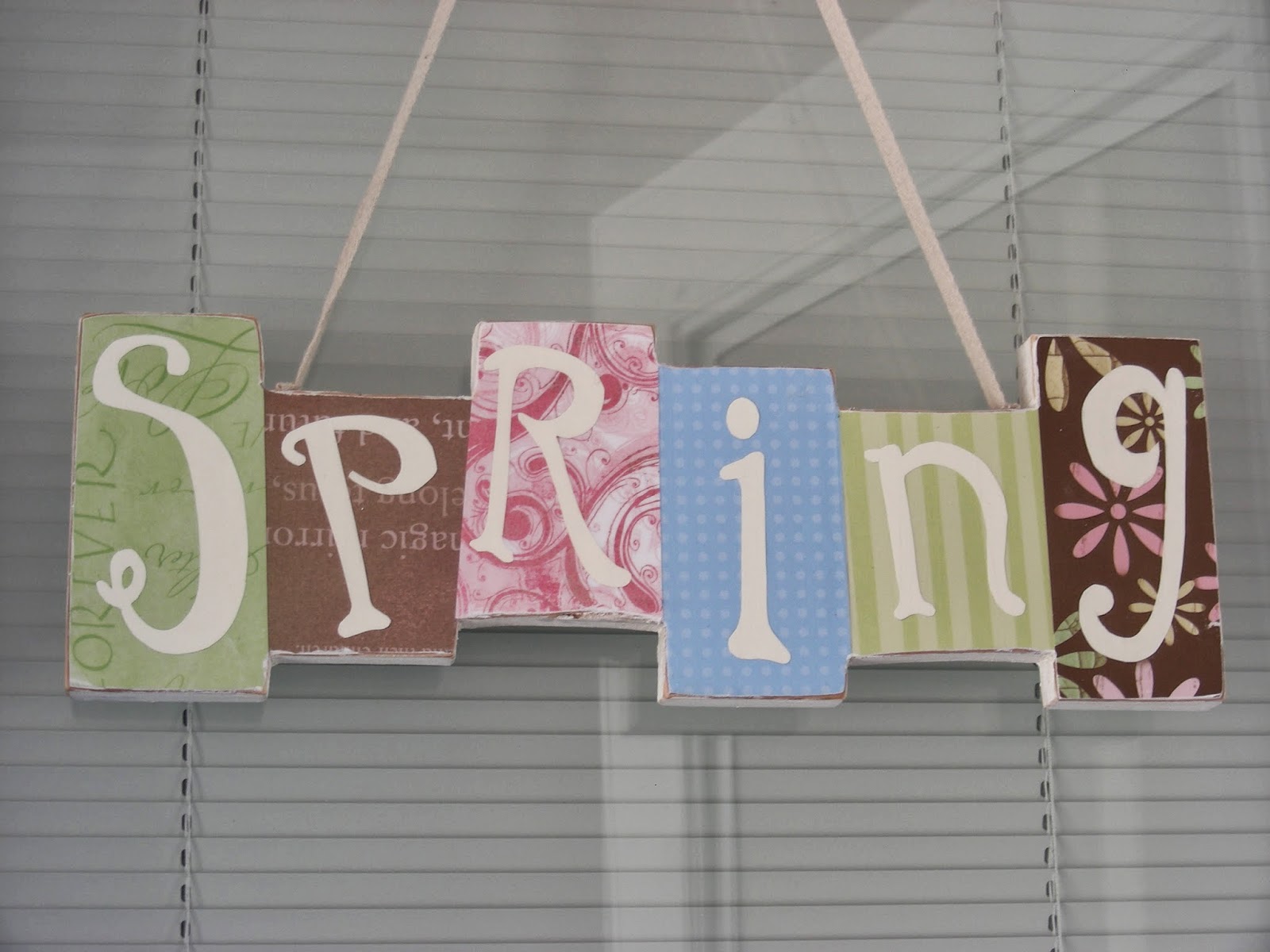 Saturday Dave watched the boys so I could work on a craft with his sisters and sister-in-laws. I made a spring sign for the door. it turned out pretty cute. I've been wanting more decorations around the house, but haven't gotten around to it yet. I'm in the middle of making an Easter table runner too. Hopefully I'll get it done before Easter. 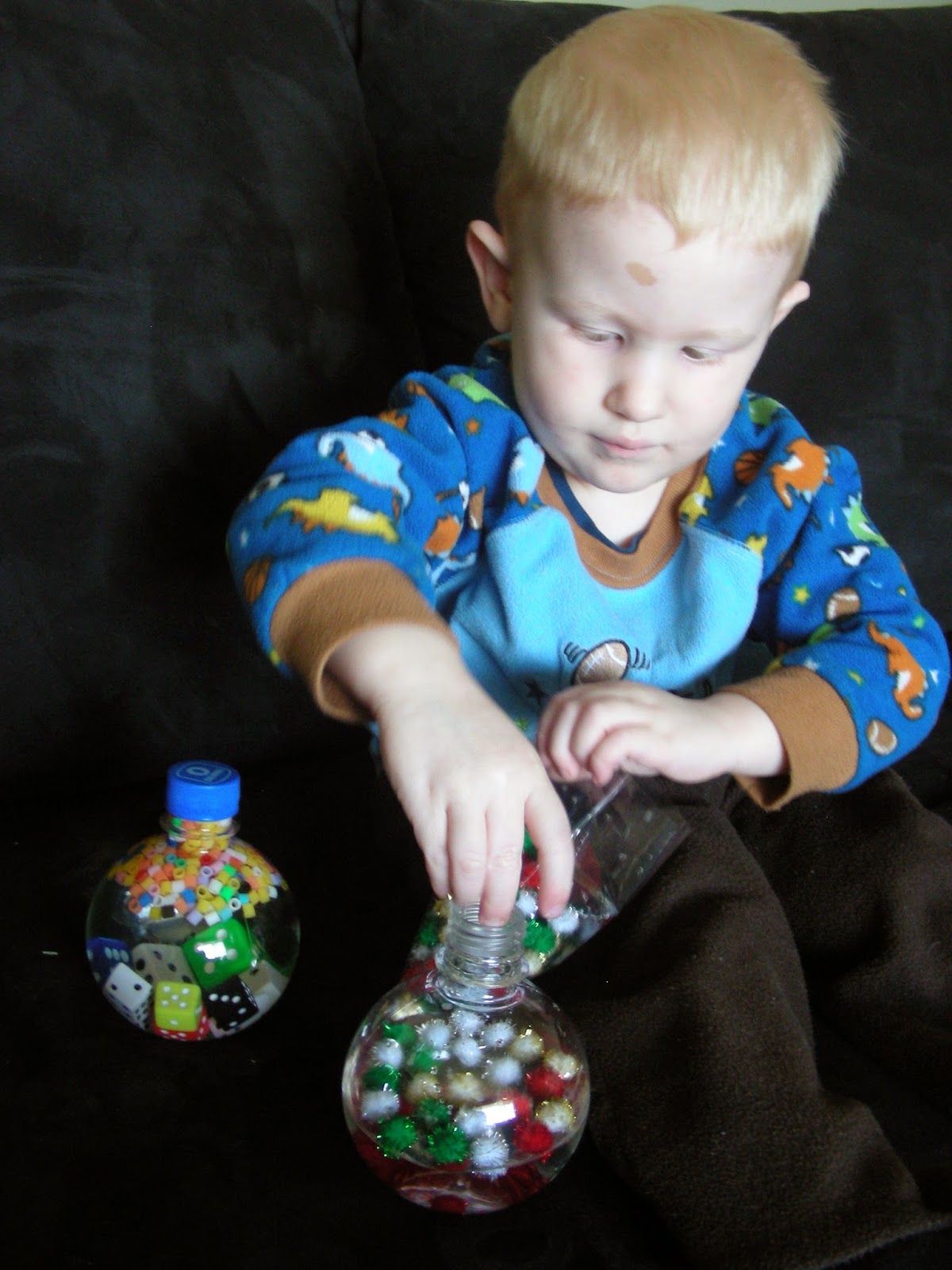 Yesterday and today he is doing a little better. We've been playing again. We put together some I-spy bottles (he got to put the dice, beads, and pom-poms in, then we filled them with water and hot glue guned the cap on). He had tons of fun adding the stuff to the bottles, and trying to figure out why certain items would float and other ones sink. We also made new play dough and played for hours. 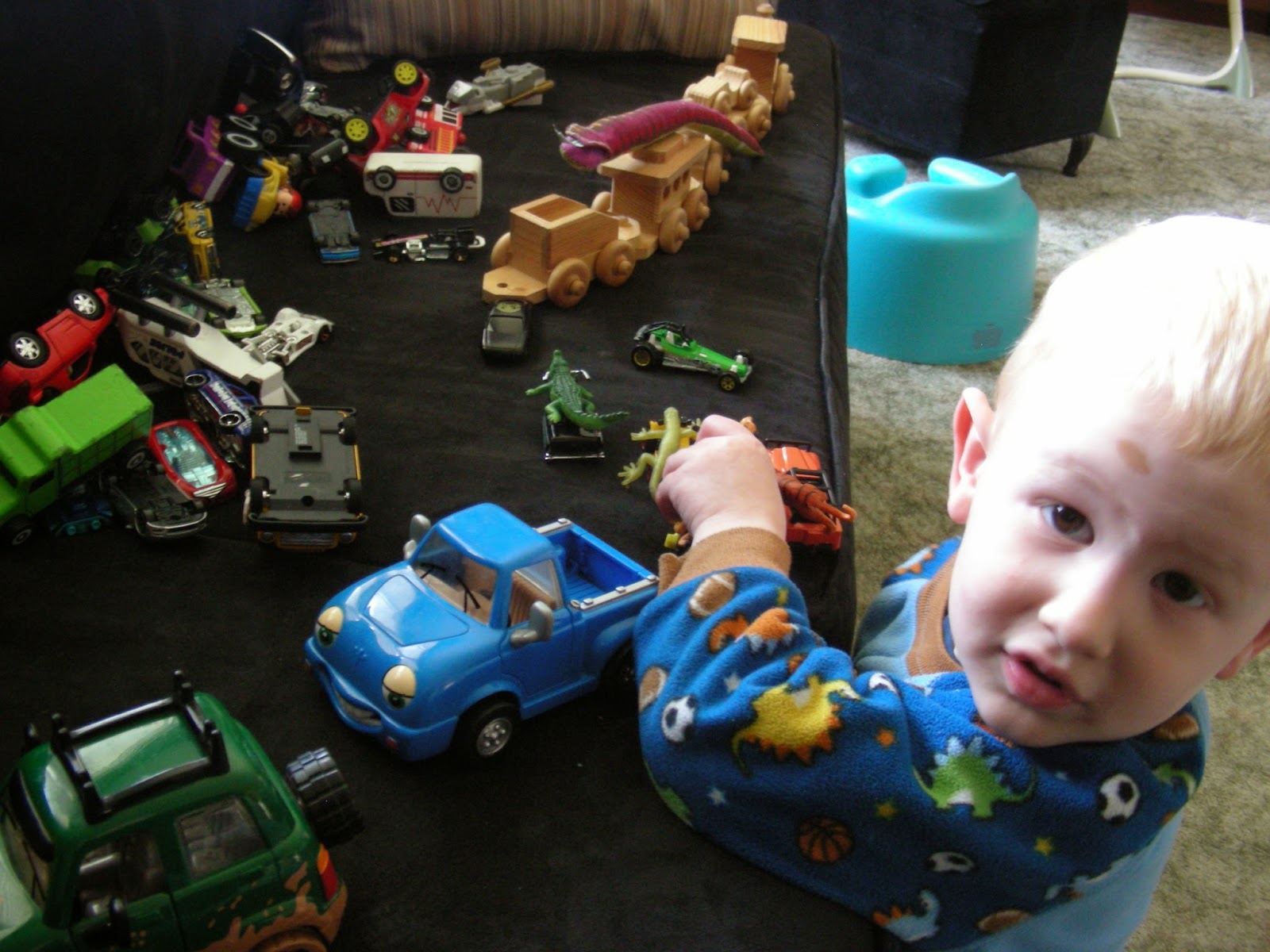 He's been in jammies for 4 days now (good thing we have several pairs). And we've been playing with cars and animals a lot. Logan loves putting an animal on top of a car and have them drive around.

Sunday Dave taught Priesthood, so he headed to church while I held down the fort with the boys. I read them an article from the friend about the atonement. It was very simple. This morning Logan was coughing pretty bad. When it was over, he said "Mommy, Jesus will pray to God in the Garden that I will feel better." Some times I'm shocked by how much he gets. It makes me feel like I need to be teaching him all the time. 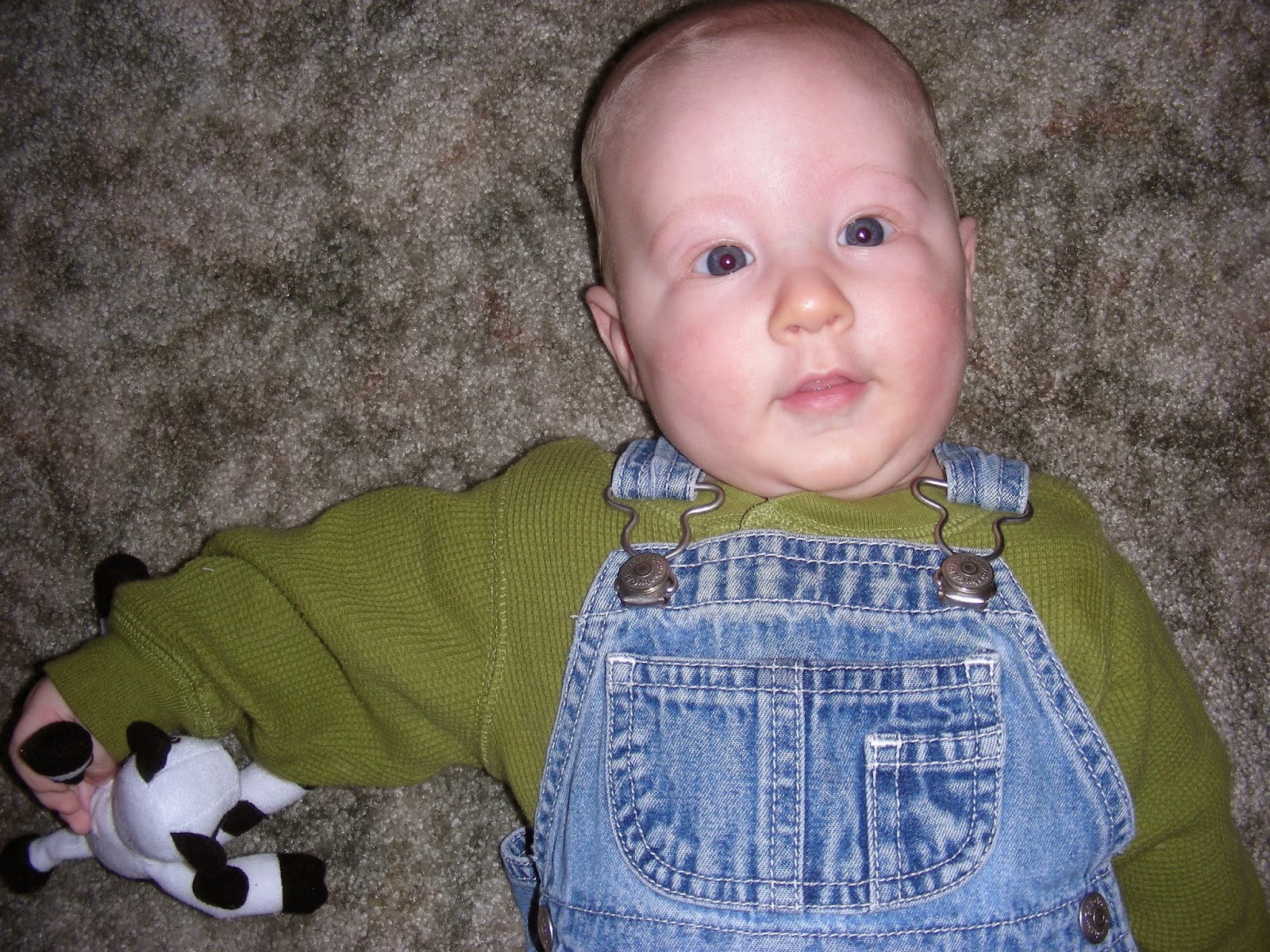 Dustin has been happy as ever. He got a little cough for two days, but I think he's better. I'm glad he didn't get as sick as Logan. He's been grabbing toys and playing with them a lot lately. He also has loved jumping in his Jump-a-roo! He also tries to grab the books from me when I read to him, so I've started giving him one book to look at while I read him the other.
Posted by Amy at 1:21 PM 1 comment:

Last week was a fun week! It's been beautiful lately (high 50's to mid 60's) so we've been going on walks and playing outside a lot. Logan loves being outside! We play cars and dig in his sandbox, and play on the swing.

While Dustin was taking a nap Friday, Dave took Logan to the library. They read books, visited the libraries chinchillas, and picked 5 books to bring home. They were gone for an hour! Logan had so much fun.

Saturday morning we went to Lowes and bought some seeds for the garden and two bird feeders for the yard. We set one up outside the living room window, so we can see the birds eating. Day one Dave was worried the birds wouldn't find it, but by Sunday we had 3 birds come several times to eat. Logan gets so excited when he sees one, he rushes over and scares them away. But they'll get used to him.

That afternoon we also went on a bike ride. I was worried about Dustin getting fussy, so we biked for a half hour, stopped at a park, and headed home. Dustin fell asleep about 20 minutes before we got home. It was so cute! His head was rested on Logan's shoulder in the trailer. Logan was less than happy about that. He kept telling Dustin to "Move! Don't sleep on me!" I wedged a blanket in between them to keep Dustin off Logan, but it didn't really help.

Saturday night Dave's parents stopped by with a surprise for the boys. They made a tepee for them. Logan LOVES it! He's played cars, stuffed animals and hides in it. He insists on bringing me and Dustin into the tent with him regularly. When I finally moved it into his bedroom, he freaked out! "Where is my tent! We need to hide in it!"

Sunday was Stake Conference. I woke up late to Dave and Logan making banana chocolate chip waffles. Then we had to rush to make it to Conference on time! The boys did well for the first hour, but  then Dustin needed a nap (and he doesn't sleep well away from his bed). So I took him to walk the hallways and lull him to sleep and Logan decided to join me. We found a few kids from the ward in the nursery, and Logan got to play with them until Dustin fell asleep. Then we headed back to the chapel to finish up conference.

With the two boys I didn't hear much, but the little I did hear was good. It was potty break, fussy not napping baby, potty break, listening. We got a new stake presidency. I don't know any of them, but they all sound good.

This week has been a lot of spring cleaning and shopping online (swim suit for me and a button up for Dustin for Easter). I'm hoping to make the boys matching ties for Easter, but I'll have to pick out material first. Logan has gotten sick again. He has a bad cough, but hopefully he'll get over that soon.
Posted by Amy at 5:00 PM No comments:

The past week all went by in a blur. Last week Saturday Logan got to go to the Train Expo with Dave's Parents and his cousin McKay. They had so much fun! He's been living and breathing trains ever since. He's been wearing his Thomas shirt and jammies non stop. We've been playing with his train set too at least once a day.

Then it all went down hill on Sunday. Dustin and I woke up with coughs/sneezes/runny noses. So we stayed home from church to sleep. By Monday or Tuesday Dave and Logan were in the same boat. So we've been vegging in jammies, watching movies, and living off of soup and everything I had stocked up in the freezer! Dave stayed home from work Wednesday, but Thursday morning his work called asking if he could come in (even though he was still sick). He ended up working until 9 at night and they needed him to come in again Friday. No way to get better!

Thursday I was feeling a little better, so I started cleaning. The house was trashed! I cleaned, did laundry, dishes, and made a grocery list. Logan helped a lot. It was a lot to get done, but I feel like we just had to disinfect everything! I didn't really feel better until Sunday (so 8 stinking days). Dave and Logan are still sick (Dave way more so than Logan b/c he hasn't been able to rest).

Last Friday I went to the dentist too and discovered Dustin has ruined my teeth. Before I was pregnant with him I've had one cavity in my adult teeth ever. Just one. I brush twice a day (with a sonic toothbrush) and floss religiously nightly. The dentist says he can tell I do (don't ask me how, maybe he's psychic).

BUT 6 months ago at my last check up I had three cavities, and this time I have two more! I even added a nightly fluoride mouthwash to my regime, but it didn't help. The dentist says sometimes that happens during pregnancy (it changes the PH balance of your saliva to an acid that eats away at your teeth instead of a base that rebuilds them). So he recommended a paste to rub on my teeth and leave on overnight to help reconstruct everything. Hopefully my PH goes back to normal so I don't have to deal with this FOREVER.

Other than that, we've just been hanging in there. The weather has been beautiful, so we have made it on a few walks, but nothing major since we've been so sick. Hopefully we'll have more fun this week!
Posted by Amy at 10:54 AM 2 comments: