School's out for Summer! 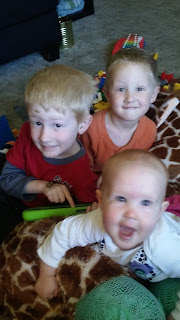 I don't know where the past month has gone! We have been so busy with school being out. I started a chore chart that the boys have to get done if they want any electron entertainment. They're relatively easy jobs, but it keeps them busy for most of the morning. 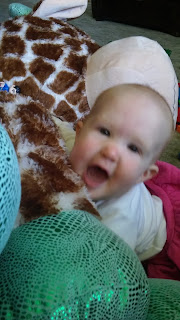 A few weeks ago some friends of ours had a yard sale before moving. Dustin purchased this oversized stuffed animal for a dollar. We bring it outside with us, snuggle at night and read books while leaning against him. His name is Peachy. 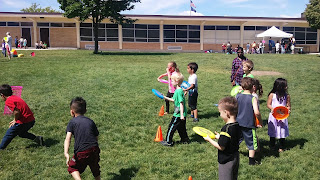 Before school ended he had a FIELD DAY! Dustin, Brooklyn and I volunteered to help. It was fun to work with all the classes, but especially to be able to see Logan's class and how he interacted with them. He's grown so much socially (as well as intellectually) this year. 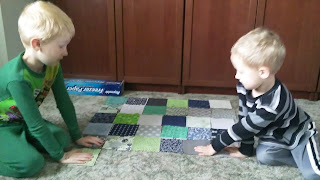 One of the boy's jobs is to learn something every day. So I asked if there was anything specifically they wanted to learn about. Logan said he wanted to have sewing classes. I let the boys pick out a few materials from JoAnn's, then I mixed material from my scraps/stash and we are working on  making a quilt. Both boys helped me lay it out, but Logan is the only one interested in helping me sew. 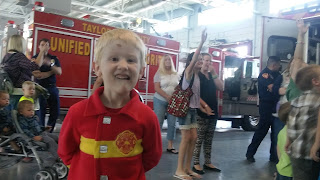 A few weeks ago we also got to go on a field trip to the Fire Station. Logan insisted on dressing as a fire man, and Dustin dressed as a Lion. It was neat to see where everything happens. The station is pretty new and very well designed. The boys loved asking questions as well as getting to climb inside the fire trucks. 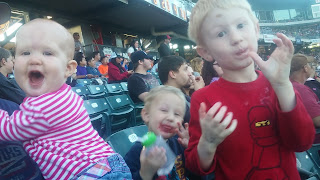 We also got to go to a Beez game! Papa Bill got free tickets through work and we had fun watching the game, buying treats and watching the fireworks after the game. We usually keep the kids up for one firework event a summer. We usually do the Taylorsville Days show, but since we had front row seats to this one, we figured why not? Also, the show started at 9:30 so earlier home and to bed than the 4th of July ones. 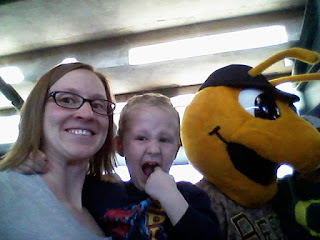 Every game we chase down the Bee. The boys play iSpy until they find him then we run around until we can meet him and take a picture (Logan refused to get close enough for a picture). 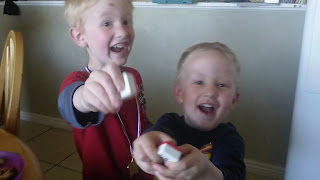 The boys recently rediscovered Grandpa Yoder's clickers. They chase me around the house tormenting me. Little do they know I actually enjoy the reminder of my Grandpa. 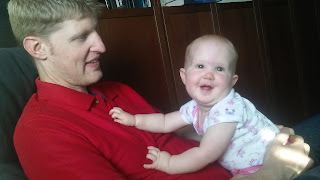 Brooklyn's been thinning out. Don't worry, she still has her double chin, wrist rolls and thunder thighs. But she's been crawling all over the place and as a result is loosing some of her baby fat. She also has been speaking more. She says Dada, No, BooBoo (the boys nickname for her). She also started saying Mama but only in a monster voice (as the boys call it, super deep and guttural). She's still a Daddy's girl except when she doesn't feel well or is super sleepy. 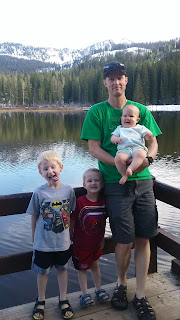 Last weekend we hiked around a lake! It was the perfect temperature; in the 70's in the mountains (90's in the valley). There was still snow in the mountains, so we had to navigate the stroller around that and the mud puddles. But the boys loved having snowball fights and splashing in the runoff. 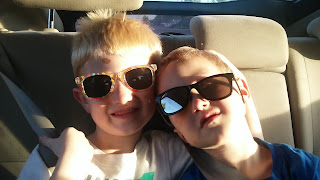 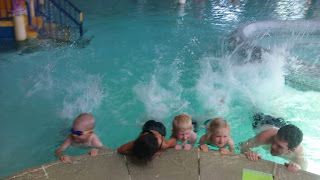 Logan has had swimming classes last week and this week and I'm so proud of the progress he has made! On class 4 of 8 he was swimming on his own! This is HUGE for Logan (he's usually a little scared of water). He is no longer afraid to put his head under and he chooses to try the different strokes on his own. 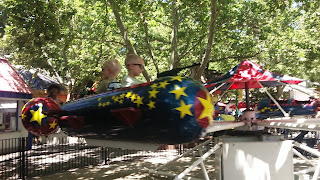 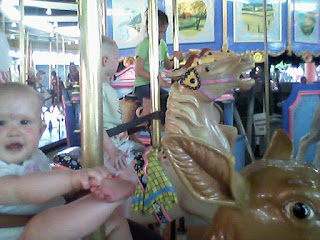 Brooklyn had her first ride on the Merry go Round as well as the Ferris Wheel. She enjoyed them and was a great sport, especially considering she missed a nap and got home for bed way after bed time. 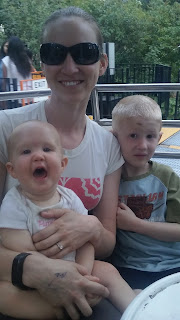 Around 7pm both Brooklyn and Dustin had fallen asleep. So Dave and Logan rode some of the bigger rides until I insisted it was time to go home. Somewhere in there we also enjoyed Lagoona Beach. It was fun to see Logan use his new swimming skills. 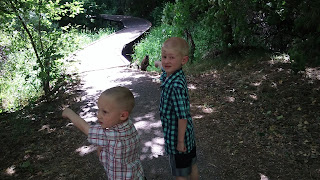 This weekend we also had a visit from my friend Tenille. She helped us pick out some plants for our yard (she loves gardening). I helped her with a quilt. And we went on a Treasure Hunt (ie. went Geo Cashing). The treasure is located at Wheeler Farm. You bring a prize to leave, and you get to pick a prize from their treasure chest. Logan had been before, so he showed us which way to go. They had so much fun doing that as well as seeing the animals. 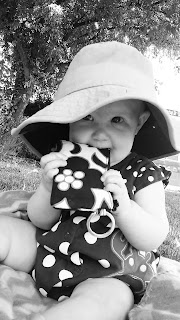 It was great to see Tenille and eat ourselves silly! We got milkshakes, slushies, Penguinos (Mexican Bakery treats), Pizza... all the good stuff. We also rented Beauty and the Beast from Redbox and finally got to watch it. It was well done.
Posted by Amy at 3:17 PM No comments: