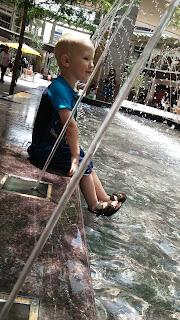 We had a fun 4th of July weekend! Before it started we brought a picnic lunch downtown to eat with Dave. We went to the mall, ate our lunch and the boys played in the splash pad. They had a blast! We really should do that more often, but it's a lot of work for me (prepping everything, catching the train, and making sure we make it home by nap time). Then everyone at Dave's office left early, so he got to too! It was a nice surprise to start the weekend a few hours early. 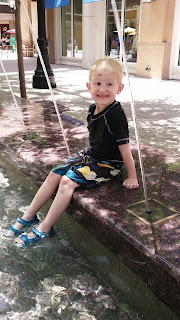 We did a hike to and around a lake on the 4th of July and the boys had the best time! They saw ducks with their babies, tons of electric blue dragon flies, chipmunks and squirrels, and tons of birds. The boys were enamored with all the animals and Dustin kept trying to catch them so he could "snuggle them". We tried real hard to explain the animals were wild and would probably bite him if he picked them up, but I don't think it sunk in. 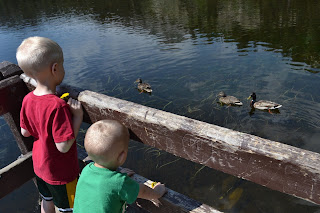 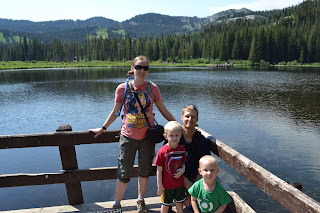 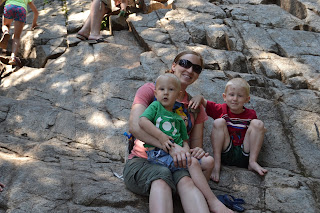 Saturday night we brought a picnic blanket to the Beez baseball field, parked outside, and enjoyed their firework show. I highly recommend this for anyone with little kids. The show started "right after the game" which ended up being 9:30, and was over by 10. So instead of fighting crowds, insane traffic, and the show not ending until 11, the boys were asleep by 10:30. They really enjoyed the show, although complained that it was too loud. Logan loved pointing out every time his favorite color was featured. 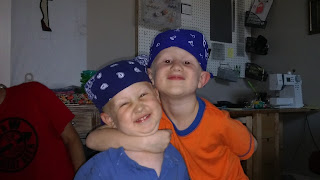 On the actual night of the 4th of July we went over to my brother Mike's house for a BBQ and fireworks. The kids had a fun time playing and enjoying each other's company. Dustin got a little nervous with the louder fire works, but over all it was a good time. 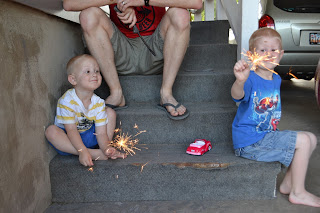 Dave was at Scout Camp starting Thursday of this week. We missed him like crazy, but were able to get a lot of cleaning, cooking and some sewing done while he was gone. The boys would come into our room each morning looking for Dave, and sadly ask "when will Daddy be back?" so we were happy when he arrived early Saturday morning.

I was able to get the office/sewing room re-organized and start working on a few baby projects. My friend Tenille gave me several white onesies, so I decorated them. I also made a new changing pad for the baby's room (it's far more girly than the last one and will match the quilt my Mom is making for the baby). Other than that I sewed a few squares for the quilt I started at the Yoder quilting retreat. I'm trying to get it done by Christmas... but we'll see how that goes with the baby coming soon. I cut out and started to sew a blessing dress for Brooklyn. I really hope it turns out. We'll see soon!

For the 24th of July weekend we got to see most of Dave's family Saturday night. Jon had a BBQ and fireworks. So we chatted and the boys played until about 9:30. Sunday was just a typical day, but Monday Dave had off work. So Sunday night Dave and the boys had a campout in the living room. Dave was back in bed with me by 12:30 and Dustin joined us around 6. Logan woke up at 7:30 very disappointed that he was the only one left in the Living Room. Monday morning was really casual. The boys played outside and I got some cleaning done.


Now that it's July I've had the need to clean and cook like crazy! Just 2 to 4 weeks until the baby is born (technically she could come any time now). I've organized and stocked the pantry, snack cabinet, medicine closet/bathroom, and freezers. Last week I finished cooking freezer meals. It's funny, I like to have enough food in the pantries to be able to eat from for at least a month, but we probably have enough basics to feed us in there for 3 months right now.


So this week I've been working on deep cleaning (and with all the cooking and freezing I've been doing, cleaning has been seriously neglected). The kitchen is almost done (I just need to reorganize the freezer and wipe down the inside of the fridge). The master bedroom has been re-organized and cleaned out (I will just need to put away maternity and get out nursing clothes once the baby is born). The upstairs bathroom has been deep cleaned (the grout is a shiny white... we'll see how long it lasts).


The baby room is almost done (I need to put away my latest project clothes and gifts people have given us, all stacked on the changing table). Also I need to make one more girly decoration for the wall above the crib. But my Mom is making a baby blanket, and she is sending me the scraps from that which I'll probably make a wall hanging out of. So the basement and the boys room are left to clean. Oh, and I guess I need to vacuum out the car and re-organize the shed. So that's why I haven't posted in a month... blogging hasn't been on my list of to do's, but the cooking and cleaning details are just boring!
Posted by Amy at 8:24 AM No comments: