This week has brought about change. Well, one change, a new calling for me. I am now the Relief Society Secretary. Dave's response: aren't you too young to be in the Relief Society Presidency? Well, I guess it is just secretary. My responce: that will be a lot more work than RS teacher... But one of my fave ladies from the ward was called as second counselor (RiKelle, also in her 30's) and the pres and 1C were previously in the presidency. So we should have some fun and be able to get the job done too!

I am also still teaching until we can find replacements for RiKelle and myself. Sunday I taught a lesson on covenants, and the High Priests joined us, since their teacher called in sick. It ended up being fun (the high priests like to give me a rough time and I like to razz them right back). I actually miss teaching Sunday School (less tears than Relief Society), so it was a fun kind of a flash back to Gospel Doctrine teacher.

Friday Dave's work participated in a volley ball tournament. They had a t-shirt design contest (for their uniforms) and Dave's design won! Also this year they wonder the loosers bracket! That means they lost the first half of their games, then they won the rest. Every year they swear to practice so they can win next year! It rained for most of the tournament, but the dinner after was under a pavilion, so that was good. They had a bbq company cater, and they had a fabulous chocolate mud slide ice cream pie for dessert.

Saturday I went to Dave's Brother Jon's baby shower. It was small, just family, and it was nice to get to see everyone. Saturday night we had a ward game night. We meant to just stop by and say hi, but ended up staying for 2 hours. Logan won the cake walk (I encouraged him to just take a cupcake rather than a huge cake). He also went fishing and won some play dough. Dave played some bang with the scouts he is over, and other leaders. Dustin and I played a word game (it required spelling, which meant I lost horribly). Logan had so much fun playing with the other kids.
Posted by Amy at 3:25 PM No comments:

It's been a busy week for us! We were supposed to go to the cabin this weekend with my family, but it got canceled, so Dave and Logan went with Dave's Dad to the Father Son Campout (our ward doesn't have one). They had tons of fun!

Dustin and I went shopping at Kohl's. They were having their 60-80% off sale and I had a $10 off coupon. They didn't have a lot I was interested in (tons of neon and bootie shorts), but I did find a pair of sunglasses for me and a swimsuit for Logan next year. I spent $7 "and saved $50. Just tells you how much things are over priced!

After Dustin was sleeping, I did some sewing. I started and finished my square for quilting class (appliquéd poinsettia). I decided to machine appliqué this year, and it went so much faster than by hand.  I also worked on a few of the 21 bags I'm working on. Oh, and I finished some spit up cloths and a baby blanket for a shower this weekend.

Monday I started doing daycare for the 2 girls down the street. It went really well. Logan and Abby (the oldest) had so much fun playing with every toy Logan owns, and jumping on the Luv Sac. I would hear giggles and shrieks from all over the house. And Madelyn would crawl after them to see what the big kids were up to. I think it will work out well.

Tuesday the boys had doctor's appointments. They're both looking good! Logan's had a runny nose and a little cough lately. The Dr said it's just seasonal allergies. I have really bad outdoor allergies too, so I shouldn't be surprised. She prescribed him some medicine, but it doesn't do much good. I'm hoping to try some essential oils next week. I have to purchase them first, but then we'll see how they do. We just love them to clear up stuffy noses for colds, and the lavender was a life saver when I had shingles.

Wednesday I was supposed to babysit again, but the mom canceled, so we spent the day making salsa! It took all day to chop up the peppers, onions, and blend up the tomatoes. Dave had scouts Wednesday night, and I was able to convince him to take Dustin with him. We got it all 29 jars canned by 9. Hopefully we can do one more batch later this year, and we'll call it good! Dave also wants to can Jalapeño jelly and some spaghetti sauce. We'll see what we can squeeze in!
Posted by Amy at 10:45 AM 1 comment:


Friday was Logan's 3rd Birthday! He's been excited for it all week long. Wednesday and Thursday nights he woke up several times in the night just to ask "is it my birthday yet?" I wrapped his gifts on Wednesday and put them in the living room too. He would bring me one at a time, asked me who got it for him and guess what it might be. He would also use the gifts to make towers (like blocks). They were so tempting! 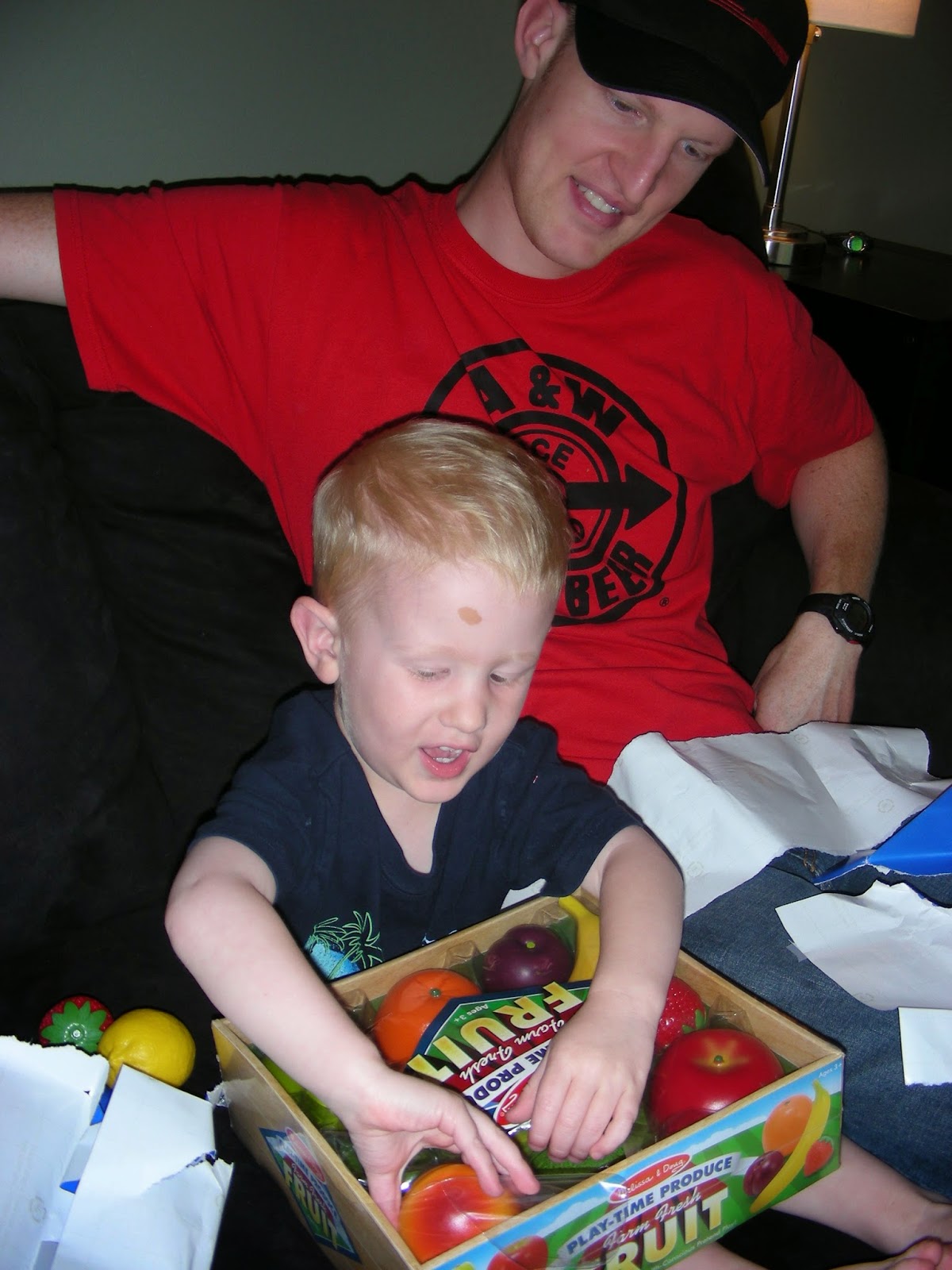 So when he woke up Friday morning he was so excited! He asked to immediately open gifts, but we decided it would be best to wait for Dave to get home from work to open them. We played all morning and went to the park to enjoy the swings and slides. When Dave got home, Logan cheered and rushed into the living room to the stack of gifts. So we opened them immediately.

We went to the library and discovered a little chlorinated river behind it that we had to splash in (and get completely soaked). So with our new books and wet clothes, we headed home for dinner and dessert. 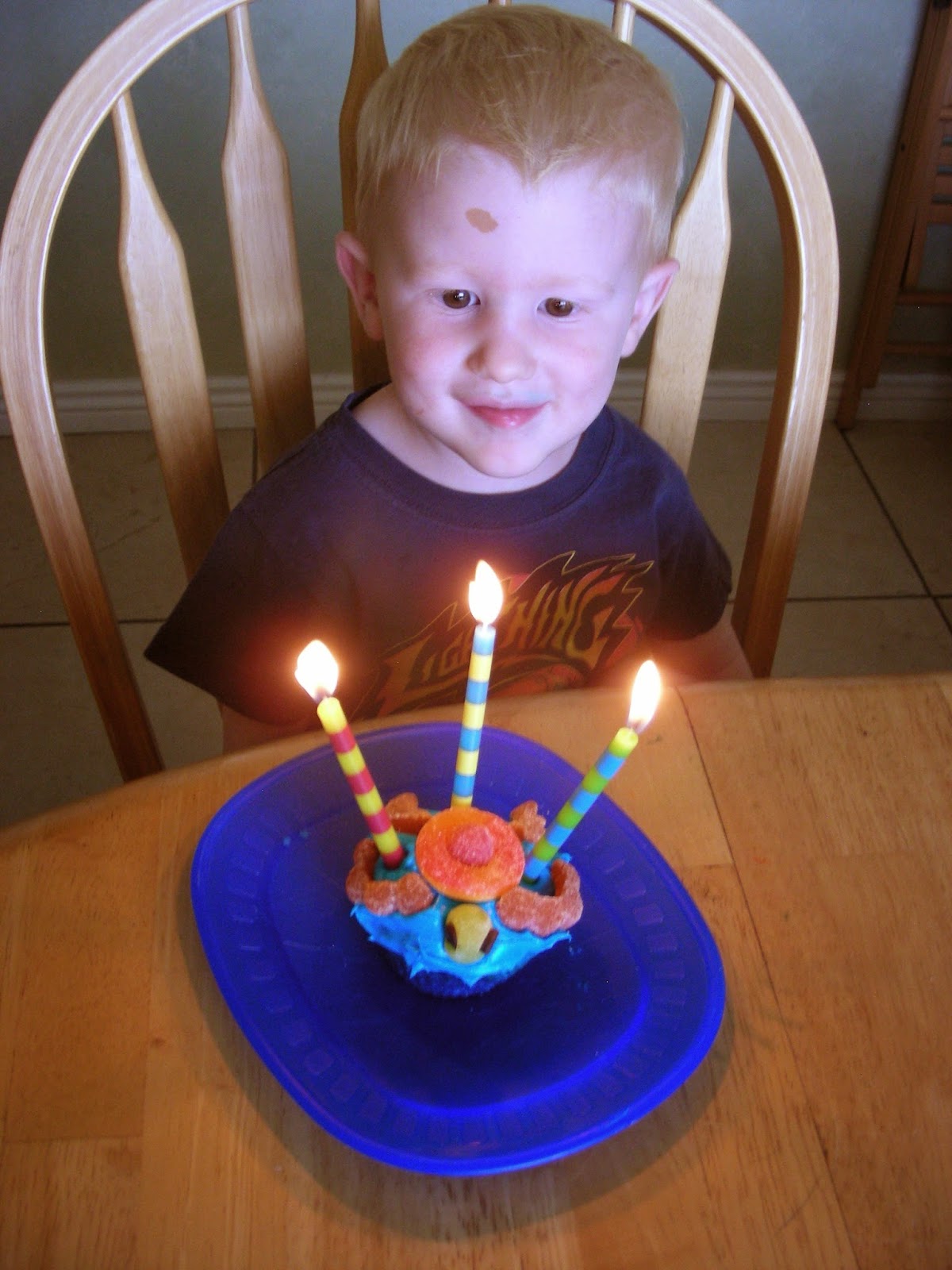 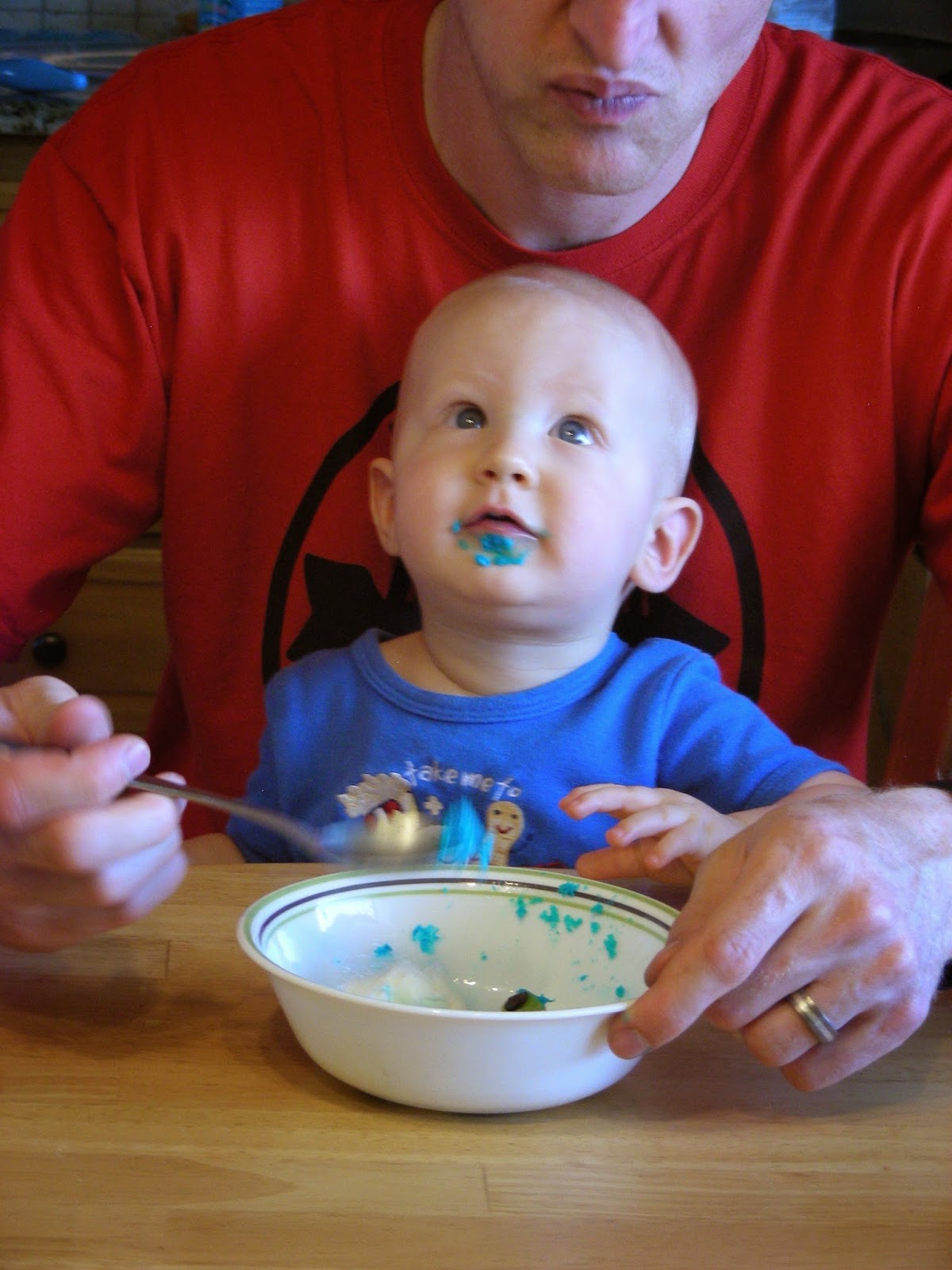 Logan requested eggs and hot dogs for dinner, so we compromised and had eggs, sausage and grapes. For dessert Logan requested blue cupcakes with a turtle on top. I was able to make turtles out of candy.
Since Friday is also our anniversary, Saturday my parents offered to watch the boys so we could have a little date. They took them to the aquarium! Logan has been talking and dreaming about it ever since! He loves fish and turtles. 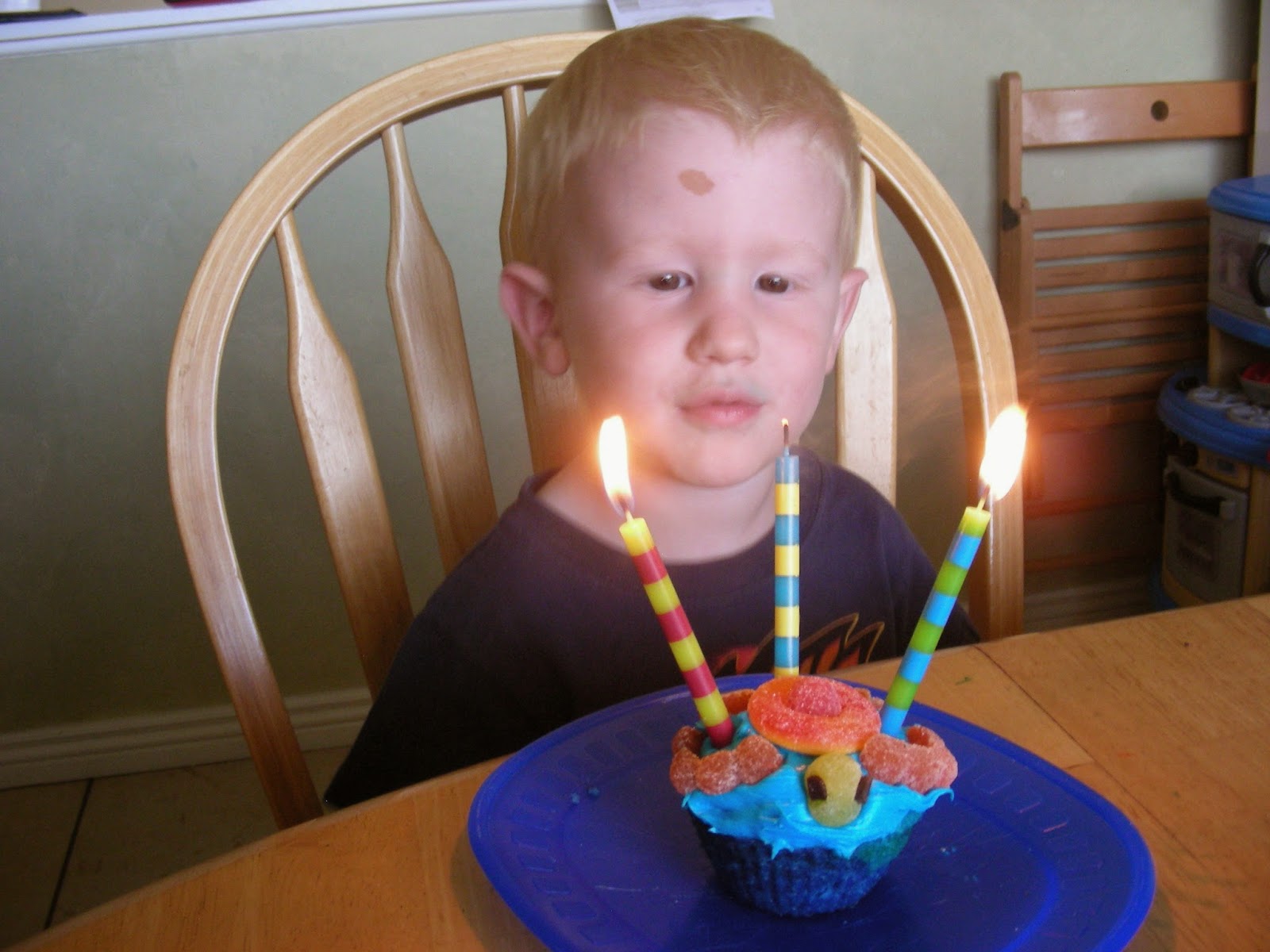 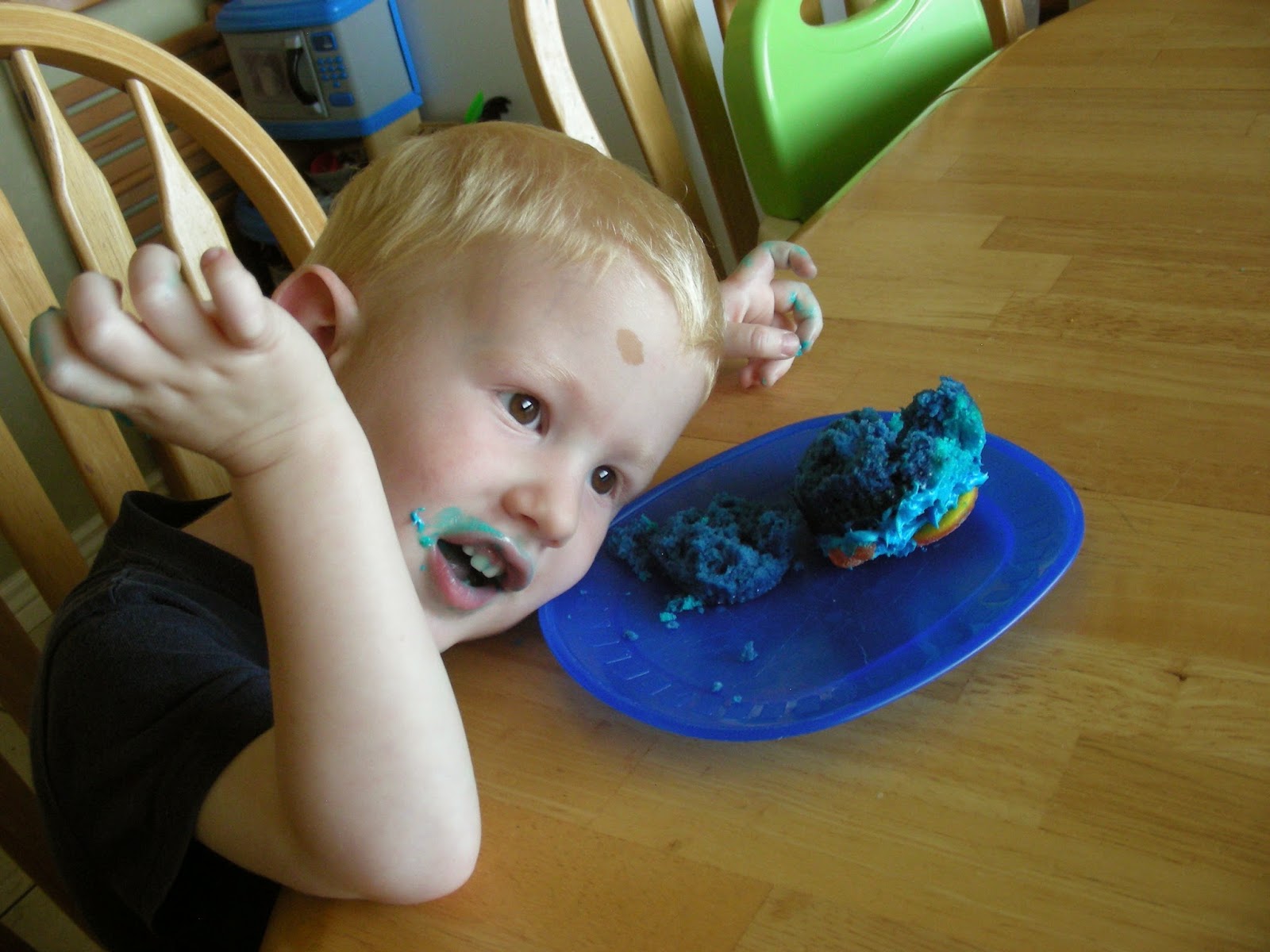 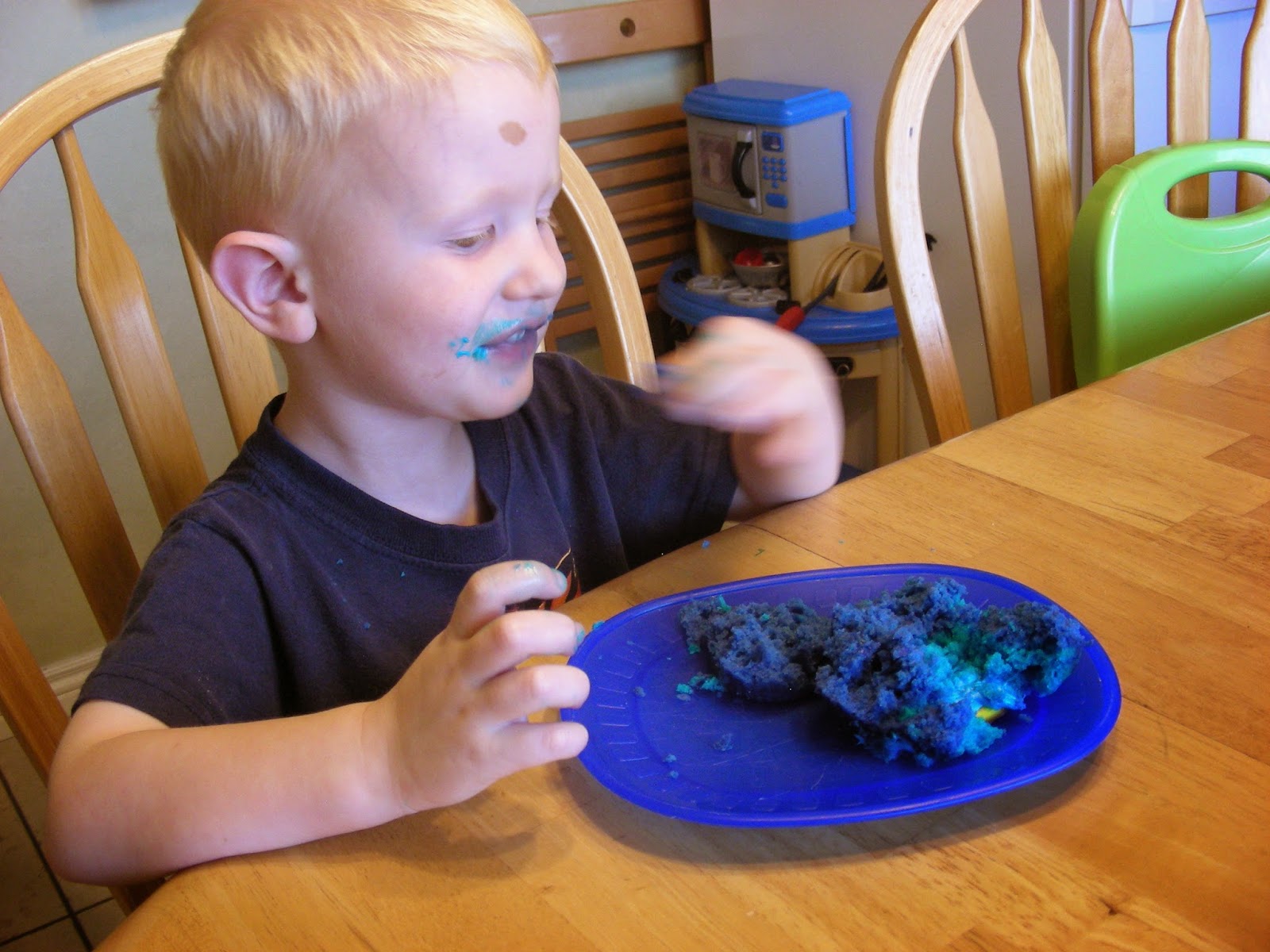 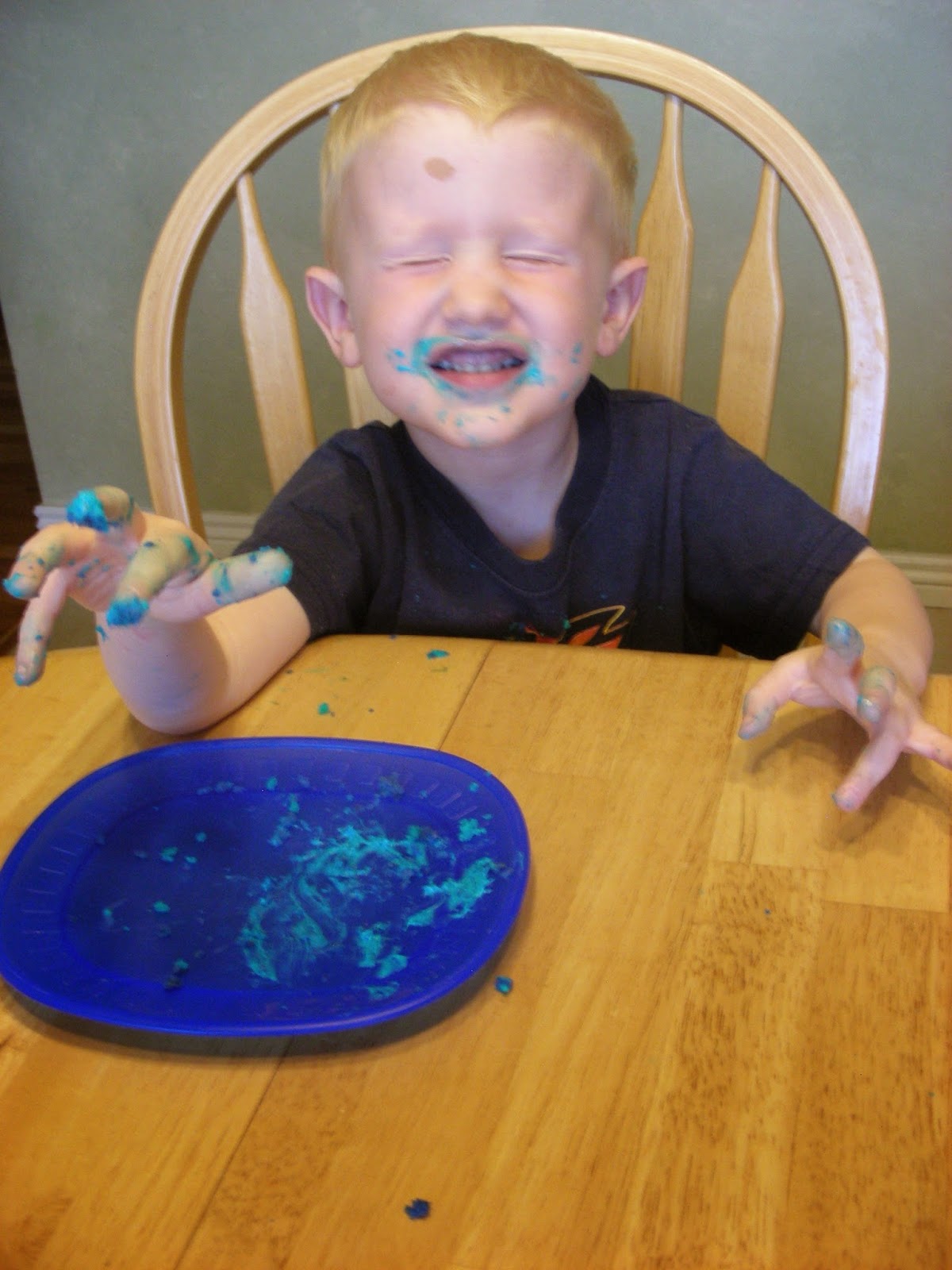 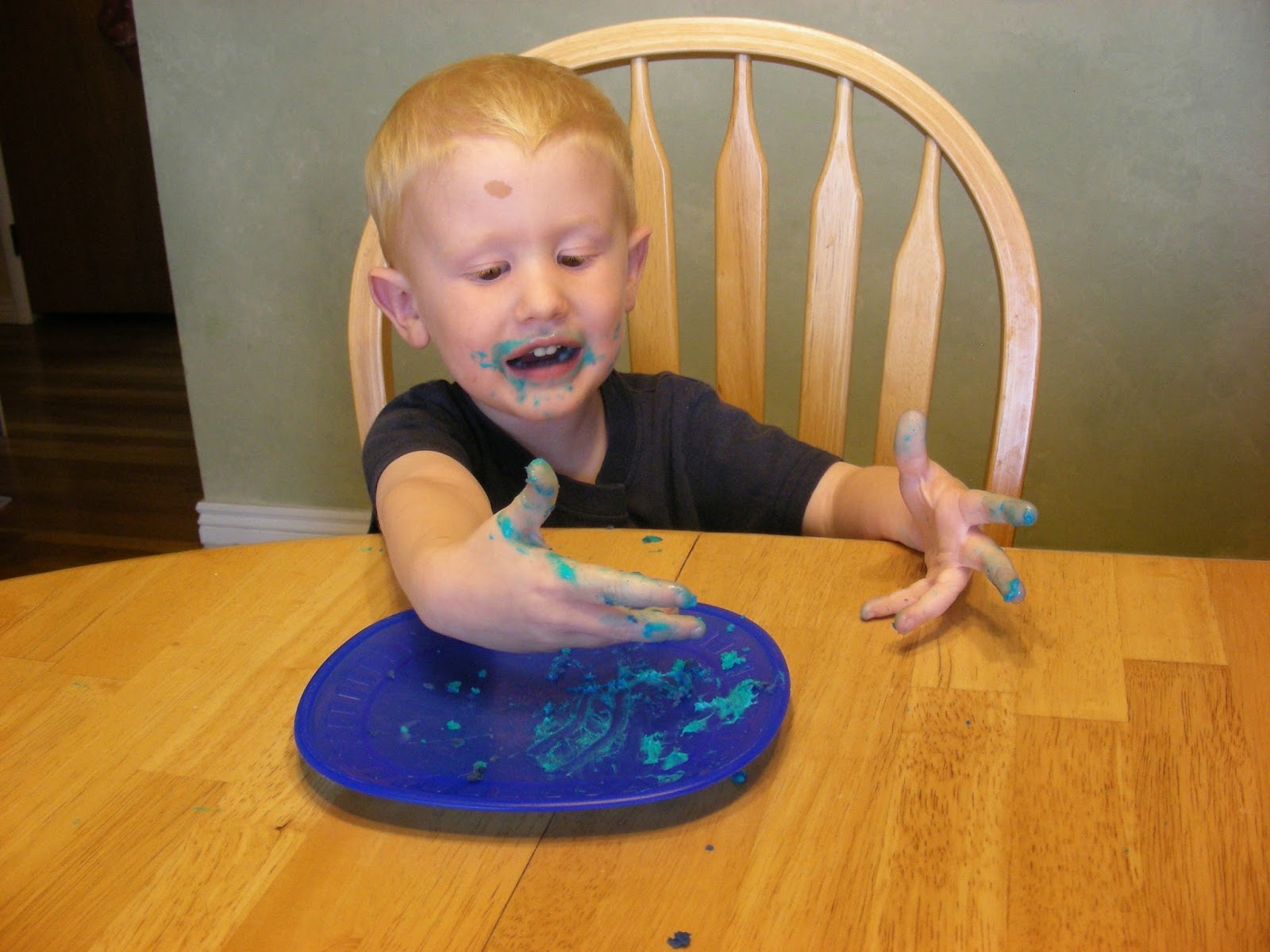 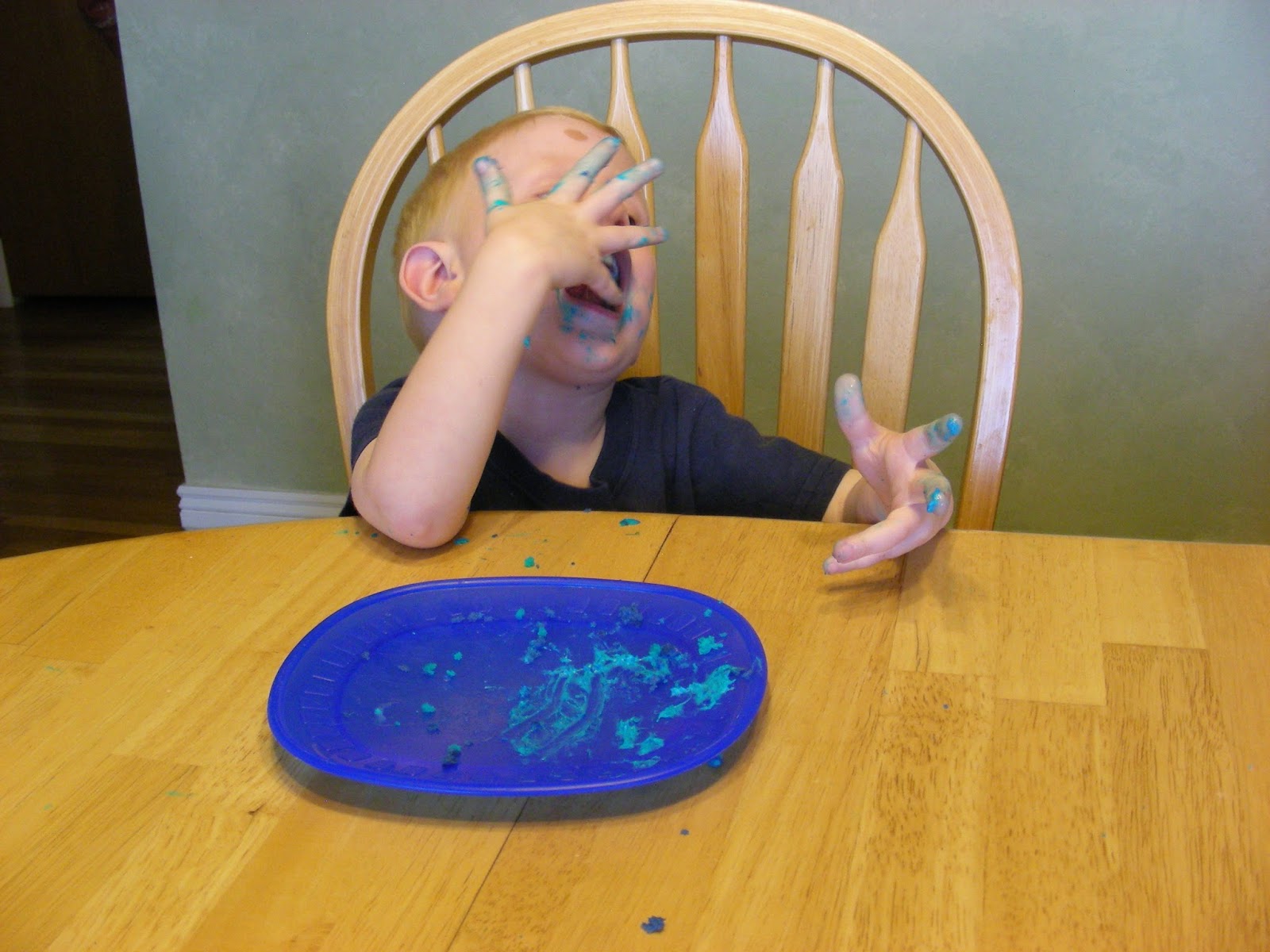 What can I say, the progression of cupcake eating was so funny, I had to document it all! Especially the "if I close my eyes and wiggle my fingers another cupcake will magically appear... Nope, but oh! there's frosting on them! I must eat it!" He totally cracks me up! Dustin enjoyed the blue too.

Dave and I stuck with the aquatic theme and went to Red Lobster for a quiet lunch. It's so nice to get to eat and talk without wrangling little people! After that we walked around downtown. We then stopped by Target and bought a few fun things. It was a nice little break. Nothing earth shattering, but just what we needed.

Sunday was more casual. After a rough church, we baked some cookies for a sick neighbor, then decided to visit the park. We swung, slide, and walked on the trail until bed time. It was very relaxing and the weather was perfect! We just wish we would have brought bread to feed the ducks.

Monday evening Grandma Linda and Papa Bill came over to bring Logan a birthday gift! It was nice to visit with them. Logan loved asking Papa Bill what animal he had again and again.

Last week I accepted a daycare job. I will be tending two girls (Logan and Dustin's ages). It's only for 3-4 hours Mondays and Wednesdays (so 7ish hours a week). I'm excited to have a way to make a little extra money (for Christmas & our trip next summer to NC). I know the older girl (Abby) from Nursery, but I don't know the baby (Maddy) and am a little worried about taking care of two babies. It's like two sets of twins! But I'm sure in a month we will have settled into a routine and will be fine! Kids adapt well, and it's not like it's an 8 hour a day job.

I've been praying about finding a way to earn just a little extra money without having to work outside of the home, and this seems like an answer to that prayer. It's not a ton of money, but it's just what I was looking for.
Posted by Amy at 12:42 PM 4 comments: