We survived last week!!! It was a rough one. Dustin was sick up until Wednesday. Logan was really ornery for most of the week. And I was sleep deprived again. It's starting to be the story of my life. I guess that's what we get for having kids ;)

Thursday Dave had a half day of work! So we went to the library to get some new books and a few movies for the boys for the long weekend. It was also the Library's book sale, so I picked up 10 books for me and 4 for the boys. They were 10 cents a piece, so I really couldn't go wrong! I've read one already and loved it. Logan and Dustin have also loved the 4 books I got for them, so we already got my money worth. After that we swung by the lazy river behind the library and swam until a half hour after bed time. I love that we have free access to water whenever we want to swim!

Friday we did a little yard work in the morning. The boys and I picked raspberries, tomatoes, zucchini (Logan's favorite to pick). We got TONS of all. Then we did some weeding while Dave finished up the mowing, weed whacking, and re-lining a flower bed with weed barrier. My friend Tenille dropped by after lunch to share some quilting patterns with me (we've been collecting this year's Utah Row by Row patterns). I then did pedicures for the family. I was doing mine when Dustin came over and said "Mom. Toes. Peeeeese?" So he ended up with 2 blue toes. Logan and Dave just wanted trims.

That evening we went over to Dave's brother Jon's house for a BBQ and swimming! They had a killer kiddy pool that all the cousins loved. Everyone was there, and we got to visit until past bed time. Saturday Dave started the day with a run, and we took a casual rest of the day. We went to the park, played duplos, watched a Transformers movie, only fun stuff! Sunday was the same. After church we just cooked dinner and relaxed until the AC died… it was 95 degrees out so I thought we were going to die waiting until the repair guy came Monday at 3.

Fortunately at noon Monday storm clouds blew in and the temperature dropped back down to 70 degrees. So we survived pretty well until it could be fixed. We spent the morning at Lowes pricing out new shed doors, so we were in the AC until it cooled down (when we woke up at 7 it was already 78 degrees, so I thought an air conditioned place was a necessity). I decided a "new" door was too expensive (it was going to cost $700 since the opening is a custom size), so I've conned Dave into making me one. I'm sure he will do a great job!

For FHE we went to Murray park and fed the ducks! They have a running/walking trail that follows a river, so we walked along that. Every 10 feet or so Logan would insist on running down to the bank and search for ducks. We fed three different batches of ducks. My favorite was a Mom with 7 little baby ducks! But we enjoyed feeding all of them. By the end of the trip Dustin realized he wasn't supposed to be eating the bread, and he was supposed to throw it. Which increased his enjoyment substantially.
Posted by Amy at 9:15 PM No comments:

I'm having a hard time remembering what we did for the past week. Somewhere in there we played with some neighbor kids. Friday the boys spent the day at my friend RiKelle's house while I helped my mom pack up some of the moving van. Friday night we all headed back to help finish up two of the three vans with Dave. I don't know how much help the boys and I were, but Dave helped with the furniture and big things.

Saturday night Dustin came down with a bad cough. Deep in the chest, honking like a little pitiful duck cough. Sunday I kept him home from church while Logan and Dave went (Dave had to teach Sunday School and Elder's Quorum). When Dave and Logan left it was so pitiful! Dustin stood at the door crying "DAAAAAAD!!! and knocking. We had a slow, casual Sunday to try to help Dustin rest and heal.

He was still sick on Monday, and it was just a terrible, horrible, no-good, very bad day for all of us! Dustin's cough only got worse, so bad that he would cough and cough until he threw up. The past two nights he woke up at 1 and two and didn't get back to sleep until 5 or 6. So I was totally exhausted. Dustin too. Logan was ornery from not being out of the house for a few days. We slowly survived the day (Dustin took two 15 minute naps, I didn't get any!). By 6 we were dieting for Dave to get home. But he had to work late. So we put in the third movie of the day and just waited for bedtime.

Just as I decided it was late enough to put the boys to bed (7:30) there was a knock on the door. The guys in the basement had a flooded toilet (which apparently had been flooded all day). Why they didn't tell me earlier in the day was beyond me. So I went downstairs, cleaned up the 1/2 inch water and ascertained the problem (between the bowl and tank), and headed to the store to buy what I thought I needed, and called Dave to get him to head home and my Dad to verify what I was buying. By the time I got home with the parts, Dave was home too. So I sent him down to do the install while I got the boys to sleep.

An hour and a half later, the boys were finally asleep, so I headed down to help finish up. Well, the bolts holding the toilet together were rusted on and stripped, so Dave hadn't been able to even take it apart! We were able to saw the bolts off, and finally get to the root of the problem by 10:15. BUT more than the 3 pieces I bought were broke, so we needed more parts to fix it. The hardware stores closed at 10, so we were out of luck for the day. 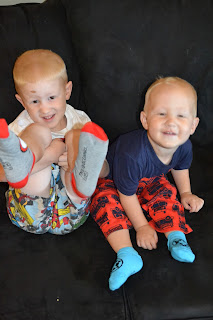 We cleaned everything up and got to bed by 11:30. We woke up at 6 the next day (with Dustin and Logan both getting up in the night me being up again from 1 to 5). We were able to get the toilet fixed and put back together by 7:30 (before the boys woke up) and Dave headed into work. Fortunately the boys were less ornery Tuesday (had to be a blessing, because they were sleep deprived to the max by now).

I had to go to Walmart to get some dishwasher soap (did I mention we had run out of that too?), so we all decided to get a treat while we were out. The boys picked out a pack of fancy socks. Logan got super heroes, and Dustin picked Star Wars. I picked nail polish, and I got Dave a channel locking pliers (the same one I have and he had been coveting during our plumbing fiasco). The boys wore all 6 pairs of sock throughout the day, and wouldn't stop dancing around for me to take a picture (and yes, we have spent the past 2 days in PJ's, but we did change into clean ones for bed).

Dave got home from work on time and let me sit and read while he played with the boys. They went to bed relatively well, and actually slept through the night and up to 8:30 this morning (another blessing!). So I'm feeling a lot better today. I don't do well without sleep. Now if we can just survive today, Dave has a half day off Thursday and all day off Friday for the 24th! So here's to a long, horrible beginning of the week!
Posted by Amy at 11:32 AM 2 comments: 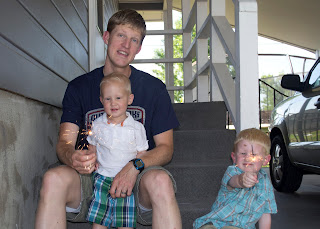 I feel like the past few weeks we've just been in survival mode! I guess that's what happens when Dustin gets 3 teeth in a few weeks. I don't do well without sleep, so what can you do? For the 4th of July Dave had a half day Thursday and a full day off Friday. Thursday as soon as Dave got home we went to visit our friends the Terry's. They were here from Indiana, and we met them at her family cabin up Provo Canyon. It was great to get to catch up and spend the afternoon with them.

On the 4th we had a casual day with waffles for breakfast, and Fireworks throughout the day! Logan LOVED them! My parents had a dinner and cupcakes for the summer birthdays, followed by a firework extravaganza! They one kid at a time pick out which firework to light next, and even Dustin loved watching them blow up (although we weren't a big fan of the loud noises).

By the time we got home the neighborhood was lighting their fireworks, so it was impossible to get the boys to sleep. I gave up around 9:30 and we all climbed up on the roof to watch the show. We Dustin fell asleep on the roof around 10 and Logan's eyes were getting heavy around 10:30 so we called it a night. 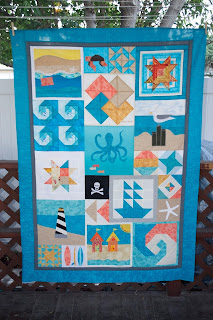 I've been doing a lot of sewing in my spare time! This quilt top is from the Yoder Reunion, and I've got it about 66% machine quilted. I'm dyeing to get it done, but it's slow going since I'm experimenting with new quilting patterns. It's going to be great once it's done though. I also just finished and got paid for hemming some pants for a lady that's friends with a friend of mine.  It's mindless sewing, but doesn't really take too long to get done. 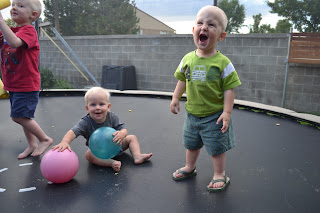 Dave has been lamenting not going camping this summer (it's been WAY too hot!!!). So we decided to do a family "campout" Friday night. Mike texted asking if we could babysit Friday, so we decided to do it with a few cousins! While Dave was building a fire the kids had a blast jumping on the Trampoline. Even Dustin and Tim (who I thought were too small to jump with so many kids did great). 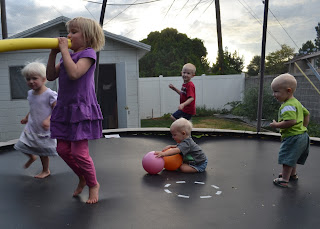 They probably played on the tramp for an hour before it was time for Smores! Tim and Dustin had fun collecting the balls (and Dustin would try to bounce on them). 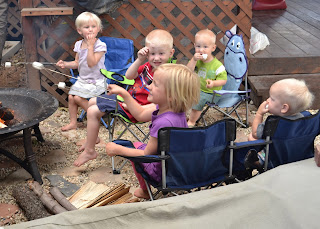 They were all great with the fire! Nobody tried to touch it, and the only one to light their marshmallow on fire was Dave. To which Sarah responded "Don't worry Uncle Dave, I like it that way. I will eat it." 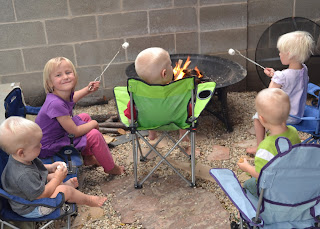 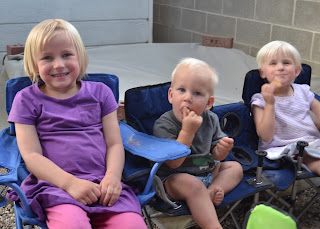 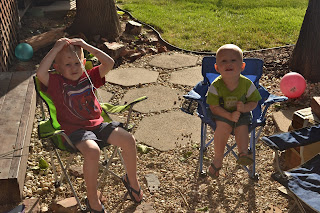 We had a great night! Getting the five of them all to sleep was difficult, but eventually we got them all down.

Other than that the boys and I have had a lot of fun playing at the park, lazy river, or just in our back yard (but especially when friends come with us). We've also started letting Logan pick part of FHE. The first two weeks we tried this he got to pick the activity (he chose running through the sprinklers and game night). This week he got to pick the lesson (he picked the Holy Ghost).
Posted by Amy at 3:01 PM 2 comments: