The Christmas Quilt is DONE!!! 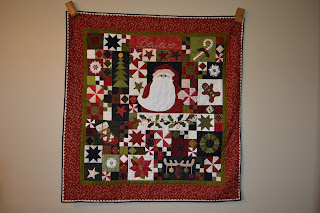 It's done! It was a ton of work, but I finished in time for December!!! And I love it. Dave thinks it's cheesy, but I'm the decorator, so I get to pick what goes up ;)
Posted by Amy at 9:46 AM No comments:

This week was Dustin's 2nd birthday! Logan has been counting down for a week and helped me to wrap his gifts. Dustin loved all the attention and the presents. 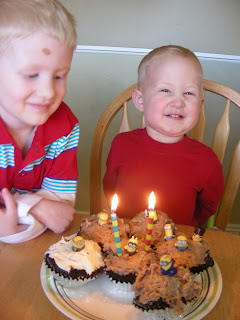 Dustin wanted Minion cupcakes, so I found an 8 pack of little Minion toys at Walmart, and we put several on each cupcake. Both boys have loved playing with these little guys since then. And they're pretty cute too. 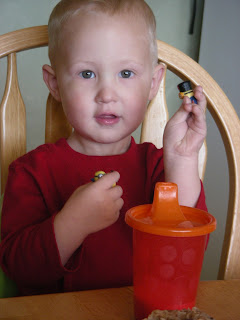 The boys had fun taking pictures. I found 100 pictures on the camera from Logan and Dustin. They were a mess! But fun to look at. 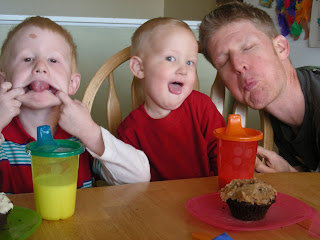 Dustin's favorite gift was probably his Batman hoodie. It has a mask attached that he pulls down to look like Batman. He'll pull it up, laughing, and tell me "Is Dustin, not Batman!" What a stinker! 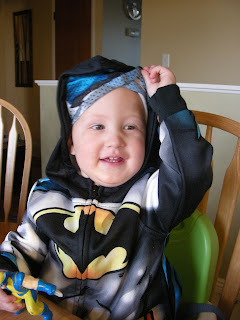 My favorite was an early birthday gift. I finished Dustin's big boy blanket a few weeks ago, and Dustin insisted on it being on his bed immediately. I love how it turned out! 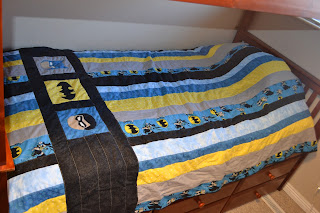 This weekend we winterized the yard too. Logan helped us bag 12 bags of leaves. We have a few more leaves on the tree, but it's supposed to snow this week, so we wanted to get most of the leaves off the grass. Logan loved climbing up on the wall and jumping into the big pile of leaves. 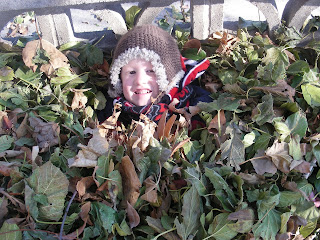 To Infinity and Beyond! 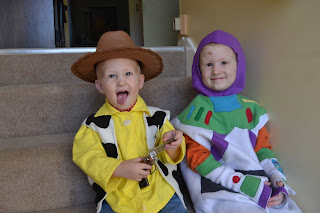 We had a fun Halloween weekend! We're still working on getting the house reorganized from the renters moving out, so we spent a lot of time cleaning and moving stuff, but we also had fun! 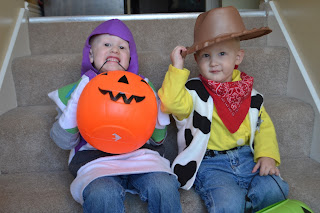 Logan decided MONTHS ago he wanted to be Buzz Lightyear and he wanted Dustin to be Woody. Dustin was pretty agreeable, so we slowly started collecting costume pieces. The fleece I had in my stash (free!), so I had to buy Dustin's shirt material ($1.00) and his gun ($1.00). So it was a lot of sewing, but a cheap costume year. 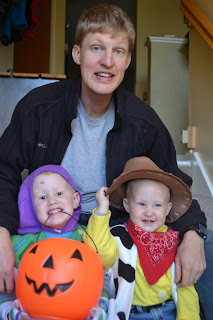 I started working on costumes for Dave and I, but it just didn't happen this year! We were going to be Barbie and Ken from Toy Story... Oh well! 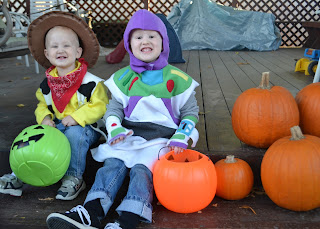 The boys had so much fun! For weeks  now Dustin would randomly yell out "WOODY"! Then I would have to explain "for Halloween he's going to be Woody from Toy Story" 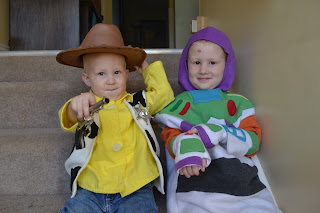 Dustin loved his gun and Logan loved his lazer (and his flip open communicator). I'd find Logan talking to his wrist "Come in Star Command!" 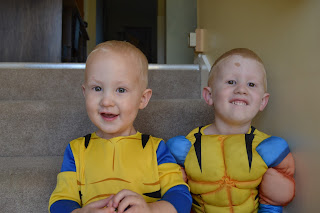 So, while at DI a few weeks ago I found Logan a Wolverine costume. So the boys have been dressing up as Wolverine when not the guys from Toy Story. How could I say no to $3?!? And Dustin fit into Logan's old costume from a few years ago. 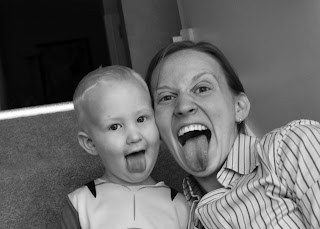 Logan wanted to take a silly picture of Dustin and I. He did a pretty good job!

Sunday Logan got up and bore his testimony. He's been practicing for two months and did a good job. We'll keep working on it, but he was proud of himself. Next week is his Primary Presentation, so now we're working on memorizing that.

Sunday a lady from church dropped off a punch to make gift tags (I'd ordered it from her friend a few weeks ago) and I was so excited I made 20 gift tags for Christmas presents, and a few general gift tags. I don't make cards often, maybe twice a year, but it's fun when the mood strikes me. So now I'm one step ahead for the Holidays.

Monday the boys and I helped set up for a funeral lunch at the church. I woke up at 6:15 to run to the church and get ingredients for Funeral Potatoes and we whipped that out before heading over to the church at 9:30. The boys were great! They helped put the table cloths on, carried the pitchers of flowers to the tables, and put out cups. Then they played the piano in the EQ's room while the ladies and I rolled up silverware in napkins. We got it all done pretty quick then we headed out.

Tonight we did a FHE on Gratitude. I want make a list of what we're grateful for every day until Thanksgiving. Then on Thanksgiving we can read over them all.
Posted by Amy at 5:35 PM No comments: 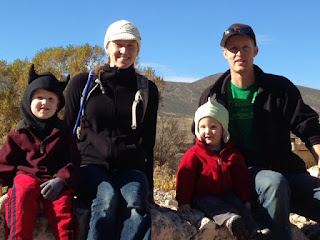 We spend 5 days last weekend visiting my parents in Casper WY! It was great fun to see them and to explore their new home. We got to do a few hikes and see the fall leaves. 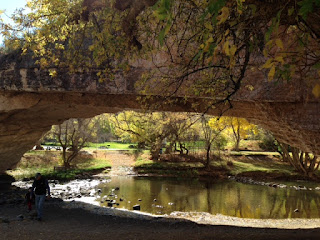 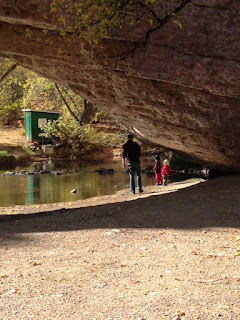 They also had a playground with old tractors and 4 wheelers and old playground equipment that wouldn't be aloud now (which was so much fun!) 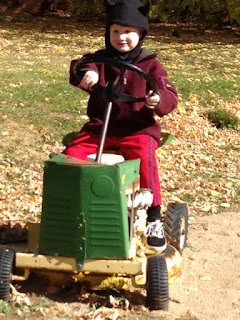 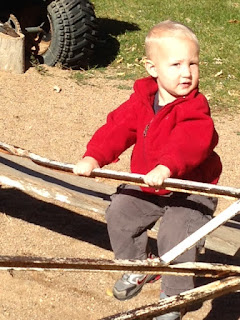 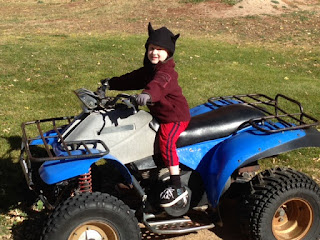 We also got to go to Martin's Cove and see some Pioneer stuff.  In one of the old cabins they had an old wolf skin. Dustin kept saying "Wolf" so my Dad took him over to see it up close. But Dustin was scared, so he kept bawling! so the whole rest of the day he kept telling us about "Scary wolf!" On up side, the boys were fascinated with the handcarts! We drug them all over all the sites in a covered one. It was a windy day, so it gave them some coverage. 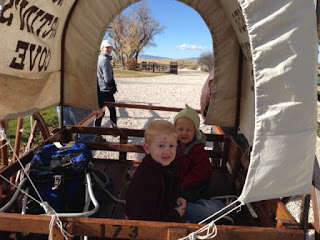 We also got to visit Independence Rock . We hiked up to the top of it, then down the other side and around back to the cars. Ww got to see tons of pioneer names, boy scout names, and graves. 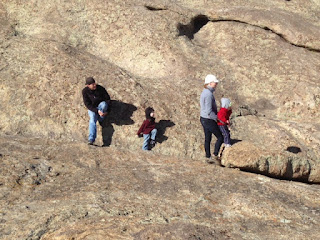 We saw so many animals on our trip! We saw antelope, deer, bunnies, squirrels, and birds. Dustin calls antelope "white bums" so whenever he saw one out the window he would yell as loud as he could "WHITE BUM!" Which would make all of us laugh. 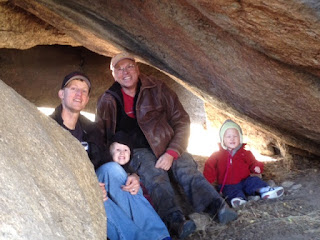 We also got to hike up to a waterfall. It was beautiful and the boys collected some pinecones for decorations.

It was a great trip! We got to do some hiking, visiting and catching up. We drove home very relaxed and rested. The drive was long (5.5 hours) but the boys did fabulous!
Posted by Amy at 4:27 PM No comments: