I look back on the past two weeks and it's really been a blur. I can't remember what days we did what, so I'll just spit out what we did as it comes to mind. First, why I'm a zombie. Brooklyn is teething. If we compare her teething experience to the boys, she's is substantially better (as I recall Logan didn't  sleep through the night for two weeks leading up to each tooth). Brooklyn has only lost a night or two of sleep per tooth, but she happened to decide to get all 4 front teeth in the same 2 week period. She has cut three and we are on our fourth right now. It's killing me!

Last week my parents were in town for my brother Dan's graduation and they stayed with us! The boys were ecstatic to show Grandma & Papa our new bathroom and make their bedroom "fancy". We loved getting to visit with them while they weren't out with Dan.

Friday we had a family dinner at our house. It was warm, but it sure was great to see the kids playing and to talk to Dan and congratulate him. We spent the evening chatting and eating pizza & ice cream.

The rest of the weekend was spent getting the garden ready to plant. It was busy and a lot of work (mostly for Dave), but we're glad it's done! 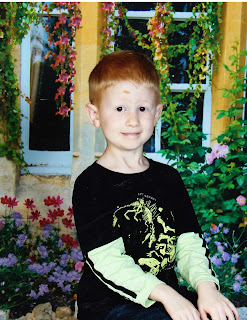 Logan also had a week off of school! He had to go in for a half hour for Kindergarden end of school testing, and the rest of the week was free! We went to the park, made slime, and visited my friend DeLenna out in Payson. We met up in Provo at the Rec Center and swam for 2 hours, then followed her home for lunch and all kinds of fun. It was exhausting but a great visit! We'll have to do it again.

The boys had so much fun that I decided to sign Logan up for Swimming Lessons. He's so close to swimming. I think a class is just what he needs to get it. He's not convinced, so I've bribed him with a treasure chest upon completion of the class. Hope it works! We'll also swim at the pool after his class is over, so it will be a fun way to end the class (hopefully). 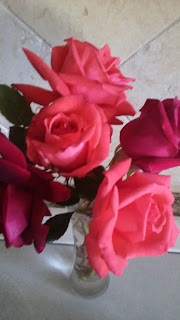 This weekend I was smothered with love all weekend. Saturday Logan and Dave picked me two bouquets of flowers from our garden (one roses and one irises). Logan was so proud and we have smelled the flowers every day. 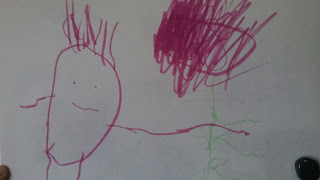 Dustin drew me a picture of me holding a rose. "See the thorns? You are being so careful not to get poked. And see your hair? You just jumped on the trampoline so it's sticking up." I LOVE it! I didn't know he could draw this detailed (he usually just scribbles). 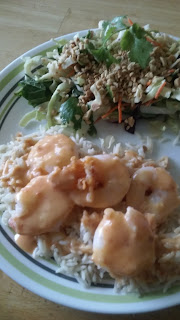 For dinner I used a $50 off coupon code and ordered a box from Gobble. It's a meal subscription where you select two weeks in advance what you want, they send you the ingredients and it takes you 10 minutes to cook. We got three meals for 2 people and it cost us $20. The food was FABULOUS! My favorite we had for Friday night date. It was a mint and pea ravioli with a creamy sauce and pea sprouts. I will try to re-create it because man it was so good! For Mother's Day Dave made us Thai Chili shrimp with coconut rice and a salad with Thai spices and vinaigrette. It was also fabulous. Would I do it again? Probably for Mother's Day next year and maybe for our anniversary or something fancy if we don't have time for a real date. Cooking was super easy and clean up was one, maybe two dishes per meal. Perfect for a special occasion at home.

After dinner was rough. I think it's hard to know a whole day is for someone else and be good all day long. But we survived.

With summer coming in two weeks it has me thinking of what I can do to make things go smoother. We're going to have to make a schedule and some activities (maybe library, park, pool and play dates). We'll see what I can come up with. I also want to do some home schooling over the summer so Logan doesn't forget everything he's learned. We'll see.
Posted by Amy at 12:51 PM No comments:

Easter was great! We had a busy day full of Egg Hunts and Church. We did our Easter FHE the week before, so we could have conversations every day about what happened the week leading up to the Resurrection. I think some of it got through to them because as I was washing dishes Monday morning I overheard this conversation from the other room (while playing with their Easter scene):

Dustin: they shot Jesus with arrows
Logan: no, they stabbed him with spearsDustin: and he died in a tombLogan: and 3 days later he was resurrected!Dustin: no he wasn't!L0gan: yes he was! (repeat)Me: he was resurrected and walked with the apostles and ate fish and honeyBoys: GROSS!

For Easter Sunday we had the best ham I've ever cooked! It was also the cheapest ham too ($1 a lb), so maybe the secret to a good ham is to spend less. We also had fresh green beans, garlic mashed potatoes and rolls. And blackberry pie for dessert! 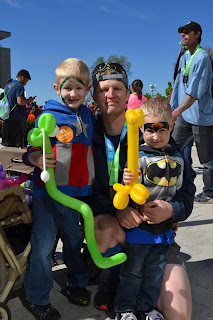 I swear time has flown by lately! Dave ran a half marathon a few weeks ago. His time was 2 hours 10 minutes. Which was pretty decent considering he had an injury and had taken three weeks off training about a month prior to running. He hopes to do better in his next race. 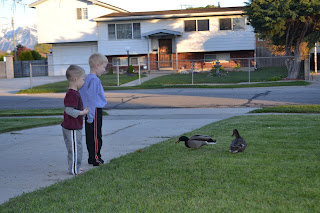 We have some ducks living on our street! It's been raining like crazy this year, so they love to bathe in the gutter in front of our house where water backs up. Sometimes they even sleep in our front yard. The boys love them and run outside whenever they see them out the window. Which can be problematic since they don't always ask first. 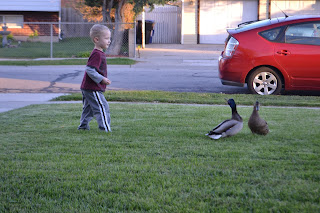 One morning I was washing dishes and see Dustin run across the front yard, chasing the ducks. We have had talks about not going in the front yard without permission and not to chase the poor ducks.

Last week we had a park play date with the Tappanna girls (the same ages as our boys). It was only raining a little, and the play structure is mostly covered. We lasted an hour before getting too cold and needing to go home. It's been so hard for these boys to get their energy out around the house! And Dave's been working really late lately (he did 20 hours of over time last week and expects to have to do more next week to meet his deadlines). He's better at wearing the boys out than I am, so his love and attention has really been missed.

Monday night we had a fun FHE on our family tree. Logan had been asking a lot of questions about Grandma's Grandma or Papa's Papa so we thought we would talk about our relatives. I drew a big tree with our family names and some of our ancestors. Then the boys pointed to a name and we told a story about each.

I called my Mom and Grandma to ask for ideas of stories to share so I ended up learning a few things too. My mom remembers going to her grandma's house (Katherine Bloom) and they had ice cream for dessert. The next morning Grandma Bloom told them she needed them to eat all the ice cream for breakfast so it didn't go bad. They thought it was the coolest breakfast ever! Grandma Yoder also said she remembers every Sunday her parents (John Steinhauer and Katherine Bloom) would take them either on a walk or they would go on a scenic drive. Sometimes they would even go on a day trip to somewhere fun too. John loved to grow things and always had a beautiful garden. Katherine sewed all her kids clothes and quilted too. Dave's parents came by for the lesson and shared their stories about their ancestors too. I forgot to write down who did what, so I'll have to ask for the names of who loved to make pies for our records. We also looked at pictures of some of the relatives that died before we were born.

After weeks and weeks of rain (which Utah did need), we've had such a beautiful, sunny week! We met our friends the Fullmers, Mataeles, Bowers, Fairbrothers, and Talakais at the the park on Wednesday. We all needed some play time and it was so much fun to get out of the house with friends! I started a Taylorsville play group on Face Book so whenever anyone is planning a park trip and wants company, we post. Then the kids have friends to play with and the moms can sit and relax a little. It's a nice break for us all.

Wednesday night Grandma Sheila and Papa Mike also came to spend the night and be in town for my brother Dan's college graduation. It's been great to see them! Yesterday they spent all day with Dan seeing his graduation, helping him buy a car, and going out to lunch and dinner. Today we'll see them in the afternoon and they'll leave tonight.

Dave and I also went on a work sponsored date this week. They paid for movie tickets, popcorn and drinks. The movie was ok (Guardians of the Galaxy 2). I'm glad we didn't pay for it, but it was nice to get out. Maybe Dave enjoyed it more (he's far more into the super hero stuff than I am.
Posted by Amy at 11:28 AM No comments: