It's been a rough week at the Plastow house! It started with Logan teething, which lead to diarrhea, which lead to diaper rash. Add in an ear infection, top that with 6 month shots, and sprinkle in a cold for Amy and Dave. Oh and did I mention the lack of sleep?

Logan was in so much pain from at least one of the above symptoms that he stopped napping during the day, and wouldn't go to sleep until at least 11 at night (some nights were 1:30). He would wake up several times in the night crying until I let him fall asleep whimpering on my chest and quietly moved him back to his bed. We went to the doctor  and they said he would be fine (good to hear, but still... give me some magic cure all).

But I think the worst is over! Because of a strict diet of bananas 3 times a day the diarrhea is gone, and along with it the diaper rash. The ear infection cleared itself up (took about a week), and he was back on his scheduled napping and sleeping through the night last night. We're still dealing with teething, but we can handle one problem.

So the baby is on his way back to being his happy self, and the parents are back on their way to being awake during daytime hours! Which is good considering how busy we are...
Posted by Amy at 10:16 AM 3 comments:

The past month has been so crazy! I completely blame it on the quilting class I'm taking with my mom. Our assignment for the month has consumed all my time, and I'm not even done yet. Dave and I have both been cursing this dumb square. It's going to look great when it's done, but I can't even start to guess how many hours I've spent sewing this thing together! I have so many projects that I've just been itching to start once Christmas is over, and I haven't even had time to start them. Maybe next month.

Another project I've taken on is a baby shower for my Sister-in-law, Angela. Now everyone that knows me knows the only kind of shower I enjoy is the one I take in the bathroom. I begged to not have to have a bridal shower, but I do see the necessity of a baby shower. So when Angela mentioned she only had 2 months left and still nobody had put one together for her I offered to do so. Her mom offered to bring a dessert, so I'll just have to come up with a few more desserts and call it good. I bought some plates, cups and napkins that are cute and girl-y, and have purchased a baby shower gift.

Almost two weeks ago Logan graduated to cloth diapers! Translation: we ran out of all the baby shower diapers we were given so we finally have the opportunity to use them. It's gone well so far. I made the executive decision to use disposable diapers at night time. He was wetting through the cloth ones about half the time, so I figured it wasn't worth the hassle of wet pj's. Other than that I'm loving them. Mostly because I insisted on buying a diaper sprayer so I don't have to mess with the poopy ones, but whatever it takes!

Other than that Dave and I made some time to squeeze in a new bread stick recipe that we've loved! I got it from King Arthur Flour's blog, and they're great (I just had to add more water, maybe the altitude). They're called Grissini and they're kinda a crunchy bread stick. We liked them so much that we ate 6 right out of the oven (even though they're meant for Sunday's dinner): 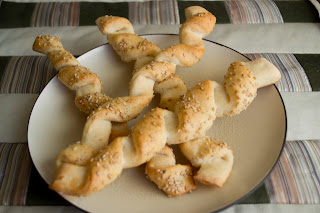 Mix and knead the dough ingredients—by hand, mixer, or bread machine set on the dough cycle—to make a soft, supple dough. Divide the dough in half, cover with lightly greased plastic wrap, and let it rest and relax for 15 minutes (or for up to an hour or so; work it into your schedule as you see fit).

Use a pizza wheel or sharp knife to cut the dough (the short way) into strips about 3/8" wide. Twist the ends of each strip in opposite directions (as though you were wringing out a washcloth) to make a "twist," and place them on lightly greased or parchment-lined baking sheets.

Cover the breadsticks and let them rest and rise for 30 to 60 minutes, till they’ve puffed noticeably. Towards the end of the rising time, preheat the oven to 425°F.   Bake the breadsticks for 12 to 14 minutes, or until they're golden brown. Remove them form the oven, and cool on a rack.  Yield: about 3 dozen breadsticks.


*** Side Note, these were FABULOUS the first day! Nice and crunchy, but when I brought them to Sunday dinner a day and a half later they had lost their crispiness. I don't know why... but make sure you eat a few the first day
Posted by Amy at 11:09 AM 2 comments: