The Week of Cuddles

It's been a snugly week in the Plastow home. Logan's been recovering, but has wanted extra love and attention. So we snuggle and play most of the day. This morning he woke up some time before six, and we ended up falling back asleep cuddling (which is Dave's dream come true).

We've also been playing a lot of hide and seek lately. Dave will run and hide, then peep until Logan and I find him. Then I take a turn hiding until we run out of hiding spots (once you've hid in on spot he remembers and check it). Logan thinks it's great fun, and he'll wants to get in our hiding spot when we find him.

In other news last week Wednesday my brother Dan got home from his mission. Logan and I were able to meet him at the airport and Dan briefly visited our home after. It was great, because Logan hadn't gotten to meet him yet and they were able to spend some time together. Dan would talk or gesture in Tagalog, and Logan would respond. He had to show his Uncle all his toys and book and his fish before he could leave. It was fun to watch them interact.

We spent Thanksgiving at the Plastows and had fun eating and visiting. Dave's old roommate Ramsey and his wife stopped by too. It was fun to catch up with them as well.

I feel ready for Christmas, even though it's still November! I wrapped the presents on Monday. Logan helped by unwrapping the first 4 I wrapped when I went to get more tape. He was having the time of his life playing with all his toys early! At least I know he'll like them. So now all the gifts are high up on the bookshelves in the living room so not to tempt him.
Posted by Amy at 12:54 PM 3 comments:

Someone loves standing on the boxes of food storage hidden behind our couch. He'll watch the cars drive by, but he's enthralled by watching the snow come down in the back yard. As you can tell from the pics, he also got into my felt scraps and likes lining them up on the window sill. He's very precise about it. 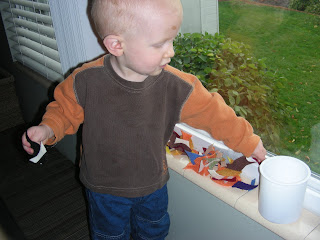 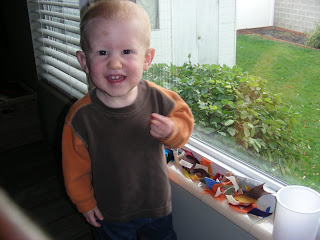 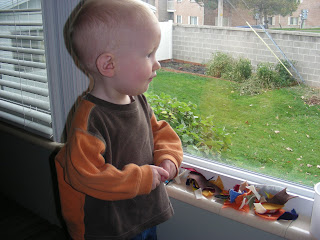 The holiday rush has really hit us! I can't believe it's already half way through November. Thanksgiving is next week. Oh man we're in trouble! I had so many projects I wanted to get done before now... But they just haven't happened.

Last week flew by! We had something scheduled almost every day of the week. The most exciting was Friday, when we closed on our refinance! We were able to get our interest rate locked in at 3.5%, which will save us a few hundred a month. I did the math (of course) and in 6 months we would have saved enough to pay for our closing costs. After that, it's all savings! So we're happy to have that done.

Monday for FHE we went night sledding! It snowed over the weekend, and it was so busy we didn't get to enjoy it until Monday. We knew we had to get it in before today because it's supposed to get up to 50 today. So as soon as Dave got home we scarfed down dinner and headed to the golf course down the street from us.

I think sledding is the one thing Dave's looked forward to  most about having kids. When we moved into our house there were a few items left from the previous owner, one of which was a sled. It's the only thing we didn't throw away. It's big enough for the three of us, so it's perfect for now!

Dave stuck Logan in the sled and we started walking over to the little hill they have. The snow was fresh packing snow, and there weren't any foot prints in it. Half way to the hill the sled hit one of Dave's foot prints, dumping Logan over and white washing him. It took Logan a little time to get warmed up to sledding, but I think he liked it by the end. Now that he has snow boots, we know we'll be going again.

Yesterday Logan had his 15 month checkup. He's in the 45 percentile for height and the 3rd for weight. We knew he was skinny! He has a larger vocabulary than average for his age, and the doctor agreed he's too cute. He also got his flu shot, and although we're glad that's done, it was awful!

Today we're just doing laundry, tidying up the house, and maybe going grocery shopping. Just trying to get ready for Thanksgiving next week!
Posted by Amy at 10:14 AM No comments:

I swear we just keep getting busier and busier. We went to the temple on Friday. It was a horrible day, and everything seemed to go wrong for us going, but we made it and had a great time. Doesn't it always seem like when you really need to go, Satan will do all he can to get you not to? On Sunday we found out our temple will be closed for a month, so I'm glad we got the trip in before then. Yes, we can go somewhere else, but it's a lot easier to go to our temple. 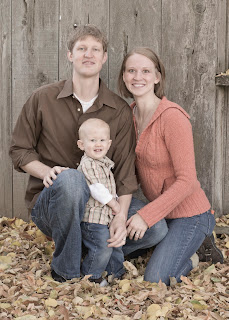 Saturday morning we decided to take family pictures in the back yard. It was an ordeal to get us all dressed and ready! Logan was having a cranky morning, so we ended up only getting one picture with him smiling. Dave looks good and I look ok (there were other ones that I look so much better in), but I didn't want to pick the picture with a sad boy. The timer worked fine, but I'm thinking we need to get a remote before the next time we attempt to take pictures.

Yesterday, after running all our errands in the morning, Logan and I watched Brier for 5 hours. It was such a long afternoon! Brier was having a bad day. Thankfully, whein I put Logan down for his 2.5 hour nap and she was fine for that time. Then he woke up and I put her down for a nap. Finally Grandpa came to pick her up. I didn't get half of the things on my list done, but we survived!

When Dave got home we enjoyed a casual FHE of jumping on the bed. This has been our activity for the past few weeks, because Logan just loves it so much. He just loves to jump! We also ate some ice cream and listened to a conference talk. It was a good end to a rough day!
Posted by Amy at 8:52 AM 1 comment: 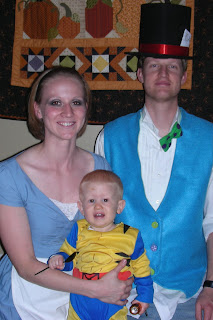 Late Monday night Dave asked me "So, what are we being for Halloween?" Huh? I used to dress up before we got married, but Dave told me our first Halloween together it was kinda silly. So I haven't thought about dressing up since then. Funny how things change when you have kids :).

We talked briefly about easy options, and decided on me being Alice in Wonderland (because I already had the costume) and he being the Mad Hatter. So Tuesday I worked like CRAZY to make something work. I also had to make some cookies for Dave's work party, and I figured while we had the oven on to make a batch of granola. Oh, and I did visiting teachings somewhere in there.

Wednesday morning I ran over to Johanns to pick up some black felt to finish the top hat. And Dave requested some fake teeth. So we ended up spending $1 on felt and $9 on fake teeth for all three of our costumes (not that Dave even wore the teeth...). I finished the top hat at noon and decided it was time for a well deserved nap! 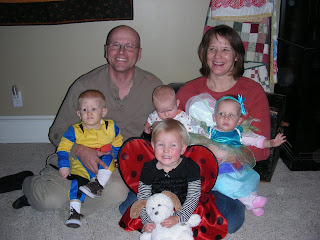 When Dave got home we went over to Grandpa Mike and Grandma Sheila's house for a little party. We ate pizza, decorated cookies, and went trick or treating. Logan loved pouring the sprinkles onto his cookie, almost as much as he loved eating the cookies. 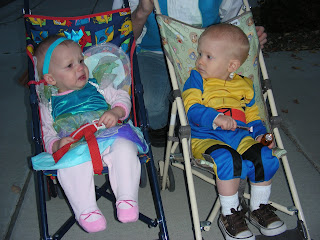 We didn't last long trick or treating, we only did about half a block before the little ones called it a night. Logan weighed in with 2 lbs of candy, so we still did well! 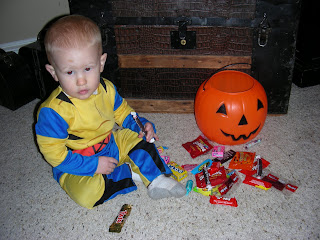 We went back to the grandparents and enjoyed the spoils of our labor. But someone was pretty exhausted, so we headed home soon after. 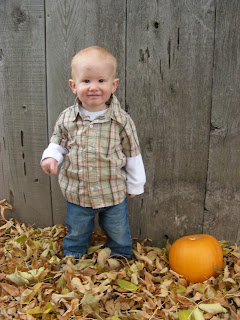 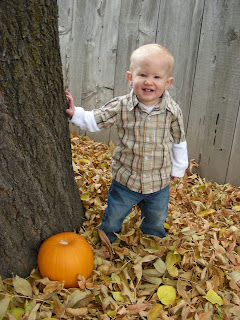 The weather was so nice today we thought we'd do a fall photo shoot in the back yard. I got a few cute ones of Logan dressed up. 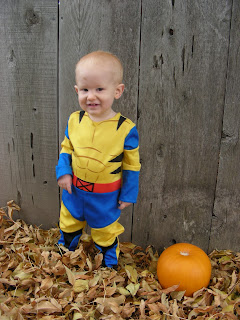 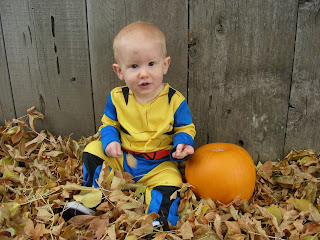 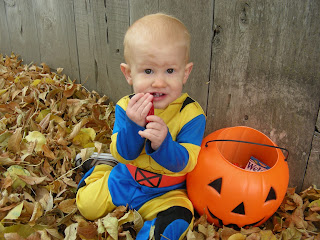 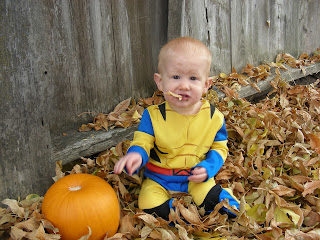 Logan discovered how cool the camera is lately. If I leave it anywhere in his reach I will find a dozen pictures like this. You can see the spider on his shirt on the left (with green button eyes). 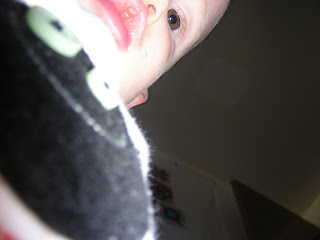