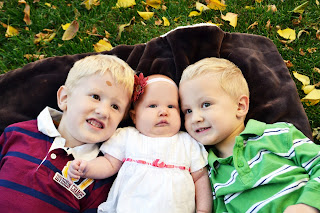 The weekend of Brooklyn's baby blessing my sister Sheila took a large group picture of our whole family and group shots of each immediate family. She sent out the pics this week, and I decided we needed pictures of our kids together and individual shots of our three to update frames around the house. Since Brooklyn is growing like a weed, I figured we had to get these pictures before she got too big for her outfit in the original picture. I love how they all turned out. 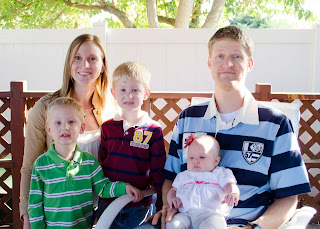 I tried taking pictures of Brooklyn on 4 different occasions and ended up with about 90 not smiling pictures. But this one turned out pretty cute, so we're going with it! 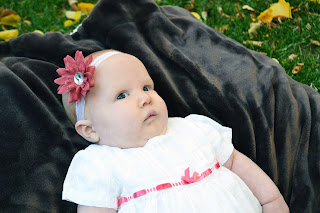 Dustin's in that awkward fake smile phase (where his cheese smile is nothing like his real one), but this one turned out pretty good. 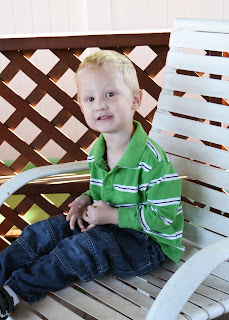 And Logan didn't want to wear this shirt anymore. He wanted the black striped shirt in the picture below. But Mom insisted on the original shirt to match the first shoot. 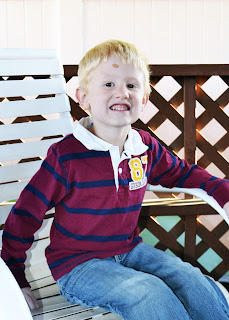 These boys are best friends most of the time! They're either playing great or fighting. 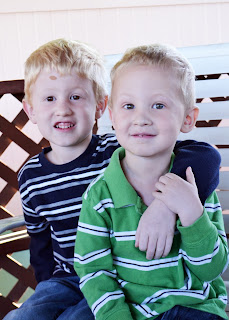 I love this one too! These boys just love their sister so much! What great kids we have! 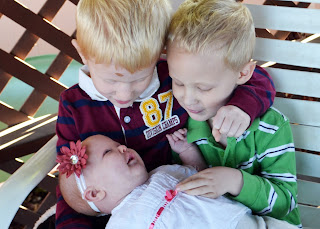 Group shot. Everyone is actually looking at the camera. 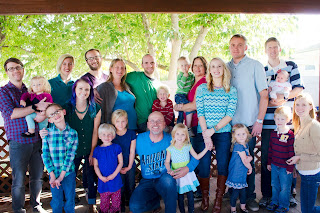 This weekend we headed down for a long weekend in Hurricane visiting my Grandparents, my Mom, and Aunt Kathryn. It was good to see them again. Grandpa is doing worse than when I saw him two weeks ago, he just seemed so tired. I'm glad we got to stop in again, although our visits had to be short so not to wear him out. 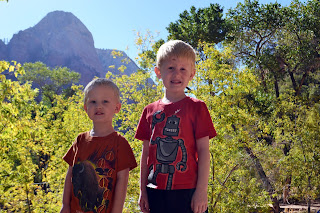 We also hit up Zions while we were in town. We decided to hike the three Emerald Pools. We usually do the first two, but this time we decided it would be good to do all of them (what were we thinking?!?). The boys climbed up every big rock on the side of the trail and insisted on a picture. So we have tons of those shots! 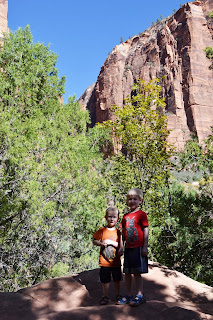 They're little explorers for sure! They did great on the hike up, but were pretty worn out on the way back. Also, Zion was the most crowded I've ever seen it! We had to wait in line for the bus for about an hour. It was insanely busy so we only hiked Saturday instead of returning for another hike Sunday morning. 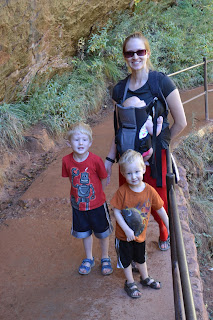 The boys were very impressed with the little trickle of waterfall and the rainbow it produced. 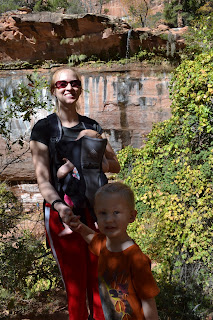 Every time we saw the waterfall, the boys insisted on a picture.  They love cameras. 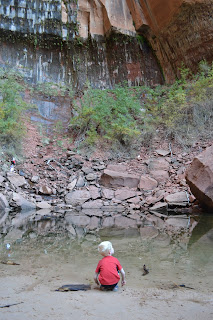 At the last pool Logan had a hay day drawing in the sand with sticks and being tempted to swim in the pool. He kept telling us that this was the most beautiful hike he had ever been on! It was pretty cute. 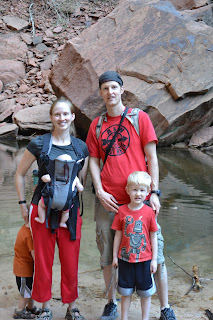 By the last pool Dustin was worn out. He was ready for nap time and refused to pose for pictures. So we did the best we could at a family shot.

After the hike we headed to Hurricane to hit up the splash pad. The boys wore themselves out some more and Dave and I visited with my Mom and ordered pizza. They have this brick oven on the side of the road in town you can get a pizza from. It's fabulous! We ate way too much pizza.

We stopped in at my Grandparents again and my Uncle Mark, Aunt Melissa and their 3 kids were also there. We visited briefly, but didn't want to overwhelm Grandpa so we headed back to our hotel and finished the night with a movie.

We also hit up the pool at our hotel 3 out of 3 days we were there. The boys loved it! They are looking forward to swimming at our hotel pool again when we go to Moab to visit Dave's extended family. Dave and I were completely worn out by this trip, but the boys said it was the best vacation ever. So I guess we did something right.
Posted by Amy at 3:54 PM No comments:

This weekend was Brooklyn's baby blessing! She was so cute in her dress. I of course had to do a few photo shoots to make sure we got a good shot. She's so sleepy I think we did 4 photo shoots in all. 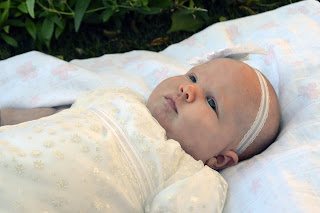 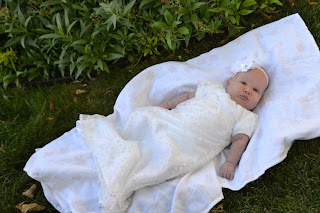 I made the dress for her a month before she was born, and followed a 0 - 3 months pattern. But a week ago I tried the dress on her and she had gained too much weight to fit into it! It fit over her head, but her belly was way too big. So I had to cut a 5 inch slit down the back, line it and add a button closure. It worked out, but one more week and even that wouldn't have been enough. 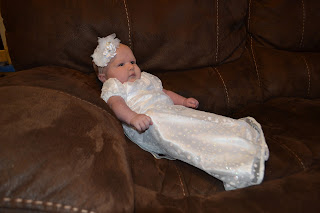 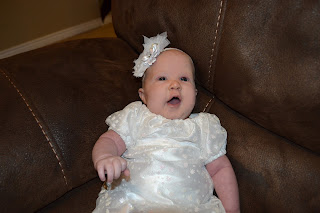 By the time I was done I had about 200 photos to go through and pick from. So these are the best of the bunch. 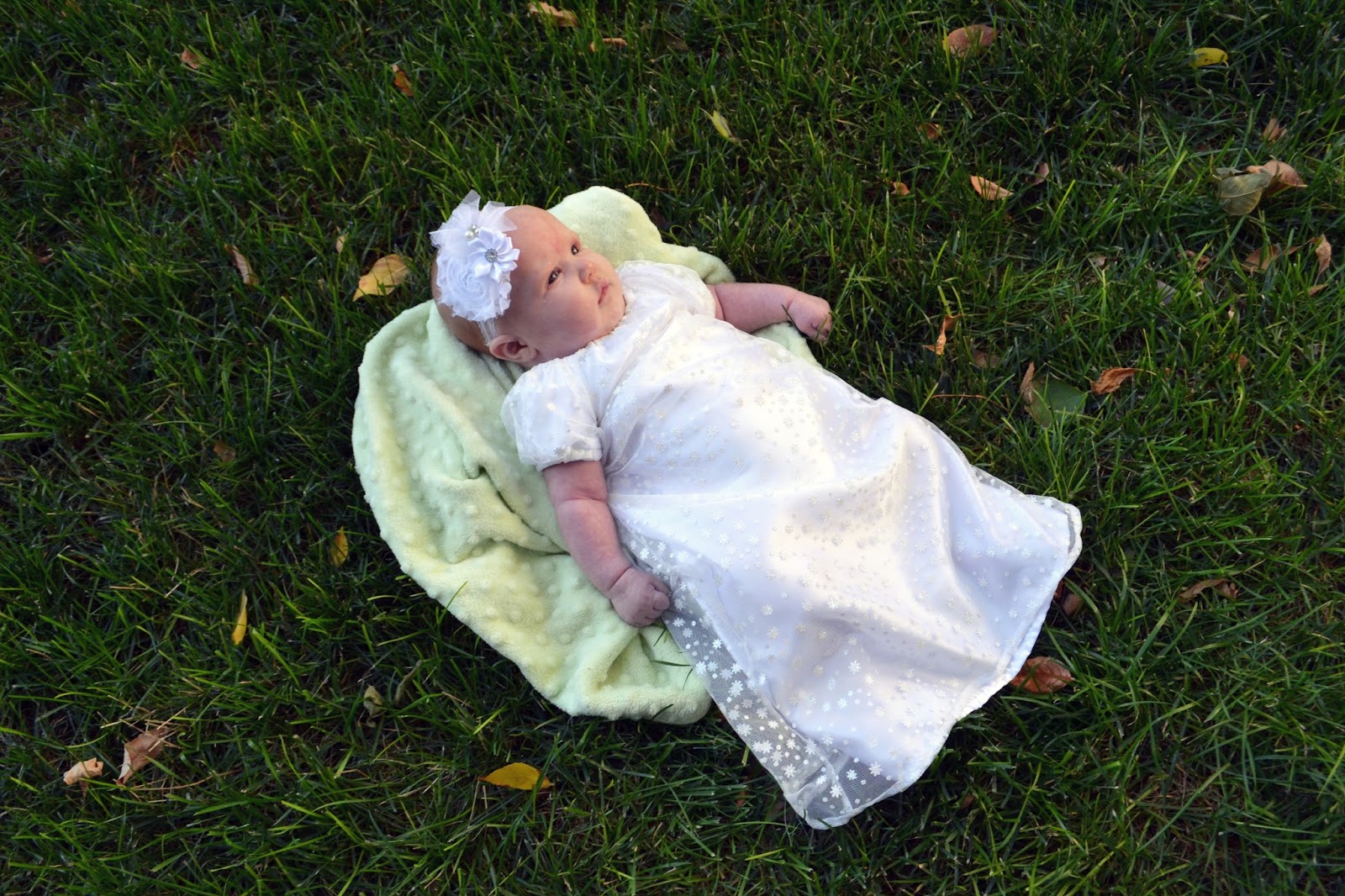 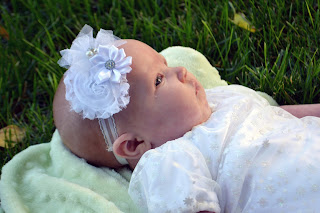 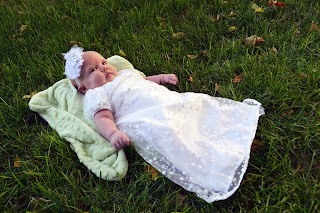 The blessing went well. We had a lot of the family come and get to hear the blessing. It talked a lot about her being faithful and a positive influence on her friends. It's funny, with the boys I don't think their blessings talked about friends, but girls are so influenced by their friends. 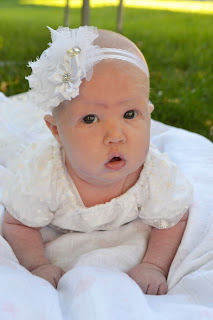 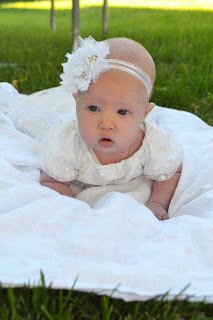 Saturday, since my parents were in town anyway, they threw a family dinner on our gazebo. It was nice to get to see everyone and visit. The kids had tons of fun playing with the balloons the Grandparents bought (for Rea's birthday), and messing around with each other. They spent most of the time on the trampoline. 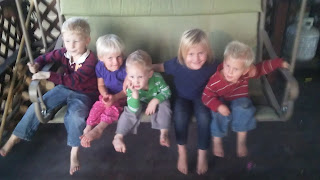 I can't believe how big they all have gotten! They all look like big kids now. It's pretty fun to see them all interact. 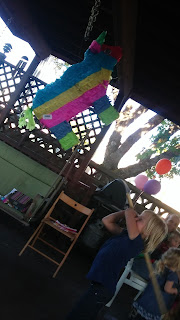 Since it was Rea's birthday she decided she wanted to get a pinata. So the kids all took turns hitting it. It was pretty tough to break open, but they finally did it and enjoyed the candy inside! 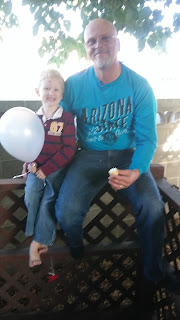 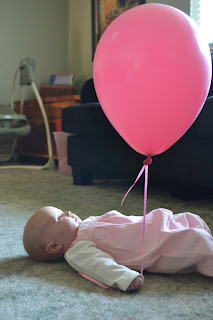 Even Brooklyn enjoyed her balloon. I put it in her hand and when she moved it would move, which made her excited and she would kick, causing more reaction! She also had fun talking to it.

She's recently started talking and smiling in response to people. She won't always do it, but sometimes she will talk back to us.


Sunday after the blessing my Mom, Dustin, Brooklyn and I headed down to Hurricane to visit my Grandparents Yoder. My Grandpa recently found out he has cancer and doesn't have long to live. So my Mom offered to drive me down for a visit, since she was going anyway. I didn't think I could get in a good visit with 3 kids, so I left Logan with Dave. He had school Monday, so after school he went to a friend's house.

The visit was good. It's hard to see my Grandpa who is usually so driven, to be feeling poorly, but I'm glad I got to sit with him. I asked him a question he used to always ask me when I would visit him during my college years: What one scripture proves the church is true? Back when he would ask me I would give my answer and he would always reply no, and tell me what scripture he picked that time. The answer always changed, so even if I remembered the verse he said last time it was always different.

This time he had two verses for me. First he said "Be ye therefore perfect, even as your Father which is in heaven is perfect." (Matthew 5:48) But he followed it up quickly by telling me to always stay true to the gospel of Christ. That "What we know is a drop, what we don't know is an ocean" (Isaac Newton). He told me to always love my children. Even if they fall away from what I have taught them, love them. Pray for them and they will eventually come back to what they know is right.

Since my Mom was asked to give his eulogy, she asked what he wanted shared. He divided the topic up into 1. His service in the Church 2. The Coastguard and 3. His work career. It was interesting to hear about all his callings in the church as well as how he met my Grandma. He has accomplished so much in his life, and it was great to hear all that too. 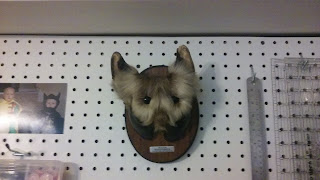 Grandpa also presented me with his Hoofibou. It's something he picked up in Alaska. When Dave and I were first married Grandpa told Dave that it was his pet dog that he had mounted after it died when he was a young boy. For years Dave believed Grandpa's dog was hanging in Grandpa's Ronald Reagan bathroom. So now it hangs prominently in my sewing room to remind me of Grandpa.

It was a long trip going down and back in 24 hours, but I'm so glad I got to visit with him and Grandma. We have a family trip planned to head down in a few weeks, and I hope to be able to see him again then.
Posted by Amy at 4:36 PM No comments:

I finished switching out warm for cold clothes for the boys this week (it only took an entire week to accomplish). We also got out Halloween decorations which took ALL week too. I wasn't really planning to decorate this year, but one of the ladies at church asked to borrow my wooden candy corn, and the boys discovered the box of decorations before I put it away. So we are all festive!

This weekend we really enjoyed General Conference! We went a little overboard on the snacks (but can you really have too many Conference snacks?). The boys and I made GF pumpkin chocolate chip muffins, GF zucchini bread, hummus and sriracha hummus. To go with the hummus we had pita chips, GF pita chips, red bell peppers, broccoli, and carrots. We also had a cheese platter, pineapple, grapes, blueberries, strawberries, trail mix, dried apricots, M&M's, cinnamon almonds, gummy vampire teeth, candy corn, licorice, sour gummies & gummy bears. Needless to say we were well fed physically and spiritually.

Saturday first session was rough. We had to threaten within inches of lives to keep little boys from killing each other. Although both boys did recognize President Eyring and Uchdorf. Dustin exclaimed "It's the guy from that picture!" Second session went better. Dustin and Brooklyn were down for naps, so I'm sure that had something to do with it. Logan built quietly with Legos the whole time. Every once in a while he would stop building and ask questions or make a comment. My favorites were

Logan: Love your enemy?!?
Me: Yes, that means we need to be nice even to people that are mean to us
Logan: That doesn't seem fair

And during the third song of the session Logan sighed and exclaimed "I wish this music had some hardcore guitar!"

Brooklyn has gained so much weight that she didn't fit into her baby blessing dress (size 0-3 months). Good thing I tried it on a week before her blessing! So I had to figure out how to alter it to fit her. I cut a 4.5 inch slit down the back, finished it off and added a button closure. So hopefully she won't gain even MORE weight in the next 5 days or I'll have to go buy something for her to wear! I'm hoping to get in a photo shoot tomorrow so we can have some cute pictures before the blessing. I'm afraid if I wait till after it won't fit any more!
Posted by Amy at 5:46 PM No comments: