I swear, Christmas is the busiest time of year! It's always packed with stuff to do, but it's also tons of fun. This year was no different. We celebrate Christmas with each of our sides on a day other than Christmas so we can really focus on who we're with and not have to rush. It's so nice to have a day to spend with my family, one with Dave's and Christmas day with our little family.

The Saturday before Christmas we celebrated with Dave's side. It was at Dave's brother Jon & his wife Anisa's house and everyone but Lucinda & Aaron were able to join us. Jon & Anisa just moved into their first home a few weeks ago, so it was nice to see it! It's a cute! We ate soups for dinner and enjoyed cookies, presents, and chatting afterwards.

Logan enjoyed playing with his cousins McKay and Lindsay. Lindsay lives in our basement, so we see her all the time and they just love each other! McKay was super excited to see Logan and exchange gifts. This year I had Logan give each of his cousins a little gift so he can learn to give. It was especially hard, because he really wanted most of the toys, but a good lesson to learn.

The next day (Sunday) we headed over to my parents for a Chinese food Christmas Dinner.  Sheila and Scott were missing from the dinner, but everyone else was there. It's some what of a tradition in our family to do Egg Rolls, so we filled and fried! The food was great (as always).

Logan had so much fun playing with his cousin Andrea, and we had fun chatting and playing games. It was a great time! Logan again had a hard time giving away his gift to Andrea, but there were so many toys to play with that it ended up ok.

Christmas Day we had fun just as a family. We opened presents, played with all the new toys Logan got, and just relaxed. It was so nice to have a little break from the hustle and bustle of the season.

Dave took the entire week and a half between Christmas and New Years off, so we were able to do a lot of relaxing. We all came down with a cold somewhere in there, but since we had so much time off, it worked out well.

Dave also started working on his new hobby of wood working during this time. He's building Logan a play table for his new train set/legos/cars or whatever. So far he has the legs put onto the base. Logan's loved putting a blanket over it and making a "fort" out of it to hide in. I'm sure he'll love it even more when it's done.

I took it easy a lot of the time off. I read a few books and have been catching up on some unfinished sewing projects. It's been nice to have extra time since Dave's been home to help out. I also tried a few gluten free recipes, since I've gone gluten free on the 1st of January. 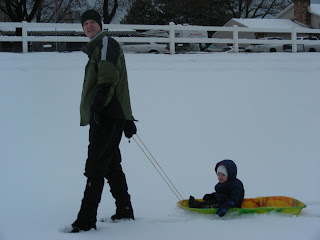 It snowed last week, and of course we had to go sledding! We headed over to the golf course after nap time and got some intense sledding in. Well, as intense as a 8 foot hill can be. But it's the perfect size for Logan. 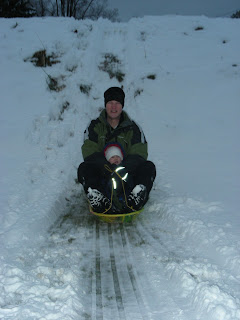 We went down a few times all together, and I took Logan down a few times, but he really just wanted to go with Dave. We sledded for about an hour before our fingers turned into popsicles. When it was time to go home, Logan was so upset we couldn't stay longer. 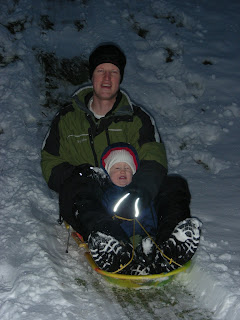 It's been a busy week around here! Last Saturday I went to my monthly quilting class, and Dave and Logan went to Dave's Parents to help do some sheet rocking and mudding. Dave was there most of the day, but they got most of the work done.

I found out last week I have a mild aversion to Gluten (wheat products). It's not considered on the same level as Celiac Disease, but a gluten free (GF) diet is still recommended at least for 2 - 3 months. I've done some research and decided.

I'm going to wait until January 1 before I make any changes to my diet. The Dr said it won't kill me to wait, and this way I can get in my fix of pies, cakes, cookies, pizza, doughnuts, breads, and licorice before I start. Then I have a few months to find good substitutes.

Sometimes after at least 2 - 3 months of GF living, a mildly gluten averse person like myself can re-introduce gluten into their diet. How do you know? You try some and if you get violently ill you can't bring it back. After doing some research I decided that although 2 months is the bare minimum, I think I'll wait at least 4 months before I re-introduce gluten.

Also, because I'm only mildly averse toward gluten, I'm not cutting out the questionable products. Like oats, and products that say on the back "may contain trace forms of gluten" because they were made in a factory that also makes wheat products. This will make life substantially easier.

That being said, I've been thinking a lot about food lately, and created this fabulous recipe. I got the orange sauce from a Better Homes and Gardens recipe, and the idea for a nut encrusted salmon from Red Rock (a restaurant/brewery in downtown Salt Lake City).

This recipe is heavenly! I love the sweet of the maple and the zing of the orange. It's totally worth buying the pure maple syrup for. It makes a difference. 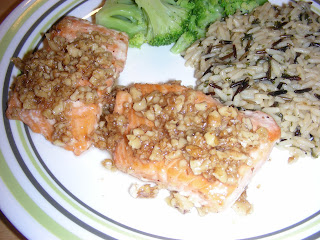 Trim your salmon so it is ½ inch thin (some cuts of meat come naturally this thin, others you need to lay on it’s side and slice it so it’s thin). Dry off the meat if any juices are on it. Lightly dust with flour, salt and pepper.

Put the oil in a pan and start heating up. Place 3 T syrup in a dish and put the crushed pecans in a second dish. Dip the salmon in the maple syrup, then press meat in the pecans. Mix any remaining syrup with the walnuts and place on top of the salmon. Cook the meat 3 – 4 minutes per side.

To serve: pour the orange sauce over the salmon. Rice is a great side with this!
Posted by Amy at 1:08 PM No comments: 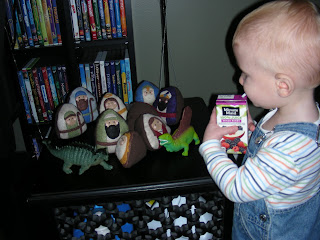 It's been busy season around the Plastow home! We got most of our Christmas decorations up, and Logan has been enjoying them. It's been hard to find places to put all our fragile nativities, since he's so fascinated by the "new toys". I'm just glad he has one nativity he can play with.

He loves to move his beanbag nativity around the living room. See the one dinosaur "talking to" Jesus? I guess the dinosaur was paying his respect, who knew? 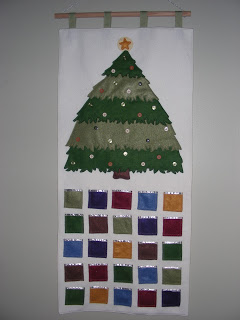 I've also been working on this bad boy! I got some of the felt from my Grandma Yoder, and the rest I bought last year. So I've been working like mad on finishing the ornaments! One a day until Christmas... 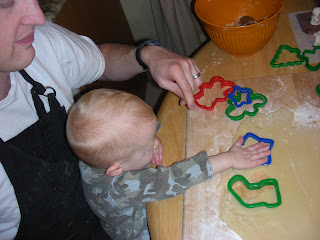 Monday night for FHE we made sugar cookies. I rolled out the dough, and Logan & Dave cut out the shapes. The cookies turned out with a few finger prints in them, and double stamping here and there, but they still taste good! 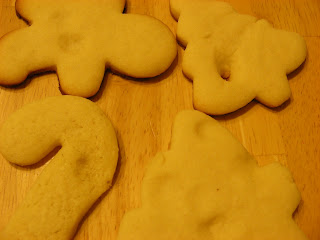 Tuesday morning I came out from my shower to find this! I guess I had left the flour bin unscrewed from cookie making the night before, and Logan had used the scoop to make piles of flour on the floor, on the sugar bin, and all over his feet! Little punk. It took forever to clean up. 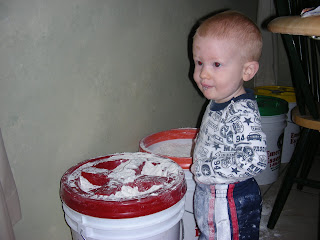 Wednesday we had a few of the cousins and Grandma Sheila over to decorate our cookies. If this leads you to believe we didn't decorate and eat any before Wednesday, it's not true! We ate (and shared with neighbors) our fair share.

The kids had fun creating, although I think more of the sprinkles were consumed before they even hit the cookies. The ladies had fun too eating cookies and chatting. It's been a while, so it was nice to catch up.
Posted by Amy at 12:52 PM No comments: