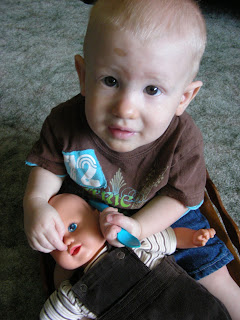 Well, we survived the week of no Dad! We went to the park every day last week, went to DI to find $5 worth of "new" toys and even discovered a splash pad by Walmart that we had to visit a few times. The baby you see here was one of our DI purchases, as was a breakfast in bed tray that has become the living room sled. Not that it was the plan when I bought it, but I'm having a hard time telling Logan (and Dave) that it's not used to slide Logan around the Living Room. 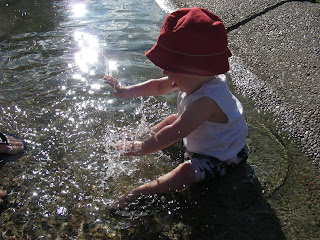 Saturday we brought Dave to the splash pad, and we had the time or our lives! They have a little stream that the bottom is paved with big stones to sit on it it, and Logan LOVES splashing around, crawling and walking through the water. 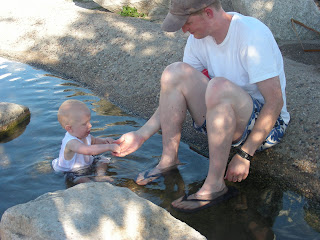 Dave had off Tuesday for the 24th of July (a Utah holiday celebrating the pioneers), so we had most of his family over for a BYOM BBQ. We ate and chatted until 9:30 at night!

The rest of this week has gone by pretty fast. I finished the top of my Autumn quilt and have a hot date to pin it tomorrow with my mom. After that we just have to quilt them (I'm doing my by machine), bind them, and they'll be done and ready for enjoyment this fall! 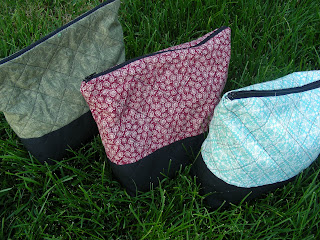 I also finished a few bags to organize Logan's toys. I fell in love with them, and will probably have to make a few for myself, when I have some spare time. What I love, is the internal lining is sewn to the zipper so there isn't an unfinished edge showing. Also I love the square quilting on the outside. It just finishes off the look so nicely. 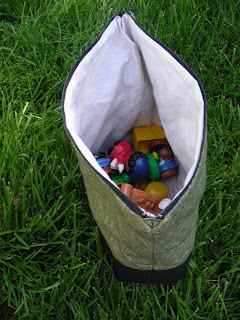 If I sewed two handles on these would also make super cute bags. Although then they'd need a pocket or two inside. Can you see how my projects just spiral out of control? Fortunately these are all made from scrap material that I already had on hand, so it only cost me 3 zippers to complete!
Posted by Amy at 5:34 PM No comments:

I swear this summer has just flown by! Last week went by in a blur because Logan caught a virus from his cousin McKay, and was understandably ornrey. He wouldn't eat, he was fussy, he had a fever, he wanted to nurse constantly, and he had a hard time sleeping. But we survived and he's tougher for it.

We had Caitlin's baby shower this weekend and it went well! I made cupcakes and key lime pies in baby food jars, we had some chips and salsa, and my mom brought some fruit as well. We opened gifts, decorated onesies, and generally had fun.

Saturday was also the first quilting class of the year, and from the colors of the first two squares, it looks like it will be a good year/colors I like. The theme this year is "Quilter's ABC's" and each squares design will start with a different letter of the alphabet. My goal is to finish the first squares today so I can reach my big goal of finishing last year's quilt (a fall design) by the end of August.

Nursery was rough this week! We had two boys that haven't been since we started and they were both wild children. One (only child) would want someone else's toy, and take it. If they fought back he would push them as hard as he could and take the toy. He's bigger than everyone else in there, so this caused many tears. This was also the fullest week yet, with 9 out of 11 kids there. And one of the other leaders just didn't show up, so we were short staffed. Hopefully it gets better as they get more used to us.

Sunday we invited a family from the ward over for dinner. Well, we talked to the husband (Matt) who is Tongan and invited him over. He committed and I asked him to tell make sure his wife knew too. I even called mid week to remind him to make sure she knew. Sunday rolled around and Matt showed up without Vickie! So the three of us (and Logan) ate.

Matt brought us treats for inviting him over. Pastries for Dave, Chocolates for me, and Raisinettes for Logan. I promptly ate the Chocolates, Dave ate the Raisinettes, and we shared the pastries with Logan. So we got to know Matt a little better, even if I don't even know if Vikki knew she was invited.

Dave's work has a big deadline this Friday. Whenever this happens I'm always glad he's still paid hourly instead of salary, because he'll be gone from 7:30 in the morning until at least 8:30 at night all week long. This morning I packed him breakfast, lunch and dinner for the day and I'm hoping to see him some time after Logan is in bed.

When we have weeks like this, I try to take pictures of what we're up to and text them to Dave so he gets a little break, a smile, and feels like he knows what's going on with Logan. On the up side, I've been able to get the top of my quilt done during my free time this week! Now I just have to pin it, quilt it, and bind it.

We had a fun 4th of July LONG weekend! Dave took off Thursday & Friday and the office was closed Wednesday, so we had a 5 day weekend. On the 4th we went over to Dave's parents for a BBQ and we all brought homemade ice cream. We made strawberry with fresh strawberries from our garden. YUM! 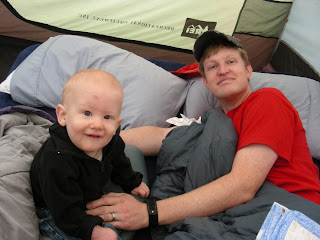 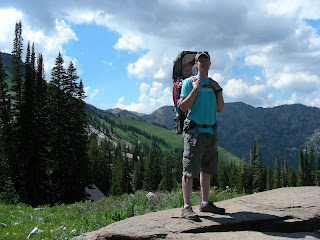 Thursday we were supposed to go camping in American Fork Canyon... but there was a fire and they closed the canyon for about 4 days. So our reservations were canceled! So instead we drove up to the Albion Basin, set up our tent in the pouring rain, and sat in it for 3 hours. Logan was miserable and all our stuff was soaked, so we packed up and went home. We set our tent up on the gazebo to dry out, and tried again on Friday night. 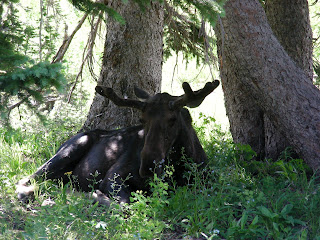 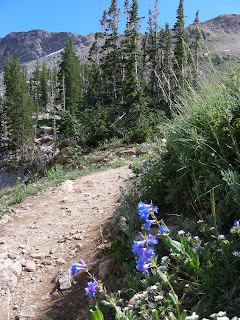 The weather was perfect when we got up there again Friday afternoon! And it was so beautiful up there. There was tons of black dirt for Logan to get filthy crawling through. Everything was lush and green, and the fields were covered with wild flowers. We even saw a moose as we were hiking. 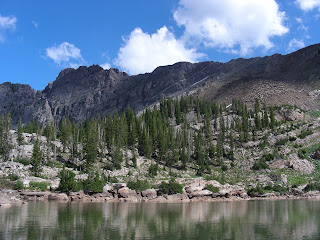 We hiked up to Cecret Lake, ate a snack, and Logan had a blast playing in the water. He was completely soaked by the time we left. He kept splashing and scooting his bum closer and closer to the water until he was sitting in it. The water was freezing, so I don't know how he could stand it! 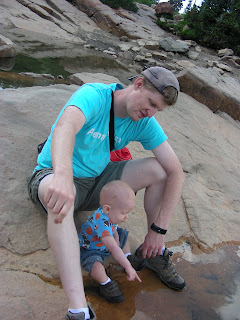 That night we made our dinner, it rained for a half hour, then we built a huge fire and ate smores! Logan didn't love the smores, but Dave and I sure did. We (including Logan) went to sleep around 10. 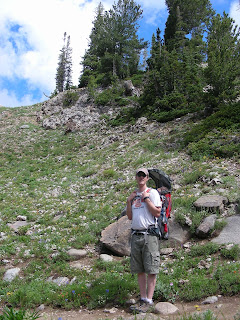 The next day Logan was up again around 5 so we started the day really early. We made a manly breakfast, then packed up and went on another hike. Since Logan refused to nap in the tent either day, he was exhausted and super cranky for this hike. He fell asleep on the way to the lake, but cried almost the whole hike back. 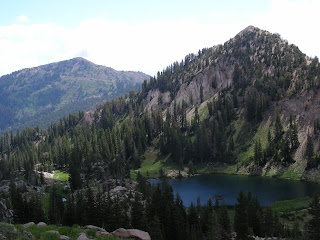 This hike went to Lake Catherine, and it was georgous, even if we didn't hike down to the lake itself (someone was insanely grumpy by this point). It was only a mile and a half hike with a 800 ft elevation gain, so not too bad. 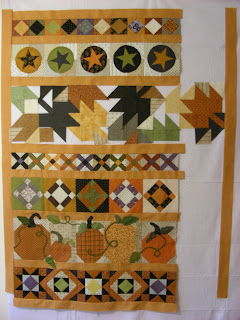 The rest of the weekend was uneventful, except that I'm ALMOST done with my quilting class quilt. I worked like crazy on the top Sunday and Monday. Mom came over Tuesday and we figured out what we were going to do to replace the too cute-sie applique.

We picked a leaf design, I've cut out the pieces, and just need to add some white to the background and I can finish up the top. I'm so excited for it all to be done. It's going to be cute and done hopefully just in time for the fall.
Posted by Amy at 9:42 AM No comments:

Logan said his first real word this week! He has started to say "up" when he wants to be picked up or if he drops something and wants it back. It's so cute! When we make a big deal about it he repeats it again and again. We can't wait for what will come out of his mouth next.

He's also learned to wave and pinch. He only waves when he feels like it, but it's so cute when he does. And his pinches HURT! He pinches my neck and eyelids most. That's what I get for trying to take naps when he's sleeping I guess. 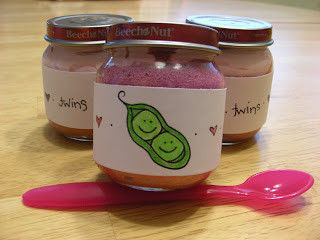 I brought cupcakes in a jar to April's baby shower on Saturday. They turned out pretty cute, and I already have plans to make something similar for my cousin Caitlin's baby shower next weekend. Except I think I'll try out little pies (key lime for sure and maybe a second pie).

Saturday night we heard fireworks around 10:30, so we grabbed a packing blanket, climbed up on the roof, and watched the show. They went on for about an hour, and we had a fun time watching them. Dave's so excited to really get to go see the fireworks on Wednesday night. Angela & Blaine have offered to listen for our sleeping baby so we can go.

Also I wanted to include our favorite curry recipe. It's really easy and we just LOVE it! 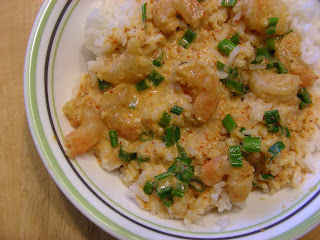 Also if you want to make it a pineapple curry you can make the following adjustments:

Add the above mentioned ingredients when you add the coconut milk.
Posted by Amy at 2:52 PM 2 comments: