Christmas & the rest of December

December went by in a blur! All the sudden it's January. Logan and Dave went back to school and work today. So many things that we wanted to get done didn't get completed, but that's life. So here's a recap of all the fun we had in December. 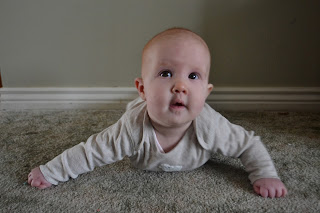 First off Brooklyn is getting so big! She's almost 5 months old and wants to crawl, but just can't get the mecanics down. She lays on her belly and swings her arms back and forth (looks like she's pretending to swim). She's really discovered her voice too! She screeches with joy. It's pretty loud, but cute. On Sunday we got kicked out of Relief Society because she was being too loud. She is happy almost all the time (except if she misses nap or a meal). I can't get a smiling picture of her to save my life, but she's always grinning at us and the boys. She just loves her brothers almost as much as they love her.

We started out December with a visit to Santa. Our mortgage company does an event each Christmas, and this year they had Santa come. We visited with him and got some doughnuts and hot chocolate. It was nice, but the boys were terrified of Santa. Dustin more so than Logan. We were more impressed by the food than the big man, but I'm glad they got the opportunity to see Santa. 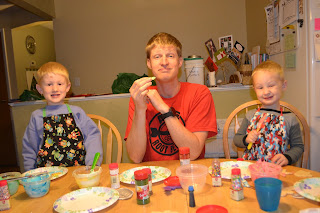 Every year we invite Dave's parents over for cookie decorating! This year Grandma Linda & Papa Bill brought a plethora of sprinkles! We went crazy frosting and decorating. The boys ate their weight in sugar, and we even gave a few plates of cookies away to friends. 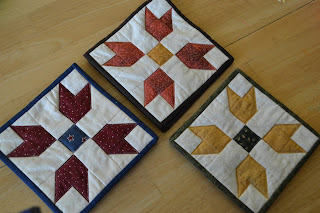 This year was rough in the homemade gift department. What can you expect after having baby #3? So I made a set of hot pads for each of the ladies that serves with me in the Relief Society Presidency. I had great intentions of making more for other friends/family, but it just didn't happen! They either got mini loaves of bread (cinnamon banana, orange cranberry, and pumpkin spice), flavored butter spreads (garlic or cinnamon honey), sugar cookies, or gluten free ginger bread bars. I love baking too, and it went a lot faster than sewing would have. 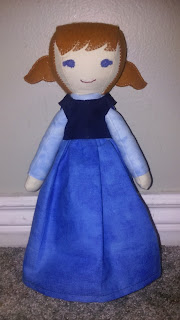 So this little lady still isn't done! I started sewing her for Brooklyn before Christmas, then Dave found out he had 3 days he needed to use before the end of the year or loose. SO my last 3 days that I planned to finish her were sucked into the black hole of construction. I've started embroidering the bodice of her dress and she needs a few buttons, snaps or velcro to close up the back.

We also got to see the lights on Christmas Street (Sugar House)! One Sunday we drove out to see all the beautiful decorations. We see them every year and it's fun to see what has been added. There is also a house in West Valley that has insane amount of lights that flash to a certain radio station's music. The boys loved that house the best of all! We parked in front of the house to listen to the music and we let the boys out of their seats so they could get a better view and DANCE! Yup, car dance party until Brooklyn got grumpy and we drove home for bed time. I think we'll have to add that house to the line up next year too. 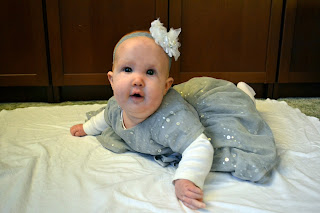 The Tuesday before Christmas Dave was taking the Young Men down to see the lights at Temple Square so we decided to tag along. It was beautiful as always although the boys were VERY disappointed that we couldn't go into the temple. We didn't even stop at the visitor's centers since we were with the Young Men and on a limited timeframe. Dustin couldn't decide if he liked the Christus best or the Angel on top of the temple more. He still wants to be an angel on top of the temple when he grows up, so it has quite the appeal. When we got home we had some hot chocolate before a late bedtime. 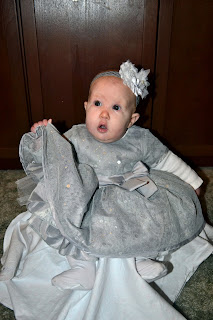 What can I say, we loved Brooklyn's Christmas dress. She was pretty fascinated with the tulle skirt too. 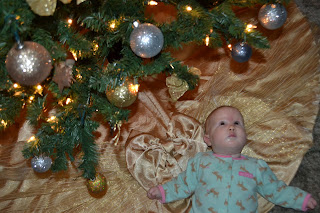 Since I had all the Christmas gifts wrapped in advance, Christmas eve went pretty smooth. We took pictures of Brooklyn under the tree while waiting for the boys to fall asleep. She was captivated by the lights. I can't tell you how many times this December I found her just staring at them! The boys left Santa Christmas rice krispies and chocolate milk (I bet you didn't know Santa prefers chocolate milk to the regular kind). 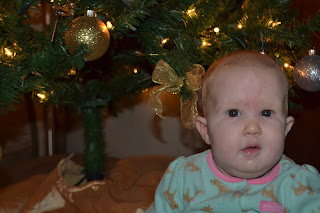 Dustin was a little demon to the tree this year! He kept pulling the ornaments off and throwing them around the room. One day he got out his baseball and threw it at the ornaments to knock them down. The next day he decided to throw nativity pieces at the ornaments. He was obsessed with getting the star off the top of the tree too. Eventually he knocked the whole tree over and stole the star. When I asked him what he was doing, he said he needed the star because he was a pirate and it was his treasure. It didn't matter how much he got in trouble, or how much I threatened to take the tree down. "It's just too tempting Mom. I know I shouldn't mess with it, but I just do." Needless to say I'm glad the tree is down now. 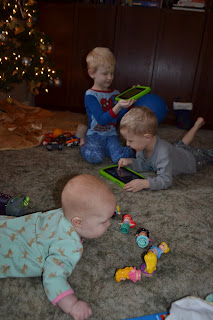 Christmas morning started at 7! The boys ran out to the living room to see if Santa came. They exclaimed with delight at all the gifts under the tree. Then Logan says "Stop. We need to say a prayer and thank God that it is Jesus's birthday." So before even one gift was opened, we prayed. He makes me so proud with the things he comes up with! I think we have a new family tradition. They played and played all day long. Around noon we shoveled the snow we got the night before. 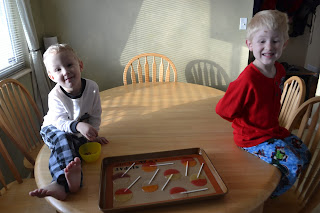 The boys got the ingredients to do a few candy experiments over Christmas break. Their favorite was making lolly pops! They thought it was fun and the candy tasted good. We'll have to do it again. 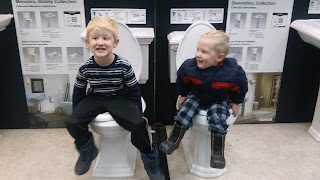 We decided to remodel our basement bathroom over the week and a half he had off. The space was laid out poorly, so we had to move a wall. It was a lot more work than we expected... so it's not done yet, but it will be really nice when it is completed. It consumed almost all our time off! Dave and I are exhausted, bruised and ready to be done with construction forever (too bad I want to put canned lights in the living room and eventually redo the upstairs bathroom and kitchen floor...). We did get a sledding trip in and some movies, but that's about it! 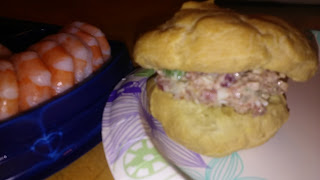 Oh and I guess we did celebrate New Years with tasty food! I made Gluten Free Cream Puff Shells, filled them with Ham Salad and we had some Shrimp Cocktail with a cheese platter from Costco. I'd never had ham salad before and it was FABULOUS! Dave made a second batch so we could enjoy it longer. It's a great way to use up extra ham.