In which the toaster oven goes up in flames (literally)

A few days ago I got a call from Alison asking if I could babysit Andrea so she could go to her sister Katie's Endowment. Absolutely! Since Dave told me Tuesday that he needed to bring a treat to work on Thursday, I knew I needed to get some baking done, so I decided to do the baking in the morning rather than in the afternoon when I had two babies. Wednesday is also laundry day, so I thought I could easily get this done while juggling two loads of laundry.

First I started some Rocky Road Brownies for Dave's work. We created the recipe last week, and just can't get enough of them! While they were baking, I started a batch of Samoa Bars (think Girl Scout Cookies). While in the middle of baking the cookie layer, I started mixing up a batch of Banana Bread (mini loaves to bring to neighbors with two other flavor breads). Then I remembered I needed to toast the coconut to go on top of the Samoa Bars.

And here is where I got overwhelmed... Logan decided it was time for a nap, so I put the coconut in the toaster over to brown, and carried him into his bedroom for nap time. As I was in the middle of telling him Andrea was coming over so he needed to rest so he could play later, the fire alarm goes off! Then the second one starts blaring and Logan starts screaming.

I run into the kitchen and the coconut had combusted, flames were lapping the glass door. So I grabbed the baking soda and dowsed the fire. Needless to say I spent the rest of what started as such a productive morning cleaning up my fire. And the Samoa Bars didn't even turn out! All that work for nothing.

We had fun playing with Andrea when she came over. She danced like a mad woman! With 3 teddy bears, but they weren't jealous of each other. Nap time for her was interesting. Mike said to read her a story, then wrap her up tight in a blanket and she would fall asleep. So I did so, walked out, and a few minutes later went to peak. She was inch worming herself to the edge of the pack and play I put her in, then she managed to stand up burrito style and peak out at me. So I laid her back down and we tried again until she fell asleep.

As for the Rocky Road Brownies, they're super easy, and well worth the work 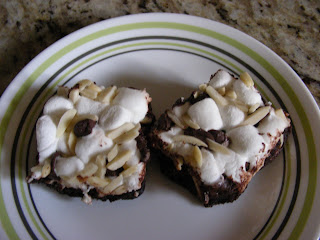 Make brownies according to directions, but remove from oven 5 minutes before done. Sprinkle with marshmallows, chocolate chips, and almonds. Put back in the oven for the remaining 5 minutes. Let cool most of the way before serving. To cut, use a butter knife and dip in water after each cut.
Posted by Amy at 9:23 AM 2 comments:

Dave finished his finals! It was a stressful 3 weeks or so, but we survived. There were three days in a row that Dave left before I got up and came home well after I'd gone to bed (try two in the morning). And with Logan being in a fussy phase (crying from 6pm to 10pm or 11pm), it was a hard time for the whole family! 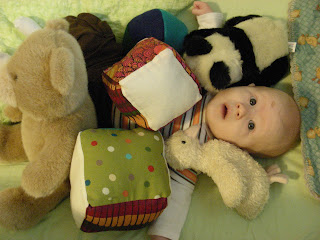 But now he's home by 6:30 every night and can help me put this little guy to sleep... covered in toys. Suffocation hazard if I didn't find out this is Dave's idea of putting Logan down, but Logan loves to play with Dad before bed.

Friday night my parents babysat so Dave and I could go to dinner and a movie. It was so nice to not have to fight Logan for my plate of food or pause the movie to put him to sleep. When we got back it was well past bedtime, but Logan was laying on the floor with Mom, Dad and my cousin Emil all playing with him. Logan was in heaven with so much love and attention. I think it was a letdown to have Mom and Dad come home and put him to sleep! 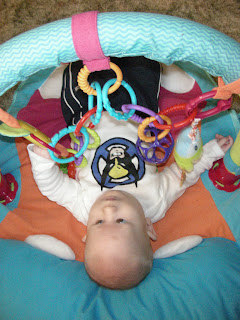 Dave just loves to pick out what Logan's going to wear, and he always picks one of three super hero shirts we made before Logan was even born. So if you see Batman, Wolverine, or Venom, know that Dave dressed the little guy!

It's just been so nice to have Dave home! Last night Logan and I met Dave up at his work and we went over to Temple Square to see the lights. It was fun, and I think Logan liked it too. He certainly looked around a lot. We drove home and Dave surprised me by stopping to get some peppermint hot chocolate and a redbox movie. So a happy ending to a great FHE!
Posted by Amy at 10:08 AM 1 comment: 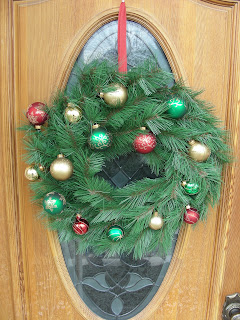 Thanksgiving went by so fast! I can't believe it's already December! I've got most of our Christmas decorations up, and and trying my hardest to finish our stockings. I also have several ornaments my mom got for us last year after Christmas that I attached to a wreath for the front door. Hopefully I get that done in time too. I did complete the beanbag Nativity set I've been working on, and it looks too cute!


As for shopping, we're pretty much done. We aren't buying a ton for Christmas this year, so it was pretty easy. I just have to pick up a few gifts for our family gift exchanges and once Dave's out of school for the semester we'll need to buy about 2 more gifts to complete our little family giving. 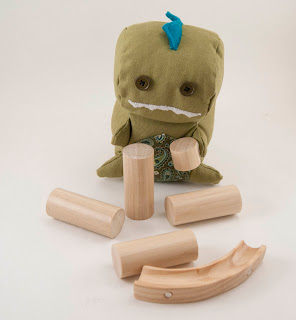 Dave surprised me with the need for a monster stuffed animal over Thanksgiving. Fortunately I had picked up a book from the library on how to make toys, and there was a pattern I tweaked. I worked like crazy, but was able to get it done for the photo shoot he had "scheduled" for Friday. The book's called "Wee Wonderfuls" and I know Heather would just LOVE it! I plan to make a few of the other toys for baby gifts and presents for Christmas (so if you get the book Heather, I'm making some of the Mermaids for our Christmas exchange). Just one more project to complete, but it should be a fun one.

I scheduled Logan's 4 month immunizations this morning. I found a Government run clinic that's 15 minutes away and they only charge $5 total for all 5 immunizations he needs. That's better than the $20 copay when we were insured! We applied to get Logan into CHIP (government subsidized insurance), but haven't heard back yet. And since it's time for Logan's next immunizations, I figured it was time we took him in.
Posted by Amy at 3:28 PM 3 comments: