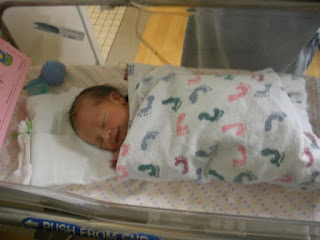 My sister-in-law Angela had her baby on Sunday! A sweet little girl 6 lbs 3 oz and 19 inches long. And TONS of hair. Holding her I realized she is just about the size Logan was when he was born (6 lbs 1 oz and 18 inches). It's crazy to think he was ever that small, especially since he's now 18 lbs! Logan's not quite sure what to think about Lindsay, especially when she cries, but I'm sure they'll have tons of fun.

Logan's doing great! He's always such a happy baby. He started saying dada last week (much to Dave's joy), and just loves to jabber in such a serious way you know he thinks he's saying something. He loves trying new foods, but especially loves green veggies (like broccoli and green beans). He also loves strong flavors like pineapple, grapefruit and orange.

He's also started making logical connections, like when I get out the swaddling blanket, he knows it's time to protest sleeping. And when I tell him "up" he puts his hands up so I can lift him out of the highchair or walker. When I tell him "Daddy's home" his little face lights up and he kicks his legs excitedly!

We're planning a big bike ride for some time this weekend. We found a bike trailer at the REI Garage sale, and spent all of our yearly dividend on it. So score, we didn't have to pay for it, but sad that it only lasted 5 days into the year.

I ordered a bike helmet online for Logan, and it should be coming soon! I told Dave we can only ride on the Jordan River Trail (a paved trail that allows bikes, runners, and walkers) until the helmet arrives.

Other than that, we're surviving the last month of school. Dave's super stressed about final projects, his portfolio & resume, and his meeting with about 8 companies next week. But I know he will make it through and will be SO glad to be done. Eventually... But for now we just survive!
Posted by Amy at 9:36 AM 3 comments:

Catch Up and The Wave

Long time no post... It's been another whopper of a month. First Logan decided he was no longer sleeping through the night. Something to do with rolling over waking him up. But after two weeks we found swaddling him solved the problem, so our 7 month old is again being swaddled. It's a lot harder with him being 17+ lbs, but worth it to have him sleeping from 8 pm to 7 am again.

Logan got sick for the first time, and that lasted a week and a half! Runny nose, little coughing, little throwing up for two days, and major need for cuddling. So I didn't get much done for two weeks (it took a few days to clean up and get the house back in order). But we survived and Dave and I didn't get sick!

We spent a 4 day weekend down at the cabin for Spring Break. My parents were down there too, and we had a relaxing time. We got to do the hike "The Wave" which you enter a lottery and 20 people are picked a day to get to hike it. Some times there are 1,000 people applying in one day so odds aren't always great. My parents have entered it 5 times now and haven't gotten to go. BUT thanks to Lucky Logan, we were the first ones drawn and got to go! 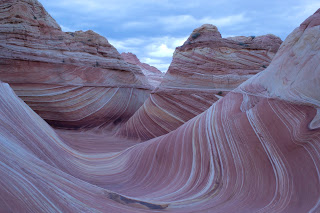 It was a beautiful winter hike! The only complaint was the weather. The sky was threatening to rain all day and we were constantly switching between our winter coats and short sleeves. So weird, but at least it didn't rain! 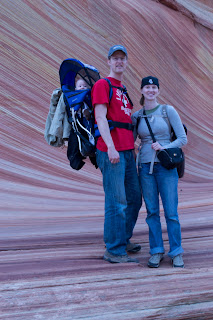 We tried out Logan's bigger carrying pack (on the back instead of the front). He didn't seem to love it as much as he loved his front carrier, but it's a lot more comfortable for the parents to use! We still need to attach one of my old Camelbacks onto it for water, but it worked well for now.

Other than that we helped my parents with some work (repairing the fence) and visited with Grandma and Grandpa Yoder. We also had a relaxing day at the cabin and headed home before it got too late.

Now we're back and I'll spend today unpacking and getting everything back in order. I'm always surprised by how long it takes to get everything put back together after a trip. But it was worth it to have a little bit of a break!