It's been a tough week here in the Plastow house. Monday and Tuesday I was feeling nauseated, so we didn't get much done, just hung around the house. Tuesday night while Dustin and Logan were coming up the stairs (messing around/rough housing) they knocked each other over and rolled all the way down landing in a crying pile at the bottom. I calmed them both down and put them to bed for the night.

The next morning Dustin was complaining that his neck hurt, especially when he moved it or tried to get up on something. So I ended up taking him into the Dr, expecting it was a sprain. But it turns out he has a broken collar bone. We were in and out of doctor offices all day Wednesday getting x-rays and seeing a fracture specialist. They originally scheduled the specialist for next week Wednesday, but when I explained I am due next Monday, they squeezed him in immediately.

The Doctor told me this is the best bone to break because if the angle of the bone is less than 90 degrees, the body will pretty much fix itself without intervention. Dustin's bone is less than 10 degrees off so the Doctor is confident that it will heal itself in the next 3 weeks. We have a follow up appointment then to make sure his body did it's job. So now we have to try to keep Dustin in a sling and not play rough for 3 weeks. It's going to be quite the challenge with this active little boy.

Wednesday night the boys also both came down with fevers and stomach aches. Fortunately no throwing up, but still you could tell from looking at them there were miserable. So we watched a movie, drank a ton of water, and just snuggled. Dave gave them both blessings, and they were in bed before 8:00.

Somehow I was able to get the rest of the pre-baby baking done this week (we now have frozen breakfast cookies, frozen muffins, granola, frozen pancakes, frozen hot pockets, and frozen PB&J sandwiches). So on top of all the freezer dinners, now we'll have a few weeks of easier breakfasts and lunches too without going crazy eating cereal or oatmeal every day. I was considering doing more, but with the way things went, I decided to be done.

Thursday and Friday were spent catching up on everything I missed doing during the remainder of the week, and Saturday we didn't do much. Just hung around the house and got a little work done. Sunday more of the same. We went to church, headed to Murray park for some playing and a walk to visit the ducks, then we had a casual dinner and more play time before dinner.

Sunday was my due date, so we're hoping for a baby this week. I'm rooting for Tuesday. But we'll see what happens.
Posted by Amy at 3:36 AM No comments:

Over the past several months I've been trying to inexpensively girlify the nursery. I wasn't planning on changing anything, but Dave got excited that we're having a girl and told me he hoped I was going to do something girly to the room. So I decided I would do what I could under $20. I did pretty good. The grand total was $12.50, which wouldn't have been possible if my Mom hadn't made a new baby blanket! But she is amazing, and didn't it turn out adorable?!? 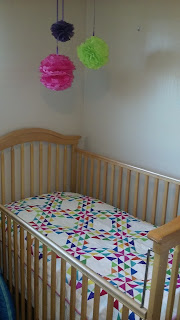 The colors she chose for the blanket were what inspired the colors of everything else! 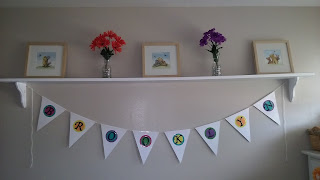 The pooh paintings Dave did before Logan was born, and I decided I loved them so much I had to keep them. If we don't have any more kids, each one will end up with one of the paintings if they want it when they're older. The banner I slowly glued together over a few weeks because my rubber cement dried out and I can't find any at Walmart (did they stop selling it or what?). So I had to use Elmer's glue and if you don't press it while it dries, it wrinkles/bubbles. I had the paper on hand, so that saved me money. And the flowers and vases are from the Dollar Store. 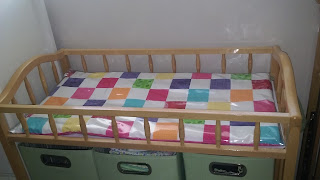 My changing table mat previously was greens, blues and yellows, but after seeing the colors my Mom picked, I decided it had to be changed to something that matched better. This was a project when Dave was at Scout Camp. I had all the material in my scraps except the dark pink and red. So I spent $2.50 here buying a few inches of each. The vinal I had was a pain to work with, but turned out well, and will be super sturdy. 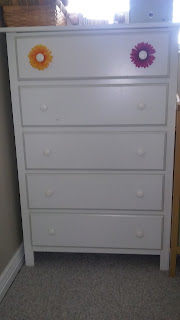 $2 more was spent just to get these flowers for the knobs. It's a little more girly than I typically go for, but I felt it matched the rest of the room. 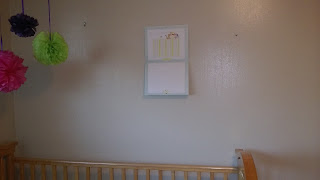 So next I need to finish a wall hanging quilt to go above the crib probably on the right. My mom sent me the extra squares from her quilt, so I'm going to use that to make something. I laid it out last night, and it looks like I need to make 4 more half square triangles, and then fill in some whites. I'll probably do a border or two as well to make it framed and a little bigger. We'll see. on the left will go a picture of the baby once she's born. 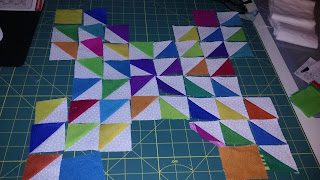 Other that that the baby blessing dress is done! I wasn't planning to make one, but I couldn't find one I loved. I'm not super girly/frilly, so I wanted something simple and classic and not $100. I got this pattern from my Aunt Melissa who found it free online. I added a belt (which I will cut and decided if the bow goes in the front or back after I have a baby to try it out on, and I will probably make a headband after I have a head to size up too. 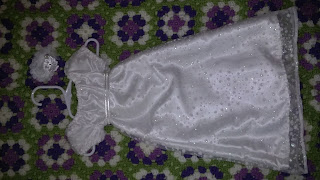 Finally I made a few onesies while Dave was at Scout Camp too. I just got on Pinterest and copied ideas I found there. I'm not super girly, so nothing crazy... but I did throw in some purple. My friend is moving and gave me most of these white onesies (left over from a baby shower she threw), and they are all in different sizes. So they'll fit at different times. Which is good, because apparently I like arrows, and a few of them feature arrows. Which is fine if they're spread out over a year worth of sizes. 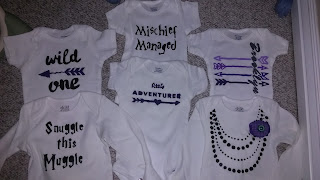