Fun Times Among the Hard Times.

It's been a rough week in the Plastow home.  But we managed to fit in some fun too. 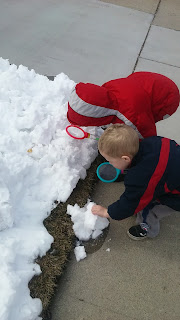 We walked down the street to visit our neighbor Maurine. She's a sweet little widow that lives on the corner of our block. We visited with her  and she had picked up magnifying glasses when she was at the store earlier in the day for the boys! Oh man they had a blast looking up close at everything from the material on the couches to the grains of snow (it looks like little crystals!). It was fun to see them discover things close up. 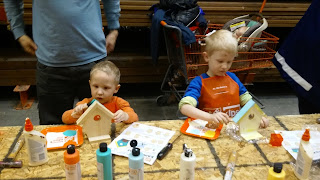 Saturday we went to the Kids Building class at Home Depot. It's a free class they do for kids once a month. Since we spend much of January and February in the hard ware store, we had MANY opportunities to sign up for classes. The boys built and painted rain gauges. They look like little bird houses, but have a cup to measure the precipitation. 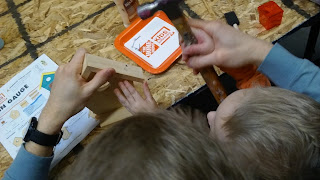 The boys loved that they got to do their own hammering and painting. It was fun! We'll have to sign up to do it again later in the year. Brooklyn spent the duration of the class sleeping in her car seat, which was perfect for us. 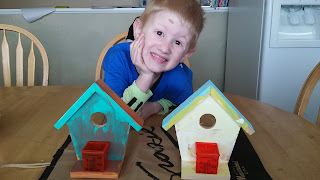 It's been very nice temperature wise around here so Saturday we also put the trampoline back up. All the kids had a blast jumping on it. Even Brooklyn (who loves to bounce in her jump-a-roo) enjoyed being held while Dave or I jumped around with her (she would giggle uncontrollably). But Sunday night it started snowing again and sadly we haven't been back on the trampoline since.

Saturday Dave, his Dad and brother Jon all went out to dinner at Zupas and to a hockey game! They had a great time, and the kids and I had a movie night and I watched a chick flick and did some crocheting until Dave got home at 10:30. It was a great night out for Dave and a relaxing evening for the kids and I.

Sunday we had home teachers and a generally relaxing day at church and at home. We decided to make some chocolate covered peanut butter rice krispy treats (they were for FHE on Monday but we just had to try them Sunday too). Dustin also tried to bear his testimony on Sunday. He has been wanting to so bad and practiced all last month and practiced 3 times on Sunday but when he got up front he froze. So he said maybe he will try again another day.

Monday Logan asked if he could be in charge of the FHE Lesson. He decided to teach about kindness. He told us being kind is being nice to others and we practiced with dinosaur toys different difficult situations that might require kindness. Dustin wanted to be in charge of the treat, prayers and everything else. So we helped him with all of the above. Over all it was a successful FHE.

Tuesday the highlight of the day was painting. We got out the watercolors and made several masterpieces. They are "still drying on the kitchen table so don't move them MOM!"
Posted by Amy at 8:01 PM No comments: