Zion's was just the break we needed! Dave thought it would be nice to cook all kinds of fabulous dinners while we were down there, so we came with the fixings for Chicken Enchiladas, Pesto & Pasta, Chicken Parmesan, and eggs with sausage (for breakfast one day). I convinced him that we could eat leftovers for some of the nights. I had to work a half day, so on the way home I picked up In-N-Out (Dave's FAVORITE fast food). We ate that, packed up our stuff and hit the road!

Mom & Dad came down that night as well. They needed to prune the apple trees at the cabin and get a little work done around the house. Saturday morning Dave helped  my Dad with the pruning, my Mom worked on some inside projects, and I worked on a few projects of my own. We hiked the Watchman Trail after lunch. Neither Dave nor I had done it before, and we were impressed by the view. We plan to do it again some time when the plants are more green (well, as green as the desert can be). Here's a picture of the view from the top: 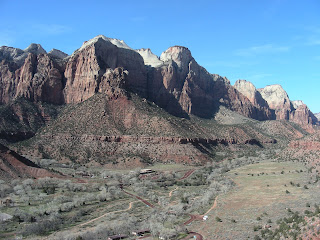 Sunday we headed down to Hurricane for church, lunch, and some serious hearts! It was great to see Grandma & Grandpa: they're looking great, and we had tons of fun. Dave just loves my grandparents, and enjoys getting to know them better. He hasn't been very close to his Grandparents, so it's nice for him to have that type of relationship with mine.

Monday we hiked Emerald Pools and the Overlook Trail in the morning. I think every time we go to Zion's we hike Emerald Pools, but the Overlook Trail was new to us. It's right after the tunnel and goes up, through a cave and again has a great view! As you're heading up the trail you can see one of the slots below (I believe it's Pine Creek, but it's been a while since I've done that one). It was just what we needed to get out there and hike like crazy! 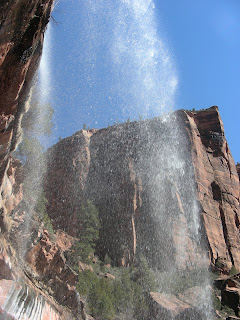 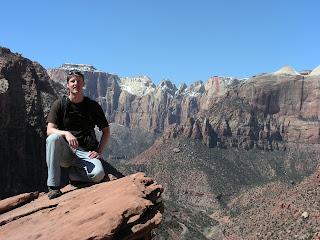 Tuesday we tried to hike the Sand Bench. It's about a 6 mile trail that should take 4 hours to complete. Most of the trails in Zion are clearly marked, when you come to a fork in the road. Sand Bench is not. We got an hour into the hike and the trail split into 3 paths. I said the middle one looked correct, Dave chose the one veering right. I'm still not sure which trail was the correct one, but after following the right trail for 3 HOURS without finding the loop around that was described in the guide book, we decided we had picked the wrong trail.

This path lead us up hill on a completely sandy trail. It's tough to hike up hill in sand! It really made our calves burn, but the view at the end was beautiful! Because the snow is melting right now you could see a waterfall at the top of the mountain in front of us, and if you turned around you got a up close view of the Court of the Patriarchs. Beautiful, but not what we thought we were getting ourselves into! 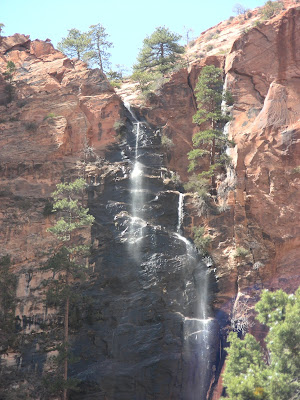 It was just so beautiful and so relaxing!!! We needed a break from school and work so bad, and this gave us exactly the break we needed. Thanks Zions! 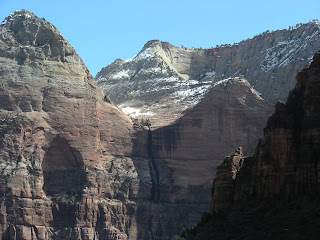 Dave has Spring Break from school next week, so we decided to use up all my vacation time and head out to ZIONS! We both need a break so bad, and it will be nice to be away from all our worries, phone reception, and internet for 5.5 days. The weather is supposed to be beautiful (high 60’s to low 70’s)! With a 0-10% chance of rain, it will be perfect to do some hiking, petrified wood searching, and general relaxation! My bags are packed, the food is purchased (some of it is already prepared and frozen for re-heating). Tonight I’ll pack up the food, try to get Dave to pack his clothes, and tidy up the house a bit. I’m so ready for this trip.

I’ve also been prepping for the new addition to our family (the dog) and think I have everything we need to welcome her into the home when we get back from Zion’s. We have a little kid’s house in our back yard that will double as the dog house for Cheyenne’s time with us. It has windows, linoleum flooring, and a doorbell (just in case). I found a stained feather blanket (on Craigs List for free) that I’ve piled in one corner so she can relax and get away from the rain in comfort.

One of my co-workers has a huge dog that is also home alone all day and she recommended having a large bucket filled with water in the yard so she always has enough to drink. So I picked up one of those construction buckets for $2 at Home Depot to quench her thirst. I figure I can use it to water the nectarine tree every few days so the water doesn’t start growing things. We need to keep the tree properly hydrated anyway and I’m sure she won’t drink it all.

I’ve also purchased a baby gates to go at the top of the front stairs. Since we never use the front stairs the plan is to put her doggie bed on the landing and close her in there at night time (because we don’t want her sleeping on the sofa or trying to get into bed with us). We’ll see if this works out, but it sounds like a great plan.

That’s about it for now! Wish us warm weather and tons of fun
Posted by Amy at 1:03 PM 2 comments:

For the vast majority of our married life Dave’s wanted to get a pet. A dog to be specific. Not just any dog, a big dog! In case you didn’t know BIGGER = MANLIER & BETTER. I’ve never had a dog; I never even had the desire to have a dog. So I started looking into dogs to see what I would be ok with and what we could handle.

When we originally had this conversation we were in an apartment without a yard, and knew we couldn’t keep a dog locked up in that place. When we moved into our house we again had the conversation and agreed it wasn’t fair to leave a pet alone all day long. And since we weren’t willing to commit to two pets, we had come to the decision that until I’m no longer working we wouldn’t get a pet.

Then my Uncle James Brown called… He has the nicest, calmest husky I’ve ever met. It’s a great dog. Although it likes to wander away and escape let off her leash, she’s got the temperament we would want in a dog. James and my Aunt Rebeccah are moving to Washington and asked us to watch the dog (Cheyenne) until they sell their house. The deal breaker is they will pay for all doggie expenses and a little extra for our “troubles”.

So that means at the end of March we will be the owners of a husky indefinitely. I’m a little excited to have a non-committal pet. It will be good to get a feel for if we really can handle the obligation of owning a pet without having to figure out what to do with it if the answer is “we’re not”.  It’s also nice that this test won’t cost us a thing. I’ve thought several times about how a “Rent-a-dog” place would be the perfect solution for many, and this is as close as we’re going to get!
Posted by Amy at 12:08 PM 3 comments: