In which we discuss the nursery and baby thing 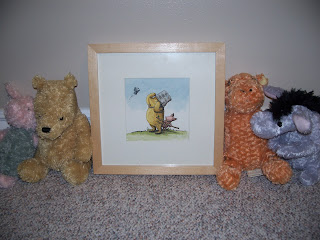 It's official: I finally feel pregnant! I'm finally starting to look pregnant (only at night time), and I think that was the biggest step. I went to distribution at lunch last Thursday, picked up the children's scriptures, children's hymns on CD and ordered maternity garments. There's so much church stuff for kids that would be fun to have, but I did my best at controlling myself. I've got years to buy all that stuff!

I also had my third doctor's appointment this morning. Everything is still looking perfect! The babies heart beat, my blood pressure and weight, and my waist is measuring good. We scheduled the ultra sound for March 23rd. We're just too excited to find out if we're having a boy or a girl. 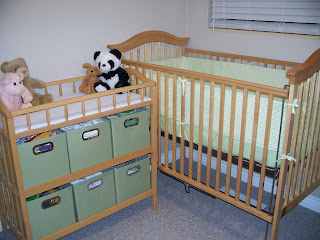 We've been pretty busy in the nursery. When we moved into our house there was a garage sale down the street and we found a crib that was in good condition for $30. The owners were the grandparents, so this crib only got use when their grand kids were visiting. We put it up this week for a few reasons: (1. it's a drop side crib, and I wanted to see if it was safe, or if we needed to buy a new one (2. I wanted to set it up before I was way too big to help (3. it's been sitting in the shed for almost two years, and it needs some serious cleaning!

So we've set it up, wiped it down, got in and shook it like a mad man (even had Dave bounce on the drop side) and decided it's safe. If we can't make the thing fall down, chances are a 30 lb baby won't be able to. Besides, both our parents used drop side cribs and neither us nor our siblings are any worse for the ware. So now that's cleaned up our nursery has all the essentials! 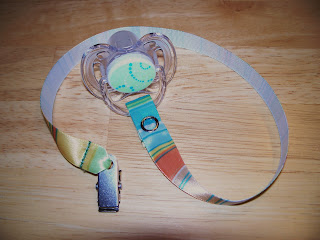 I've also been working on a few gifts for a baby shower for our friend Amanda (Andy Poulson's wife). She's due in April and is had her shower was last weekend. So I've been putting together what I call the diaper bag survival kit. I bought a lot of the mini products you can buy in the travel section, a few toys and a change of clothes.

Also, I made a few things that I also got enough for my diaper bag as well. First is a pacifier clip that you can attach to different pacifiers. It was super easy and really inexpensive. I foresee myself making a few different colors of these so my baby's pacifier matches his/her outfit. Also, I made a few simple spit up cloths. I'm getting better at the quick and easy ones, since I didn't have the time to crochet these. I had other projects in mind, but since I only got two weeks notice, they just didn't get done before the shower. 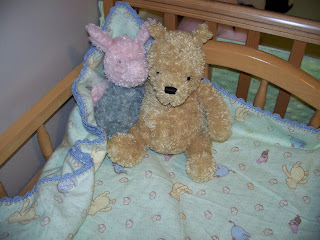 While I was at Girls Weekend at the cabin I worked hard on one of two receiving blankets my mom bought the material for. The idea is for me to crochet a scalloped edge around both, but it's taking a lot of work. I took a picture of the first one, even though it's only half way done at this point. I just couldn't help myself, it's already too cute! 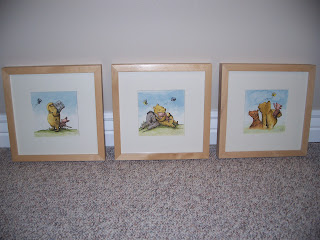 Last, but not least, Dave finished the Whinny the Pooh pictures he's been working on for decorating the nursery! He drew them months ago (since I wanted to give a copy of them to my Sister-in-law for her baby shower), but only finished them recently. He sketched, watercolored, and outlined these bad boys. I matted and framed them ($2 in the As-Is section of Ikea). I'm so excited to get these up in the room, but will have to wait until I'm sure on the placement of the crib. I would like to place these on a shelf above the crib with classic Pooh stuffed animals, but we'll see if that actually works out.

So the Nursery is slowly starting to materialize from the mess that was my office! Hopefully we'll be all done by August.

Last Thursday was my third quilting class. It's been crazy busy around here, so I only finished my two squares the day before and didn't have a chance to post a picture and write a blog post of them. So these are the two squares from class two: 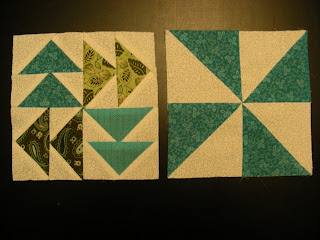 Half Square Triangles and Flying Geese. I was a little confused by the flying geese, and could use some practice to get them to line up better, but over all I love how that square turned out! The Flying Geese square is probably my favorite one so far. After the class is over I'll make more squares with these shapes, since our teacher gave us a few patterns for star shapes and I just love those. 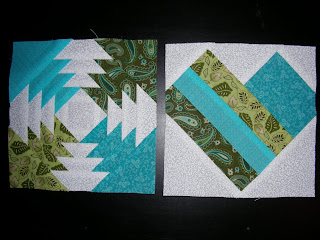 This week we learned paper piecing. It's interesting because you print out a pattern, and sew the pieces you cut together onto the back of the paper. It was really interesting to learn, although not half as intuitive as the rest of the quilting has been so far. I liked how fast it was done though. I was about to crank out the two hearts in about an hour, although the Pineapple design took a lot more work. It was also really nice I could use my scrap pieces to put these together. So material that might have gone to waste otherwise got used after all.

Sadly enough, I'm going to miss my class next Thursday because we're having a Ladies weekend at my parent's cabin! Excited for the trip, but sad I'll be missing the class since it's on Applique. That's the only quilting style I was really nervous to learn. I've asked the teacher if she would print out extra handouts for me, and I'm sure she would briefly review it with me during the next class.

I'm officially half way through my classes now, and I've really enjoyed them. Some of the first patterns I could have taught myself, but the Flying Geese and this week's paper piecing I know I couldn't have gotten right without guidance. I love most of my pieces, and am so excited to get done so I can make them all into a lap quilt for the living room! It's going to be so cute, and I know I'm going to love picking this up as a hobby.
Posted by Amy at 7:12 AM 1 comment: 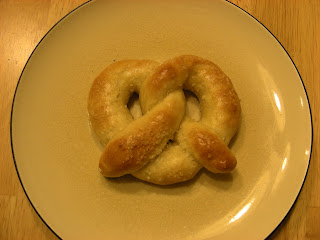 I love Fridays! Partly because the week is over and it's finally the weekend. Partly because I have a strict "Amy doesn't cook on Fridays" rule. This doesn't necessarily mean we'll be eating out, most of the time we'll have leftovers or canned or frozen foods that don't really require cooking. But Dave's been really pushing for a baking Friday all week.

He's thrown around every dessert idea from Fruit Pizza to very involved Cakes. Finally he found my sweet spot and suggested home made pretzels. I've been just dyeing to make some cinnamon sugar pretzels since I saw the recipe on a blog my friend recommended. I've shown the picture to Dave a few times and told him how much I want to make them. But we've just been so busy lately that it hasn't happened.

So we made a date night out of it! I mean honestly, when else do you have 2 1/2 hours to devote to making a snack? We got a pizza for dinner (you better believe I wasn't going to wash other dishes on top of pretzel dishes), grabbed a movie, and went to work! They turned out fabulous and we will be making them again, although probably not frequently since they take so long to make. 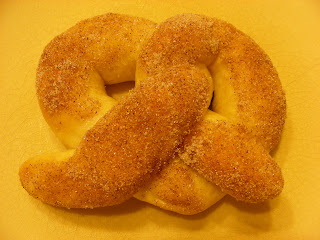 I took the recipe from Sprinkles of Parsley. The only change I made was to make the dough in my bread maker so we didn't have to worry about them and got an hour of movie watching in while waiting for the dough to be ready. Make a date night out of it! You won't be disappointed
Posted by Amy at 1:40 PM 4 comments:

The Bookshelves are Complete!!!

Life has started to move in fast forward! January's already over, and it feels like yesterday was Christmas. I have a "To-Do" list a mile long that's only getting longer. Dave has a half day of work on Tuesdays, so yesterday he finished his home work early, cleaned the house and cooked dinner (a new Cheese Broccoli soup in the crock pot) all before I got home! I'm so grateful for his thoughtfulness.

Tonight I headed over to Ikea to buy the last two cupboard doors for our bookshelves. When we originally bought them, they only had 6 doors on hand (even though the online inventory said they had 10), and we needed 8 total, so I've been patiently waiting to finish our shelving until they got more in stock. Now they've been purchased, installed, and look fabulous! 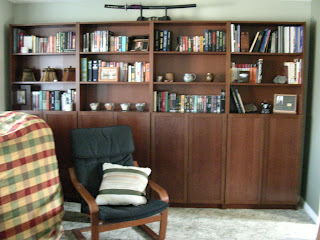 I've already moved all our books into them (I thought we had more)! They just complete the room, and I've been visualizing these since we moved in a year and a half ago. The bottom cabinets have been stocked as well. Two are filled with my sewing/crafting supplies, one with games, and one with food storage (just loose #10 cans).  It's so nice to have a little more storage space and have all the books in one place so I can browse our library when I'm looking for something to read.

I need to get these a little more organized. Right now I have a religion, classic, sci-fi, travel section, and a shelf of unread books. But the rest need to be sorted out. I'm sure it will come with time, maybe even organization by author if I get really daring. But for now I'm just so happy with my shelves, I'm even reveling in the lack of organization! And for me, that's big. 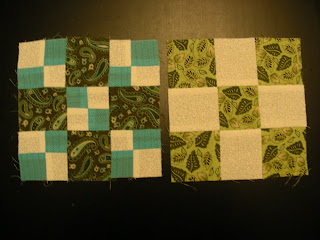 Last week was my first quilting class. I think I'm going to enjoy it! It was a little long, especially the introduction and reviewing what supplies we needed to get. But over all we learned a lot of good techniques and I got to meet a lot of new ladies that I didn't know before. I thought most of the class would be older women, but there were about 6 ladies around my age and one of the young women. It was nice to get to know them better.

We were taught how to make two squares this week, the 9 patch and the four patch, and our homework was to create one of each. I finished mine last night, and they turned out ok, but the four patch is not as strait as I would have liked. Also, they were both supposed to be 6 1/2 inches square, but each is about an eighth of an inch off. I guess I sewed my seams a little to large and it effected everything all around.

We're having 6 total classes, and we'll learn two different patterns each week. I'm hoping after these six classes I'll have a good grip on how to quilt. My mom signs up for a class once a month, and I'd like to take it with her once I've got the basics down. That class is something like $35 and if you go to all the classes and make your one square a month, then you get all the material free. So hopefully I'll be skilled enough by then to take the class.
Posted by Amy at 7:18 AM 3 comments: