The baby room is officially done!

We've been projecting around the nursery! I didn't love how the furniture was placed previously, so I was hesitant on hanging up our pictures or do anything that would leave a mark. A few weeks ago my sister Heather sent out picture of her nursery, and it motivated me to rearrange yet again. Now I just love the layout, so I've started hanging up pictures, calendars, etc. 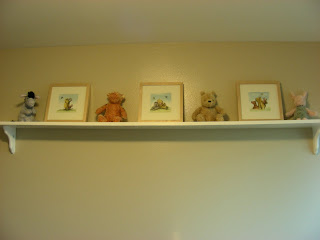 Dave made the cutest hanging shelf for the baby room! I hung it above the crib and placed the pooh pictures he painted on it with the 4 classic pooh stuffed animals on it as well. It looks just fabulous! It was intended to go over the window, but looked too cute over the crib on the longest wall of the room. 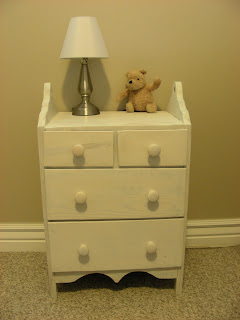 We were also given an antique bedside table that Dave refinished for me! When we got it, it was painted this horrible 70's green color, and it had all kinds of dings and dents on the side that showed it used to be painted white. But when I saw it, I envisioned this sitting beside the rocking chair in the baby room with a low wattage lamp on it. So Dave stripped it, sanded it, and white washed it. It turned out just perfect!

I wasn't a big fan of Dave's plan to white wash it originally, but it ended up looking good with the wood grain just barely peaking out of the wood.He's got a great knack for wood working so I really should learn to trust his judgment on these things. 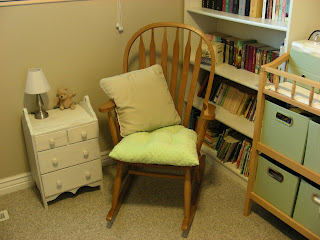 Also, I've had all the supplies out to finish sewing a new cushion for the rocking chair for several months, and yesterday I sat down and actually finished making it. I've been waiting to do it because the material I chose for it was too thin, so I was avoiding sewing it onto another piece of material. But it ended up turning out great. 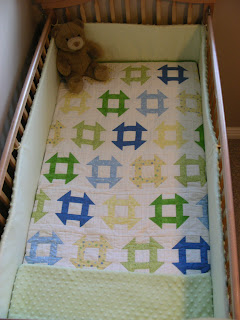 Also, my Mom finished making all the bedding for the nursery and gave it to us a few weeks ago! Doesn't the quilt look just perfect with the light greens the nursery is decorated? The crib is on the wall to the left of the rocking chair  and the little end table now, and it works so much better there than before.

That's pretty much the last thing I wanted to get done for the baby room. So we're now officially ready to have a baby move into our house! Too bad we have two more months before he should be joining us.
Posted by Amy at 3:44 PM 4 comments:

Life as a Daymaker

Yesterday I had a revelation. It's the little things in life that either make or break your day. When someone goes out of their way for you, it just makes the day go better. When they are selfish and make your life harder, it can turn your day sour fast. This isn't REALLY anything new, but I had several examples of this come up yesterday that lead me to these thoughts.

First, one of the business associates I work with gave me a call yesterday. He really prefers emailing, and I generally only hear from him over the phone when something major is wrong. So when I saw his number, my stomach started to churn. I knew I didn't have time to clean up a major problem, but picked up anyway. He had called to tell me he had two NBA playoff tickets he'd purchased for me and a friend to use, expecting me to attend a certain conference. By the time he called, he knew I wouldn't be attending, but since he wasn't able to find anyone else to use the tickets, he wanted to offer them to me to give to a co-worker or someone else.

This made me smile because:

1. he valued our association enough to buy tickets worth a lot of money
2. even though he knew I couldn't use them, instead of selling them he offered to let me use them
3. it just made my day
Right off the bat I thought of two of my co-workers that were attending the conference that would love to go. One is the most hard core basketball fan in the world, and the other used to work for the Utah Jazz and loves sports in general. So I offered the tickets to these two and made their day! I could see their faces light up as I explained the situation. They talked about how excited they were to go in meetings (driving jealousy from the general male population).

Second, when I got home from an extremely long day at work, I found a chocolate cake, bagels, and a loaf of french bread on my back steps. There was a post-it note on the cake saying "Happy Birthday Amy! Frank". Which made me smile. I didn't know who Frank was right off the bat (I know at least 7 Franks), but it was nice to know one of the 7 was thinking of me a few days before my birthday. It ended up being an elderly couple from church that attend my Gospel Doctrine class, even though I don't really know them well. And Frank forgot to add his wife's name to the post-it!

I started thinking about a book I read about 8 years ago "Life as a Daymaker". It's about finding ways to bring joy and hope to people around you. Great book; I think I'll read it again. The author, David Wagner, really is committed to this. He gave me a copy of the book as I was on a plane home for Christmas one year.

Since I've had this revelation and tied it back to this book, I've been more determined to let the little things slide and go out of my way to make the life of those around me easier. I've been so focused on getting my projects done lately that I haven't stepped back to look out for others lately. Hopefully this will change things!

"No matter what I face each day, I remain determined to find a way to bring joy and hope to people around me. I focus on having calmness, compassion, humor, and a positive attitude." - David Wagner
Posted by Amy at 6:55 PM 2 comments: