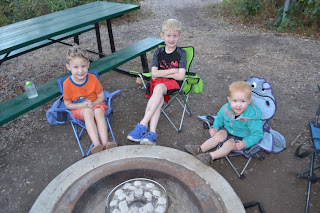 We had a great Labor Day weekend! It was our second trip camping of the summer at the Friendship Meadows campground. Because of the drought and fires we weren't aloud to have a big fire, but we were aloud to cook with charcoal briquettes. We got pretty creative with out cooking and had dutch oven pizza and breadsticks which didn't take long to cook and turned out fabulous! 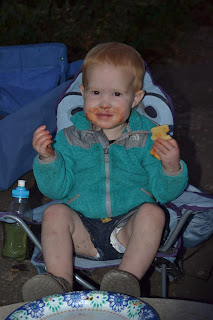 It was crazy prepping and I forgot to pack several important things like my shoes and bread for sandwiches, but it all ended up working out. Like my mother before me I always pack 100 times more food than necessary so we didn't go hungry, and it was the perfect 70 degrees so I didn't miss my shoes too badly. 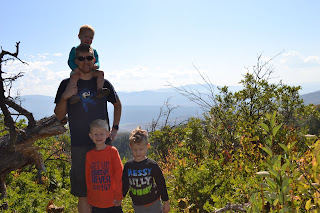 We got in late Friday, ate dinner and the kids were so excited about camping they said they didn't want to make S'mores and wanted to go to bed. They asked for a scary story so I told the Chicken Heart (because that's the only scary story I could remember from my childhood). Dustin said it was a little too scary so we decided on funny stories instead. It took a while for them to fall asleep, because they were enjoying their flashlights and playing. 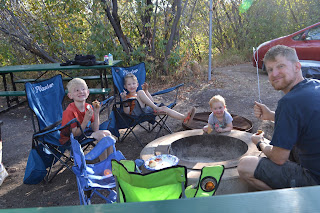 The next day we made a big breakfast of pancakes, eggs and bacon. Then we went on a few hikes and just enjoyed being in nature. We also decided to drive into town for an ice cream because that's just what you do after a hike (the influence of Papa Mike). 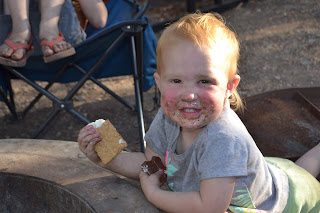 We decided we were up for S'mores after dinner so we made and enjoyed them all! By then the black dirt was really seeping in so we gave the kids bird baths in the sink before bed. One really cool thing we got to hear was the elk bugling in the morning! It wasn't too loud so it didn't wake up the kids but it was neat to hear. 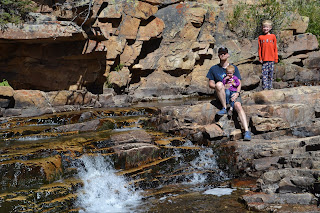 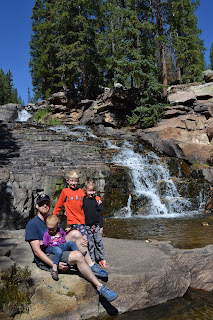 Sunday we packed up to head home! We took the long way home and visited a waterfall which the kids loved. The rocks around the waterfall were like little steps so we explored up and down the river for at least an hour before we had a picnic lunch. It was a great hike and we need to go back and do it again. 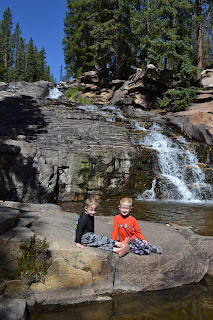 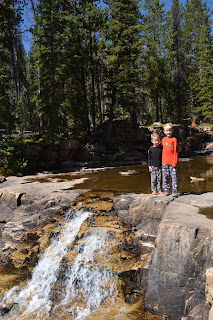 Dustin said it was the greatest hike ever!!! He says it relaxes him to explore in nature.

Since then we been getting used to our back to school routine. Logan enjoys school and made another good friend, Tyson. They have created their own alien language they talk in to each other and to Michael. Logan says his favorite class is gym class but he also really enjoys reading.

His homework requires him to read 20 minutes a day and we have to get about 10 small chapter books from the library a week for him to have something new to read every day. It's a little stressful to keep him in books he's interested but I'm glad he's a great reader.

He was very behind in math because of his atrocious school experience last year. This was a shocker for me because he was always top of the class for Math, but looking back at how horrible last year was, I'm not surprised. That is after all why we switched schools. We've been working extra hard and I think he's caught back up (he's getting 90-100% again).

Dustin has been working on his internet pre-school and getting to enjoy it more. He doesn't love it like Logan did, but we have transitioned from him crying that he doesn't want to do it, to only having to bribe him, to him doing it without a fight. I can even run upstairs quickly to get something done without him shutting it off (this is huge for us). He's learning his letters and excelling in math.

Brooklyn has been REALLY enjoying story time at the library! I selected the Pre-school story time because I thought it would be good for Dustin's social interaction to weekly meet with the same kids not at church, but Brooklyn has loved it the most! She dances for the songs, is captivated by the stories (scooted to RIGHT in front of the Librarian), and loves to do her craft all by herself! And she is so proud to show her craft to Dave when he gets home.

My friend Tenille came down from Idaho for the weekend! We spent the time sewing and eating delicious foods. It was fun to work on a table runner and chat. She ended up having to cut her trip short because there have been some major fires in Utah County and the air quality was killing her asmatic self. But it was great to see her and great to get to catch up and take a little vacation from working while she was here. The house is a mess, but I'm sure I'll catch back up in a few days.

For me it's been a rough month, but I'm hoping next month will be better! I'm hoping next month will be better. Dave and I are planning a late anniversary trip to the Redwoods and San Francisco and that is giving me something to really look forward to! I was talking to Linda last week and she pointed out we haven't gone on a trip, just the two of us since we had kids. We've given them to the grandparents for a night or two here and there while we stayed home but never gone on a trip alone for 7 years!!! It's been far too long! Hopefully the weather and fires cooperate so we have a great trip.
Posted by Amy at 9:11 AM 1 comment: