On Tuesday we discovered Logan's first tooth! It's the bottom left front one. He had spent all weekend being super cranky and ornery. Now I understand why. We're so glad it finally came in, and hope the next one follows soon. 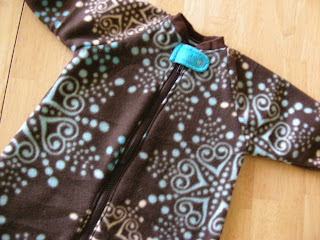 Or this afghan I started before I knew Logan was a boy, and didn't get around to finishing (don't worry I was working on boy and girl blankets, just in case). Doesn't Logan make a great baby blanket model? 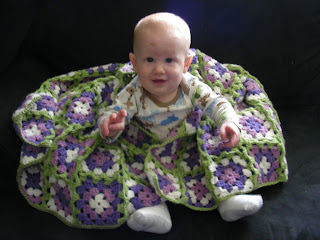 These pictures we finally got around to hanging in the bathroom are from October a year and a half ago. The pictures we took on our North Carolina trip, and the shells we bought on Ocracoke Island (also in NC).  The frames I collected at DI for a buck a piece, and I matted and put everything together, finishing only last week! There are 4 pictures of lighthouses and 4 shell pictures. 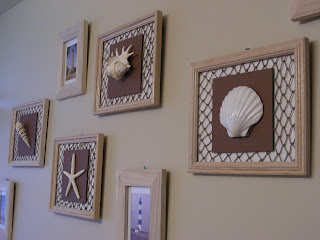 Finally, I finished two blankets for my sister-in-law April who is pregnant with twin girls. They're both bigger flannel receiving blankets, with a little image appliqued in the corner. She's not due until August, but I figured I'd get a head start. My sister-in-law Alison is also due to have a girl in July, so I have a few baby gifts to whip out soon. 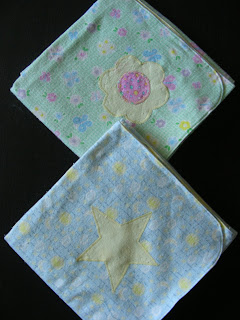 My sister Heather gave me some material she found at her husband's grandma's house to  make a purse. It was all cut out, I just had to put it together and add some ribbon on the front to make it more me. It was super easy, and I like the results: 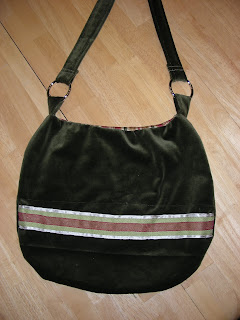 Also, I was given an Old Navy fleece jacket, and the arms were sadly way too small! This happens a lot; I have super long arms. So I cut it down, and re-sewed it to fit Logan. I can't say he loves it (taking pictures of him in it caused major tears), but he looks super cute. And it only took me an hour to downsize. 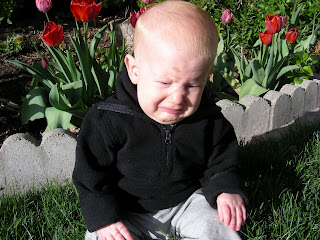 I made it 18 months size (even though he's 9 - 12 month size), because it's almost summer. I want him to get some use out of this. It fits him pretty good now, just a little baggy and the arms are long. So you won't be distracted by the crying baby, here's another shot: 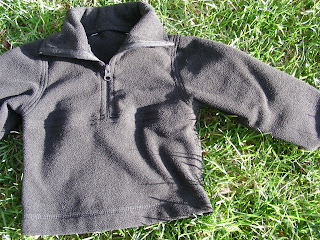 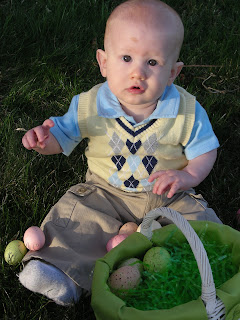 We didn't expect Logan to understand Easter this year, and we were not disappointed in that aspect. Most of the week prior wasn't spent seriously pondering holy week. It was more spent like this: 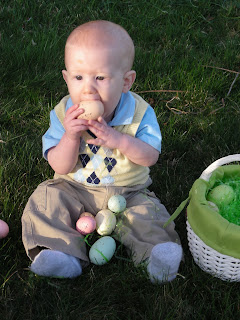 I had some eggs around the house decorating a variety of baskets, vases, ect. And Logan tended to get his mouth on them. With all the things he's been gnawing on lately I think teething is back! But we still have no teeth to show for it...

Easter was very relaxing and just what we needed. We tried to sleep in, but Logan ended up joining us in bed around 7. We pretended to sleep for another hour while he chewed on our blanket, pillows, fingers, and chins. Finally we got up and went to church, which was great.

I ended up inviting a single sister from the ward over for lunch, because she had moved in 2 weeks prior and her Easter plans consisted of "well, I got some egg dye from the store, so I'll probably dye something. So we got to know her a little better.

That was followed by the famous Sunday nap, a walk to the park, and some relaxing on a blanket time in the yard until the sun went down. We watched the third Harry Potter that night, read scriptures and called it good.

Somewhere in there candy was consumed and I don't know how but 5 peeps disappeared! Hum, I can't help but love them for some odd reason.

Nothing super exciting, but we had a good time. But how could you not when you have this little guy around? 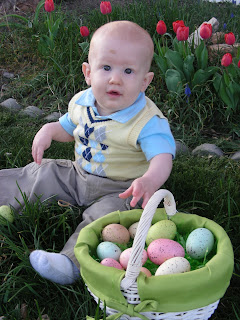 Conference & getting ready for Easter!

Before we start in on Conference, Friday Logan's bike helmet arrived in the mail! So we went on a bike ride to break it in. I don't know how much Logan loved it, but Dave and I had a great time! We haven't been on our bikes since last July (right before Logan was born). And it was so much fun to spend an hour and a half in mid-70 degree weather getting back  into it! I love the bike trailer, and I call it the "great equalizer" because I can finally keep up with Dave on his bike.


Dave, Logan and I had tons of fun enjoying General Conference this weekend! This year due to a HUGE amount of homework, we decided to spend most of the weekend at home. So, like my mother before me, I made all kinds of treats to make sure we stayed awake through the event. We snacked on a Spinach Cheese Dip, Chocolate Chip cookies, Banana Muffins, Roast Beef Sandwiches, Pears and a variety of candy that struck our fancy.

And it really wasn't all about food. We had fun enjoying the messages from the Prophet and Apostles. We both left with a few ideas of things we wanted to change, and we're excited to do so! Logan slept through most of the sessions, and totally skipped Priesthood! He's such a rebel.

We went down to my parents for Priesthood. Dave  and the boys all went to the session with my Dad and the girls did our annual pizza and $5 DI night. We all get $5 to spend at DI and when we get home we show each other what cool things we found for $5! It was good, and I got a few cute things for Logan.

We've also been preparing for Easter. Dave and I can't remember what we've done for Easter in the past, but this year we decided to do a little dinner at home. I demand that we make deviled eggs, Dave insists on potato salad, and we collectively decided just to get a rotisserie chicken from Costco for the main course. I'll probably add some green beans, rolls and some kind of dessert too, but don't have to decide until I go shopping tomorrow. The only problem I forsee is not busting out the rotisserie chicken when I buy it on Saturday... Those guys are just too tempting!