We thought it was about time to tell the world I'm around 12 weeks or 3 months) pregnant! So that makes me due somewhere around August 7th to the 14th (doing the calculations online it says the 7th, but the Dr has changed my dates for both boys by a week, so I'm expecting that again). We're excited for what I'm hoping is our last baby (unless we both divine inspiration otherwise, I'm done :) ).

I would like it to be a girl, unless it's going to be a high drama girl. Then I'd really prefer a boy. Dave would prefer a boy, but says a girl would be fun for me too. So I guess we're both fine either way. Logan REALLY wants another brother, but he now understands that we don't get to pick, God picks what it is. Dustan is just so excited to be a big brother, I don't think he has a preference. Logan wants to name the baby Marshmallow (boy or girl) and Dustin is fond of Baby Jesus, but if it's a girl Jovie is ok too (the name of a friend's baby which the boys LOVE to death). We also have convinced them Mom and Dad get to pick names, but they can pick a nickname each.

I haven't been in to see the Doctor yet. Let's be honest that was a nightmare. We've been between insurances for a month and still haven't received the COBRA paperwork (by now, what's the point, we get insurance on the 4th). The Doctor's office couldn't give me even an estimate of how much the one visit would cost in cash, and after basically fighting with the receptionist on the phone for 20 minutes I found out the first visit isn't even with the Doctor anyway. It's with the nurse where they give you a pregnancy test and ask you your medical history questions. So the nurse asked me over the phone and I'll wait to take my pregnancy test.

So I haven't been feeling great lately. I'm usually fine until lunch time, then I'm sick for the rest of the day/night. The past week has been better though (I haven't felt sick until Dinner time). That's why I took a month off exercising. I don't really feel like working out when I feel sick. This has also been the push for the freezer meals. Then I don't have to cook when I feel bad.  Dave's been great about cleaning up dinner and getting the boys ready for bed. On the positive side, I've stopped all snacking (which is a great habit to get out of). Also, since I haven't felt like eating much, I've been eating healthier (better make that food I do eat count). 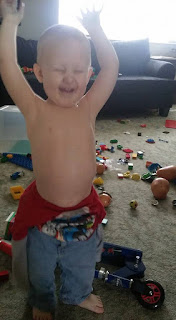 The boys have been great at playing by themselves. I play with them in the morning, but just want to lay on the couch in the afternoons. They make a mess, and we try to clean it up before Dave gets home, but sometimes it just doesn't happen. When they need some extra attention they come snuggle with  me and we read books. 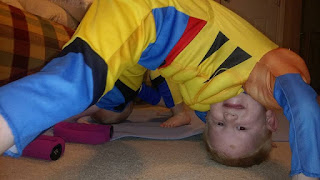 We've been great at exercising this week too! I keep trying to wake up before the boys are awake and get it done without an audience, but it hasn't happened yet. And it's good for the boys to join in. I remember my mom working out when I was little. Looking back, I'm sure she had concerns about her weight from time to time (she had 5 kids and that takes a toll on your body), but I never remember her stressing about being fat or anything like that. All I remember is she worked out so she could be healthy. 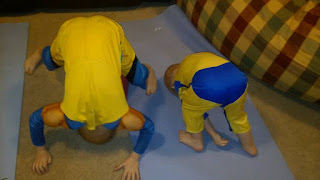 That's what I want the boys to remember too. So when they ask why I'm exercising if it's so hard, I tell them we're building strong muscles or trying to get healthy. So now Dustin insists that if we're working out he needs on his Wolverine costume. They like when I do Yoga or Palates, but don't love the cardio or weights exercises.
Posted by Amy at 9:43 AM 2 comments:

The last two weeks were all about getting back to normal, or trying to. We were sick again last week (Dave is still recovering). It only lasted 3 or 4 days for me, but I'm still tired all the time. But then again, that could be from many different things.

Dustin started the terrible twos this month. It started with him refusing to sleep in his bed/bedroom. We have a no kids in our bed rule, so it has made for a rough 3 weeks. He would cry and refuse to go to sleep for hours (one night from 8 to 10:45). So we moved him out of the boys bedroom back into the nursery (on a mattress on the ground) so at least Logan could get to sleep. He was also waking up several times a night refusing to go back to bed. Long story short, he's now back in his bed and sleeping without throwing a fit. But unfortunately the fits/tantrums have remained.

With the New Year I've recommitted myself to a few of my personal goals. With being sick for most of December I haven't been exercising as much as I need too, so I've kicked my self back into a routine. I've been doing it more gradual, so it's more obtainable, but I'm glad to be more healthy again.

Also the cooking has been lacking lately, so I've tried to cook more involved meals. Alison mentioned Once a Month Meals (paying a subscription to get menues and shopping lists for a month worth of dinners that you make and freeze). I loved the idea, so I got online to check it out. It turns out they'll give you 5 recipes/shopping lists free to try it out. So I signed up for the 5 free Traditional menues (Honey Pecan Porkchops, Mongolian Beef, Pesto Stuffed Chicken, Poppy Seed Chicken, & Ham & Ranch Potatoes) and Dave signed up for the 5 free Diet menues (Shrimp & Orzo Bake, CheeseburgerLettuce Wraps, Raspberry Glazed Porkchops, Tomato & Feta Stuffed Chicken, Crispy Cheddar Chicken). This week I cooked the Traditional menue and we'll see how they taste.

So far my opinion is they prepare a lot more meat than we typically eat (I decreased the portion sizes or plan to make them last two meals). Also, these recipes don't include the sides (yesterday we tried Poppy Seed Chicken but I had to make pasta and veggies to go with it). So it does make dinner a lot easier, but it's not completely done. Not a complaint, just an observation.

My friend Tenille found a Hawaiian Quilting class next month and I'm so excited to go with her to it! When we went to Hawaii I fell in love with their quilt style, and I'm excited to try it out. I really hope it's something that I can do (it's a TON of applique).
Posted by Amy at 5:27 PM No comments: 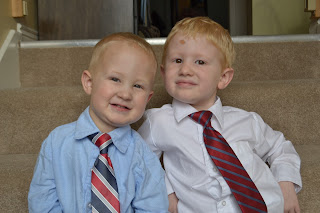 I don't know where the time went! We had a great, long break. Dave's last day at Babcock Design Group was Wednesday the 23rd (although with all his accumulated vacation time, he got paid until Jan 4th). And his first day at IBI Group Inc. is today! He's excited and nervous to start a new career and job, but I know he's going to do great. 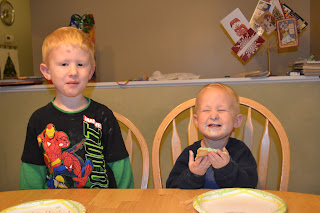 So with the week and a half off, we had lots of time for lots of fun! The Monday before Christmas we invited Dave's parents over to decorate sugar cookies with us. It's something we do every year, and the boys just love it! Since we'd been sick, I forgot to go out and buy Christmas sprinkles... so we ended up with left over Valentines and Easter sprinkles. But the boys didn't seem to mind. 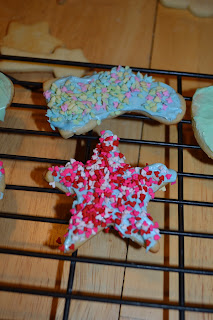 Thursday evening my parents made it into town (after a 12 hour drive that should have taken them 6). We talked and visited and accidentally opened all of Grandma Sheila & Papa Mike's gifts before bed time. Then Dave and I made sure everything was ready for Santa to come and we went to sleep too. The night was less than relaxing... The boys were SOOOOO excited for Christmas that eventually Dave ended sleeping with Dustin in our bed and I took Dustin's bottom bunk. Every half hour or so Logan would ask "is it Christmas yet?!?" and I would tell him no. He would insist he had to go potty again.

Finally 7:00 rolled around and the boys got to wake up and open gifts. They were so excited about everything! They would open a gift, play a little, open the next and just had a grand time. We ate waffles & sausage for breakfast, and my parents headed out to visit other grand kids. In the afternoon we headed over to Dave's parents house to visit and play.

The highlight of Saturday was going to my brother's house and getting to play and visit! The boys had so much fun with their cousins and Dave and I enjoyed talking and playing games. It was good to catch up. The kids didn't want to leave they had so much fun.

Sunday Grandma Sheila & Papa Mike got to go to church with us. Later that evening we got to have dinner with the Poulson family. It was fun to see them, catch up, and the boys played some games too.

Monday my parents left and the rest of the week seemed to pass by in a blur. Somewhere in there we went sledding a few times, we went to the library, everyone got hair cuts, went to the temple, saw the latest Star Wars, made slime (for us and for Logan's friend Abby), and went to lunch at Outback. We had a good relaxing break. 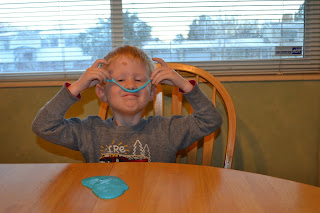 Going back to work has been hard on all of us! The boys and I have been cleaning the house, doing laundry, grocery shopping, and pinning some pants to hem for a friend, and starting chopping veggies for dinner. Tomorrow Logan goes back to pre-school and we'll be fully back in the swing of things. 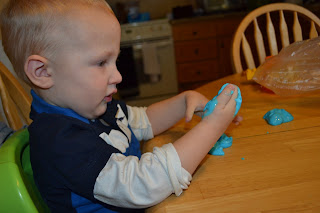