In Which We Fight Over Fashion 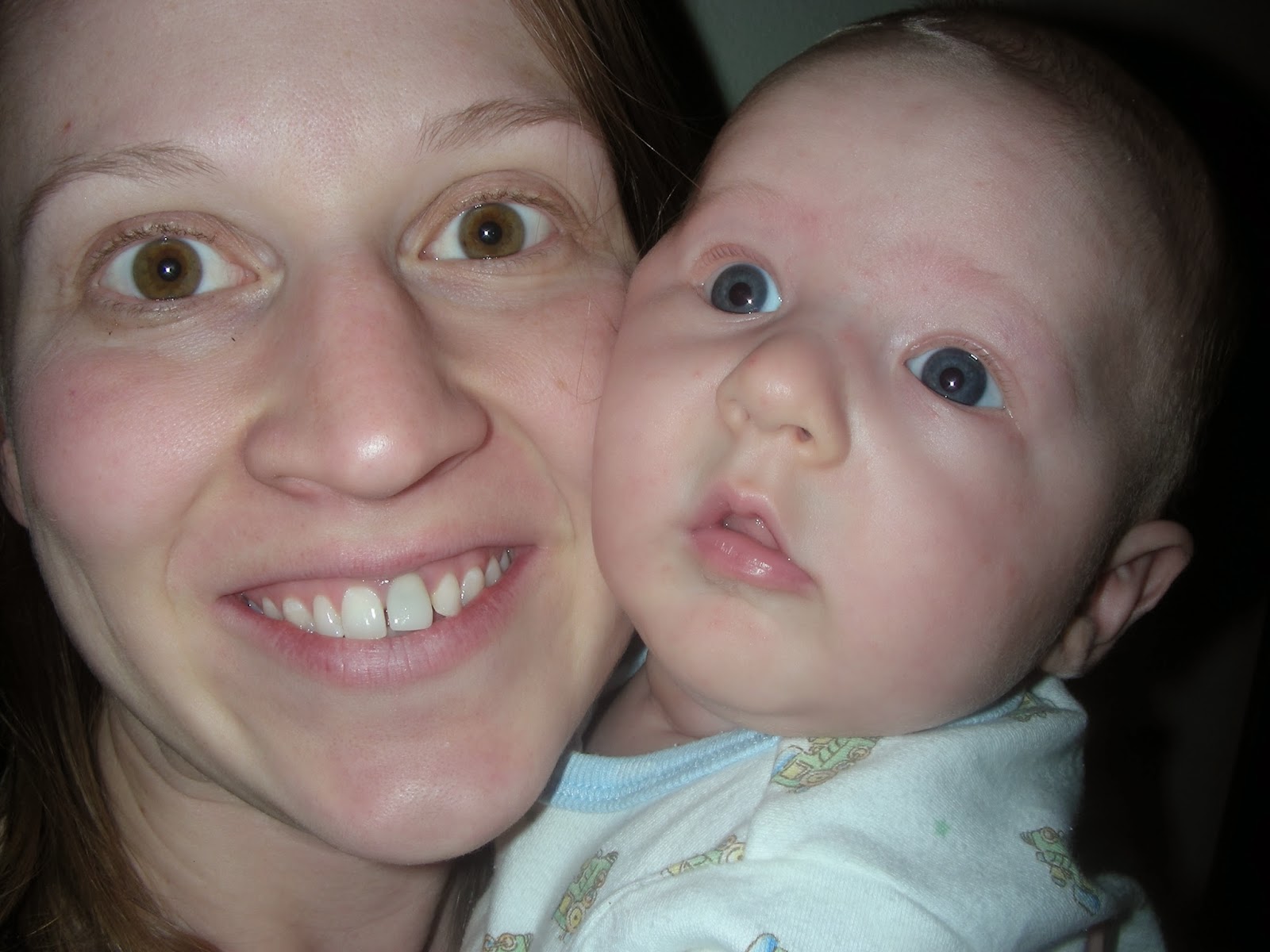 Dustin's been growing like a weed lately! Logan was in Newborn clothes until he was 3 months, and Dustin is almost out of his 0 - 3 month clothes (and he's only 2 months!). He had his 2 month Dr appointment Friday and he is in the 47th percentile for height and 31st percentile for weight. That's huge considering he was in the 12th percentile when he was born!

He's such a social little guy. He will laugh, smile and "talk" to you. Logan just loves it; he will tell me "Mom! Dustin's smiling/talking to me!" He hates tummy time, but he can hold his head up, props himself up on his arms with his torso raised, and accidentally rolls over. 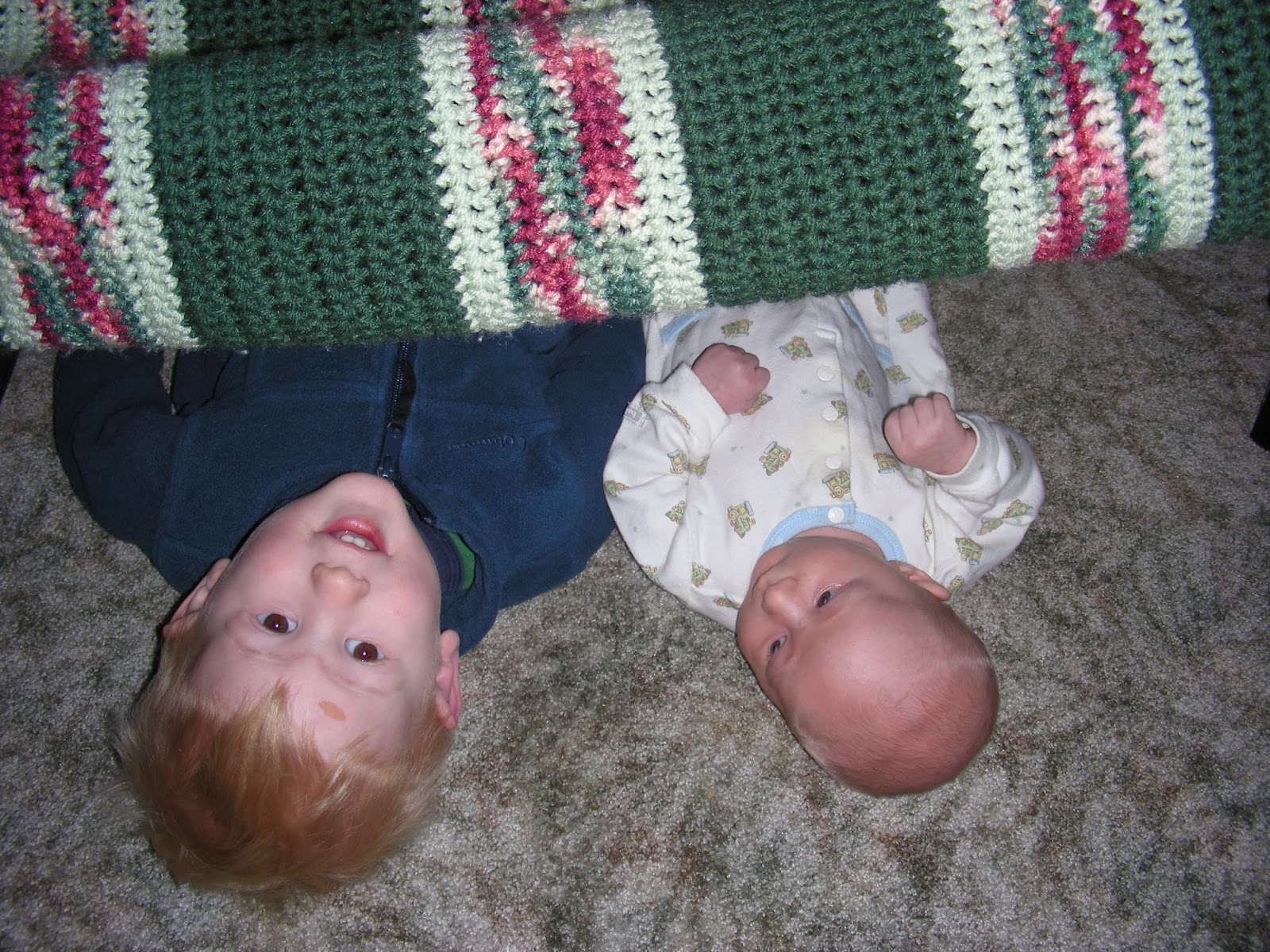 Logan loves Dustin to death! He wants to do everything with his little brother. He even calls him "my Dustin". Above he built a fort to play with his brother in. He scoots over to make room for his brother and shares his cars with him. 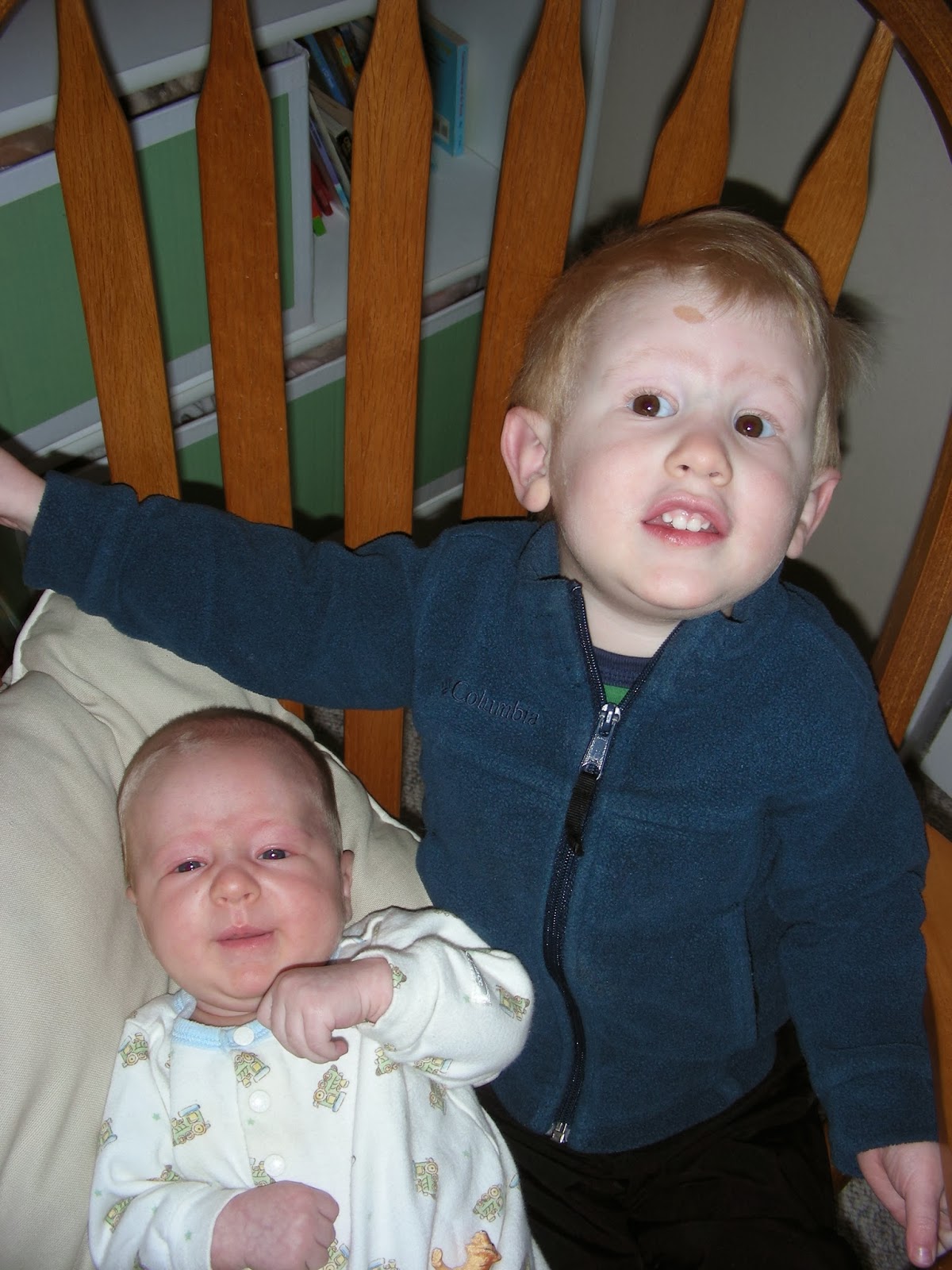 He also wants to be involved in Dustin's many naps. I usually swaddle Dustin and sing him a song before he goes to sleep. Now Logan wants to rock Dustin in the rocking chair while singing (either I am a Child of God, or the ABC song). When it's time to wake him up Logan will say "Come on mommy, let's wake up Dustin with kisses." And I hold him over the crib so he can kiss his brother awake.

Dave also had some exciting news this week. He's been talking to the company OC Tanner for several months about a potential job or doing some after hours contracting work. This week he met with them to discuss his first contracting project. He said it went well, and he has another meeting with them Friday to discuss the direction he plans to take the project in. We're so excited! He really wants to work for this company eventually.

Logan's and I have been butting heads lately over his fashion sense. I don't mind him wearing his red and navy Lightning McQueen shirt with his turquoise snow man socks and his bright blue, green, orange, red and yellow dinosaur pajama pants. It's when he insists on wearing the Lightning McQueen shirt for the 4th day in a row that we have problems! It's not even his size. I bought it for this summer in a 3T during a sale, and he saw it... needless to say the shirt didn't make it into storage. Oh well, as long as we're not going anywhere I give in and let him wear it.
Posted by Amy at 10:16 AM 1 comment:

It's been a fun week for us! Last Friday we got to go to the temple. It was our first temple date since Dustin was born. Logan and Dustin got to have fun with Grandma Linda and Papa Bill. We did sealings and Dave was asked to witness a live sealing afterwords. It was in spanish, so I only caught some of what was being said, but it didn't matter. The spirit was so strong and I was glad we got to help out.

Saturday we did some work around the house. I cleaned and prepped the house for Sunday while Dave petered around in the basement. He removed the basement bathroom's shower doors. He said it was easier than he thought it would be, and after installing a new curtain rod, he called it a day.

Sunday night we had a family from the ward over for dinner. They moved in a street down from us, and have a son Dustin's age. It was fun to get to know them better and was nice to have an excuse to make a fancy dinner. I love to cook, but with the two boys haven't had a lot of time for extensive cooking. We spend more of our time playing and making a mess of the house.

Monday Dave had off of work so we got to spend more time together. I woke up early to get our Walmart shopping done before the boys woke up. When I got back we enjoyed breakfast together and some play time. That night we made some orange chicken and broccoli over rice noodles for dinner. Logan has been far more brave about trying new foods lately, so he ate this with us! Well, not the noodles, but the chicken and broccoli. It was tasty and I look forward to the leftovers tonight.

We ventured out to Barnes and Noble for FHE. Logan loves to go to "the train store" and play with the Thomas trains while Dave and I take turns browsing the books. We had tons of fun and I have a list of books I now want to read.
Posted by Amy at 3:47 PM 2 comments:

I swear, life with two little people is always busy. Or that's what it feels like since we had Dustin. Maybe it's because we had him in the middle of the holidays. The past week was good but full. We had something going on every day last week.

Wednesday I got to visit with my friend DeLenna (she was in town from Indiana). We met at my parents house (b/c. it was halfway between her parents and my house). Logan and De's daughter Taylor played and had fun, and De and I got to catch up. It was like old times. De's husband Brandon is graduating in a year and a half with his PHD, and we're hoping they will move to Utah then. He's currently pursuing an opportunity in St. George, so hopefully!

Friday I had my 6 week checkup doctor's appointment and everything is looking good! So I'm back on the exercise bike and hoping to loose the rest of my baby weight (7 lbs to go). With Logan, I couldn't loose the last 5 lbs until he started eating solids, so my goal is to loose it in the next 6 months. We'll see how it goes.

Saturday morning I had my monthly quilting class. This year the teacher has given us crazy amounts of squares to complete! Last month it took me pretty much all month to finish, and this month we have 40 squares. Sigh... with a new baby that sounds like a lot. I'm still napping at the boys nap time (curse night time feeding), so I told Dave I needed some working nights this month.

Yesterday we went to Dave's mom's church to pin a queen size quilt! She's only tied quilts before, so I taught her how to use safety pins and explained how to machine quilt it. Dave's sister Lucinda joined us, and we got everything pinned in 3 hours. Logan was great playing on his own, and Dustin was pretty good (thanks to the baby back pack I brought). It was nice to get to catch up. We did a lot of talking over the three hours!

Today I'm calling a catch up day. We're just going to hang out around the house and clean up, cook, and relax. Maybe we'll make it over to the school to play on the slides, but that's as ambitious as I'm getting! Logan keeps asking for a movie, so maybe we'll do that too.
Posted by Amy at 11:30 AM 2 comments:

We had a fun New Years week! Dave had a half day Tuesday and no work Wednesday, so it was like we had two mini weeks. Tuesday night we were invited over to a friend in the ward's house for snacks and games. We brought some Cilantro Lime Hummus, Wheat Thins, and Carrots. It was fun to chat and play a few games with them and a few other families in the ward.

Wednesday we did some work around the house. I did some deep cleaning and Dave finished some projects he's been wanting to fix for a while now (patch and touch up the holes in the basement, fix the front door, etc). It was a quiet day, but just what we needed. 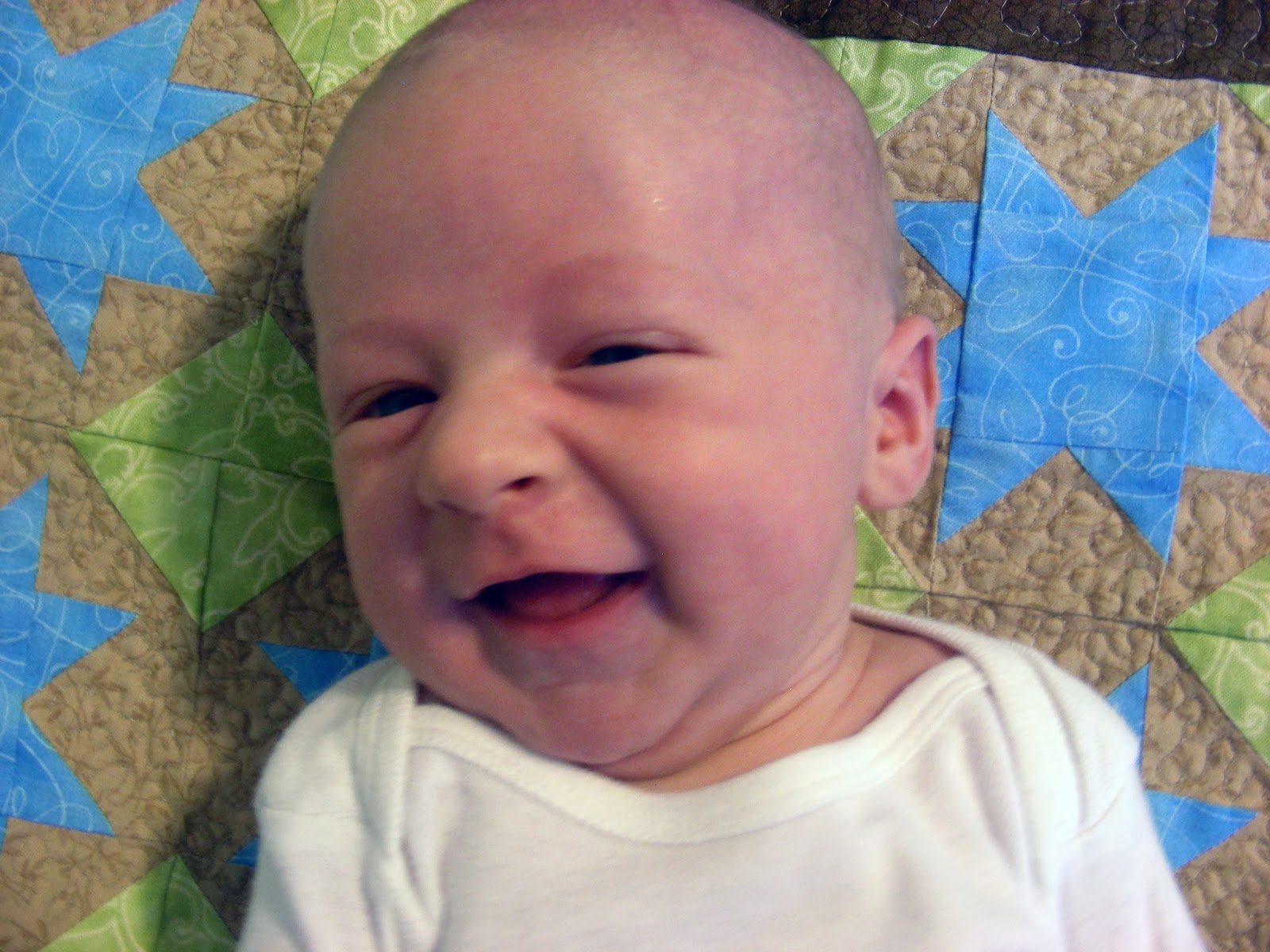 Thursday Dave was back at work and Dustin was having a playful morning, so I did a photo shoot. He was talking cooing and smiling. 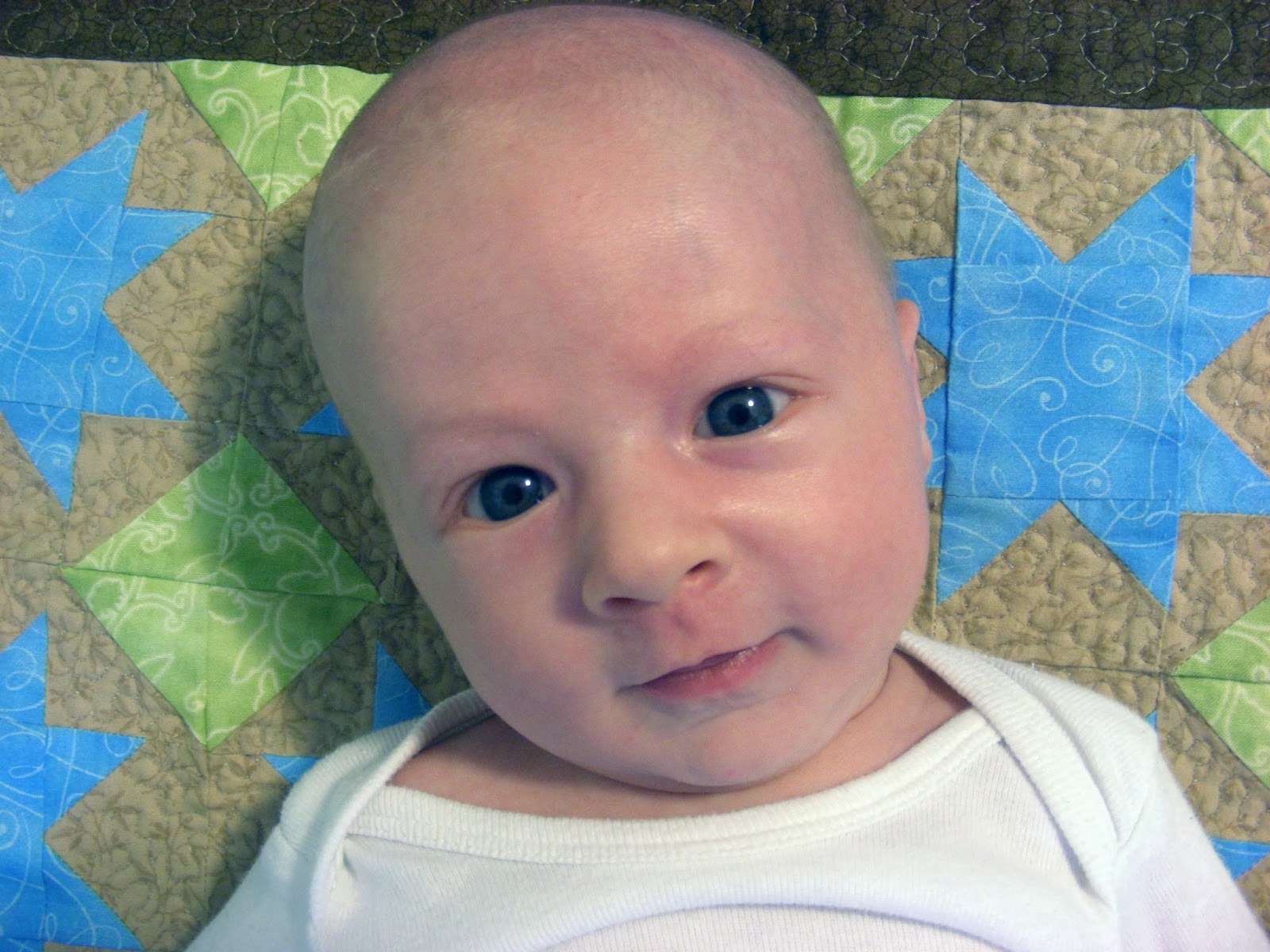 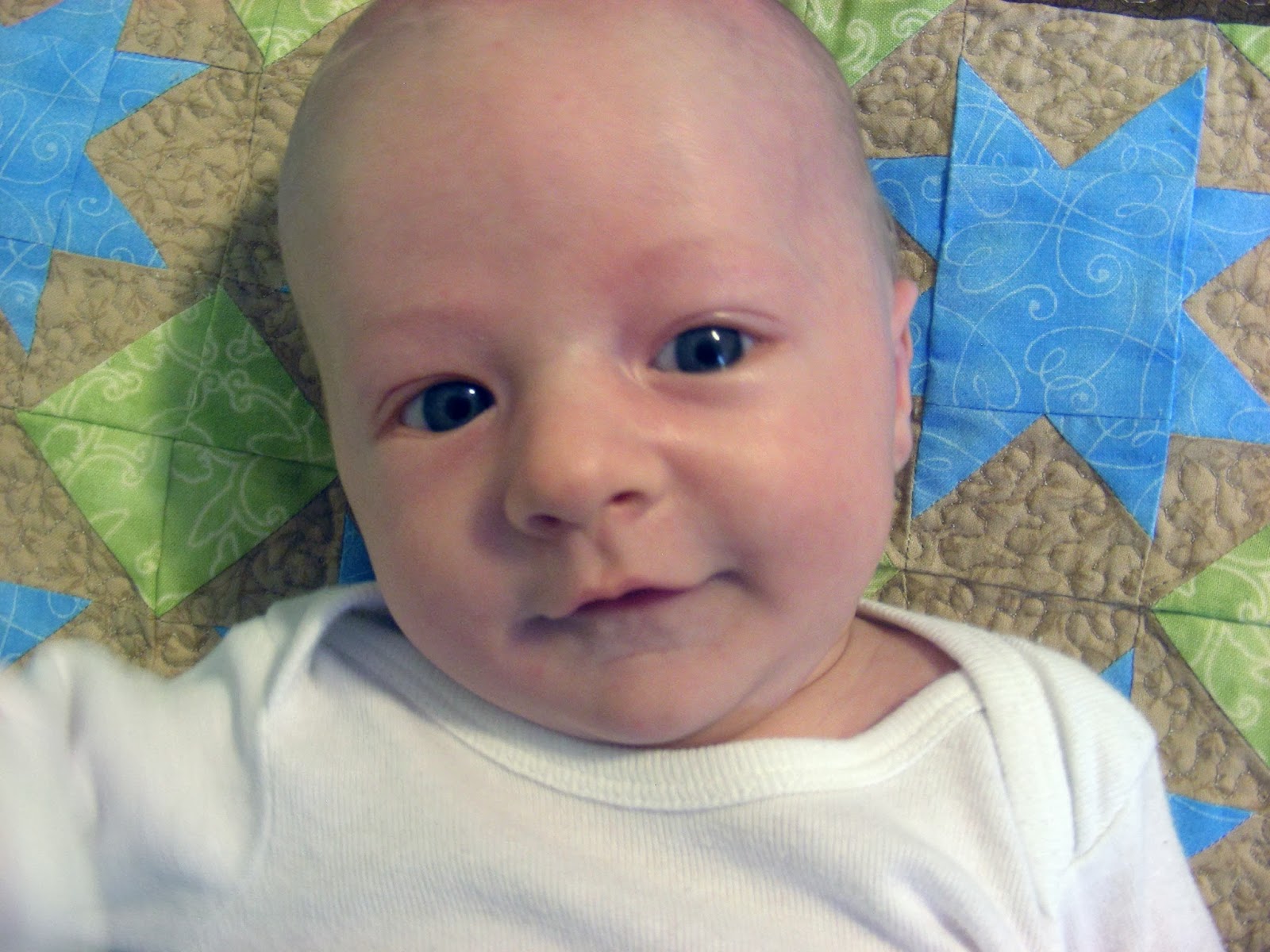 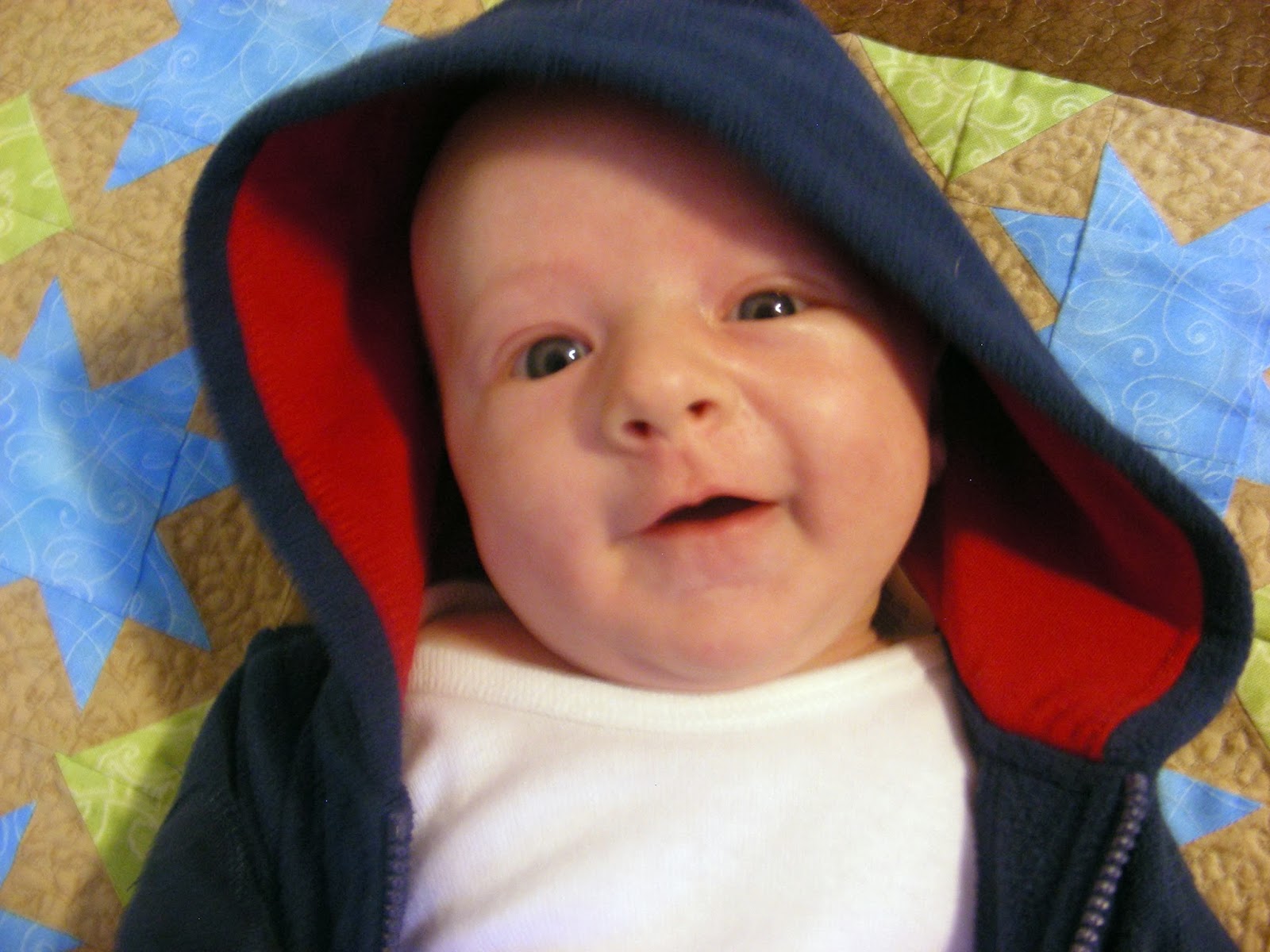 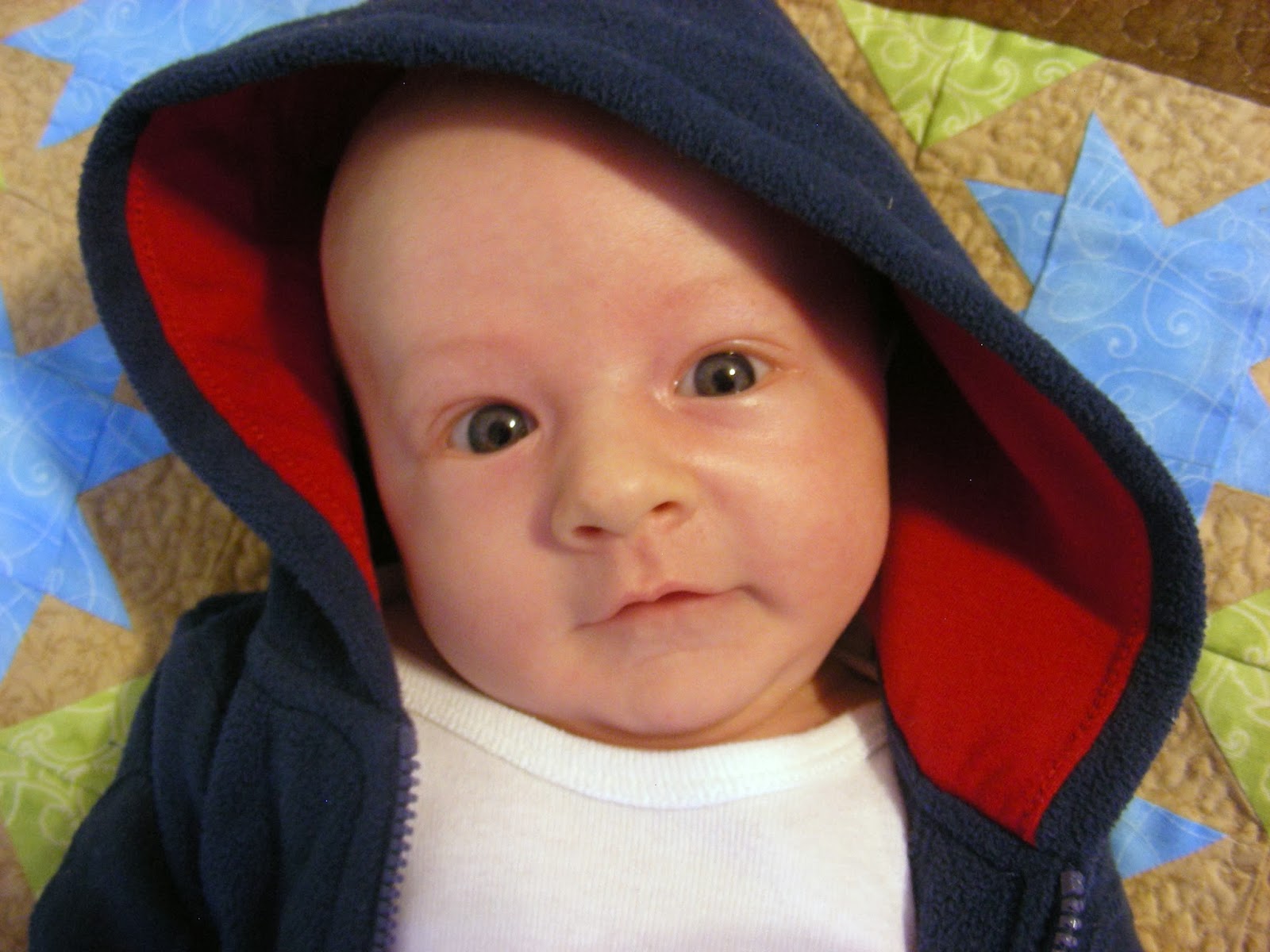 Logan thought it was hilarious that I was climbing in the crib to get good pictures of Dustin. So I took the boys into the living room to take a few shots of them together. 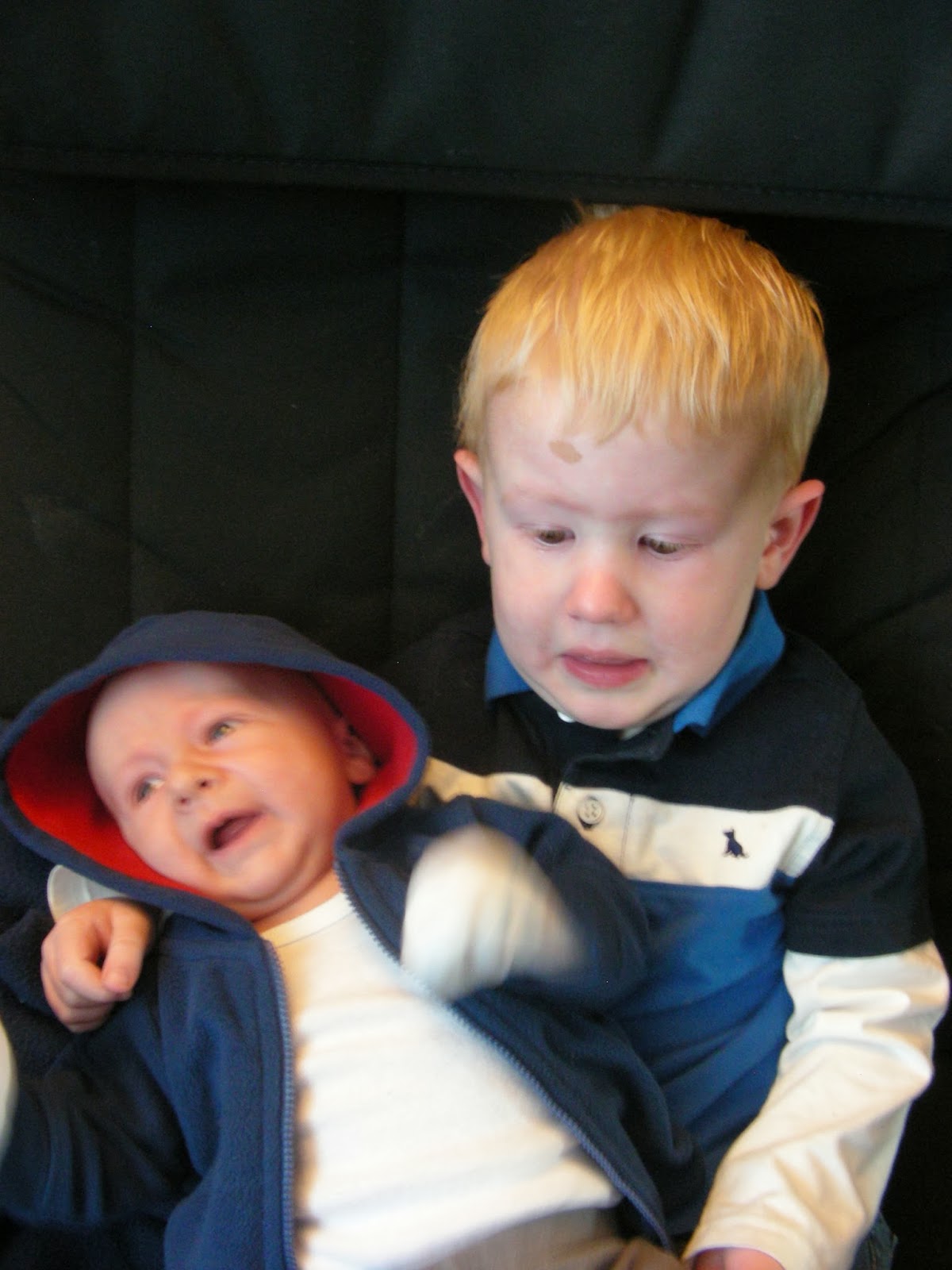 Just before the first picture Dustin punched Logan in the eye resulting in major tears from both boys. They didn't calm down enough to get a good picture, so all we got was this action shot (see D's hand retreating and Logan about to bust out the tears). It was sad, but a little funny! 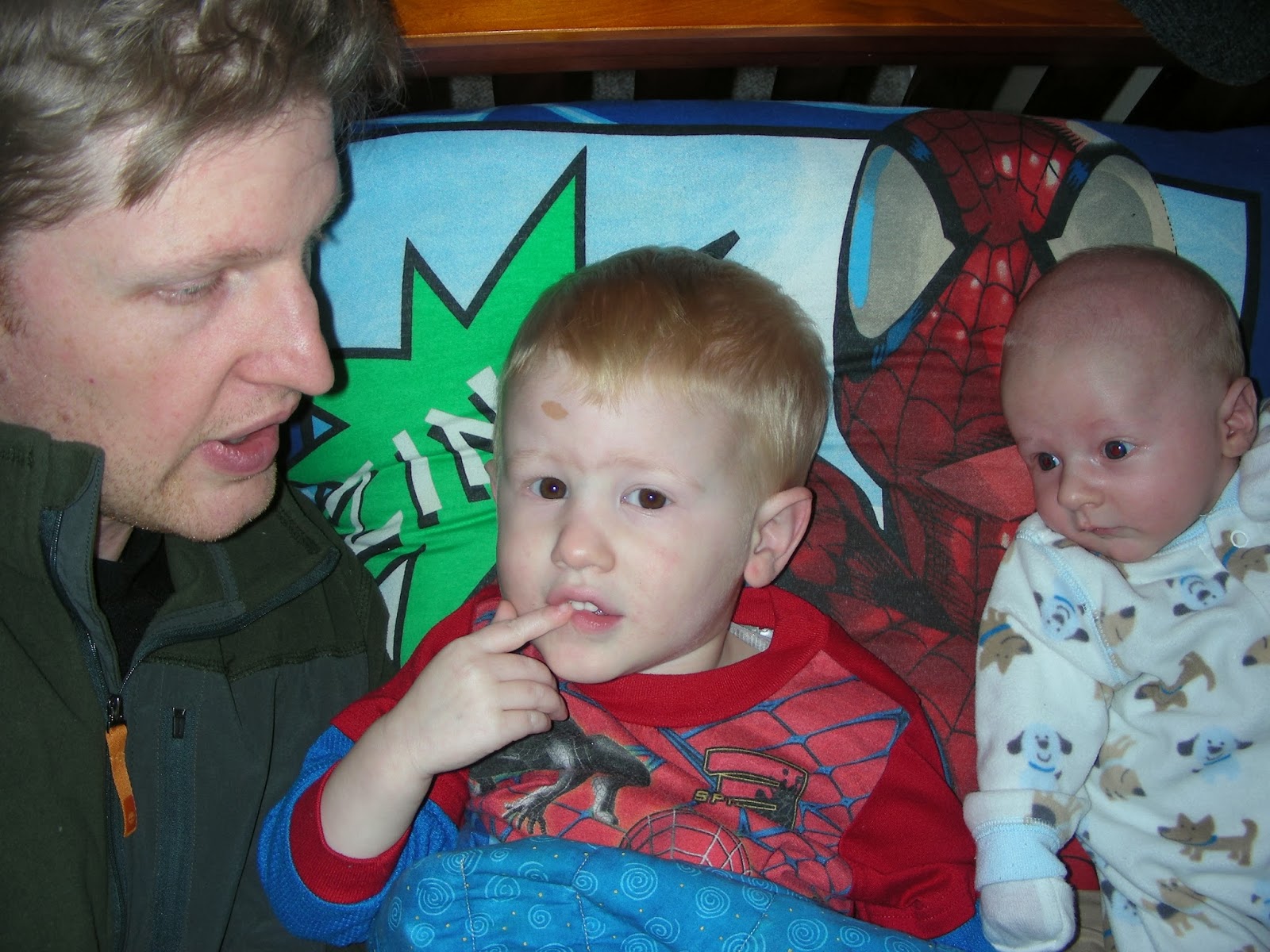 Saturday as Dave was reading Logan his bed time stories and Logan requested Dustin join them. Logan kept giving Dustin kisses and snuggling close to him. It was too cute.

Sunday we went to Dave's sister Lucinda's baby's blessing. It was good to be able to be there and enjoy the blessing with the family. Logan missed his nap, so he's been ornery ever since, but hopefully he'll catch up on his sleep tonight!

This morning he cried for about an hour and a half switching between "I need some milk", "I want to turn on the light" and "I don't want to go to bed" (which I didn't even suggest, he just knew he was tired). It was a rough morning, so we did some baking to take our mind off how grumpy Logan was without sleep. Hopefully the enchilada soup, brownies, pb granola, and Pumpkin Breakfast cookies I made will help me get through the afternoon!
Posted by Amy at 2:26 PM 2 comments: