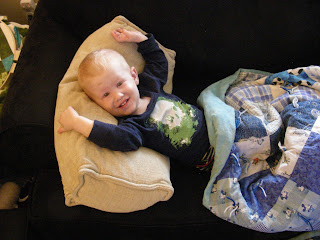 It's been so busy around our house lately! Tons of changes, but all good. As illustrated by the above picture, Logan's learned to climb on the couch. He will pull a blanket over, throw a pillow in place, snuggle up, and demand "MOVIE, NEMO!" But we don't let him watch TV, so he's regularly disappointed. But cute.

First big change, we sold my car! I've had it for 7 years, and it just had it's 13th birthday, so we expected it to die any day now. We posted the car on KSL classified and it was sold within a half hour for $500 over the Bluebook listing! I was totally unprepared for it to move so fast. The guy buying it just wanted it for a commuter car. He already has his man Jeep that he loves, but can't afford daily gas. So a win for everyone.

We're now a one car family for a while. It's been weird to get used to, but we're hoping to save up for a Prius by saving money on the insurance, maintenance, gas, etc. I ordered a second bike trailer hitch to go on my bike, so soon I'll be driving Logan around in bike style.

We also decided to get our walls insulated for part of our tax return, and that happened this week. With the rebates and tax returns we will end up paying $1,300 (oh, and I had a 20% off coupon). It's spring, so I'm shocked to say I totally can feel a difference already! Last night I had to switch out blankets (winter for summer). That doesn't usually happen until May or June. Also, the walls don't feel cold to the touch any more and I don't think the heater has turned on once today!

Speaking of tons of change... I started doing daycare for a 16 month old boy this week too. His name is Max, and he's such a mellow guy. His dad got surprise deployed, and his mom had to get a part time job, so he's with us from 8:30 to 5 three days a week.

Logan already just loves him. They roll the ball back and forth to each other, love sliding down the slide together at the park, and mostly are good at sharing their toys. They even share food at lunch time. Max has a comfort blanket, and Logan is in awe of that idea. He even started wanting a blanket for the first day, but got bored of it already. When Max cries, Logan runs and gets the blanket and says "Max's Special". If it doesn't stop Max from crying, Logan will cry in sympathy.

I found a used double stroller on KSL for $25, and we'll pick that up this afternoon when Dave gets home. That will make us more mobile, which is important for Spring! It will be eventually be helpful when we have kid number 2 as well.

Other than that (because I need more going on in our lives???) I've been working on refinishing the cover to a swinging chair I found free last year. It's going to look great, and I can't wait to try it out, hopefully this weekend. I just have to get some serious hand sewing in and it will be done.
Posted by Amy at 12:41 PM No comments: 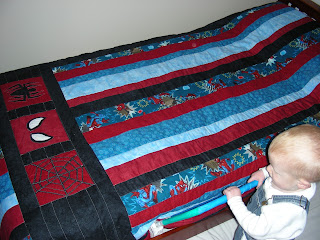 It's done! I finished sewing on the binding today just before lunch, so we got this bad boy on his bed in time for nap. Logan was so excited to have it on the bed, it was hard to actually make the bed and impossible to get a picture without him in it. 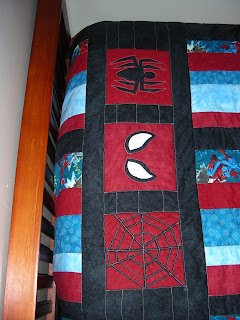 This was the hardest part of the quilt. The accent squares that went on the foot of the bed. The two end ones are paper pieced (I had to create the patterns myself), and the center one is hand appliqued on. They turned out better than I expected, and I love how it gives a focal point for the blanket. Now I just need to make Logan a pillow or two to go at the top. 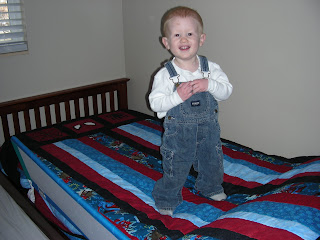 He just thought this was the best thing ever! He jumped up and down on his new blanket, snuggled into it, and kept throwing his toys and blankets on the bed to play with.

Logan got his first hair cut last weekend. He did really well! I showed him the buzzers while they were on, then I worked over the top. He didn't like when I did the back and sides, because he couldn't see what I was doing anymore. But no tears were shed, so I'll consider it a success. He looks a lot better now with short sides and a little longer top.

Other than that, it's been a pretty casual week. Just baking, trying to finish up with sewing, and taking it easy!

Easter Prep and the Pantry 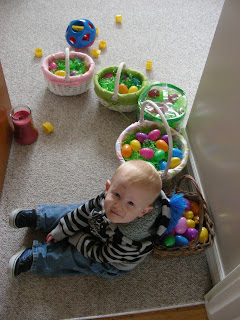 We decorated for Easter and Logan has had the time of his life playing with everything. He collects all the baskets in one place before destroying them! He made such a mess with the fake grass that I gave up and put the grass away. So now Logan's having fun playing with the baskets and the eggs.

We're excited for Easter, and I think Logan will enjoy it this year too. What a surprise it will be to find stuff in his eggs. 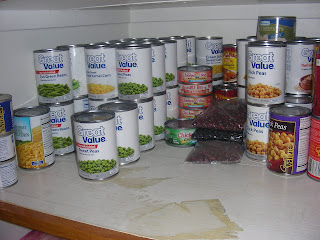 I've also been working on the pantry lately. This is what it looked like prior to my re-organization. We have tons of cans of veggies, some fruit, and beans. Lots of beans. So I enlisted the ward and family to help me collect some soda can boxes to make into can rotating systems. They turned out pretty cute! 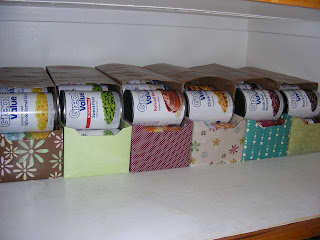 I have two more to make, and I'm so excited to have the whole pantry organized and cleaned up! 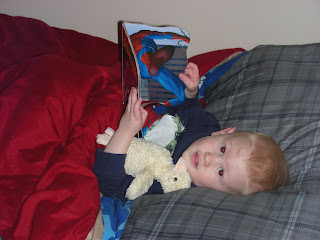 Logan's been learning so much lately! Last week he started to refer to himself as "Nogan". When he wants something we have he points to himself exclaiming "Nogan"! He now will say a lot of our prayers. He says "Father", then will list all the things he remembers from the day. Most frequent are his monkey, walks, and Mom & Dad.

Last week we really enjoyed the 70 degree weather. We went on walks, bike rides, fed the ducks and just relaxed out in the yard. Logan had so much fun rolling balls down the driveway, filling his big truck's bed up with pine cones, and driving his Tonka truck down the sidewalk. It took us an hour to walk up and down the street, but he had so much fun it was worth it.
Posted by Amy at 2:37 PM 2 comments: 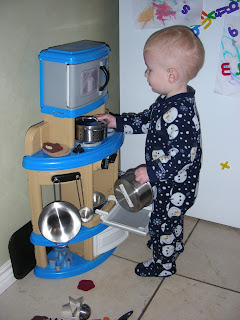 Life never slows down. Never! Last weekend we spent doing our taxes. It's always a nightmare to get done, but we always get money back, so it's worth the work. This year we bought Logan a toy kitchen to go with his pots as a bribe to stay out of our hair. Don't worry, we got it at the thrift store for $2, so it didn't break the bank or anything. It kept him busy for at least an hour, so it was worth it!

We're now itching to get the checks so we can start spending the money! Dave really wants to see how much changing our car port into a garage will cost, and I've been looking into insulating our house. Maybe we can do both. With rebates & government incentives the insulating process shouldn't cost too much.

In other news, we took Logan swimming for FHE at the Murray city kids pool. He just loved splashing around with the other kids! He wanted us to be with him at all times, but he had tons of fun.

Thursday night Dave ended up working late, so I took Logan to the McDonalds by our Walmart. It has a play place, so we got ice cream and played for an hour and a half. Best $1.70 I ever spent. Logan didn't want his ice cream, he just wanted to go play with the big kids. He mad friends and had so much fun sliding down the slides and crawling through the tunnels.

I also started a gluten free recipe website since I figured not everyone wants gluten free recipes. So if you or anyone you know is interested it's called Delectably Gluten Free. If you click through to the site, I have it organized at the top with tabs (Desserts, Breads, Entrees, Breakfast... etc). When I have more recipes you can click on the tab and will find a pic and a link to each recipe. So if you're looking for a dessert you'll have 8 to choose from. That's the idea any way.

I plan to do a new recipe every Tuesday. Once a week doesn't sound like too much of a commitment to me. Try the chocolate chip cookie recipe. I'm in love with those!
Posted by Amy at 2:08 PM No comments: