Wednesday was Dustin's first birthday! We had so much fun celebrating with him. Well, the celebration began on Tuesday. Dave has Scouts on Wednesdays, so even though Dave planned to skip scouts, we thought we'd make sure we got to celebrate, so we had cupcakes after dinner. 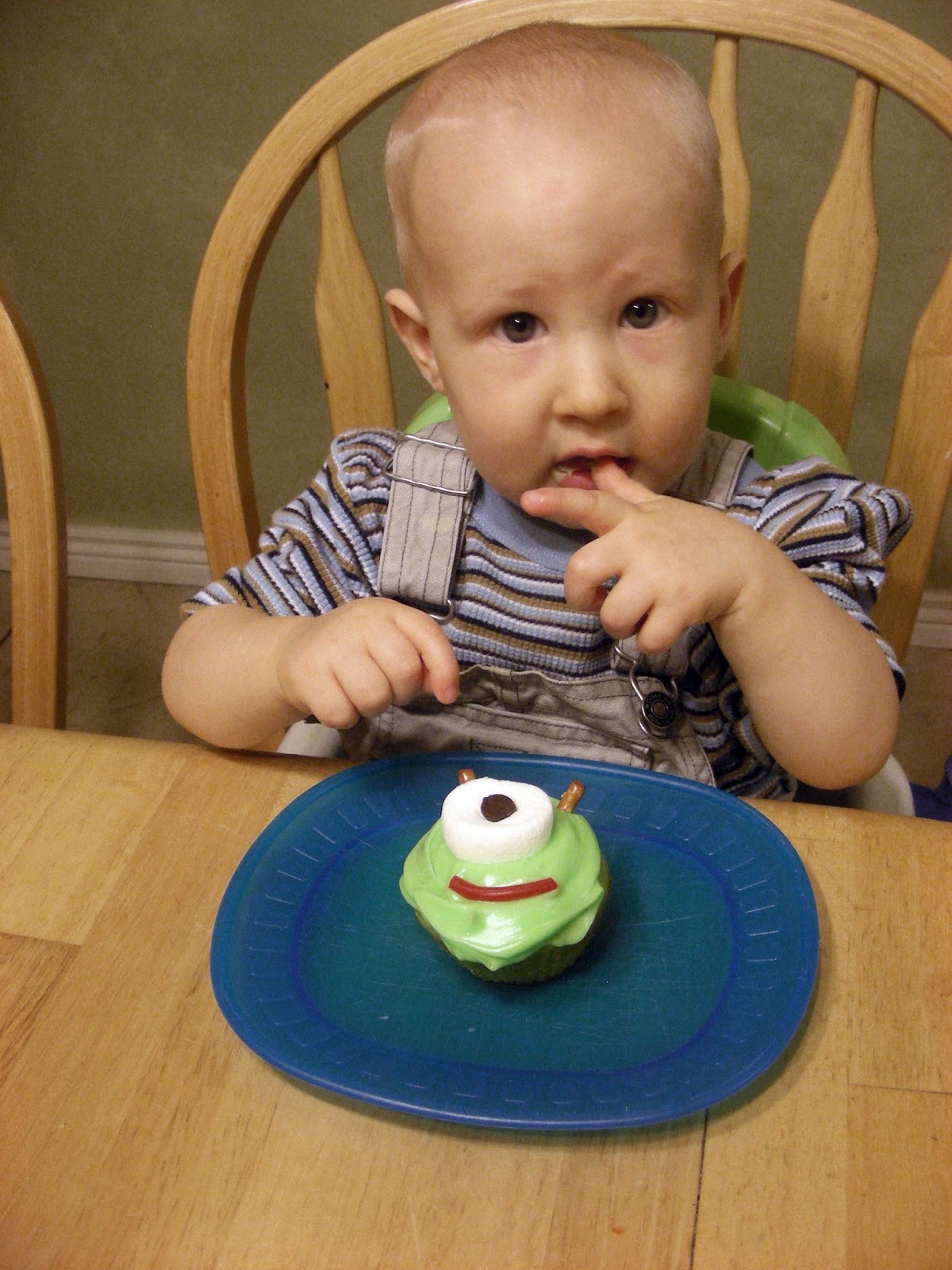 Dustin got "Mike Wizowski" cupcakes (from Monster's Inc.). Logan helped me mix the batter during nap time and I quickly frosted them after dinner.  At first Dustin just dipped his finger in the frosting and licked it off. 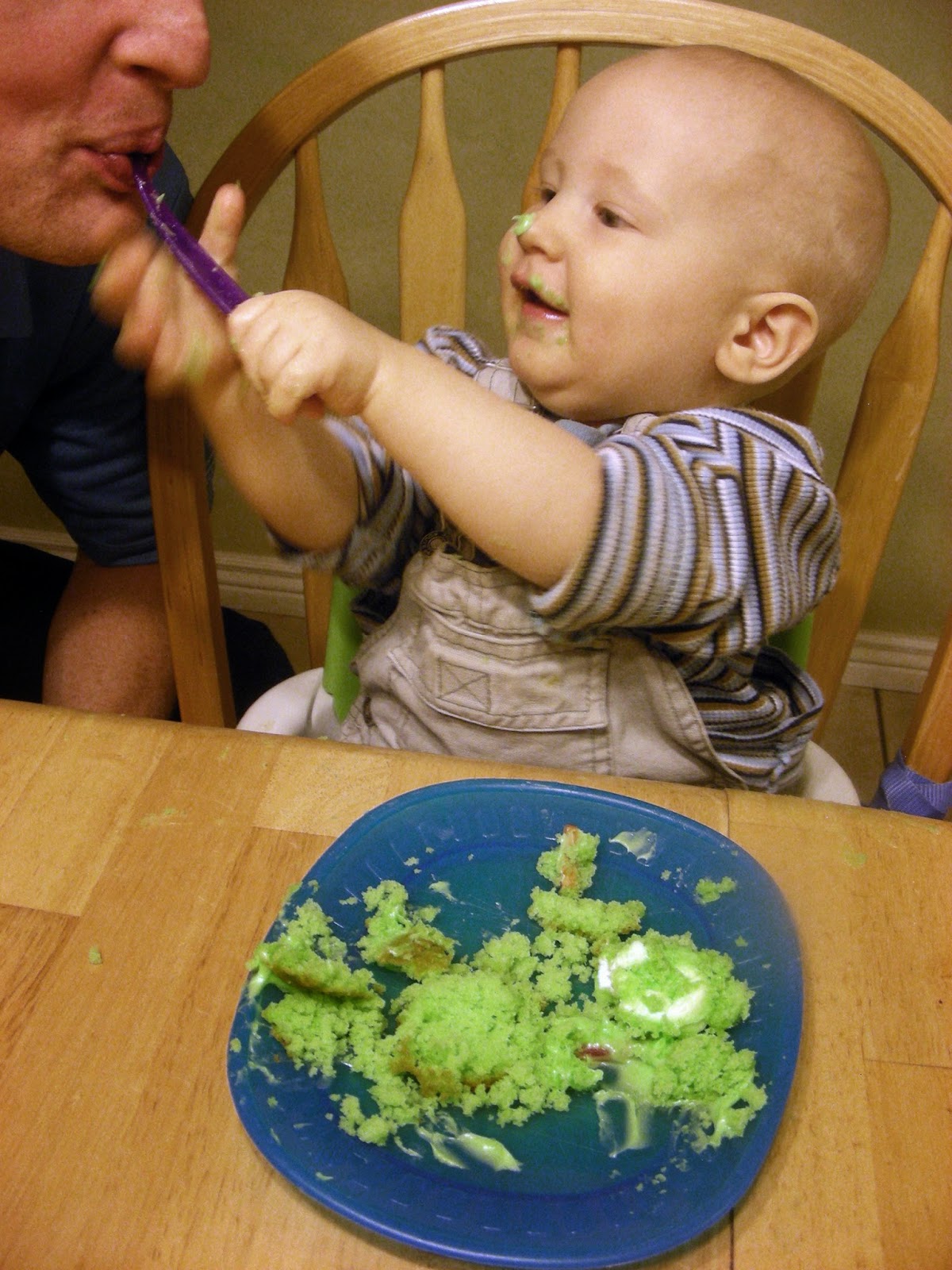 Given a spoon, he quickly destroyed enjoyed the cake, frosting, and toppings! 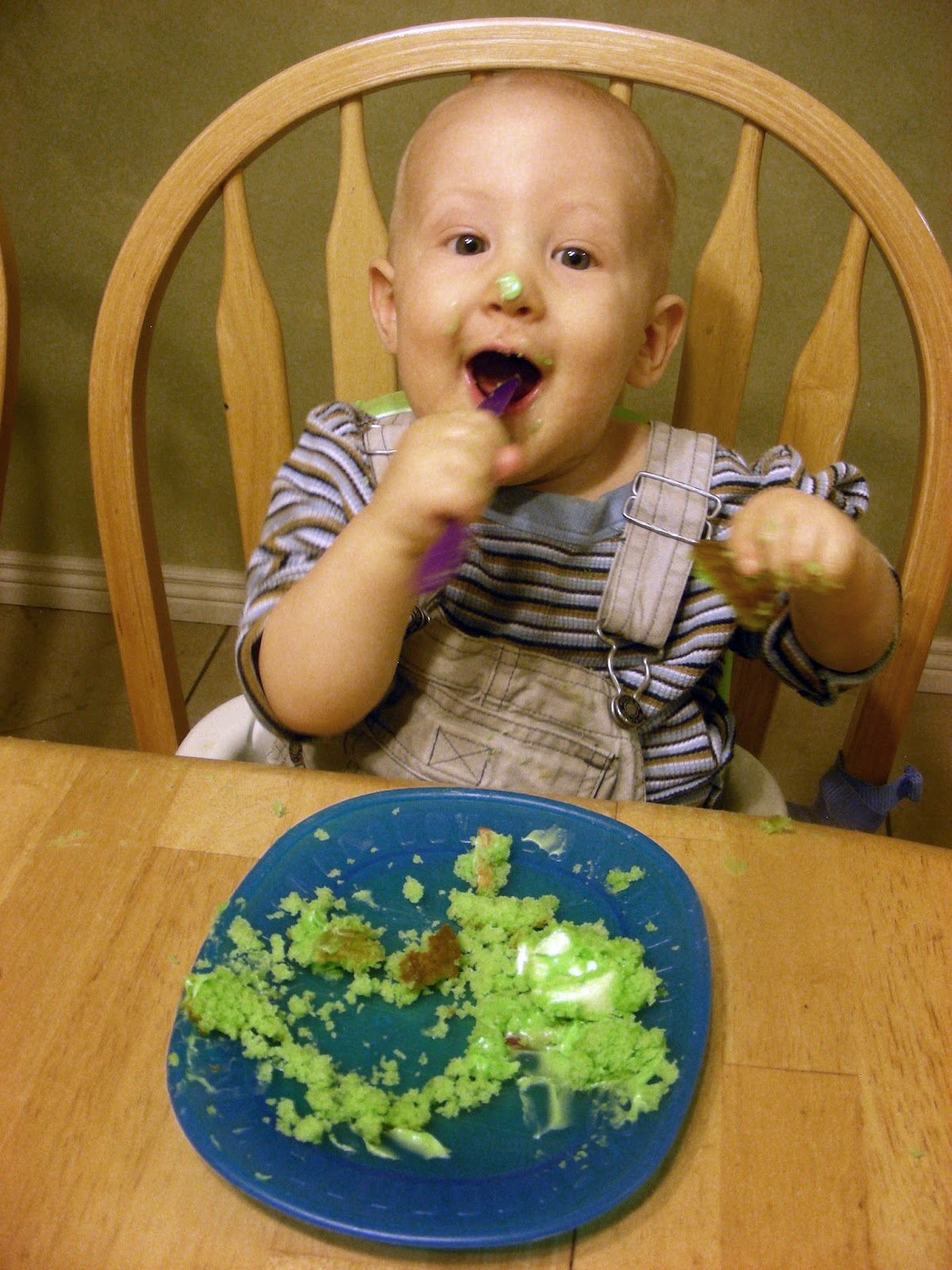 He thought he was getting away with murder feeding himself! And the floor was a MESS after we were done (and neon green crumbs show up a lot more than regular crumbs). 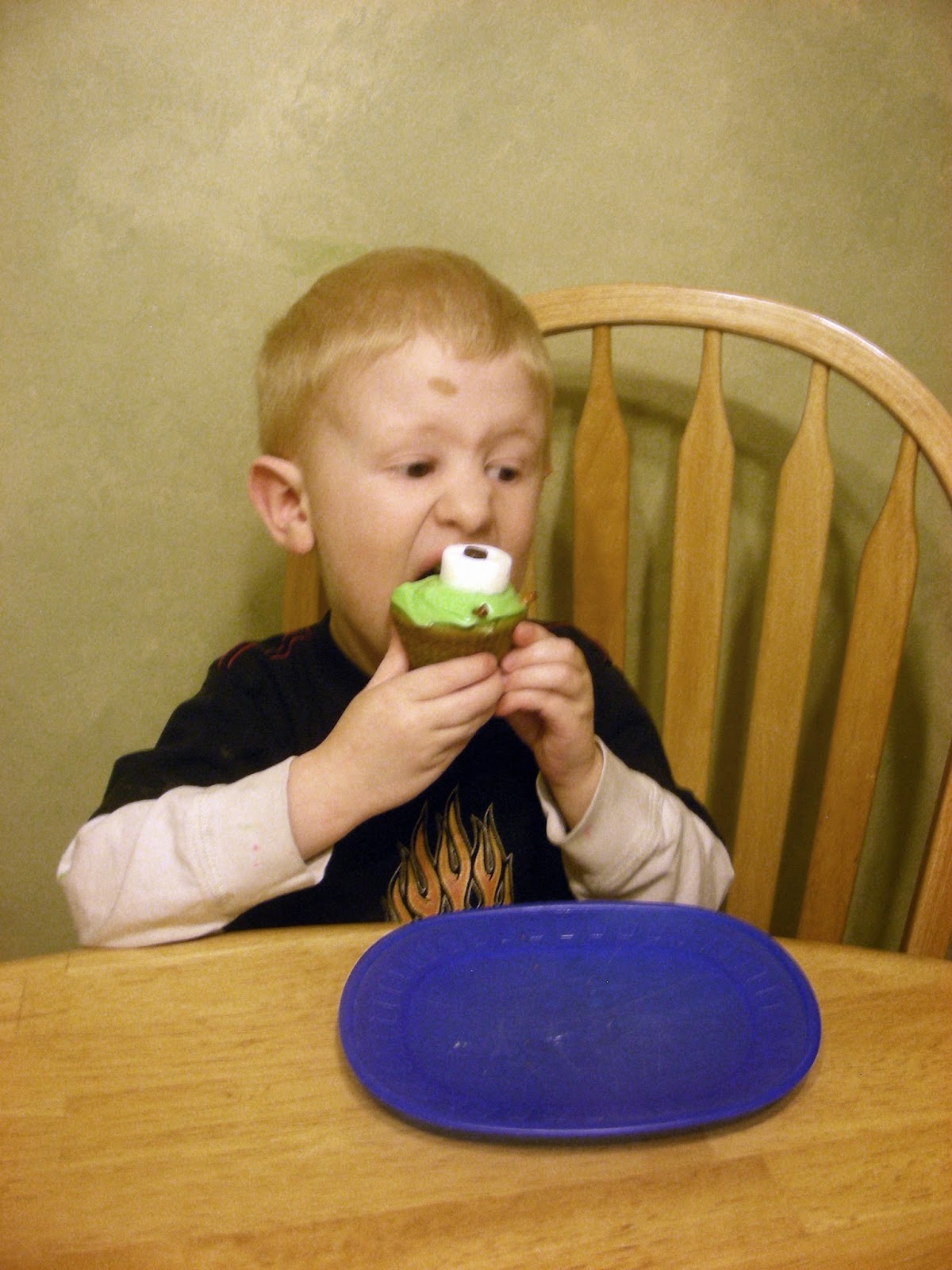 Logan enjoyed his cupcake too! He thought the eye was a pretty funny thing to put on top of a cupcake, but he liked them. 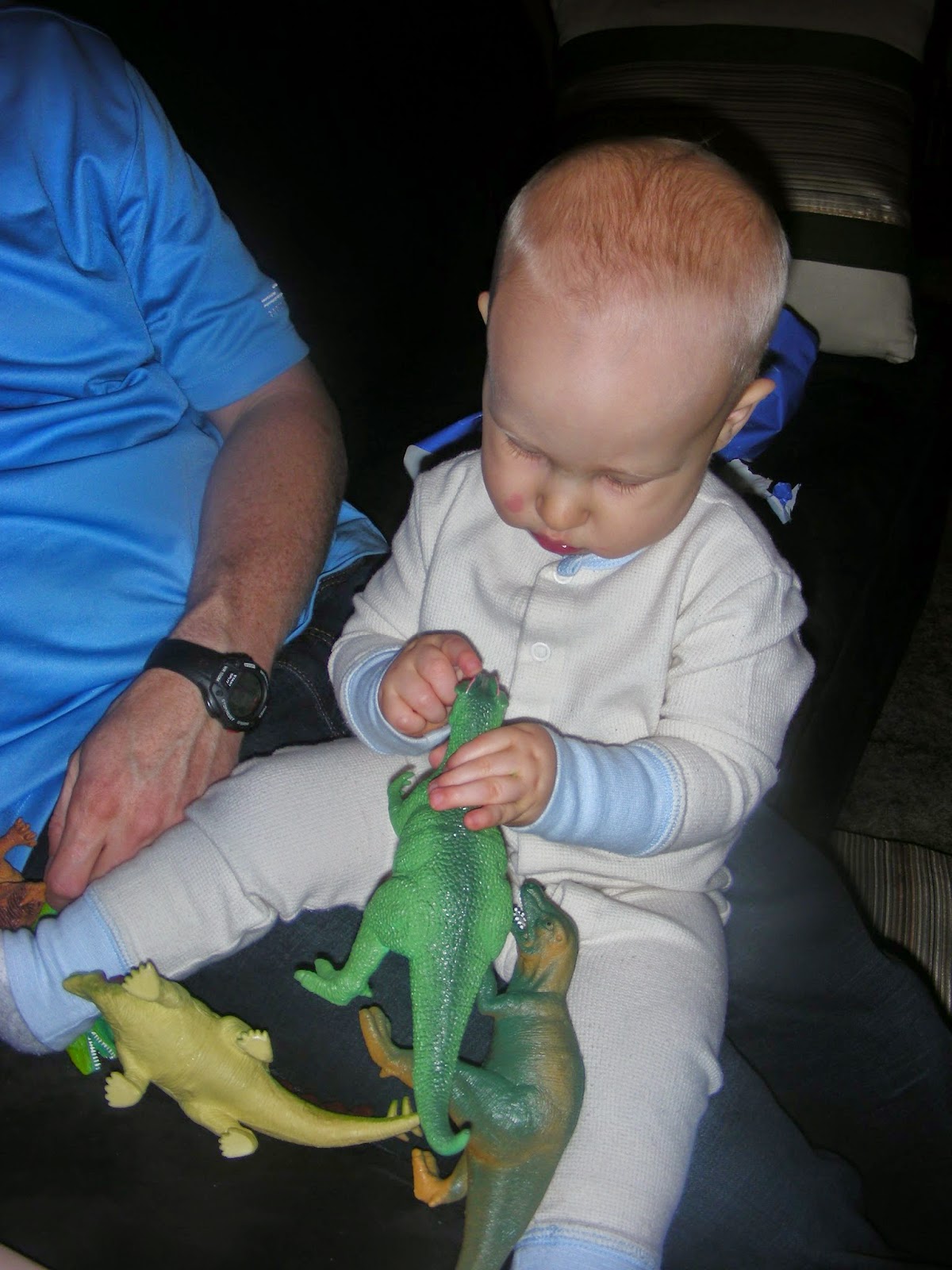 Then Dave and Logan pleaded with me to just open gifts too. I gave in and we did! Logan picked out a toy to give Dustin. He picked two dinosaurs (because just one would be lonely Mom). So Dustin opened them and we played with Logan and Dustin's dinosaurs. Dustin makes a pretty convincing RRRROOOOAAAARRRR!


Dustin opened and enjoyed all his gifts. We played and played until long past bedtime. For his actual birthday Dustin wanted cupcakes for breakfast, but I had to say no... It was so hard, but he settled on cereal, yogurt and grapes. He kept pointing to the cupcakes and making noise (good thing he doesn't know the word yet, or I would have caved). 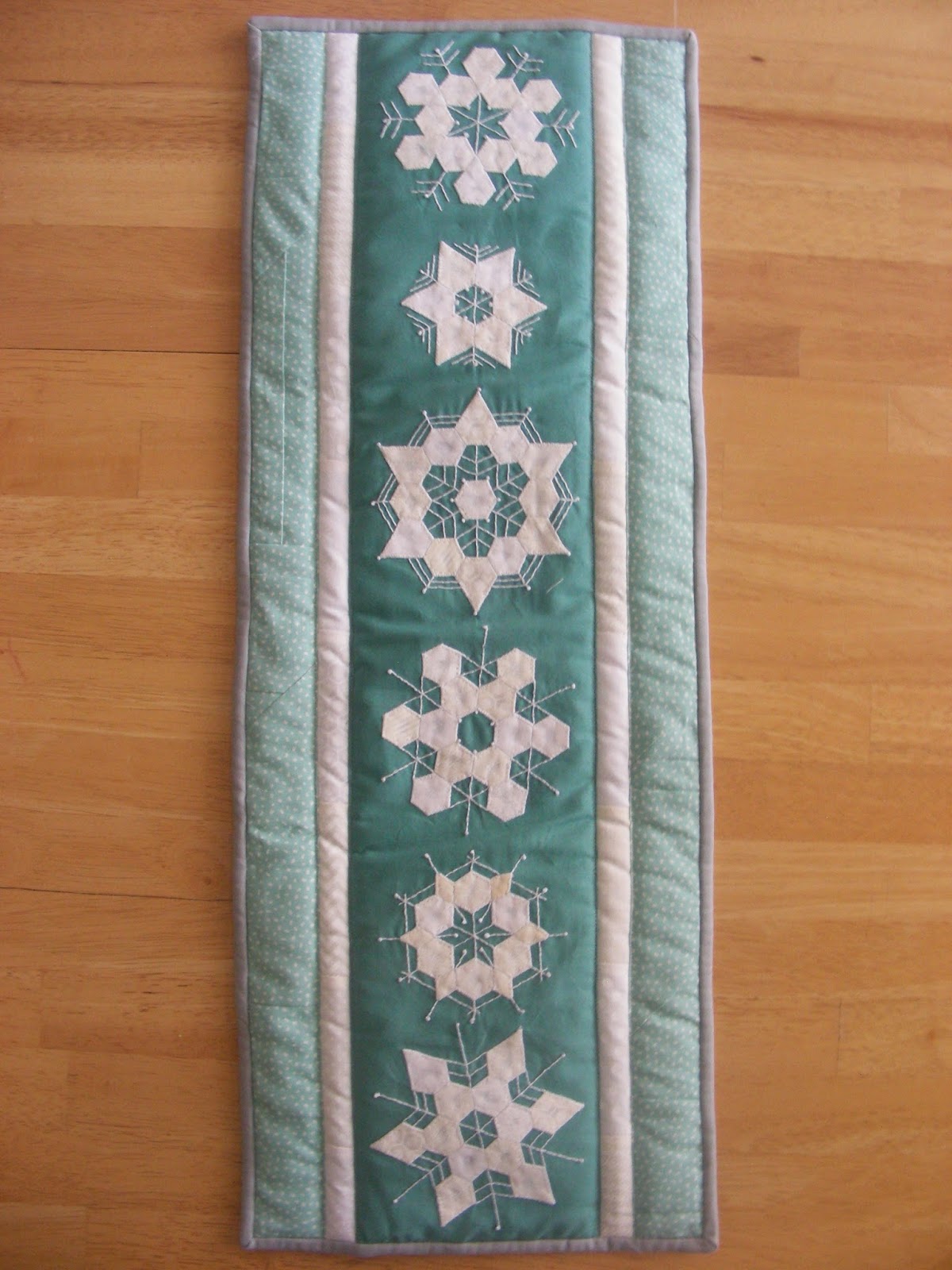 Oh man it's been a busy few weeks! Well, self inflicted busy, but still crazy! I've been trying to get everything done for Christmas before December so I can just relax and enjoy the season. I have been sewing and creating like crazy! But it's never ending, every time I finish a project, I come up with two more I just "have to make" for someone. We'll see if I actually get done by Christmas. If not, it's been fun sewing.

The other day Logan asked me "so Mom, what did you sew today?" um, nothing. We had run errands and baked all day. He asked "are you sure? You didn't sew anything?" Funny kid! He knows what's up.

Other than that, I've been toying with the idea of starting a new Christmas tradition it's called the Kindness Elf. It's similar to the elf on a shelf (hide an elf toy different places in the house every day in Dec), but it focuses on doing kind things for others.

So you might find your elf in the mixing bowl in the kitchen with a note that says "help me make a treat for a neighbor today!" But I don't know if I want to commit to 25 days of planning things, so I might try out the 12 days before Christmas and see how that goes. If we like it, we can plan more activities for next year (and I can recycle this years too). If we hate it, at least we got an elf toy out of it (another item to add to my sewing list...).
Posted by Amy at 1:57 PM