Two crazy but fun weeks! Two weeks ago Friday we did a family movie night. For us, this involves picking a kids movie to watch, and going to the Dollar Tree. Everyone gets a dollar to spend on whatever they want. Logan got Curious George fruit snacks, Dustin got a bouncy ball, I got peach rings, and Dave got liquorish. Peach rings have become my substitute for liquorish since going gluten free. It was a fun night!

Saturday we had a casual morning, and went to the park in the afternoon. It was so windy we ended up going back to the Dollar Tree and bought two kites to fly! Logan had so much fun watching his kite flying around. I think it's the first time we've done this with him.

That night the boys headed out to the church for our ward's Father Son activity. They had a fire at the church with S'mores and 7 different cobblers. They ate chips and pizza and played in the gym with the other kids! They had a fun time. I had my friend Tenille over. We went to Zupas and worked on sewing projects until the boys got home.

That Monday for FHE we had a lesson on the Word of Wisdom. This has had a huge effect on the way Logan eats. Now when we start eating he will ask "Are carrots/sandwiches/candy healthy?" and if it isn't he will respond "then we should only eat a little". Glad he got the point of that lesson! Sometimes I wonder, and he surprises me with what he picks up. Man, since we had a lesson on dental hygiene and cavities (a few weeks ago) we have had less problems with not wanting to brush teeth. 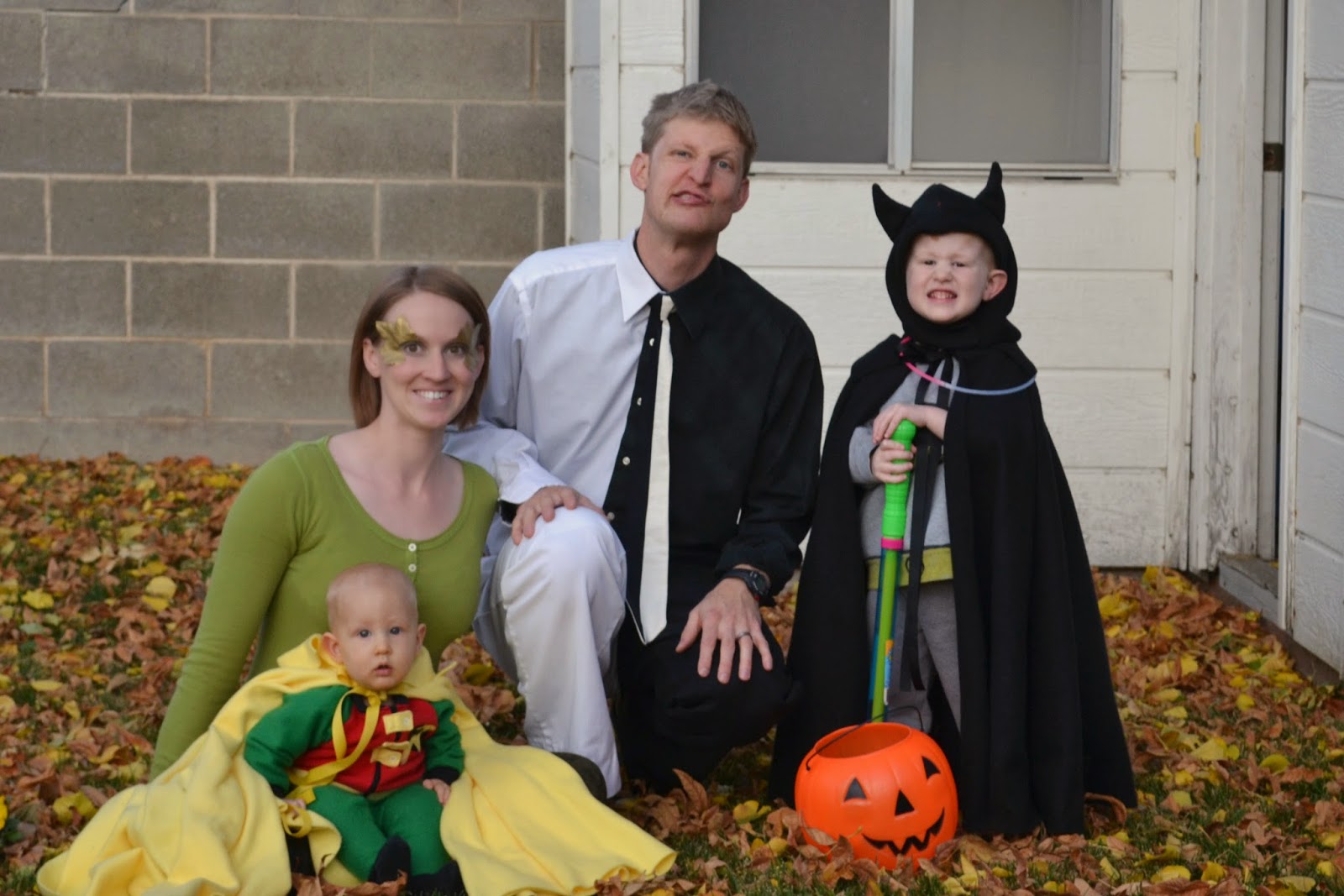 Last week was crazy Halloween prep! I was finishing sewing a tie for Dave's costume and a belt and "mask" for my costume. They all turned out well, although Logan didn't want pictures! He's been against them since our family photo shoot. 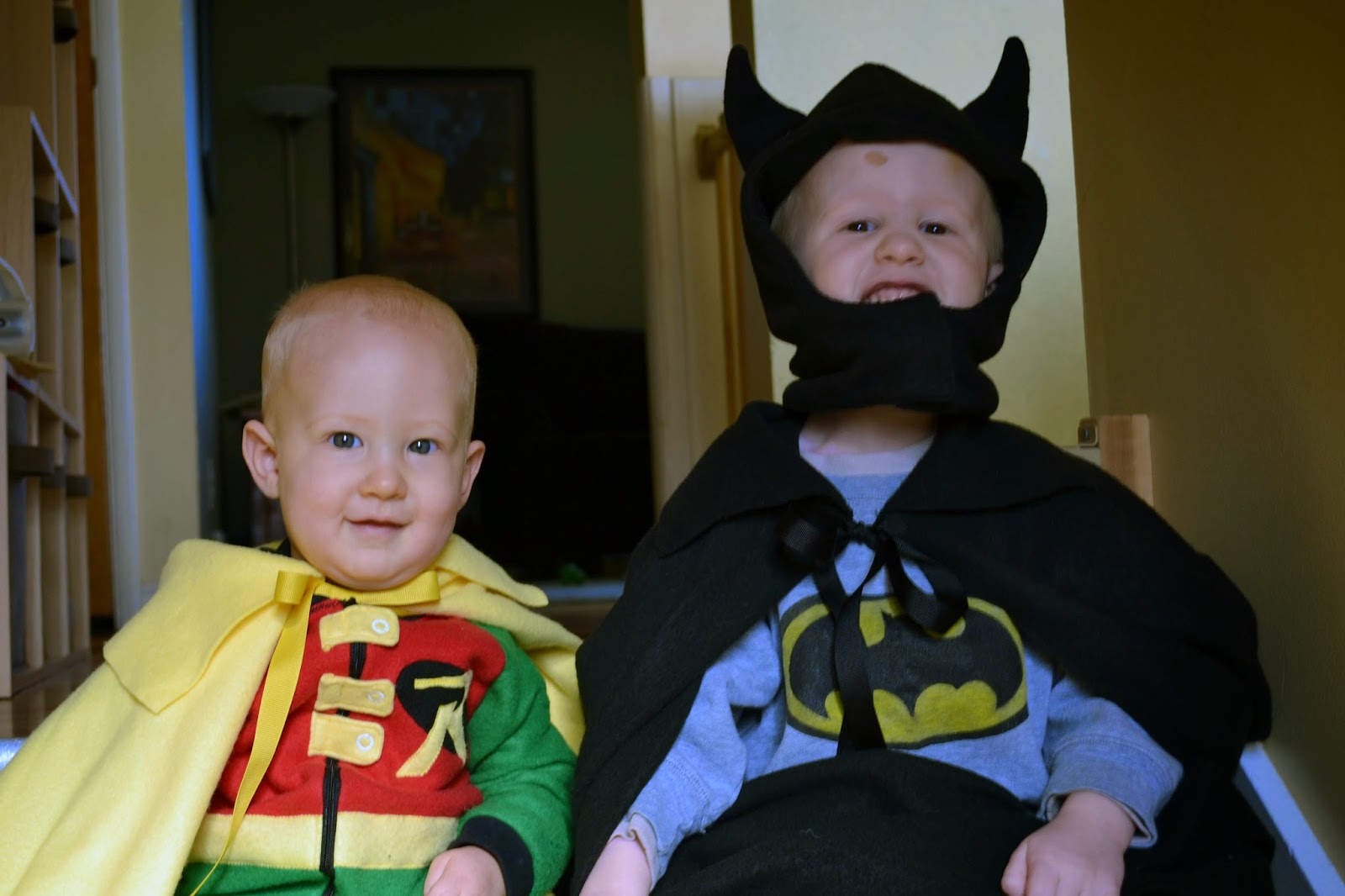 So this is the best I could do. I probably tried to get pictures 8 times of these two. Since Logan's room is a super hero room, I thought it would be adorable to blow up a picture of these two and hang it on the wall. We'll see if I can get Dave to do some editing and make these blowup-able. 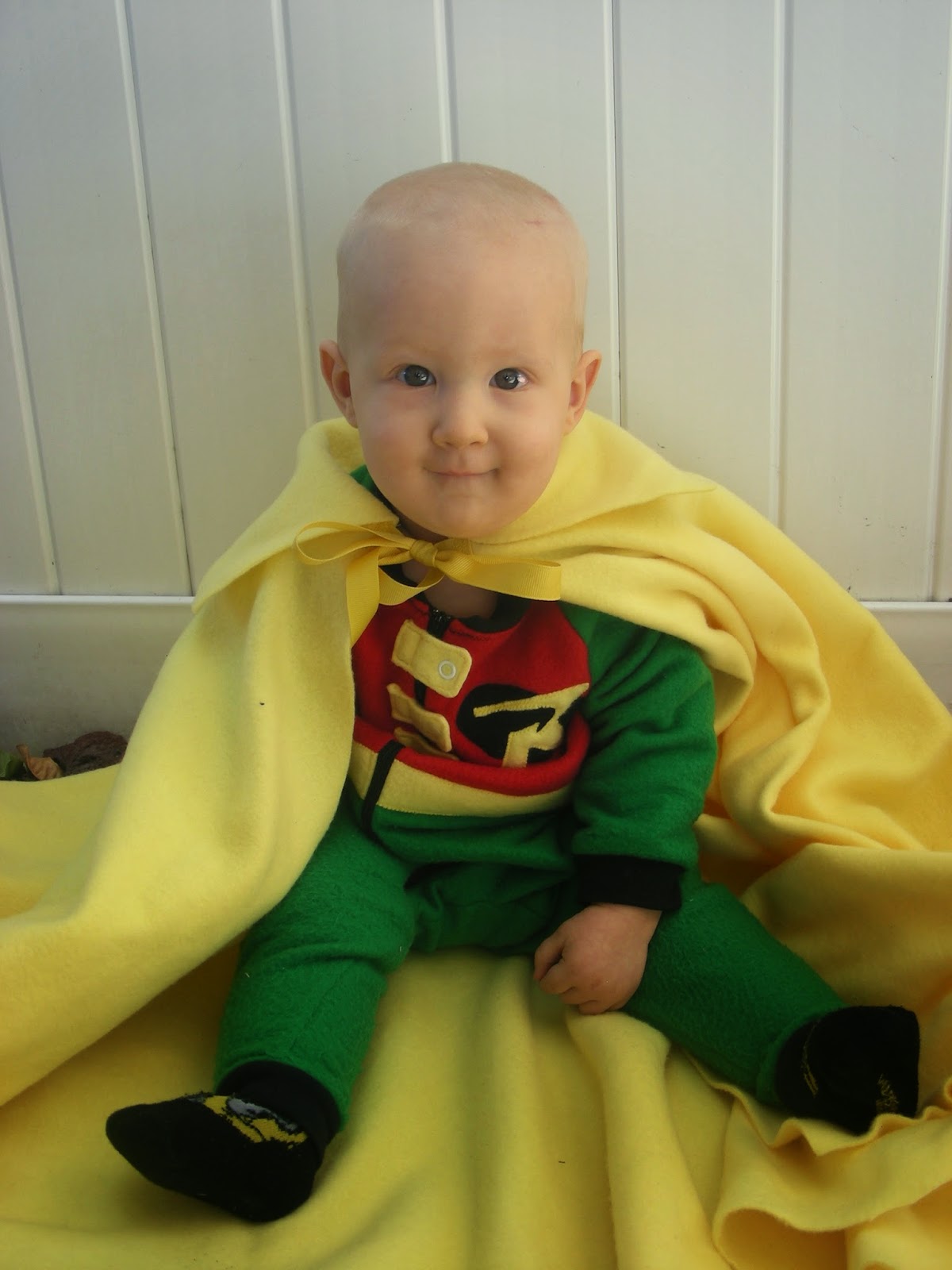 Dustin cooperated! He makes the cutest little side kick! 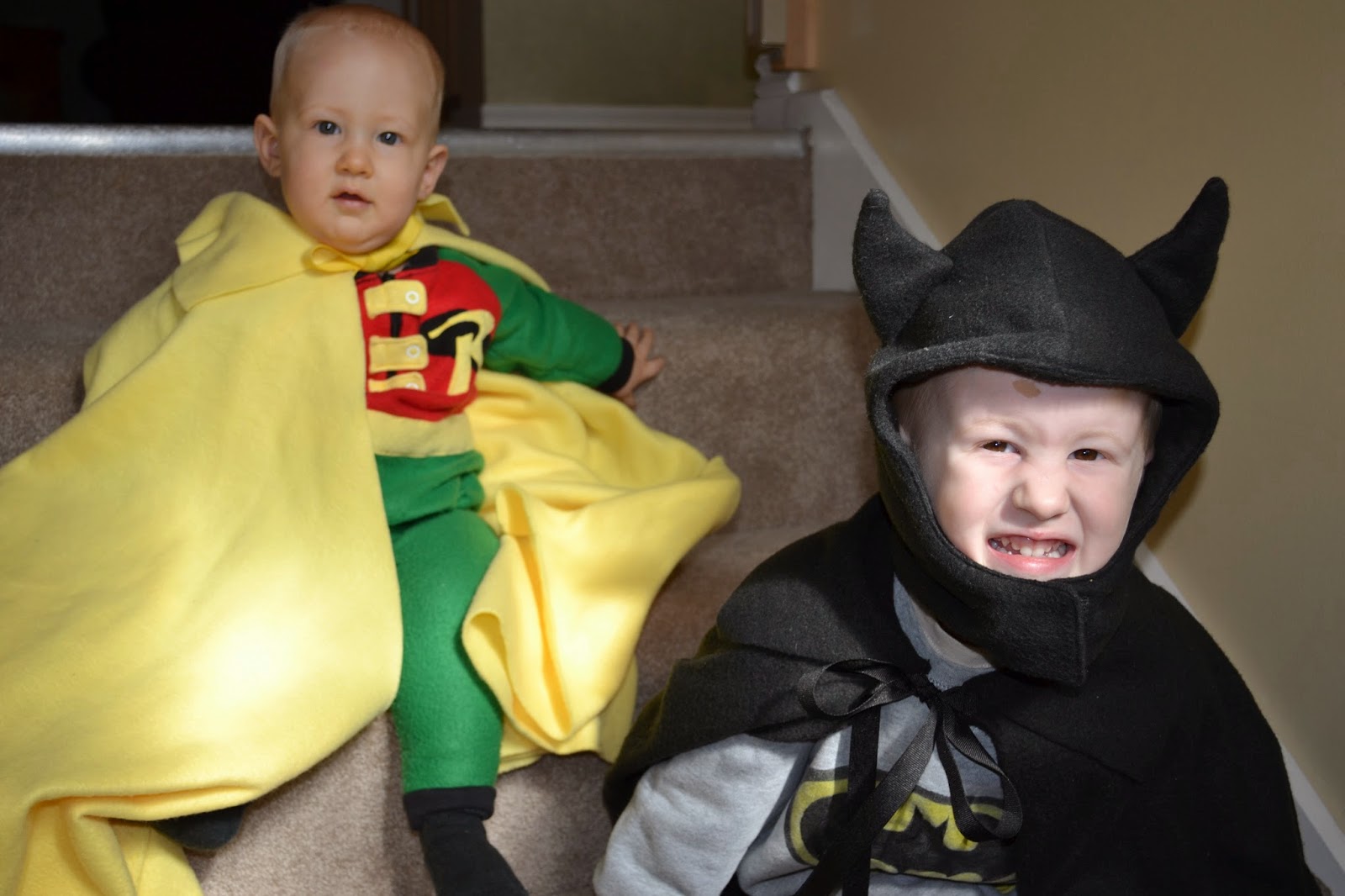 The lighting of this one is awful, but I love how Dustin looks like he has Logan's back! 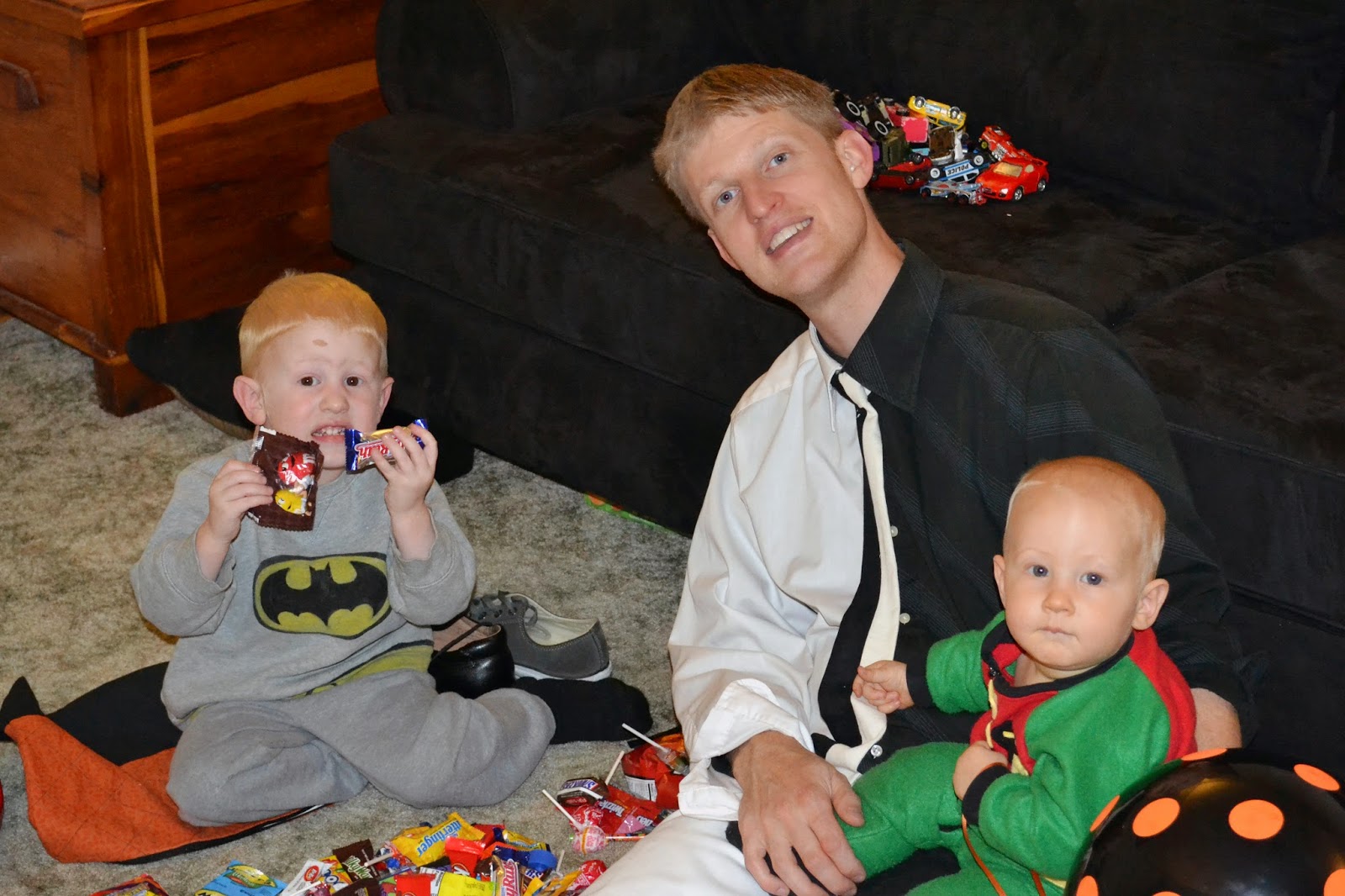 The boys and their candy haul. We only went out for an hour, and a lot of that was spent chatting with people from the ward. So we didn't end up with too much. All three boys were feeling under the weather, although Logan was begging to go trick or treating again an hour after we got home. 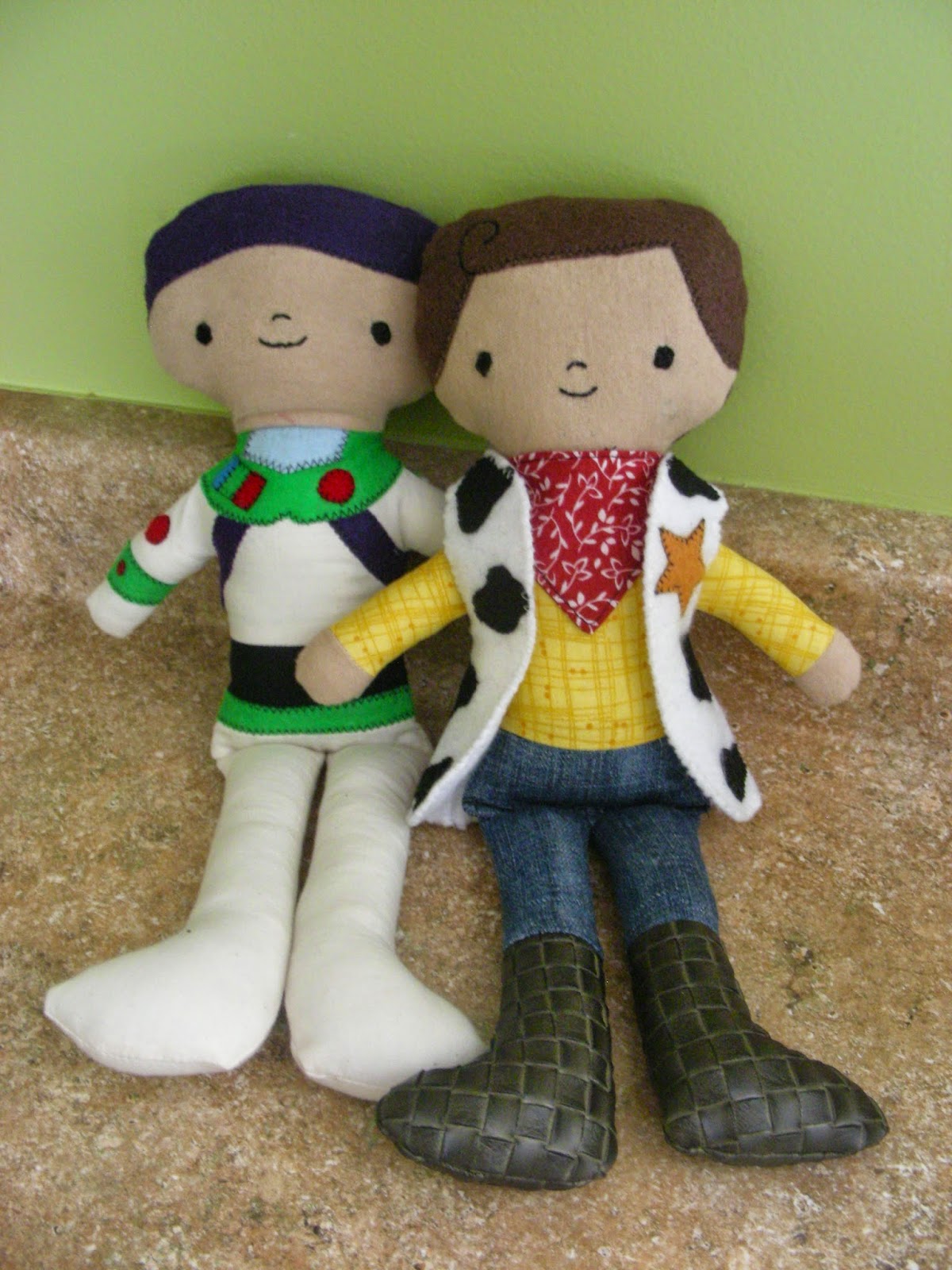 I also started my Christmas sewing! I think we're done buying the boys gifts. We aren't doing a big gift year this year (we're saving up for a trip to the Outer Banks next summer), so I decided to supplement our purchased gifts with some home made ones. Everything from these gifts were out of my material stash, so "free"! Dustin will get Buzz Lightyear and Woody. 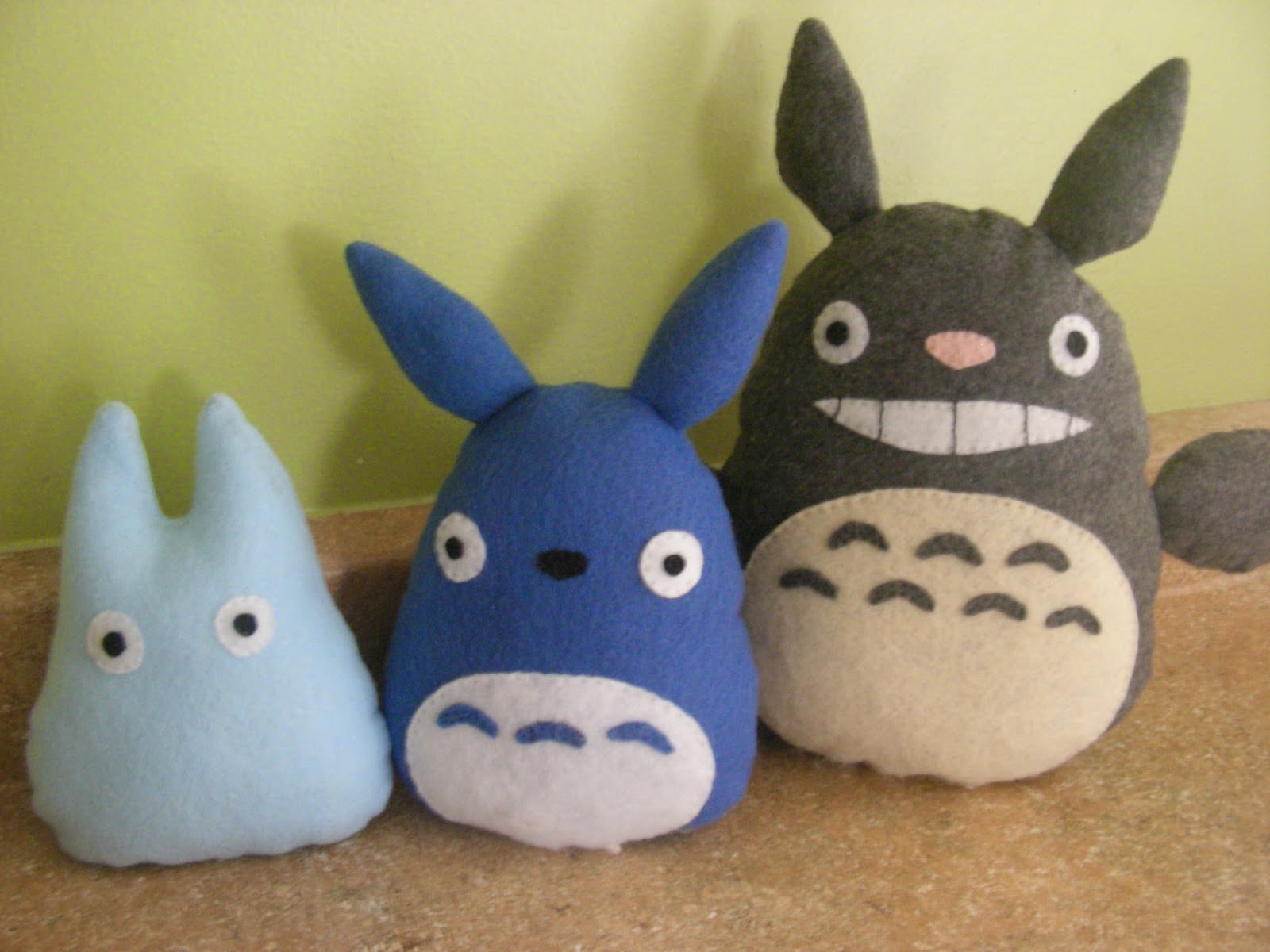 Logan will get these three Totoros. Every time he watches the movie he asks me to make him a Totoro toy. So I've been saving this idea for Christmas. And he will LOVE how they turned out! When he gets them. I was cutting out the pieces and he was in the room. He asked "Oh Mom, are you finally making me a Totoro?!?" Sigh... so much for surprise.

Other than that, we're hanging in there! The boys are pretty much over their sickness, and Dave is on the upturn. Fortunately I didn't get it, so we're good there!
Posted by Amy at 11:50 AM