It's finally spring!!! We had a ton of rain over the past few weeks. It's good but hard to keep the kids inside (it's warm so they want to be outside). Our flowers are finally blooming which means it's spring photo shoot time! The kids have been less than co-operative this year and every time I took pictures it's ended in tears. I'm afraid this is the best I'll be able to do this year. 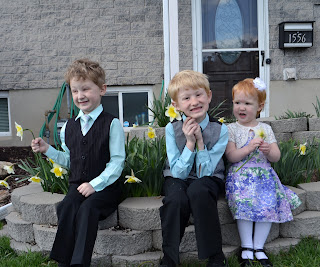 Logan's looking at the camera but everyone's smiling! So this is probably the best picture. Last year I bought Easter clothes a size bigger then I hemmed up the boys pants. This year everyone still fits (now that the pants are un-hemmed). So I'll call this a win in the fancy clothing category. 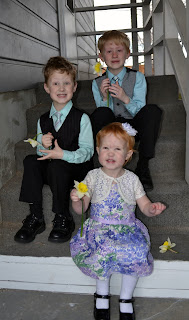 This is a pretty decent picture too. So I have at least one to hang on the wall. 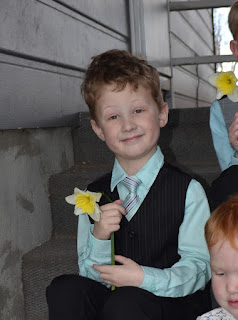 Here's Dustin's best shot! He hams it up in a lot of them, but this one turned out pretty sweet 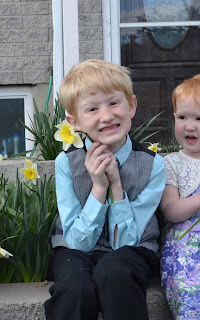 And here's Logan's. He went down hill fast and ended up crying because pictures suck. 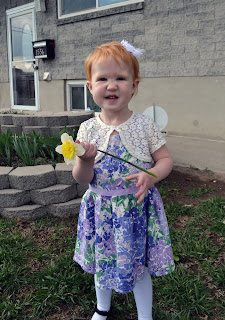 This little girl has given us a run for our money lately. She's so stinking cute but so stubborn! She wants what she wants and knows it! 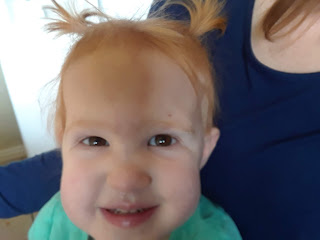 An example? These are Brooklyn's first piggy tails. She refused to let me do her hair before this. Even as a baby she would immediately pull everything out of her hair. 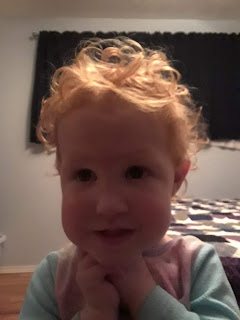 And her hair is starting to be curly like Dustin's! When we bathe her if we do nothing to it she looks like this. But we usually brush it down after bath so she doesn't end up with wild hair the next morning. I think when it gets longer the curls will be subtle and cute. Or at least wavy. 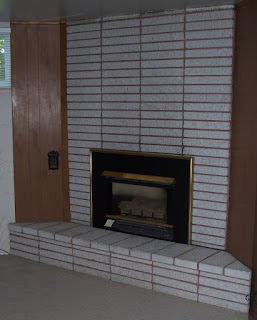 One project that has been such a slow process is the fireplace. When we moved in we removed the wood paneling and painted. A few years ago Dave made a mantle for me. Now I've painted the gold a black which I like a lot better! 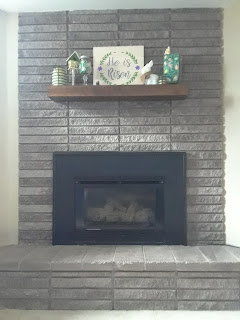 The last thing I need to do in the house is paint the hallway/entryway/stairs. The woman that owned the house before us LOVED yellow. I hate yellow walls so we've been slowly painting everything. The hallway is the last yellow and I'm ready for a change. Although I don't know what color yet (maybe a grey, blue, or green shade). I've recently moved the kids bedroom laundry baskets to one big one in the hallway. I would prefer them have ones in their rooms but this one actually gets used so less cleaning up/nagging for me.

Sadly Dave wants to replace the light in the hallway, patch up  and paint the ceiling before we tackle the walls. Which probably means we should replace the front entry light as well and redo the hallway wiring while we're at it. So it's going to be a little more work than me grabbing a can of paint at Lowe's. 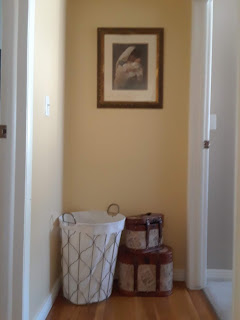 We've decided to be scared of bugs lately. Brooklyn is now terrified of ants. It's pretty tough going outside when everything little and black makes her scream. Once she discovers it's not an ant she's fine but until then even a black fuzzy is pretty much the end of the world. Dustin read one of Logan's school library books on Spiders and has decided he is now terrified of spiders. The saddest thing is the book was supposed to help kids overcome fears of spiders. But Dustin didn't know there were poisonous spiders that could kill you until we read the book. Now he knows and is scared every spider is the poisonous kind. So one of our spring goals is to get over this. We've been collecting bugs in a bug box and observing them so maybe this will help.

Other than this I've been re-organizing all our photos. I took them all out and have gotten rid of quite a few (almost done sorting). Next I will put them all back in and print out the last year so we are up to date. The kids love looking at our pictures and it will be good to have this project done so they can enjoy them again.
Posted by Amy at 4:23 PM