Dave is officially a graduated man! He finished all his classes about a week ago, and last Friday it became official. It's been a lot of work, but I'm so glad it's over. One of us has been in school since we were married, so it's so nice to have nights to focus on our little family!

Dave did take a few days off work to relax, unwind, and finish up his portfolio. We did some heavy yard work as well as got in a few bike rides and a hike to Doughnut Falls. It was nice to have a break, but it's time to start the job hunt. 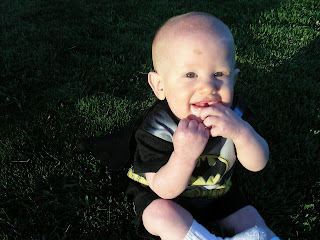 It's been also been a rough week in the Plastow home! Logan's been teething again, and He is one ornery boy. After babysitting him last Saturday my Mom decided he's getting 3 teeth at once, and that's what's causing the hubbub. He's gnawing on everything! I can't even get a picture of him without at least one finger in his mouth.

He's also getting so big; these jammies are 12 months old! I got him a pair of these and a Spiderman pair from Walmart for the summer. Dave now loves putting Logan to bed at night.

I should be getting a new calling in a few weeks, and I've started trying to prepare for it. It's totally different than teaching Gospel Doctrine. It's been a good calling for the past 3 years, and I'm trying to get excited for the next one. As soon as I'm called, I'll start some new projects.
Posted by Amy at 3:31 PM